We've long suspected the Terracotta Army is fake. On the internet there is an absence of scientific material about the army from any source other than China. 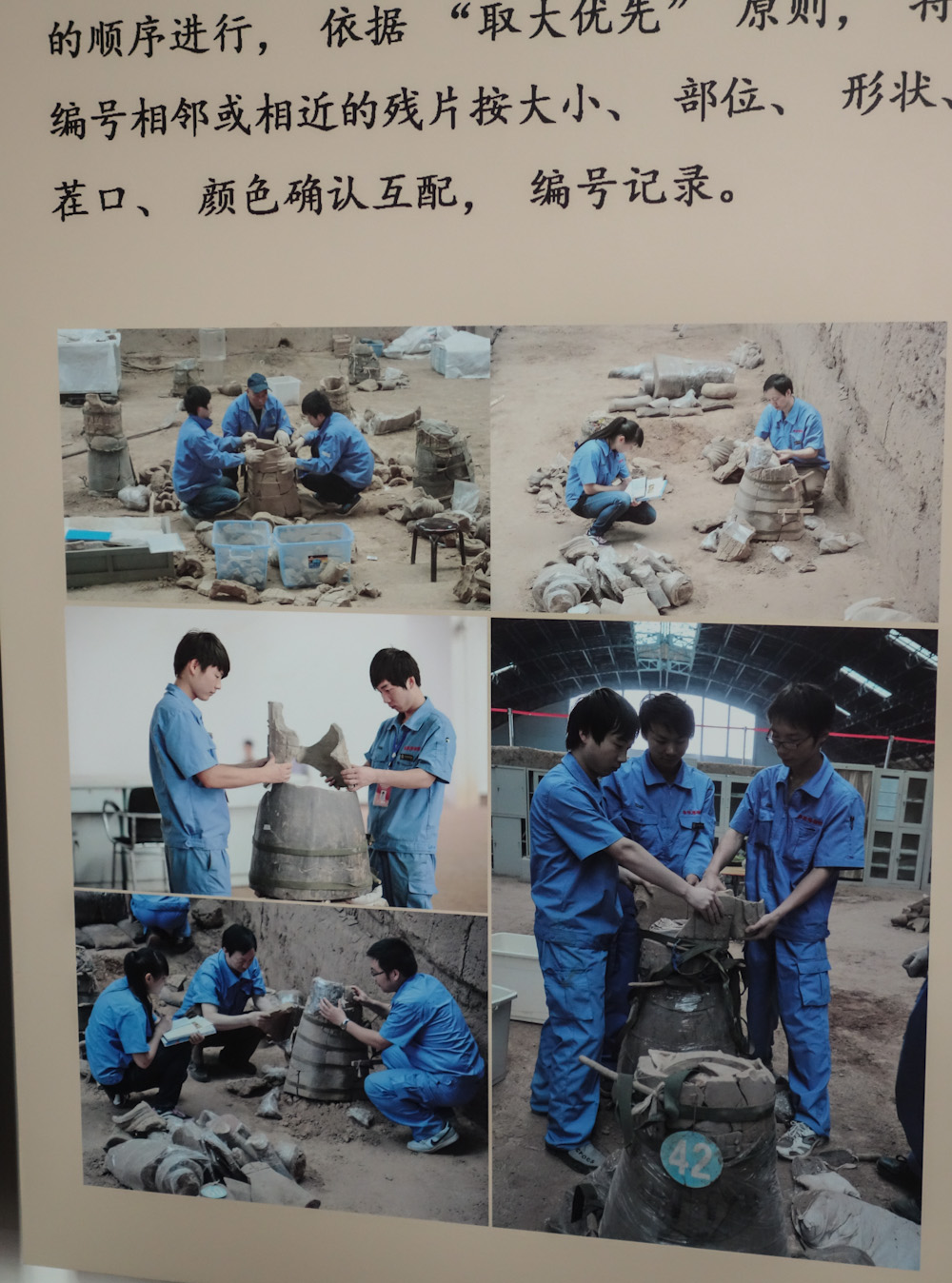 The walls of the hangar covering the Pit No.1 are covered with images of Chinese "scientists" in various stages of unearthing and assembling. 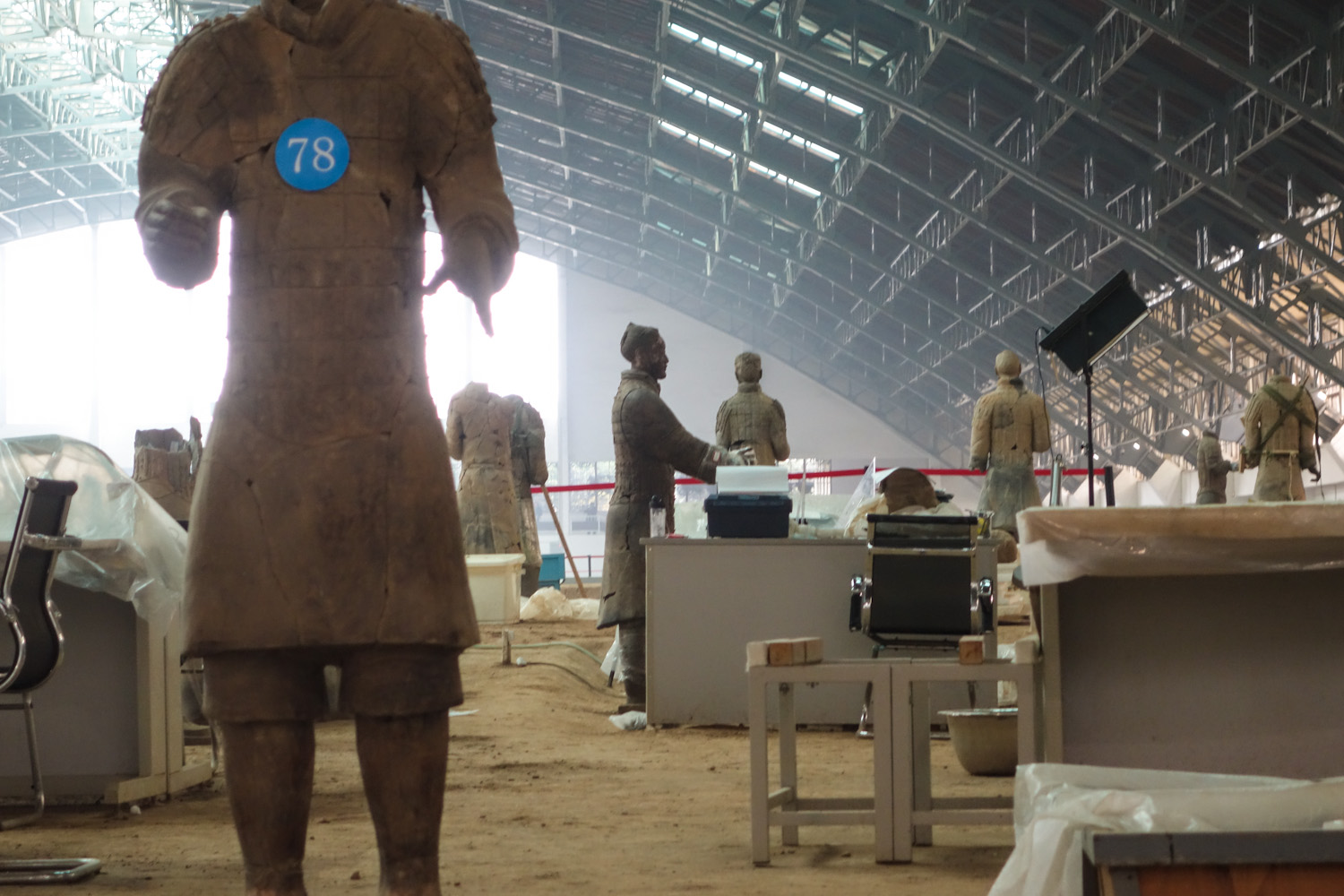 In reality, the site looks like a theater set for an archaeological site, not a real excavation. 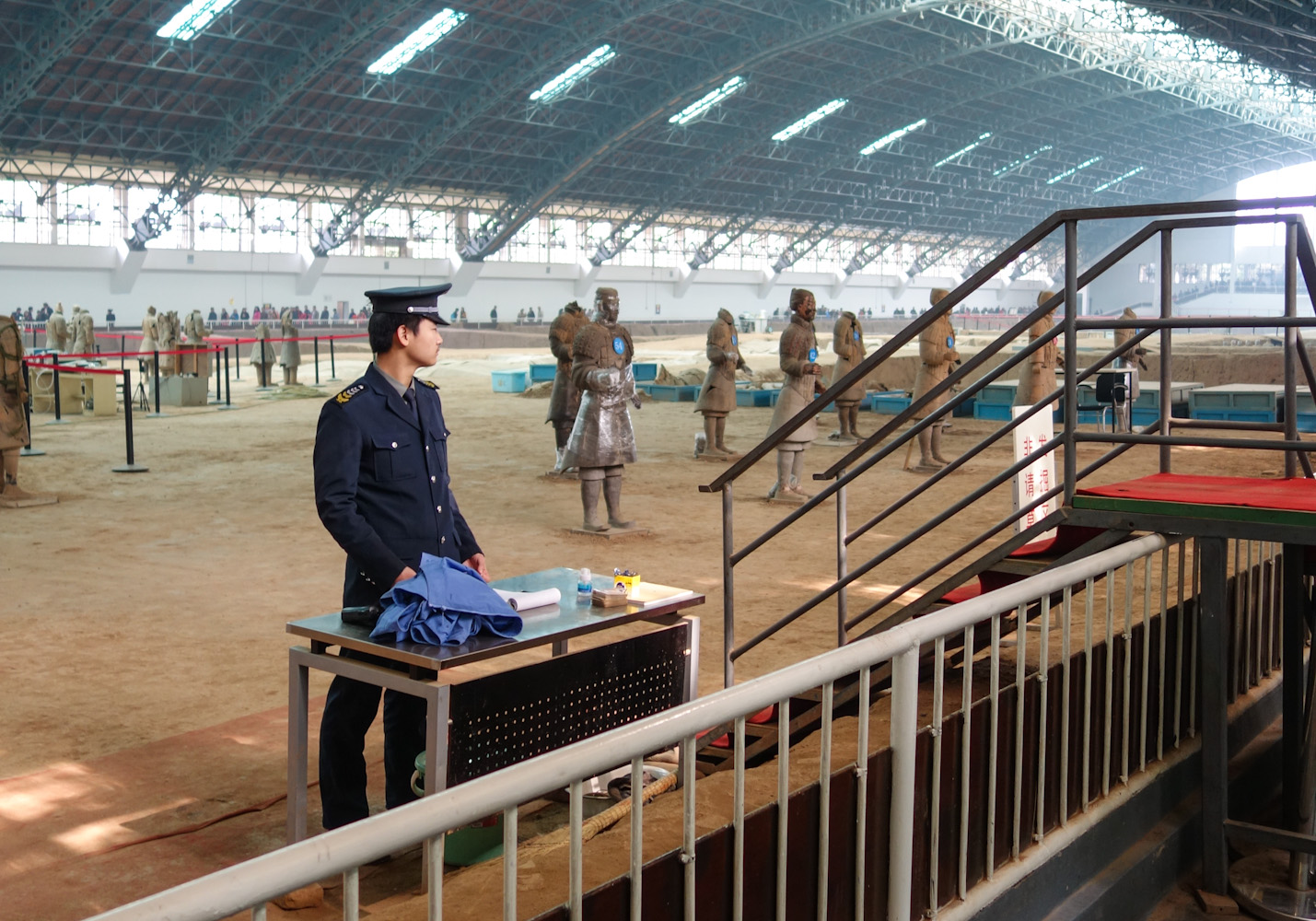 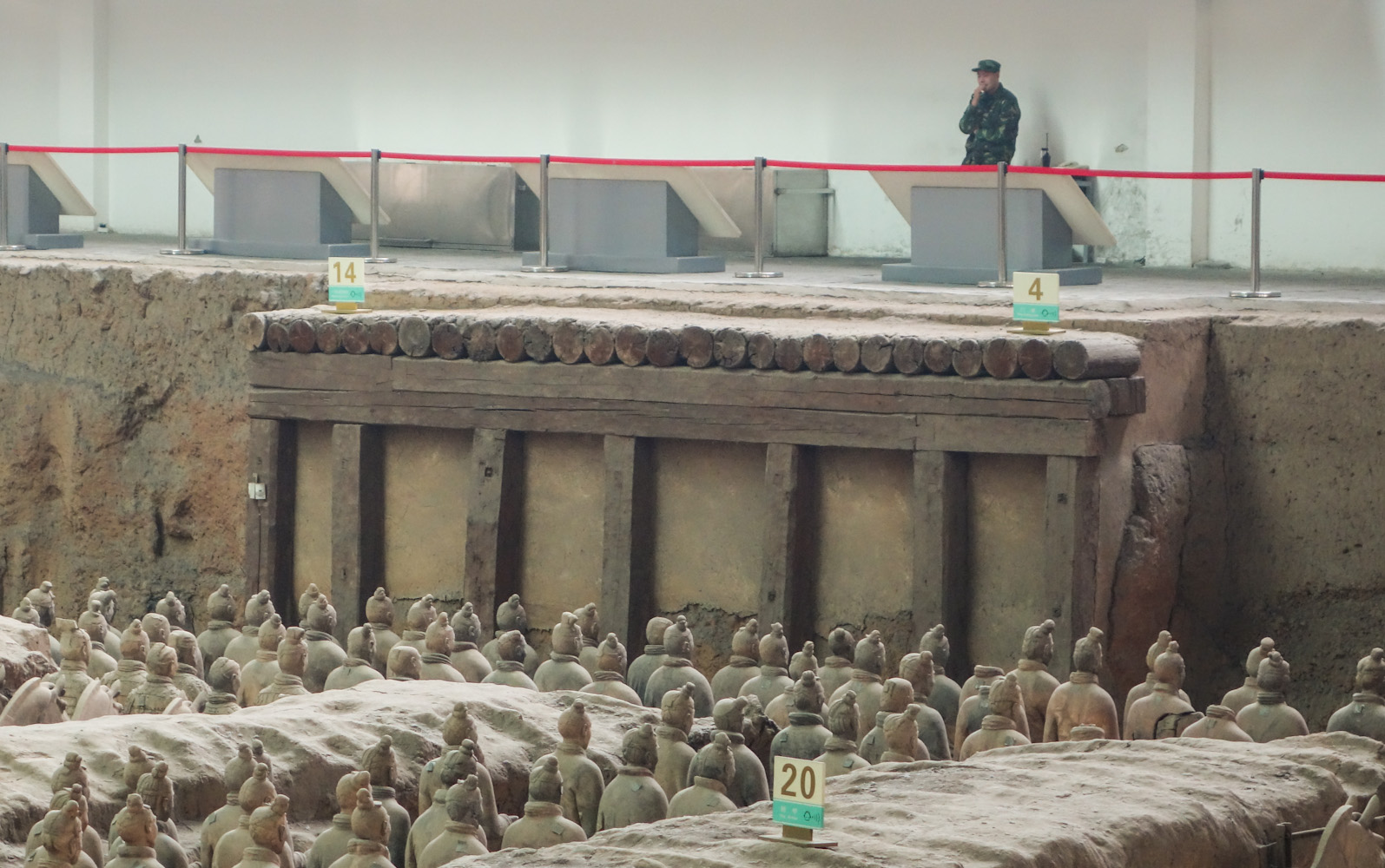 The army men guarding the site had no idea of the archaeologists work schedule. 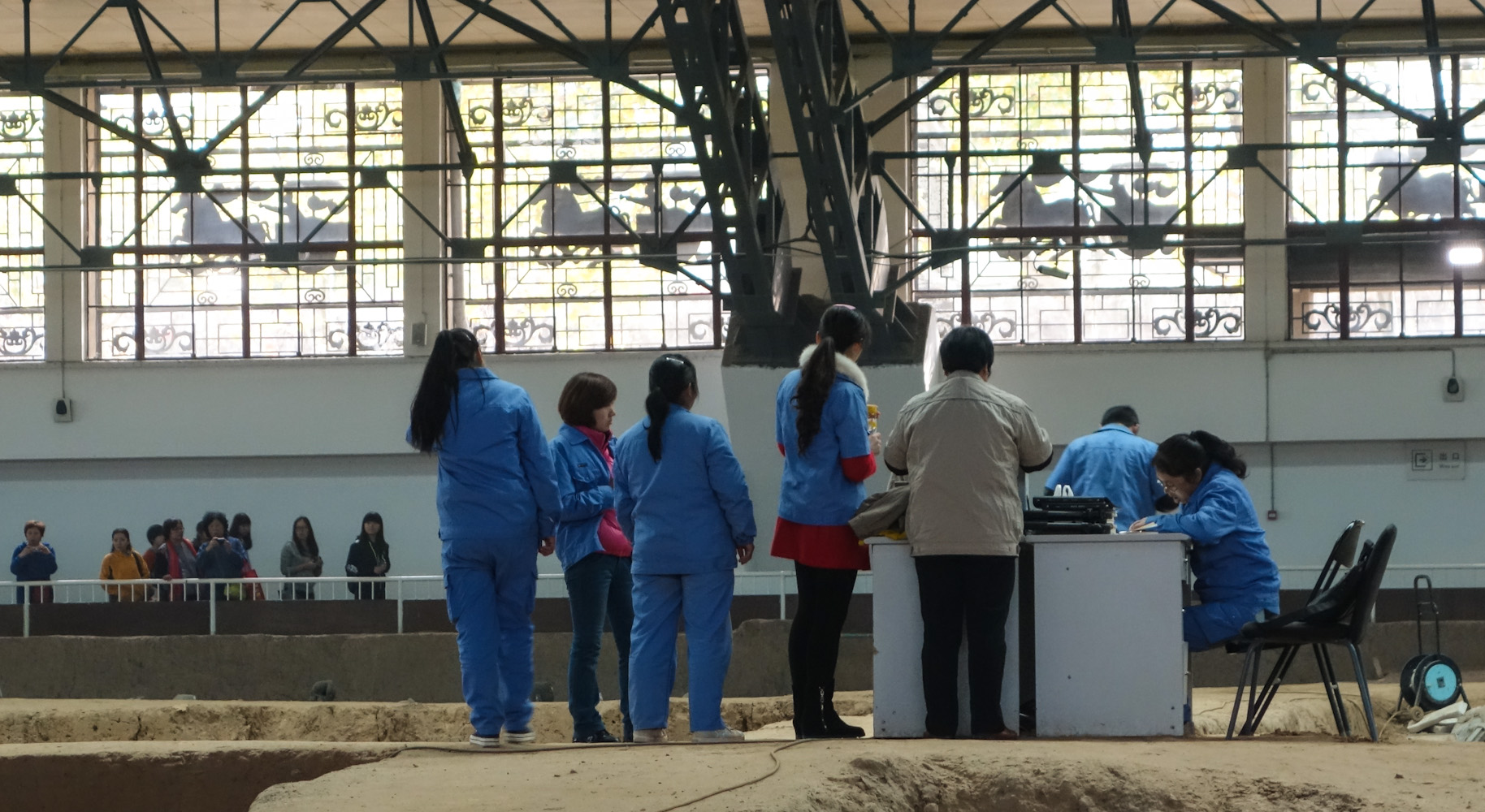 After 2 pm a group of "archaeologists" finally appeared. 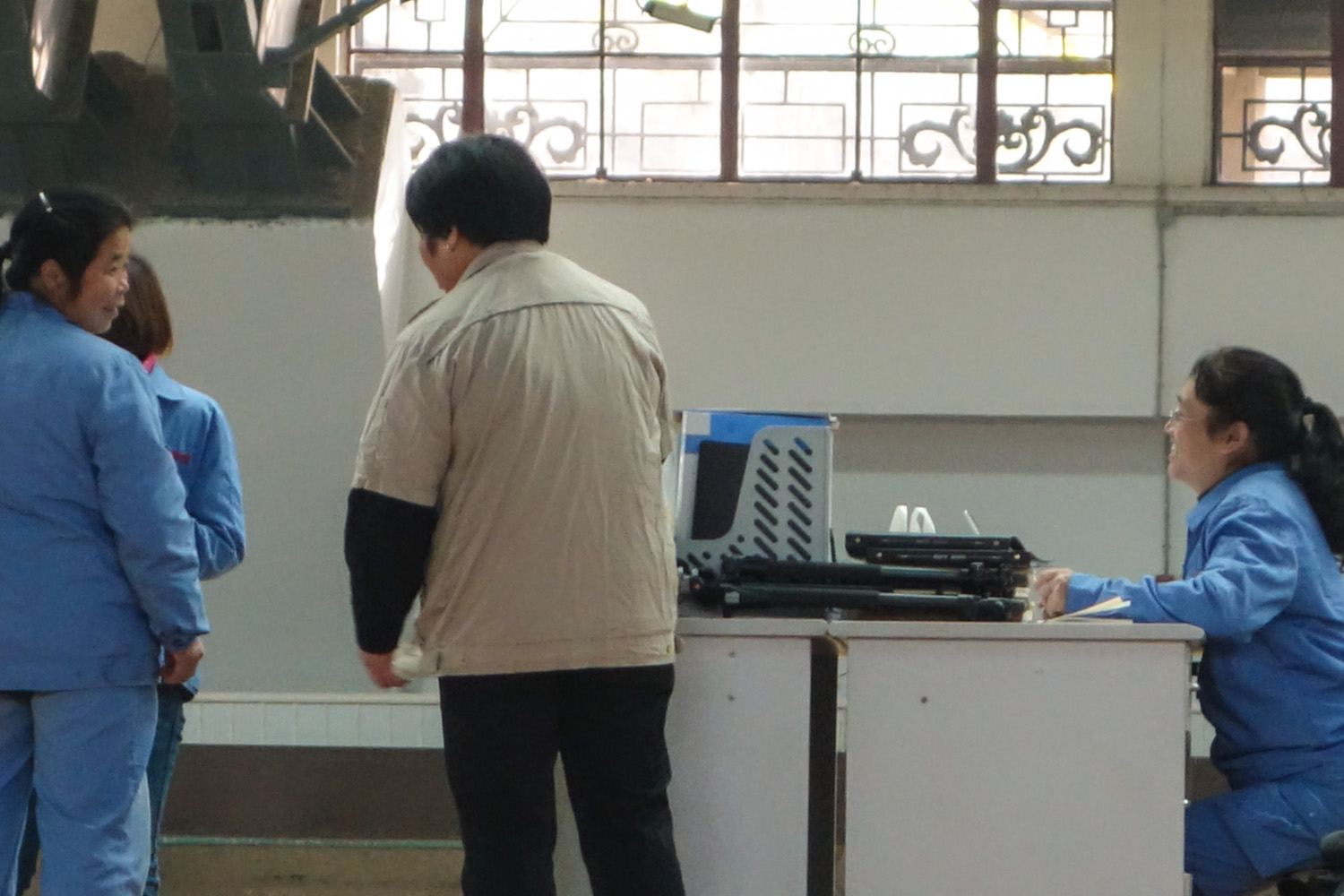 The women scientists looked like sturdy countrywomen and cleaning ladies. 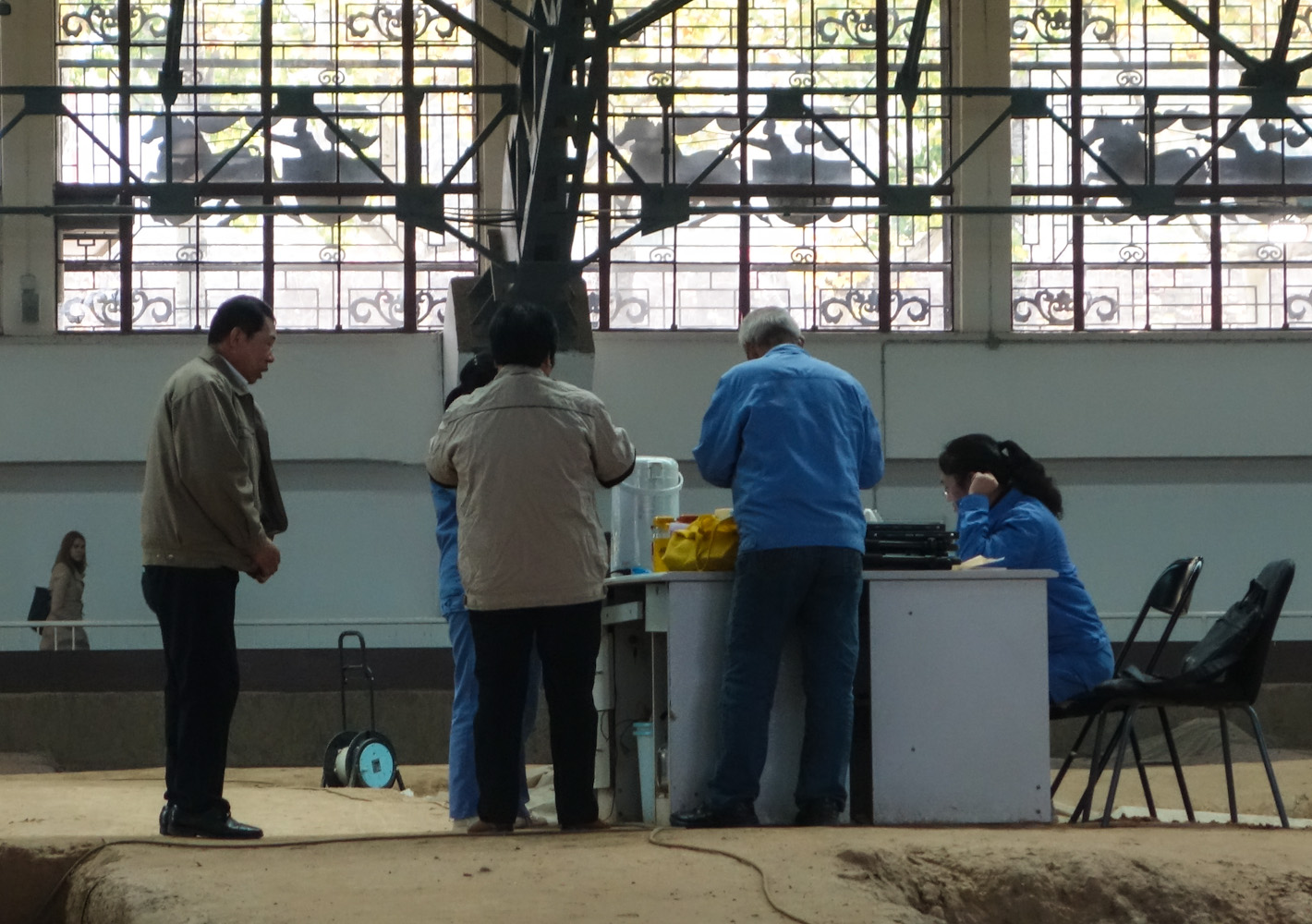 The men could be confused with drivers or doormen. 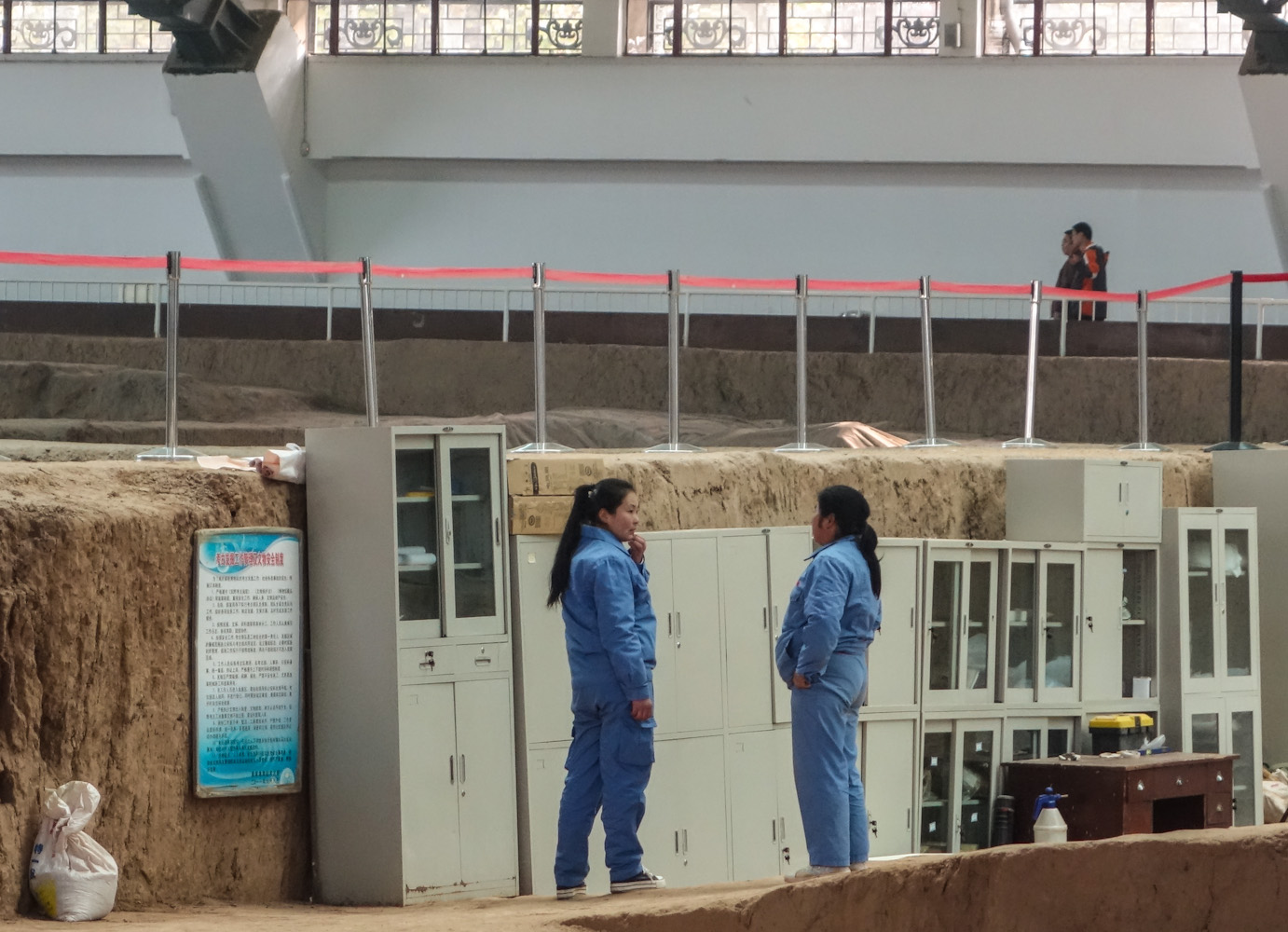 Two "scientists" undertook a long walk along the ramp between the excavation chambers. 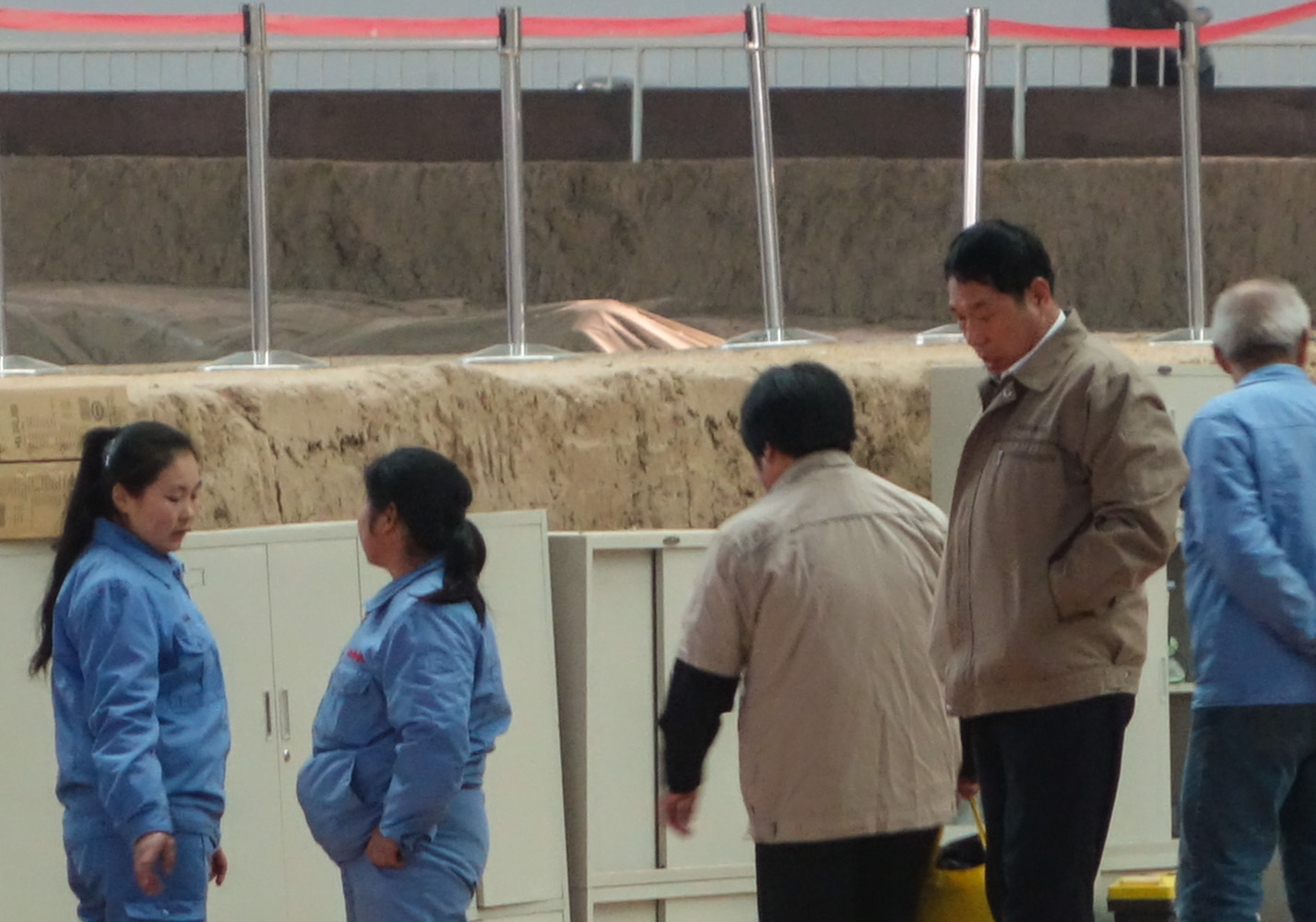 The archaeologists hid their hands and avoided meeting each others' eye while they loitered by the lockers for about thirty minutes. 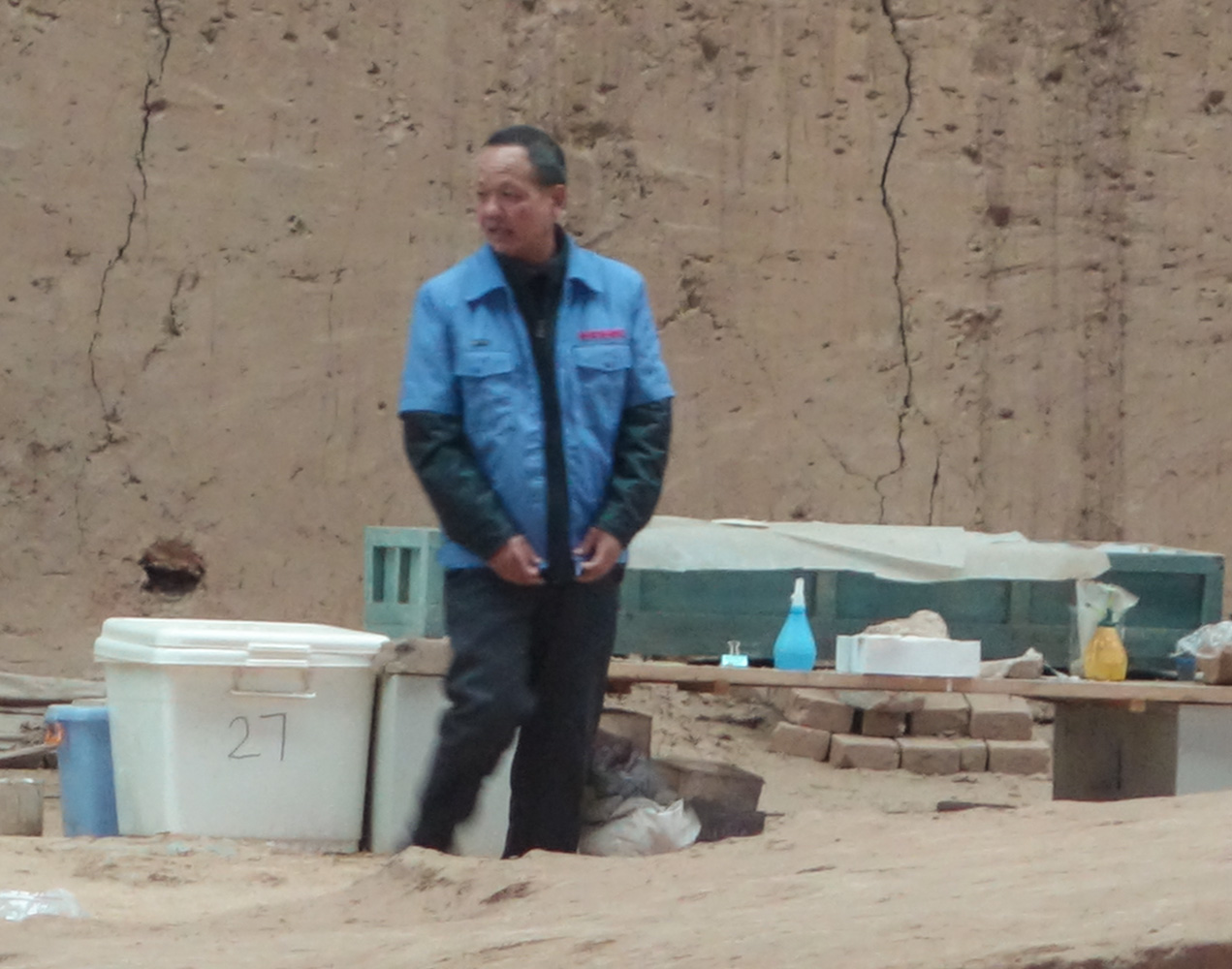 One scientist appeared busy by constantly taking off, folding and putting on his work jacket. 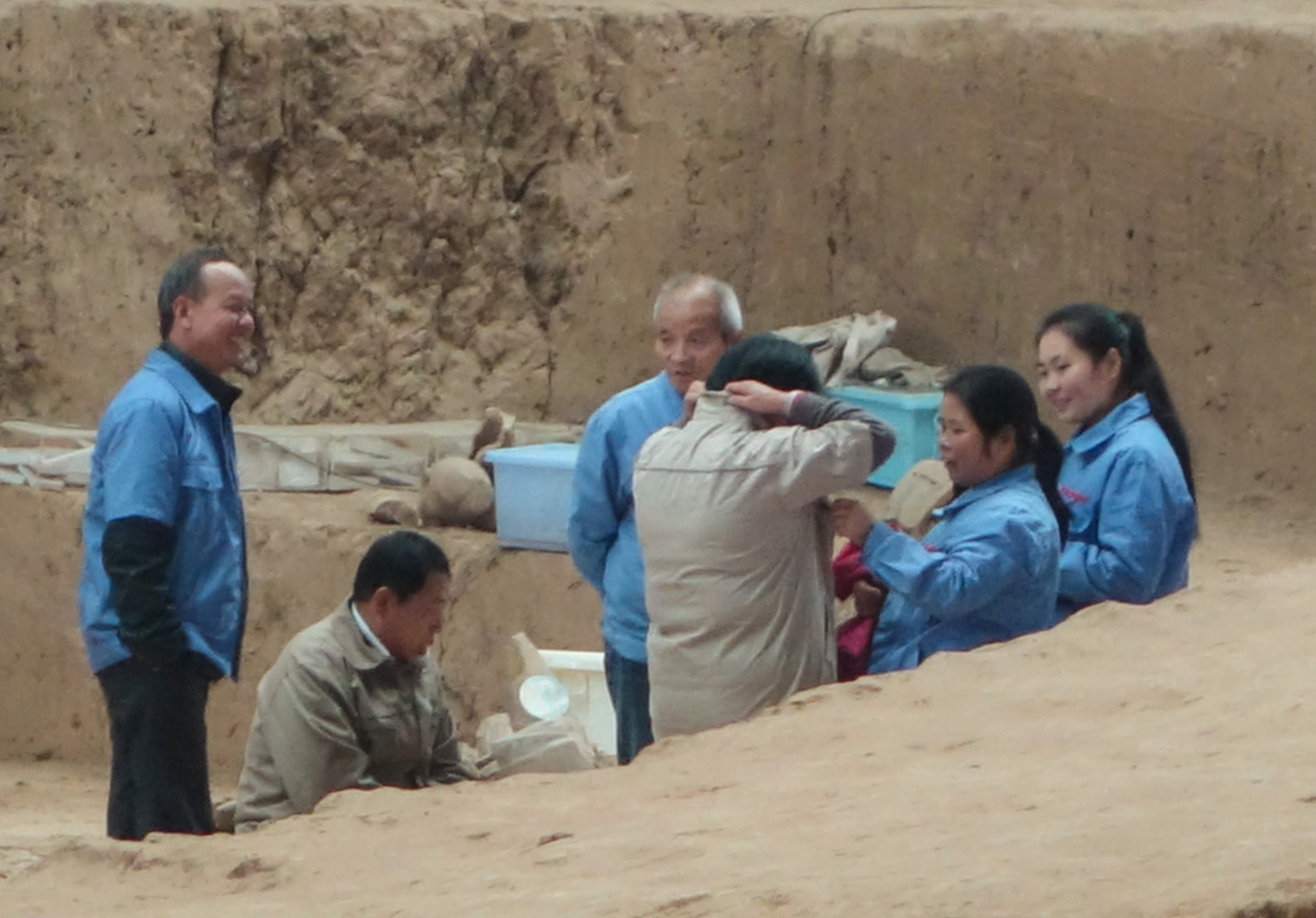 Another scientist began to have trouble with her jacket. Soon the whole brigade was helping her. 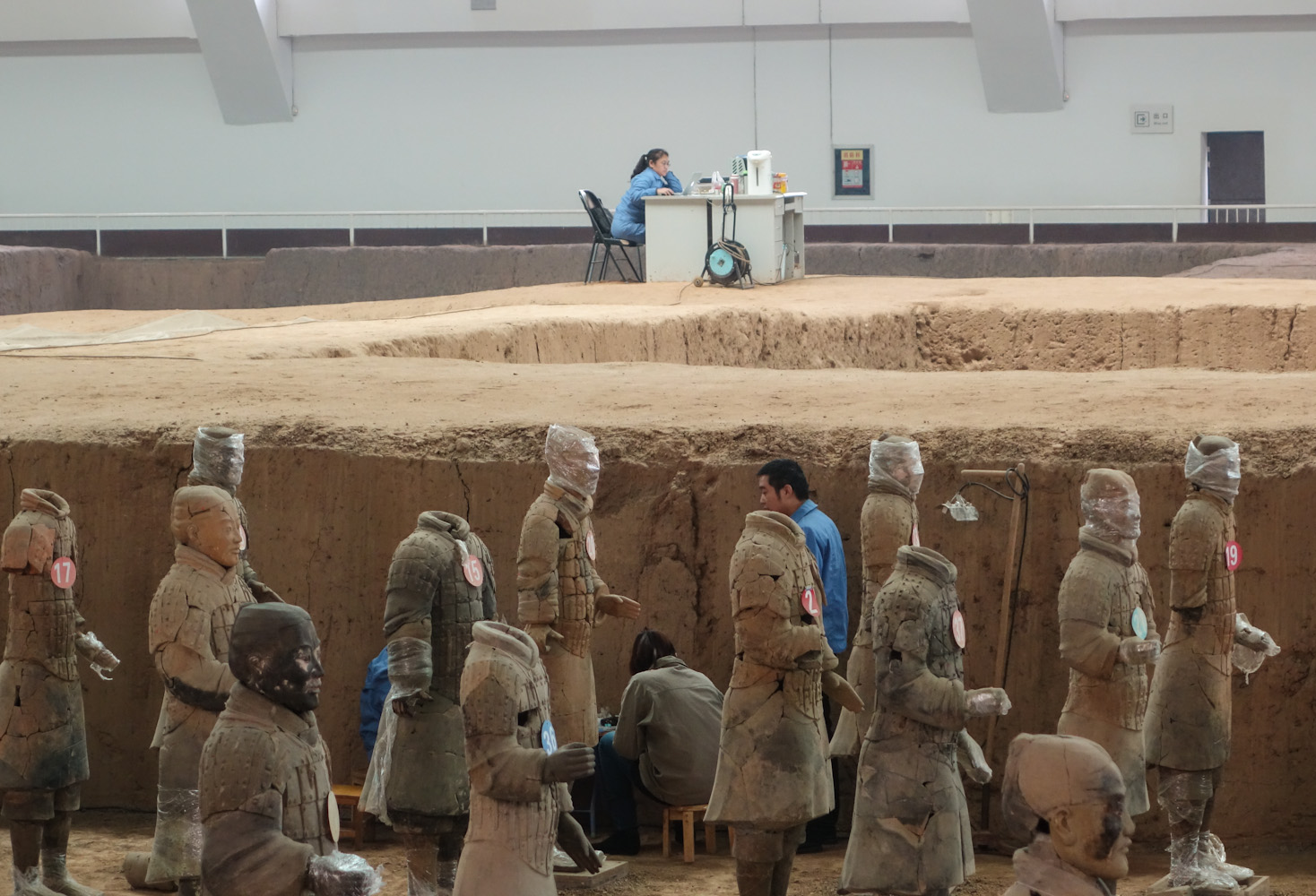 A group of "scientists" choose the least visible spot behind the figures and engaged in melancholic flipping of a bunch of glossy cards. It was obvious the archaeologists were forbidden to touch anything. 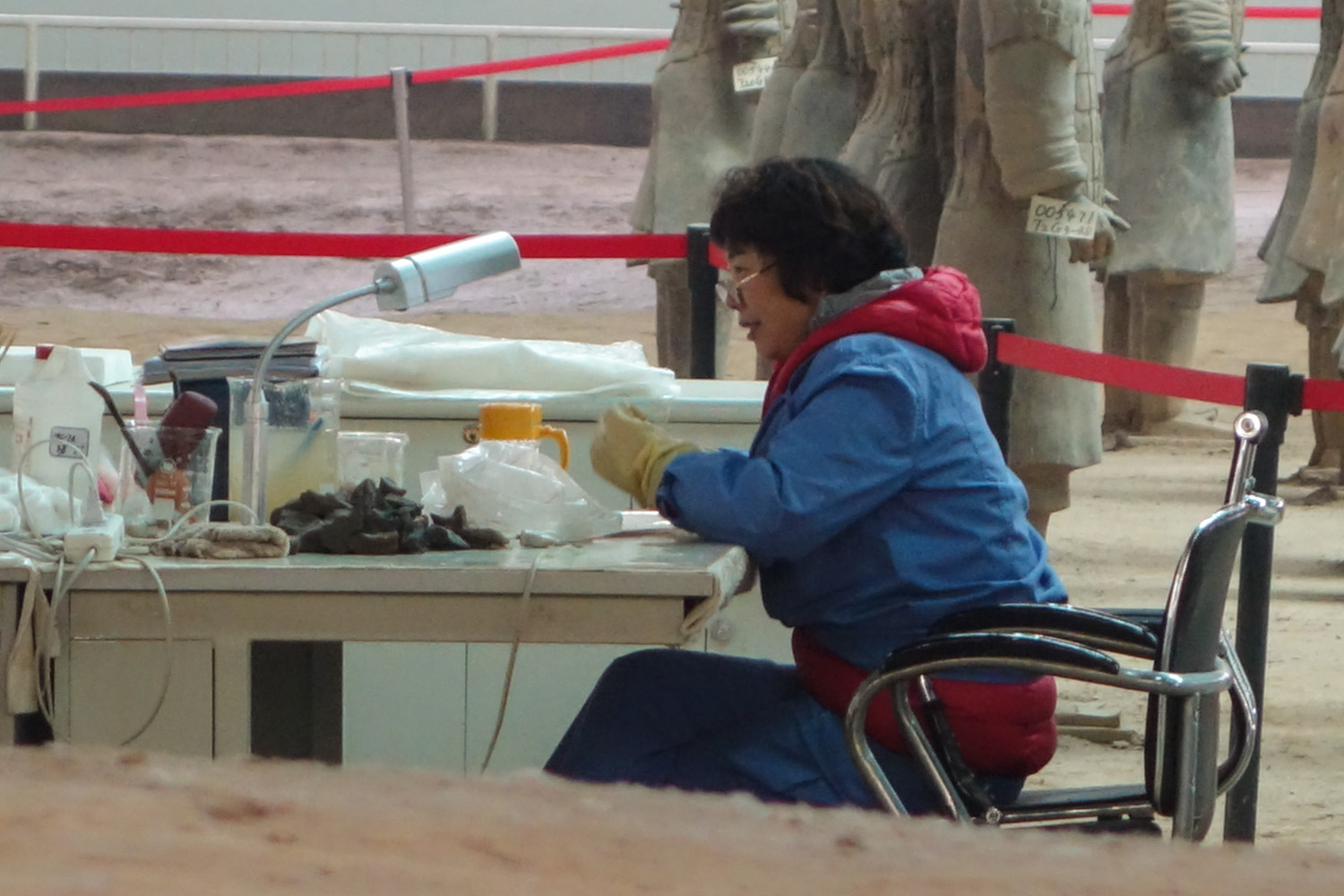 A lady archaeologist was fruitfully engaged taking shards from a plastic bag, wiping them and putting them into another bag. 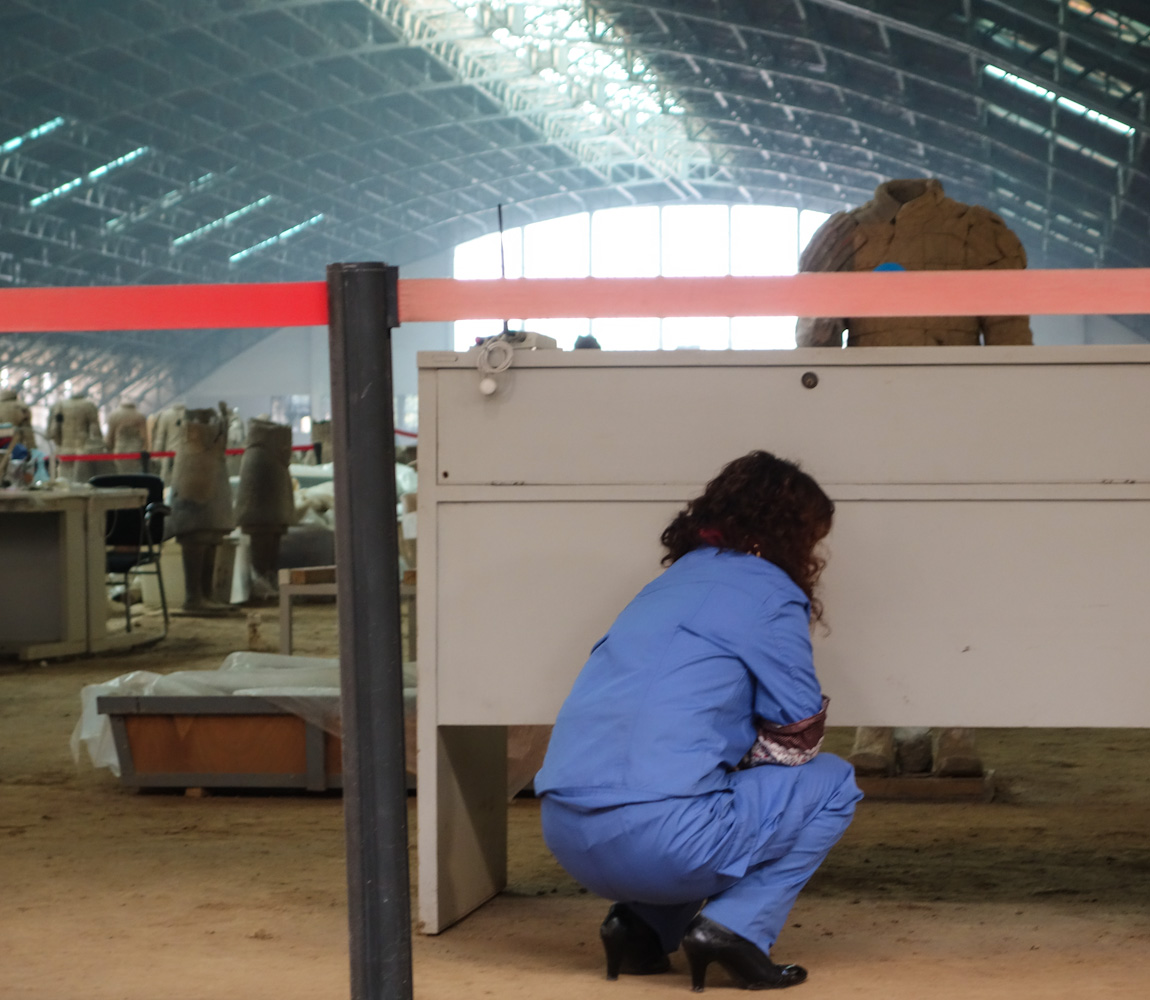 Another sought shelter in the corner of the site. 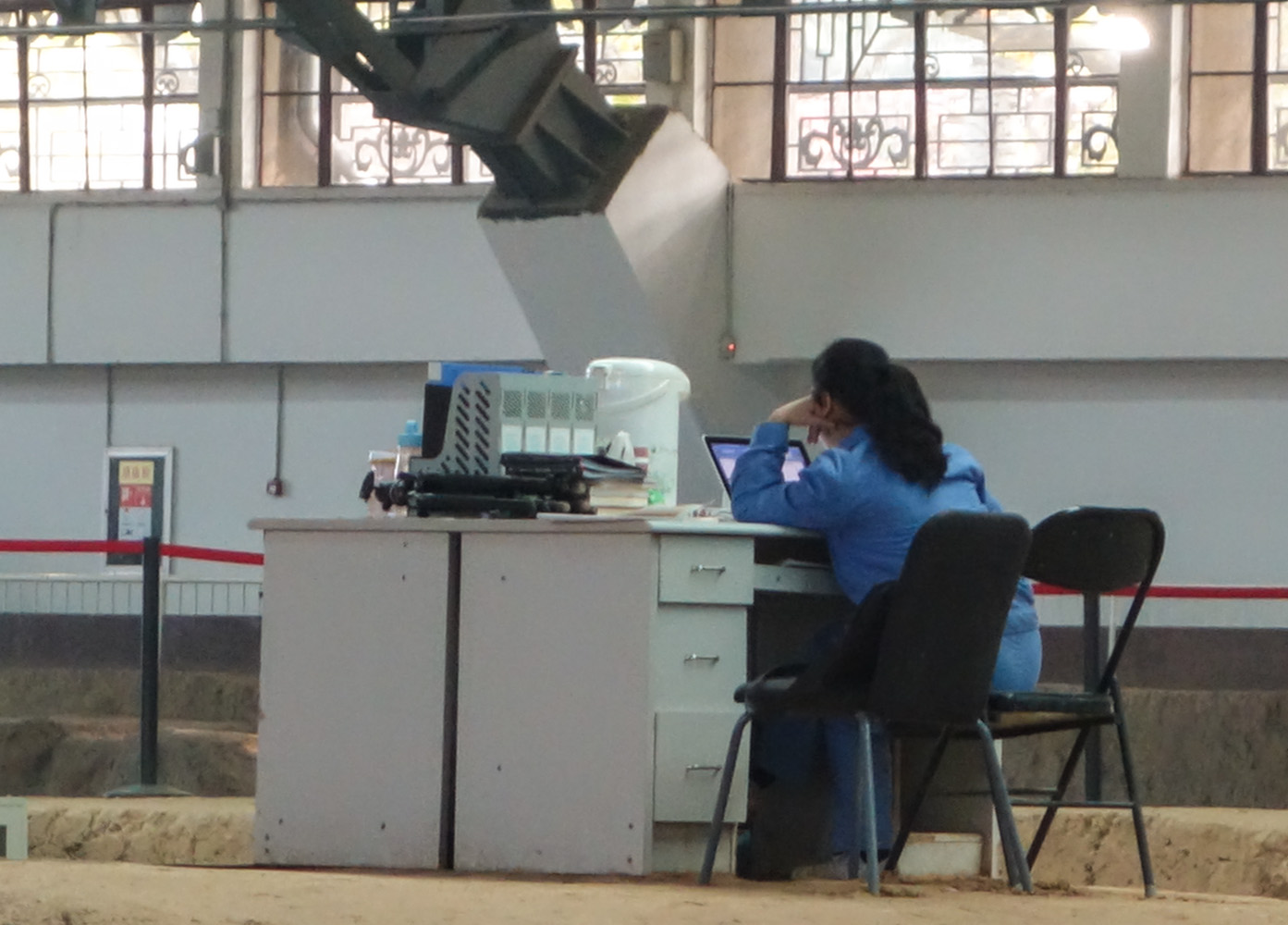 A spirit of melancholy and lazy deception possessed the site and slowed the movements of the people hired to pretend to be working. 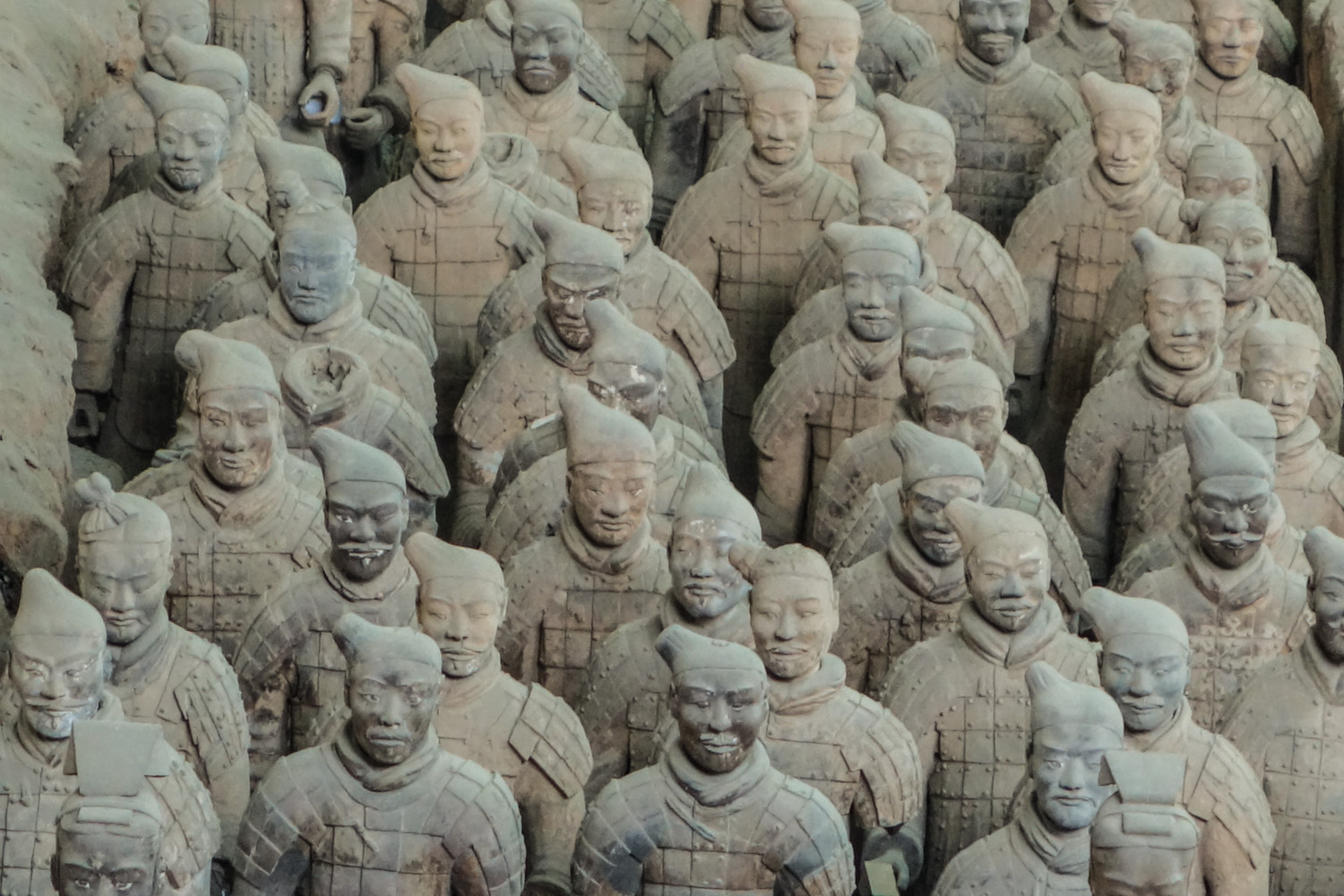 The terracotta army, allegedly discovered in 1974 and ascribed to the Emperor Qin Shi Huangdi, is included in the UNESCO World Heritage list. The warriors bypassed the carbon dating procedure. No independent (read: international) researcher has ever been allowed to run tests on the figures. 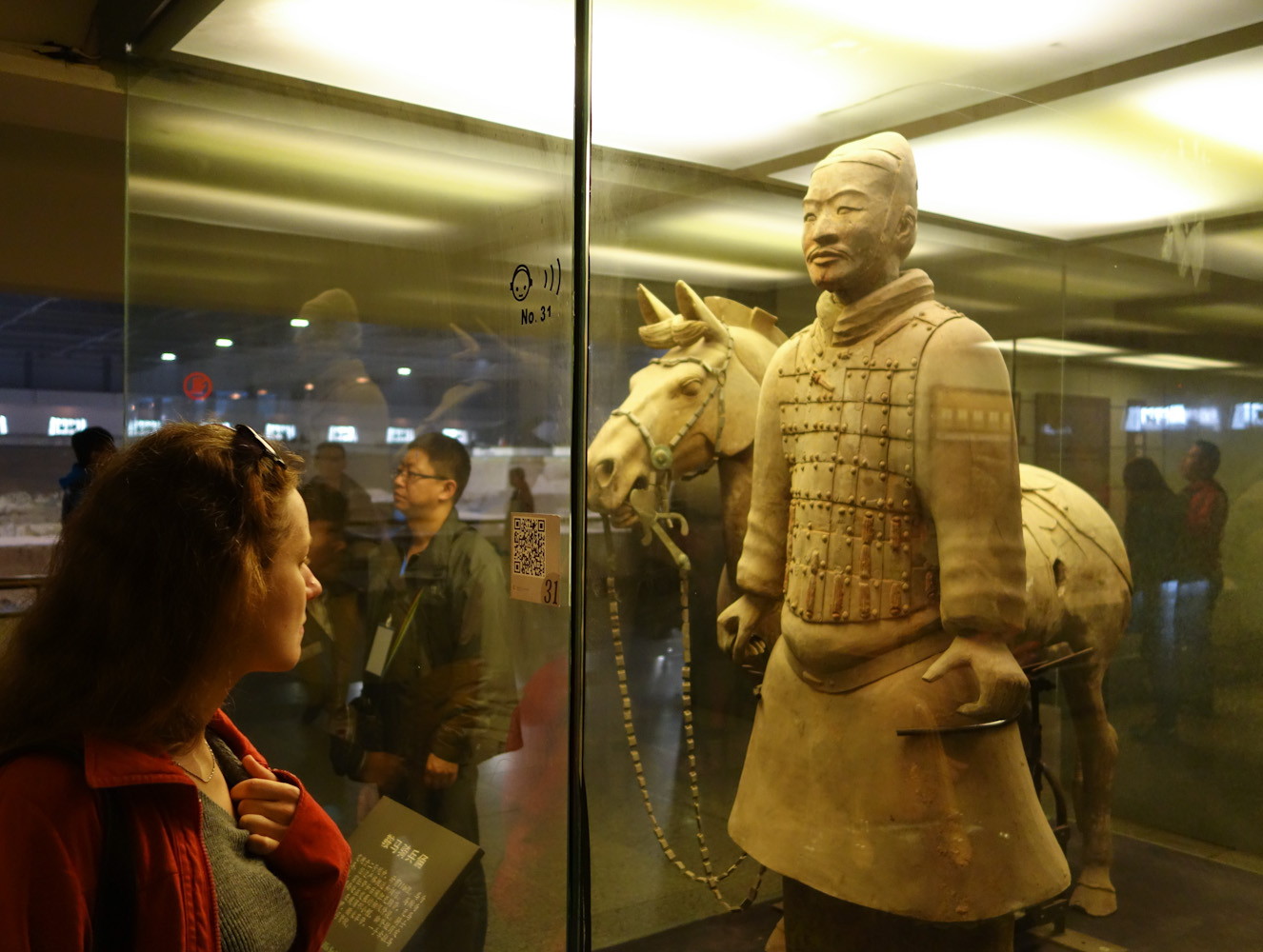 The warriors' faces are those of modern bullies. Their bodies are without complexity or ornamentation. There is no sense of surprise, strangeness and naivete that always accompanies ancient art. 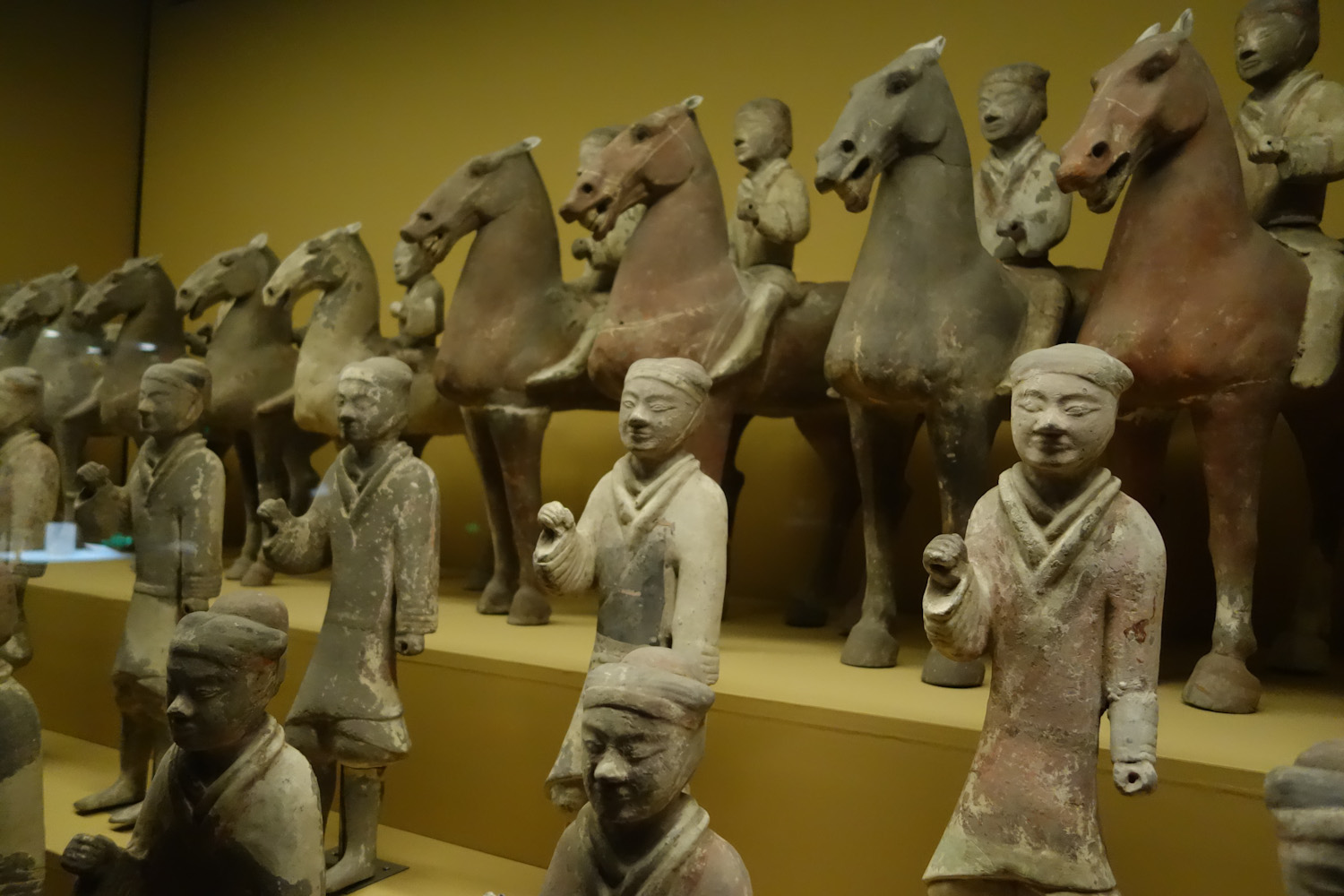 This is a burial army created two hundred years later, during the Han. The small-sized warriors have placid faces of extraterrestrials; their horses are sweetly misshapen. 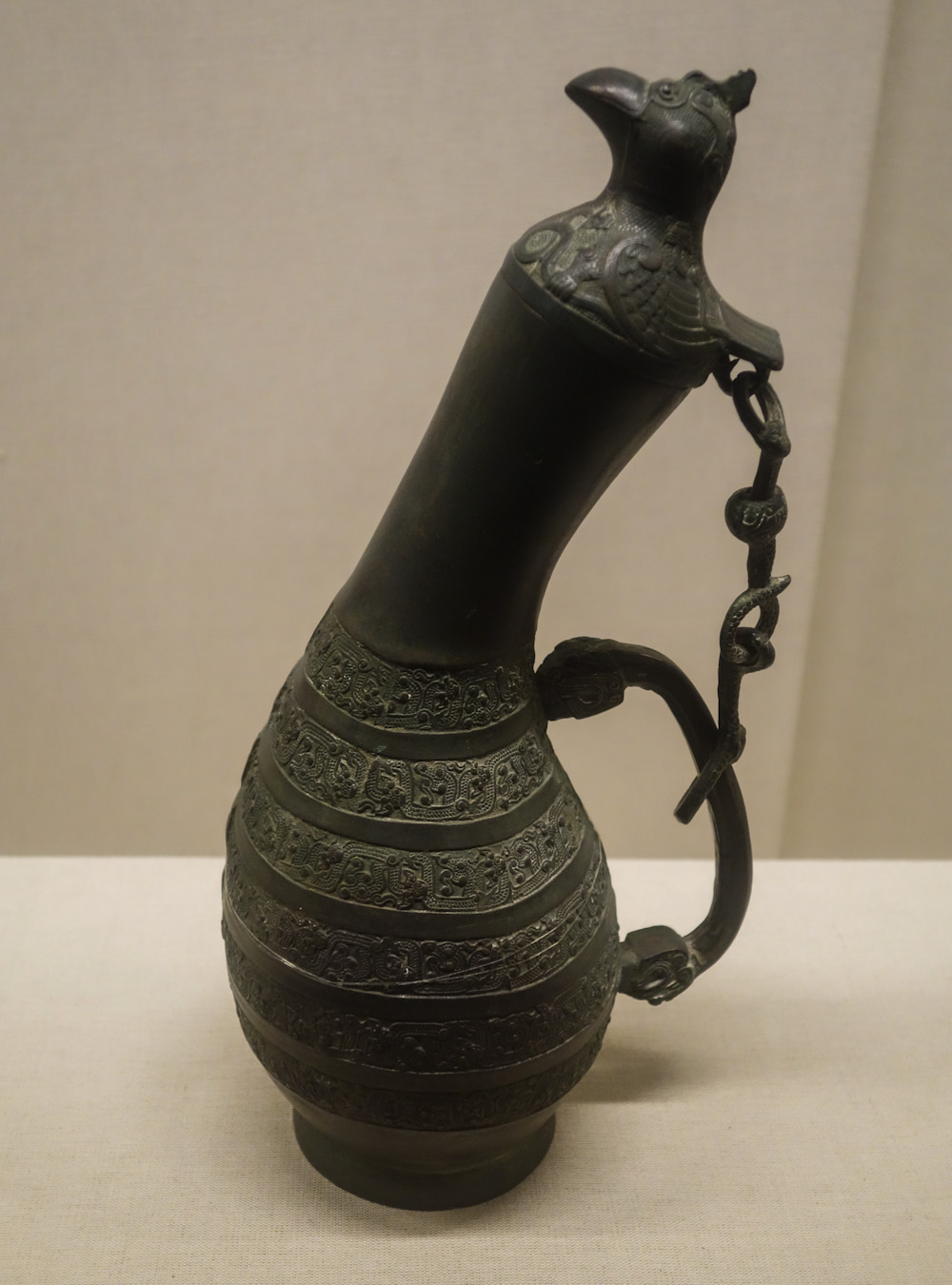 After centuries of magnificent crazy bronzes (see the actual Qin-era vessel above), why would they put such a boring-looking goose into the Emperor's grave (below)? 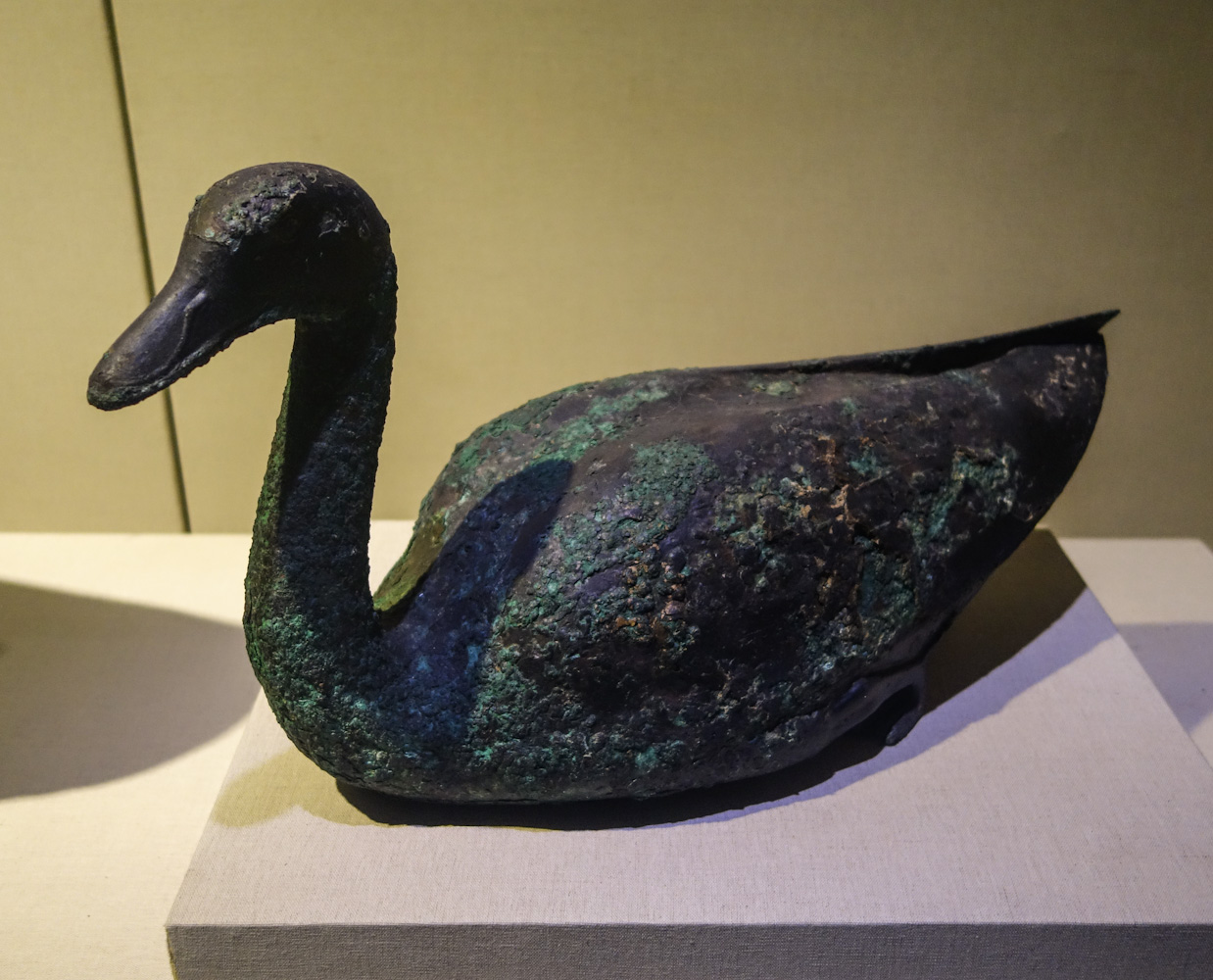 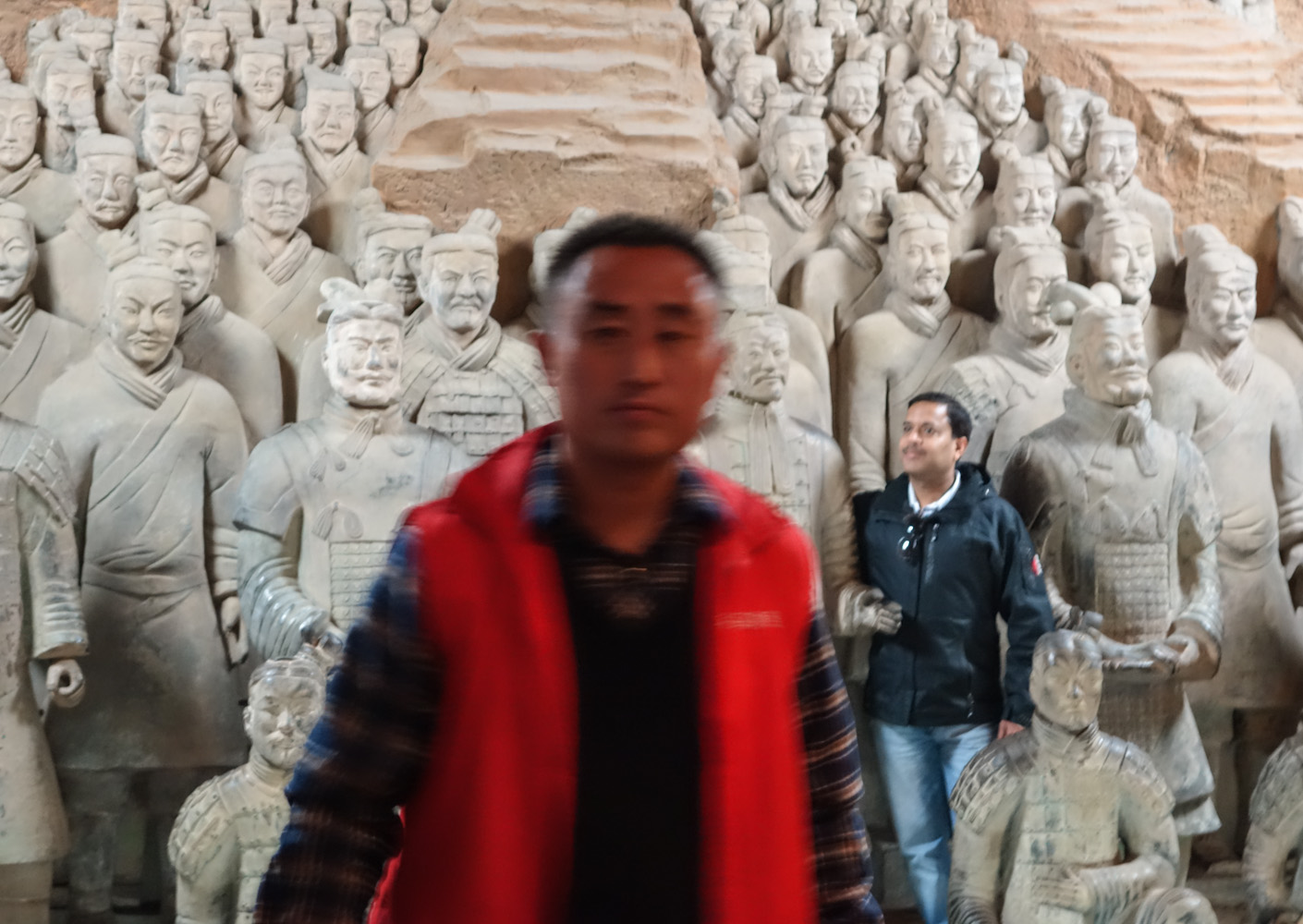 The army was not discovered in 1974 – it was built in 1974. And "artifacts" are still being manufactured, "painstakingly assembled from found pieces." New "discoveries" are announced at regular intervals. Two million people visit the site every year. China's cultural prestige and Xi'an's tourist economy depend on the Terracotta Warriors.

The hoax is in everybody's interest, and it will continue.
Collapse