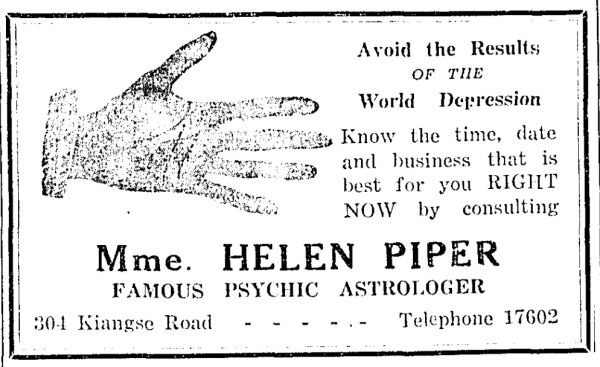 If you're a foreigner in 1931, you just have to turn to the last page of Shanghai Times and find numerous fortune telling ads scattered between advertisements for electrical and manual massage: 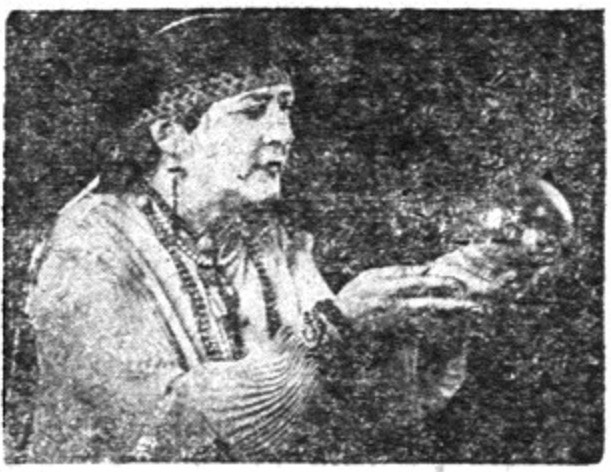 Mme. Helen Piper – Clairvoyant, Palmost and Crystal Reader. Ordained medium and graduate from the School of Occult Science of Agra, India. Treatment and instruction given, also reading by mail. Six years phenomenal success here in Shanghai is a guarantee of the genuine power of this gifted woman. If you are not absolutely satisfied with your reading no fee will be taken. 304 Kiangse Road. Tel 17602. 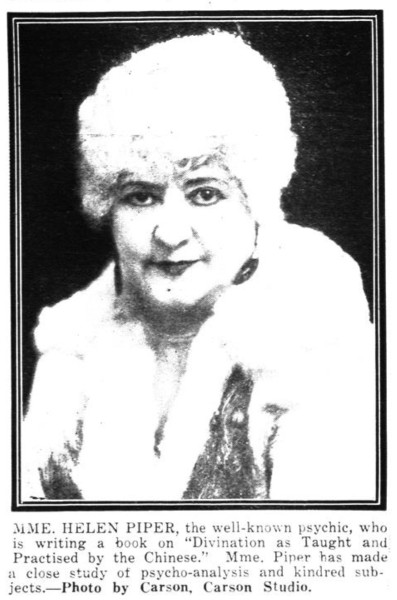 Needless to say, all these occultists were of Russian extraction. See my earlier posts on divination, fortunetelling and associated scams.

There were at least two fortune telling agencies in Linda Terrace (833 Avenue Joffre), the most Russian of all lane neighborhoods in Shanghai: May 21, 1937:
Police Hold "Slick-Fingered Lil." Gypsy Woman Alleged To Have Palmed Gems
Luba Vishnevskaya, alias Petrova, better known to the Shanghai Municipal Police as "Slick-Fingered Lil" was back in the First Special District Court yesterday morning after a long absence, on suspicion of being concerned in another diamond theft case. Lil, a Russian Gypsy woman who graduated from the ranks of her fortune-telling sisters several years agi for the swankier life of a lady of means, is believed to have been the woman involved in the Sennet Freres jewel theft Tuesday afternoon. Standing in the prisoners' dock with Lil was an old Russian offender, Ivan Akifiev, age 44, and a quaking, unhappy-looking Russian Jewess named Eva Shear. Miss Shear has no connection except that she was with Akafiev when he was arrested Wednesday night.
It is alleged that Lil and Akafiev walked into the Sennet Freres establishment on Nanking Road Tuesday afternoon and asked to be shown some diamonds. The man said he was buying a present for his wife and that his woman companion was an expert on diamonds. She has been invite to come along to help him make the purchase. After looking over a tray of sparklers the man stated that none suited him and the couple left the store. With them went $3,900 worth of unset diamonds, and Lil is believed to have palmed them.
The theft was discovered later in the day, and the police were called in. The clerk who had waited on the pair described the woman has been long-legged, long-chinned, very dark-skinned and slender. "She was no beauty," added the unhappy man, "but she was well dressed." The description fitted Lil. Detectives picked her up Wednesday afternoon and took her to Central. None of the missing stones were found in her possession. She laughed at the police and refused to talk.
Detectives remembered that a year ago when Lil was in court, a nman named Akafiev was charged with her in connection with a diamond theft staged at a British jewelry house on Kiukiang Road. They went looking for Akafiev and found him last night just as he was about going aboard the S.S. Prominent at Hunt's Wharf, bound for North China. With him was Miss Shear. No diamonds were found on the persons of either of them. Their luggage was searched and still no diamonds.[...]

May 22, 1937:
Missing Gems Found In A Room Of Russian. Confesses To Theft; "Slick-Fingered Lil" Implicated.
The police case against Luba Vishnevskaya and her alleged accomplice in crime Ivan Akifiev was practically completed yesterday when Detective Sub-Inspector I. Ovsyannikoff, of Central Station, found the diamonds stolen from Sennet Freres. The missing gems were located in Akifiev's room, at House 12 Lane 220 Route Vallon. They were hidden in a hollow spot back of an electric light plug in the baseboard. Counting them, the detective found that the entire lot, 260 gems worth about $4000 were all there. The thieves had made no effort to dispose of them.
It was Akifiev himself who told the detective where the gems could be found. [...] After the diamonds had been located Akifiev then confessed to the theft of a $400 diamond ring from Mellior Arcus, 1209 Bubbling Well Road on May 4, and took Ovsiannikoff to a pawnshop where the ring had been placed in pawn for $200.
In his confession the man absolved Miss Eva Shear, Russian Jewess, who was arrested with him, from all implication in the affair. He told the police that she had nothing to do with the crime, in fact, she knew nothing of his criminal activities. [...] Both Akifiev and the Vishnevskaya woman are old offenders, having faced the court on similar charges. Route Vallon, one block west from Akafiev's address in 1936 (Photo from Flickr Cities in Old Days).

May 28, 1937:
Slick-Fingered Lil And Pal Are Charged
Formal charges of theft on two counts were yesterday morning preferred by the SMP against Luba Vishnevskaya, alias Petrova, alias "Slick-Fingered Lil," Russian Gypsy woman aged 37, and Ivan Akifiev, age 44, Russian, in connection with the recent theft of 269 diamonds worth $3,960 from the Sennet Freres jewelry store at 157 Nanking Road. Theft of the Sennet Freres diamonds constituted one charge while the theft of a diamond ring from Arcus Atelier, 1209 Bubbling Well Road, on May 13, five days before the Nanking Road crime, for the second charge.
[...]
The theft of the diamonds from Sennet Freres was committed on the afternoon of May 18. The pair walked into the shop at 2 p.m. and asked to be shown some diamonds. When the clerk turned his bag on one occasion, it is alleged that the woman picked up a sack containing 269 small gems. The theft was not noticed until the pair had left the store.
Both were arrested within 36 hours. The woman was taken into custody the following morning while the man was nabbed on a boat just as he was preparing to sail for Weihaiwei. A girl, Eva Shear, was arrested with him but was subsequently released, Akifiev having absolved her from blame.

June 4, 1937:
Gypsy Woman Claims She Did Not Share In Gem Loot
The trial of Luba Vichnevskaya, alias "Slick-Fingered Lil," Gypsy woman, and her confederate Ivan Akifiev, Russian, on charges of stealing 296 diamonds from the Sennet Freres Jewelry Store, 157 Nanking Road, three weeks ago, came to an end in the First Special District Court yesterday. They were remanded in custody until next Thursday when judgment will be handed down.
Although she had previously signed a confession, Lil yesterday surprised the court, the police and the press by retracting her statements and claiming innocence. She admitted, however, that she visited Sennet Freres with Akifiev but declared that she did not know he had stolen any diamonds. She added that she had received no share of the loot.
E. N. Shendrikoff, attorney for Akifiev, threw his client on the mercy of the court. He painted a touching picture of the accused man's struggle against poverty and said that money obtained by Akifiev from the theft before the Sennet Freres robbery had been used to pay medical bills for his sick common-law wife and their child. The attorney continued that since Akifiev had been the first to confess and had shown the police where the diamonds were hidden he should be let off with a light sentence. 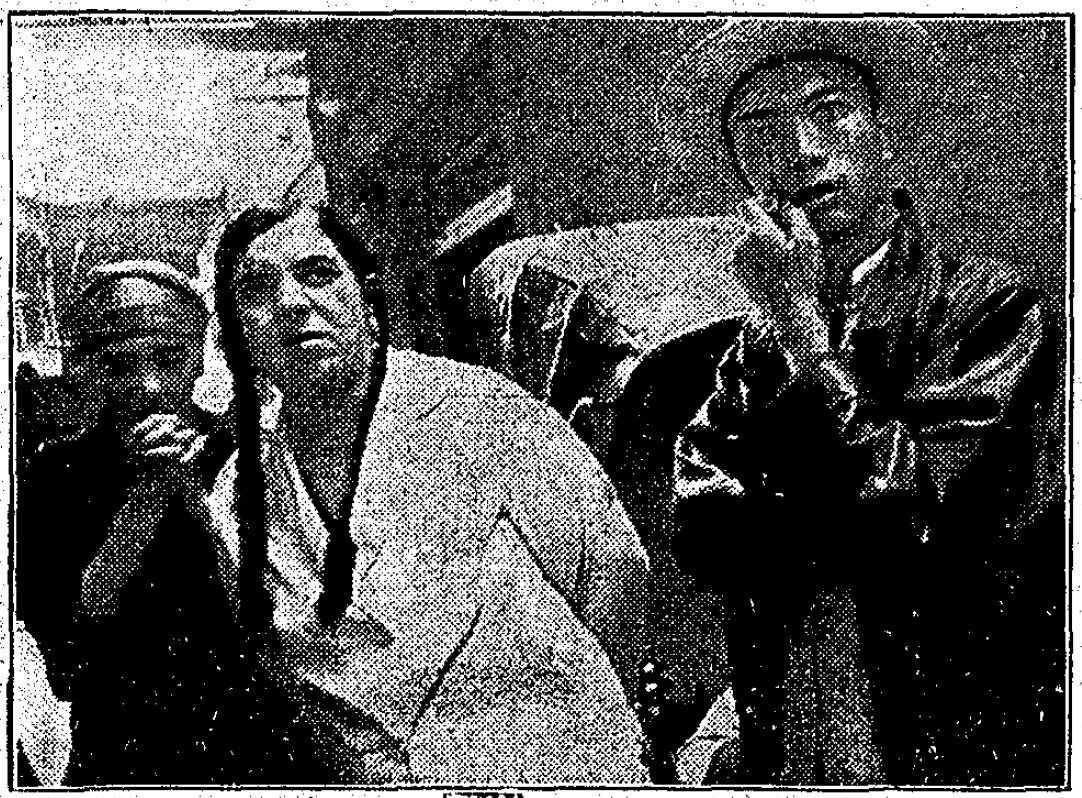 Slick-Fingered Lil's Gypsy relatives register their disapproval of the sentence handed down against the jewel thief at the First Special District Court yesterday. The Gypsy woman in the foreground, a relative, turns up her nose at a police officer not shown in the picture. In the background is Lil's mother, who spent several hours in the compound yesterday, alternatively praying and beating her chest. At the moment the picture was taken she was praying.

There was plenty of excitement at the First Special District Court yesterday morning when that tribunal bassed judgment on Luba Vishnevskaya, Gypsy, alias "Slick-Fingered Lil," and her companion in crime, Ivan Akifiev, Russian. Convicted of stealing 269 small diamonds from the Sennet Freres jewelry store on Nanking Road, May 18, Lil was given a year in jail while Akifiev was sentenced to spend 20 months behind bars. Lil's olive skin turned a trifle pale but she offered no comment. [...] The excitement, however, was caused by three elderly Gypsy women, apparently, all relatives of Lil's.

As the convicted girl was led from the courtroom by the police matron, the old women followed, crying and moaning. Lil was taken to the disbursing office and kept there for two hours before being removed to Ward Road Jail where she will spend the coming year. While she was inside the office the old women stood about outside and voiced their indignation of the law in general and the police in particular. There were sporadic outbursts of tears but the big show was staged when Lil was taken from the disbursing office to the prison van.

All three of her relatives set up a howl that could be heard throughout the court compound. One old woman, apparently about 60, commmenced to beat her chest with her hands and started screaming in true "Tarzan" fashion. She kept it up until the prison van, with Lil inside, had left the compound. Akifiev, although married and the father of a four-year-old daughter, was not troubled with relatives crying over him. [...]

The Russian signed a written confession and so did Lil, but she repudiated it later. She told the court that the police had tortured her into signing the statement, confessing her guilt. The court had her examined but found no bruises or other marks of injury. She was confronted with this in court. "The police can do anything," said Lil. "They got rid of the bruises and bumps by rubbing me with some kind of magic liquid."

June 12, 1937:
Sennet Freres To Move Into Hamilton House. Believe Stock Will Be Safer. Series Of Crimes Given As Reason For Quitting Nanking Road. 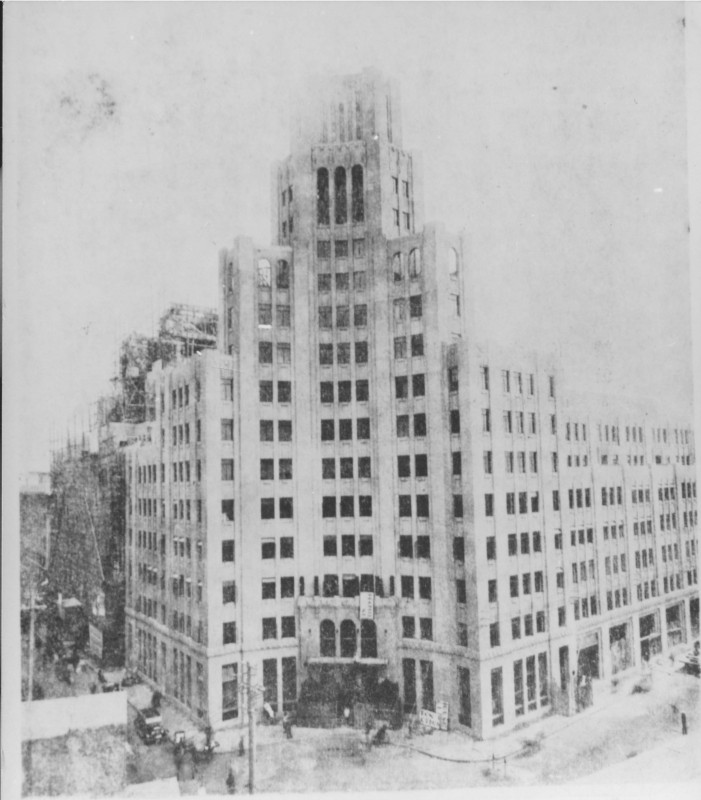 August 11, 1937:
Gypsies Gladdened Slick-Fingered Lil Released; Serves 82 Days
Shanghai Gypsies whooped with joy as their compatriot Slick-Fingered Lil was released yesterday morning after her appeal before the Kiangsu High Court. [...] The High Court found her not guilty of assisting in the theft, but guilty of receiving stolen goods. Sentenced agaon by the High Court to 80 days or $160 "Lil" was released as she had already served 82 days since she was arrested on May 19. Judges [...] also reduced the sentence of Akifiev from two years to one year.
Pleased with the decision, the many Gypsies who had gathered at the court to welcome "Lil" back celebrated her coming out with gay Gypsy tunes.

(All articles are from The China Press)

The lawyer Shendrikoff's life must have been full of excitement. He was a high-profile member of the Russian and international communities, a large benefactor of charities, etc, and his job brought him in contact with the lowest strata of the diaspora. I would imagine, he probably defended Akifiev and Vishnevskaya without any fees, as part of a community service.

There is no doubt that "Slick-Fingered Lil" Luba Vishnevskaya was part of the clan whose member, Victor Vishnevsky, later penned Memories Of A Gypsy. It would be a mistake to think the 1937 case was her last crime.

Oct 21, 1937:
"Slick-Fingered Lil" Charged With Attempt To Steal $13
Luba "Slick-Fingered Lil" Petrova, 33, Gypsy, well-known to the police of both the French Concession and the Settlement, was back in the hands of the law yesterday after she allegedly attempted to fleece a Chinese shopkeeper at 421 Ferry Road of $13 Tuesday afternoon...