Another curious rediscovery is described in James Ross’ Escape To Shanghai: A Jewish Community in China (1994). This book, by the way, is quite comprehensive and full of exclusive details; it also gives an excellent summary of the relationship of Russian and European Jews in wartime Shanghai.

So the author goes to the New Ashkenazi Synagogue, built in 1937–1941, on Route Tenant de La Tour in the French Concession:

My Chinese guide and I went first to the “new” Russian synagogue on Xiangyang Nan Road (formerly Rue de la Tour in the French Concession), consecrated in 1941. The original building still stands and it is now used as an auditorium for the Shanghai Education College. Chen Weng Zhang, the former doorkeeper for the synagogue, still works there. He told us the interior of the synagogue was destroyed in a fire in the early 1950s. But the outside, with round windows over the entrance and long, narrow windows along the side of the building remains the same. Chen was never allowed inside the synagogue, but he remembers that there were some tablets (memorial tablets) in the front lobby. The youtairen (Jews) burned candles or incense there, he said, much like the Buddhists.

This description – "narrow windows along the side of the building" – makes me return to the suggestion that these photos from the USHMM collection were taken inside this synagogue, after all. The building still stands, but is much altered. 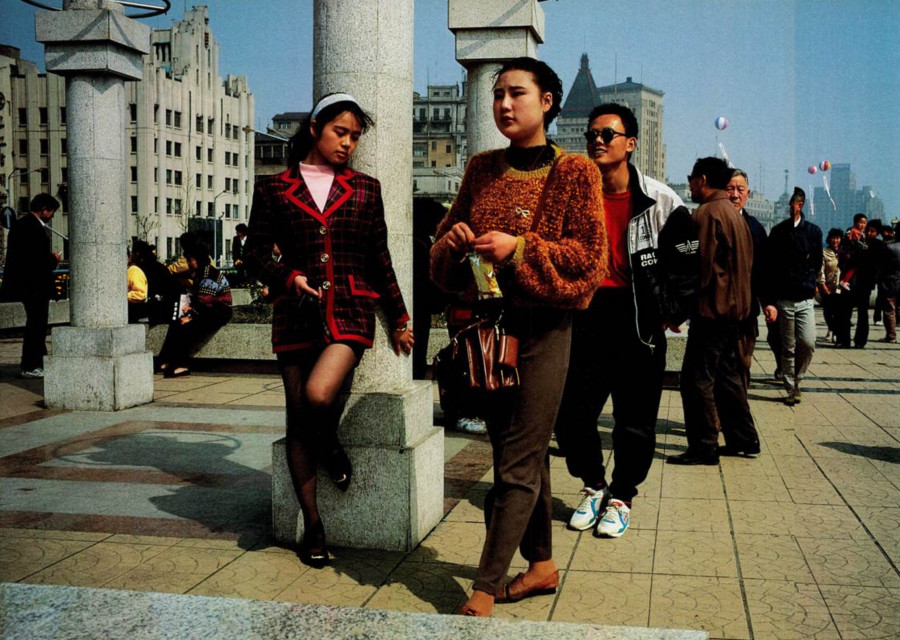 The National Geographic magazine featured Shanghai once in a while, starting in 1900. The authors of the 1927 article "Ho for the Soochow Ho" traveled along Suzhou Creek from Shanghai to Hangzhou, taking pictures along the way: 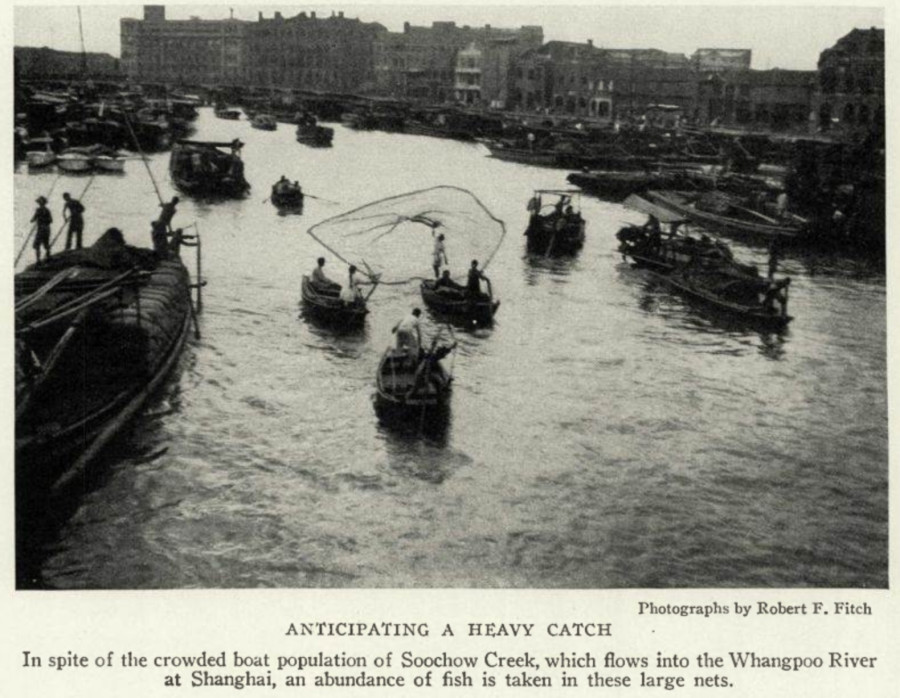 The September 1932 article, called "Cosmopolitan Shanghai: Key Seaport of China," showed some interesting photographs, like this steamer in Nantao: 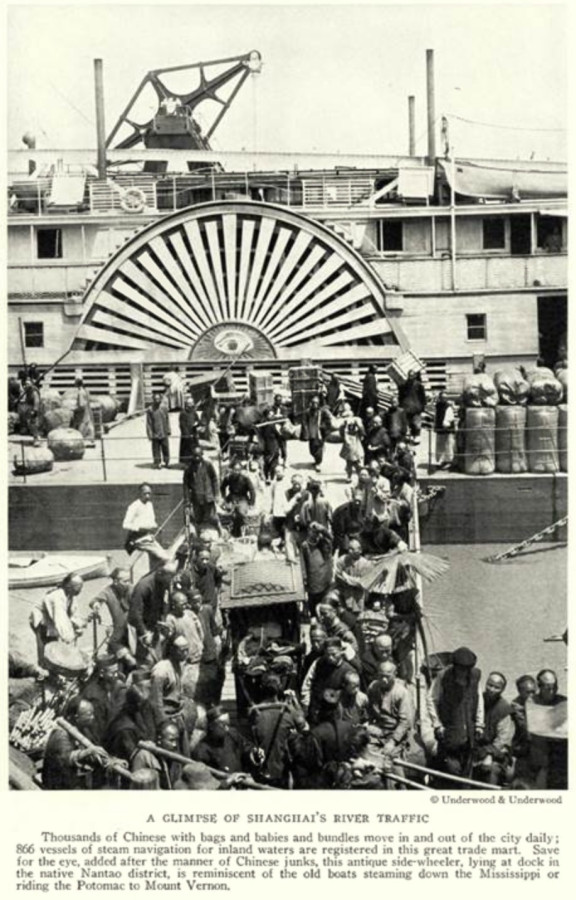 The October 1937 feature "Changing Shanghai" was written before the onset of the Japanese occupation, so it was illustrated with photographs from earlier years. For instance, the image of the Bund where the accidental bombs landed in August 1937 showed the Concordia Club (demolished in 1935): 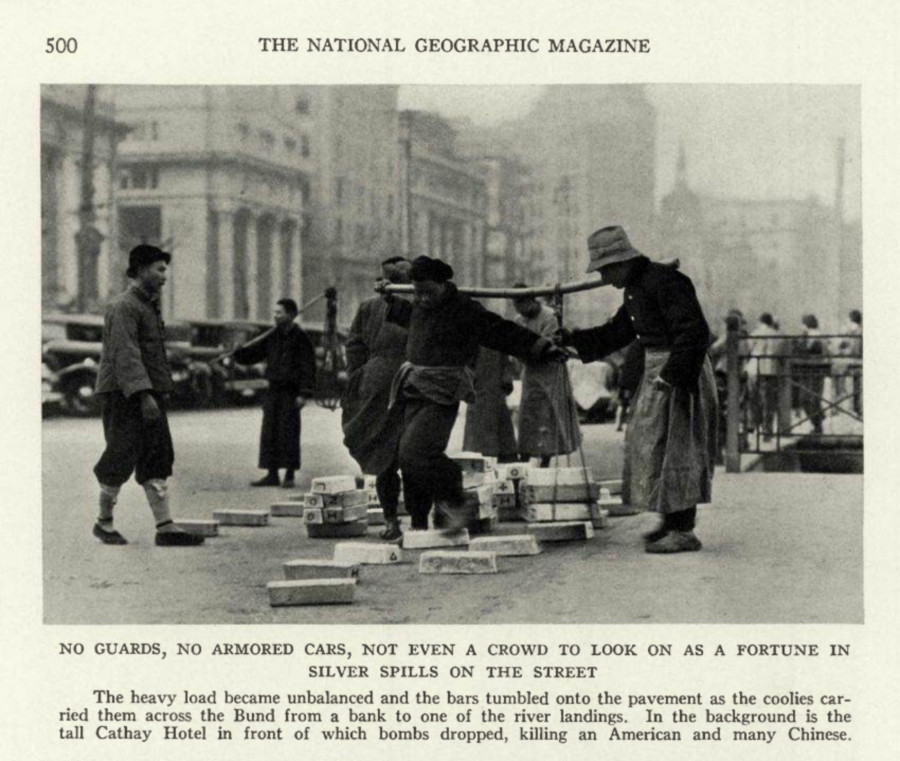 In 1945, Shanghai appeared in the write-up on the means of transportation in China: 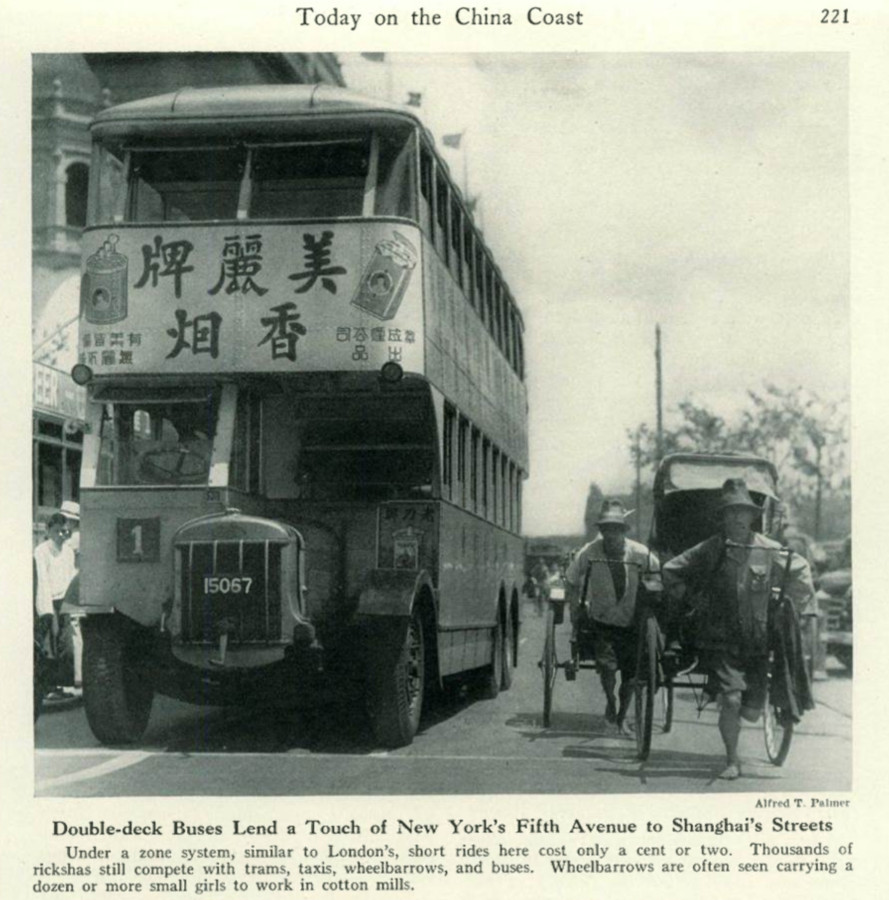 As civil war raged in China, the March 1948 issue had some beautifully colorized views of unchanging Shanghai: 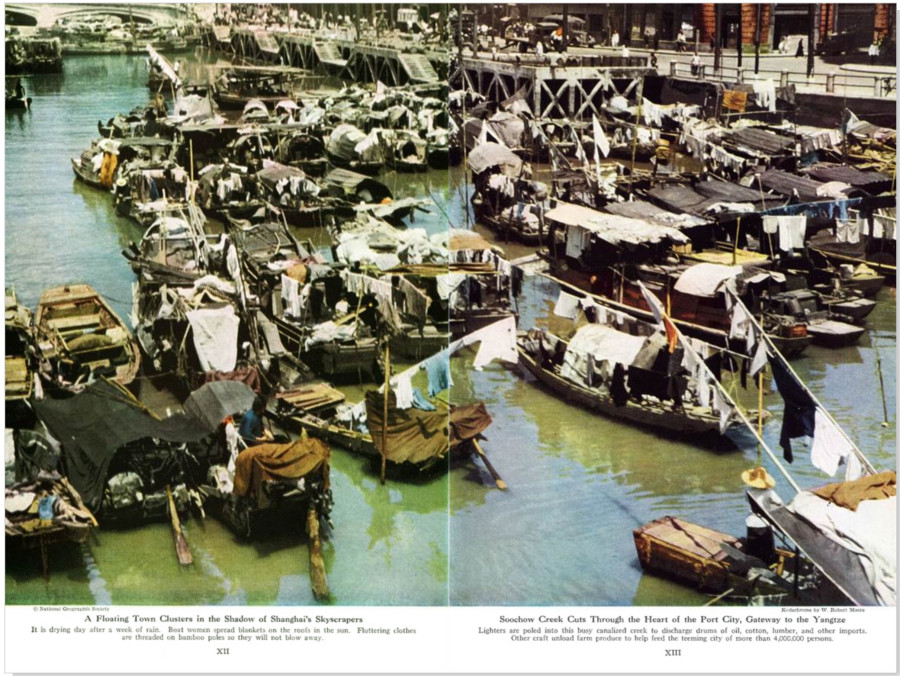 The staunch apolitical stance of the magazine painted the picture of a city frozen in time. The 1949 Liberation and the Great Leap Forward went unnoticed. The November 1964 issue mentioned Shanghai in "This Is China I Saw" article: The December 1971 article "Return to Changing China" did not talk about Shanghai very much. But the July 1980 feature took extensive notice of "China's Born-Again Giant" and showed some excellent photographs: 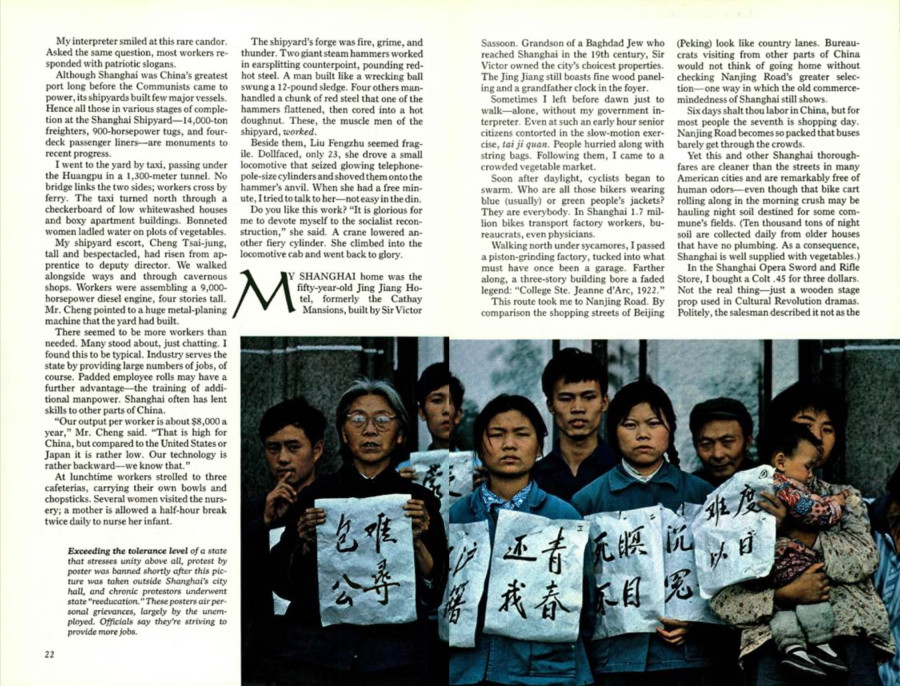 This last photo shows the "chronic protesters" who aired personal grievances and demanded more jobs, standing in front of the city hall (which would be in the HSBC building on the Bund).

What a marvelous view, taken from the TV tower on West Nanjing Road (already dismantled); its shadow dissects the picture around the center: 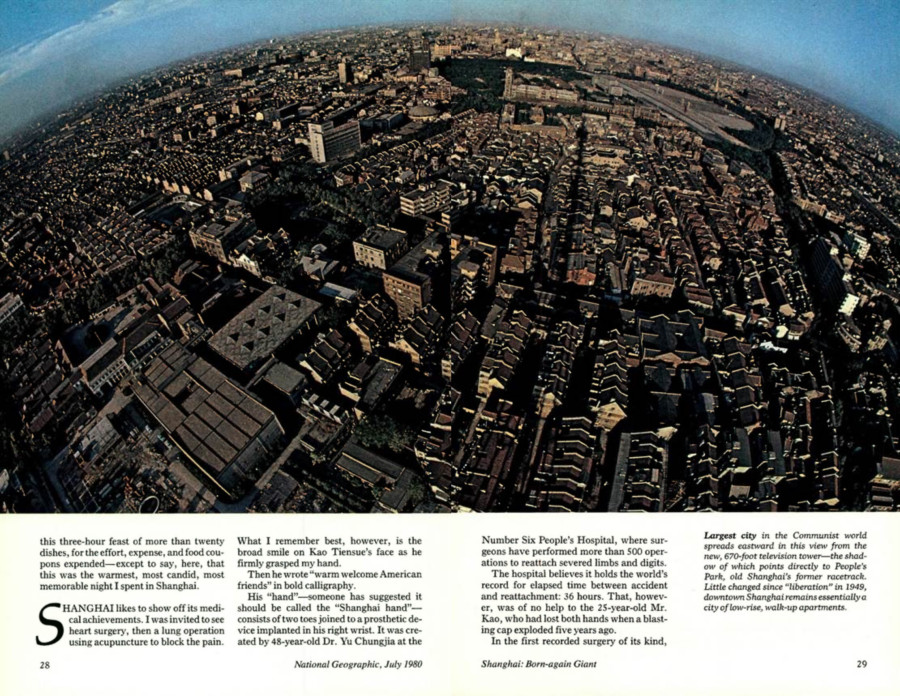 The neighborhood around Jiangying Road seen closer: the Raceclub; the stables are still standing; there is no elevated Chongqing Road yet, so the Chengtu Road Police Station (left) is still in place: 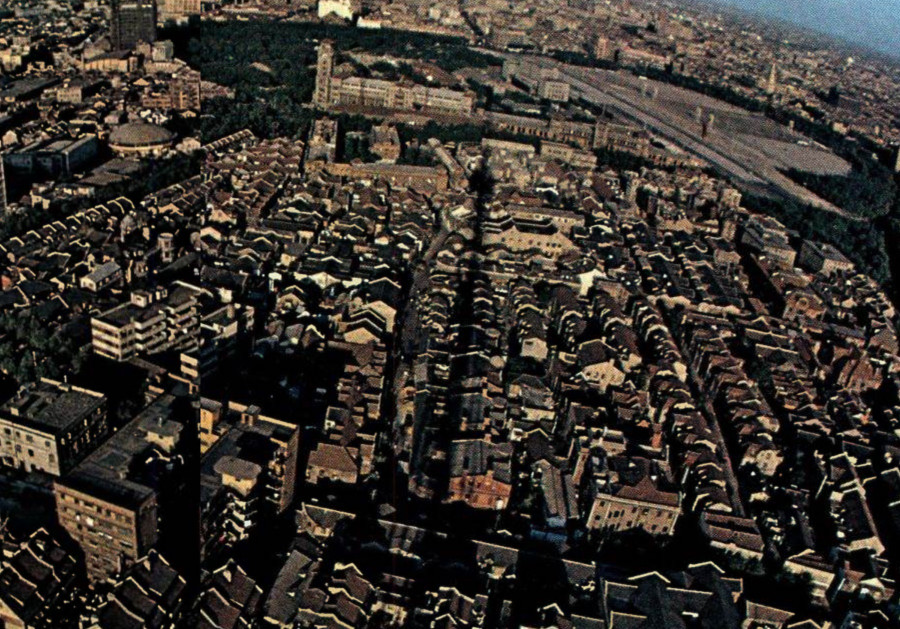 And the March 1994 feature was entitled "Shanghai: Where China's Past and Future Meet:"