This article was originally written for the Shanghai Architecture Series in Magazeta: https://magazeta.com/2019/04/arc-majestic/ 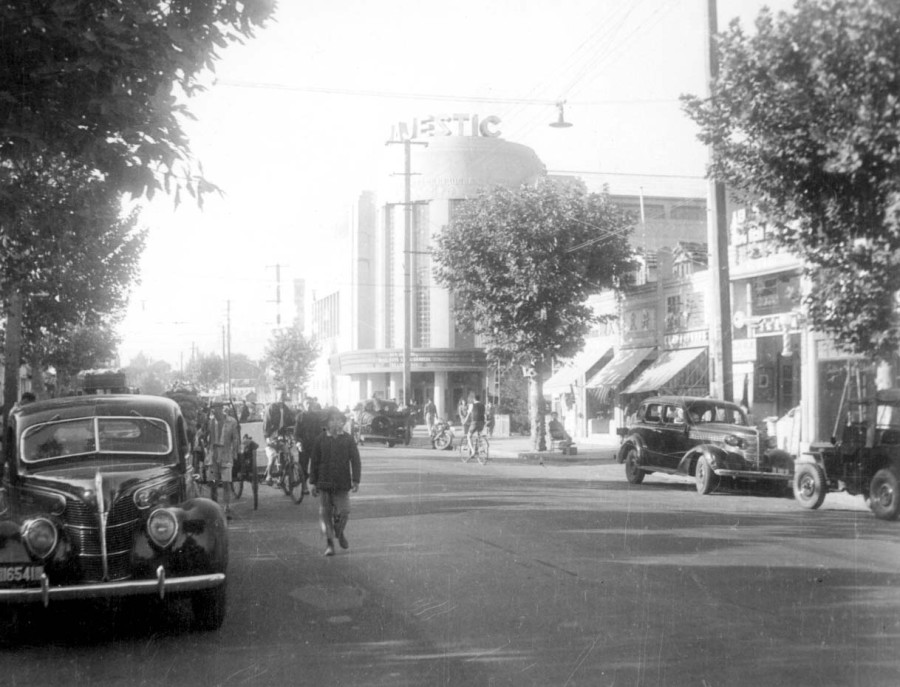 Majestic Theatre, built in 1941 on the corner of Gordon Road and McBain Road, became one of the last cinemas of old Shanghai. (The last one appears to have been the Queen's Theatre on Tibet Road, which opened in 1942.) The Majestic belonged to the Asia Theatres Inc., the company started by the entrepreneur A. T. Holt (He Tingran 何挺然). Having hired Robert Fan once to build the Nanking Theatre in the French Concession, the company reengaged him ten years later to build a new cinema in the International Settlement. By that time the architect had already moved on from the neo-classical and hybrid aesthetic to austere modernism. The Majestic amply reflects his new stylistic conviction: lots of parallel lines and sweeping curves, outside and inside.

The name for the new theatre – the Majestic – was fairly easy to assign. The lot where it was built had been associated with the Majestic Hotel, which stood there since 1924. The street to the east of the lot was even called Majestic Road. The Majestic Hotel was the largest event venue in 1920s Shanghai, the site of the yearly Russian Balls where ballet numbers and fashion shows ensured the stream of donations for the benefit of stateless Russian refugees. The stage of the Majestic Hotel became the launchpad for a number of Russian artists, including the jazz band leader Serge Ermoll, ballerina Nina Antares, dancer Lucy Cherikova, and others. In 1925 the ballroom was rebuilt, and this joint project, executed in partnership with the Spanish architect Abelardo Lafuente, launched the successful career of the Russian architect Alexander Yaron. The ballroom operated for a only few years: in 1927 the hotel was damaged in a fire, and by the end of 1931 all of the lot was partitioned and sold to developers.

In the summer of 1941, there appeared to be no room in Shanghai for yet another cinema palace. Public was anxious about the tightening Japanese control of the city. Worried about inflation, customers were emptying the shelves of stores selling woolens, preparing for hard winter. Abductions, extortion and murder were on the rise. In July, a gang went on trial for attempted blackmail of Shanghai movie theatre owners. Local press was debating whether movie theatres would start closing after the Republican government put a cap on foreign transfers to purchase Hollywood films. In early October, cinema employees went on strike, demanding a pay rise.

And yet, on 15 October, 1941, the new Majestic Theatre opened with a pomp. On the opening night, the cinema with over 1,500 seats played the frivolous comedy about small-town goddiggers, called Moon Over Miami (1941). Responding to the general sense of crisis, the management publicized the donation of box office proceeds to the Chinese Society for the Blind.

To bypass the purchasing quota, the manager of the Asia Theatres Inc. A. R. Hager traveled to Hong Kong, where he parlayed about the purchasing quotas with members of the Kuomintang government from Chungking. The company's honor was at stake, for it controlled the "big four" theatres of Shanghai – Nanking, Grand, Cathay and Majestic. After Hollywood films arrived in Shanghai, they had to confront the formidable Shanghai Censorship Board, led by corrupt Kuomintang officials who turned issuing of the screening permits into a game of squeeze. Yet all the troubles paid off amply: like always in times of economic insecurity, Shanghai movie theatres were full, and cinema remained the preferred popular escape from real world troubles.

After the war, the Majestic was used more often as a theatre venue, and less as a cinema. In autumn 1945, Mei Lanfang played leading roles in a series of Peking opera plays. In 1952, the Russian ballet star Galina Ulanova danced in the Majestic for the Chinese public as part of her Chinese tour. The overall reception in China was lacklustre, according to Russian sources, and it hurt her prospects back in the USSR.

A recent restoration of the building was, reportedly, very thorough and it returned the theatre to its intended shape and look, including the stained glass and the hanging chandelier in the foyer. The terrazo flooring, which had been gradually replaced with marble, was also put back. The theatre employees who worked here in the 1950s reported that the Majestic looks just like it did in the old days. 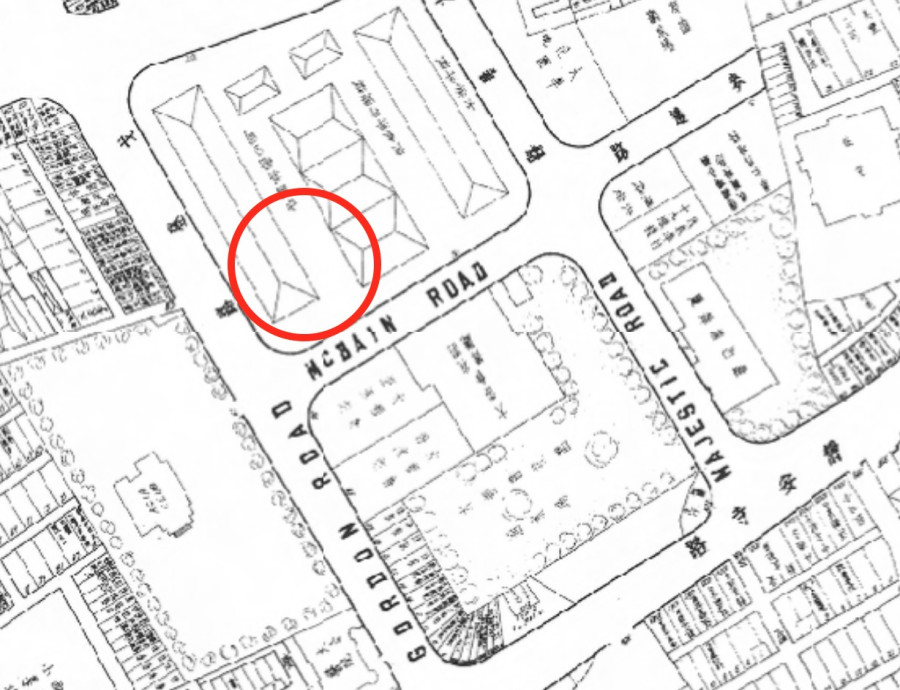 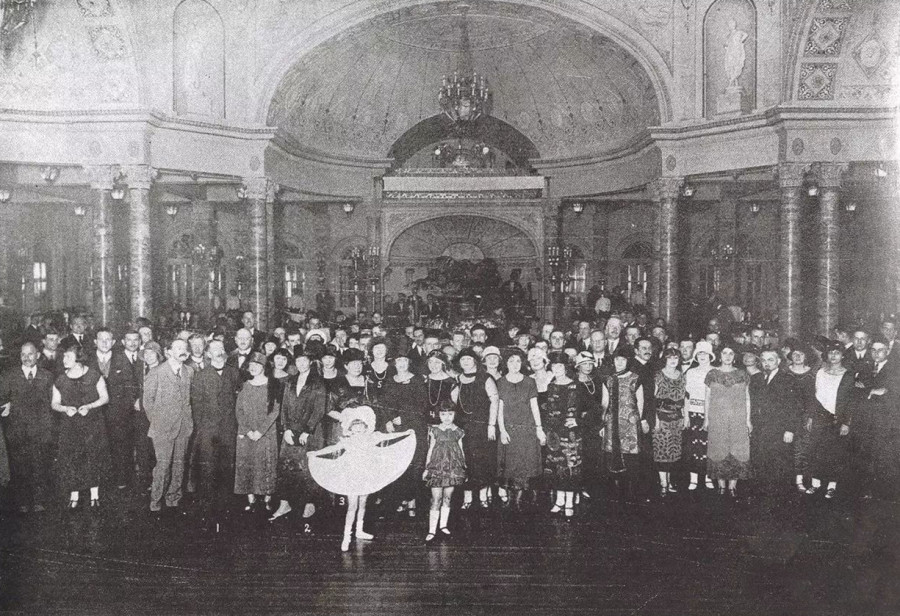 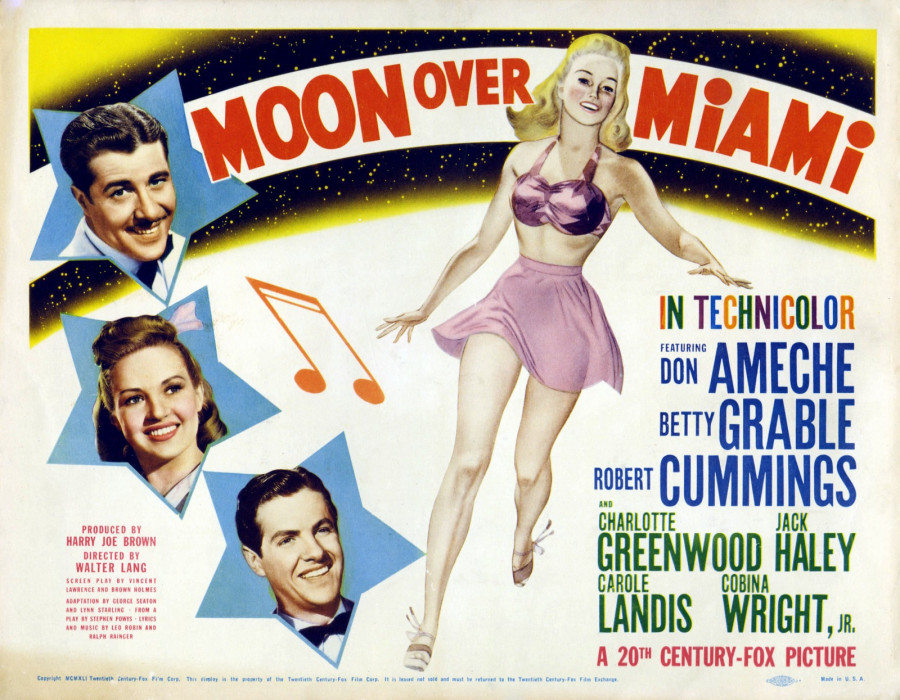 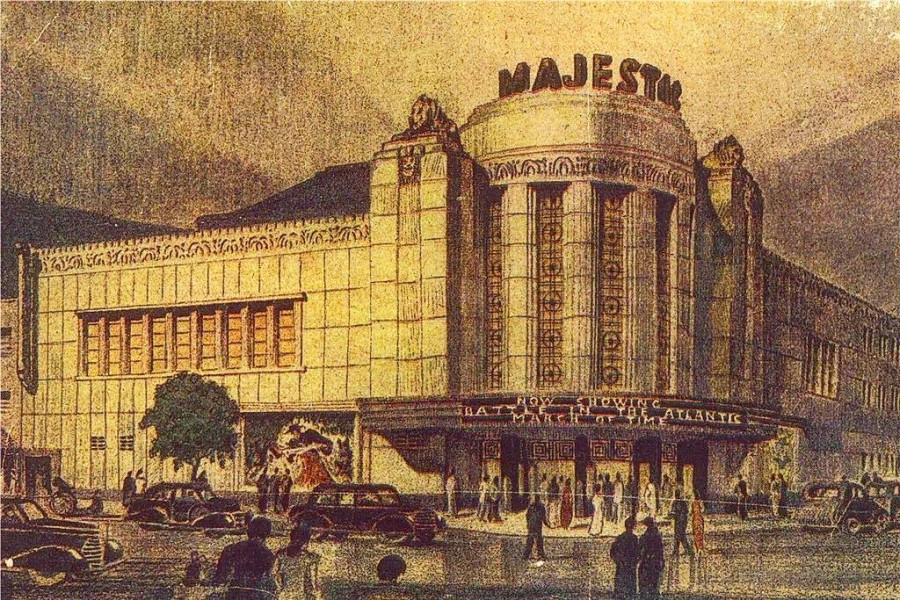 Drawing of the Majestic, by Robert Fan, in 1941. Image: Historic Shanghai. 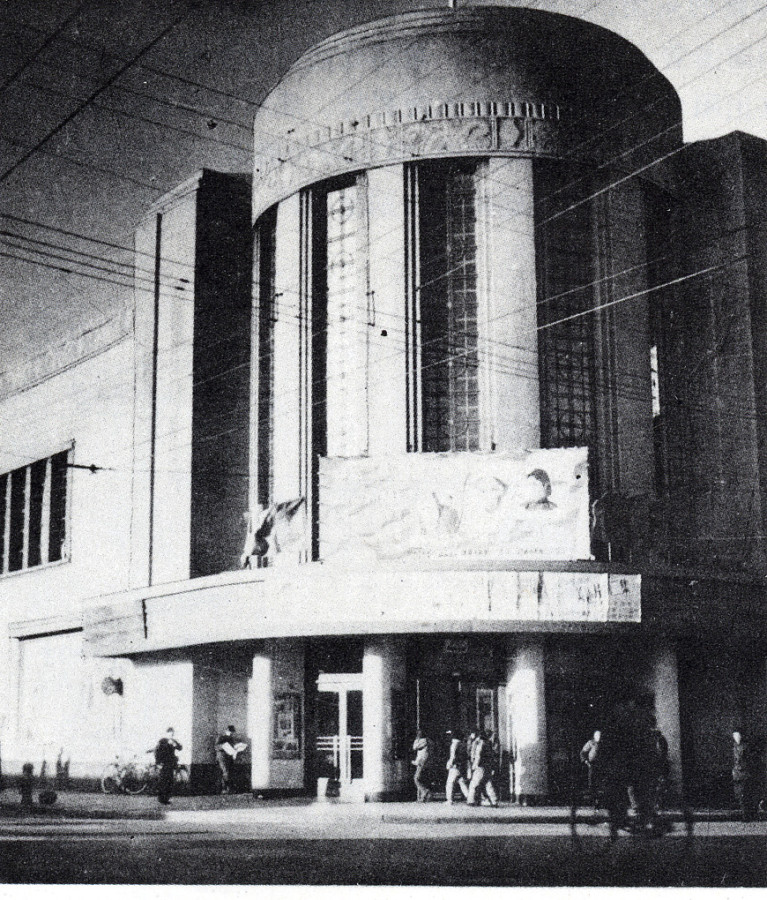 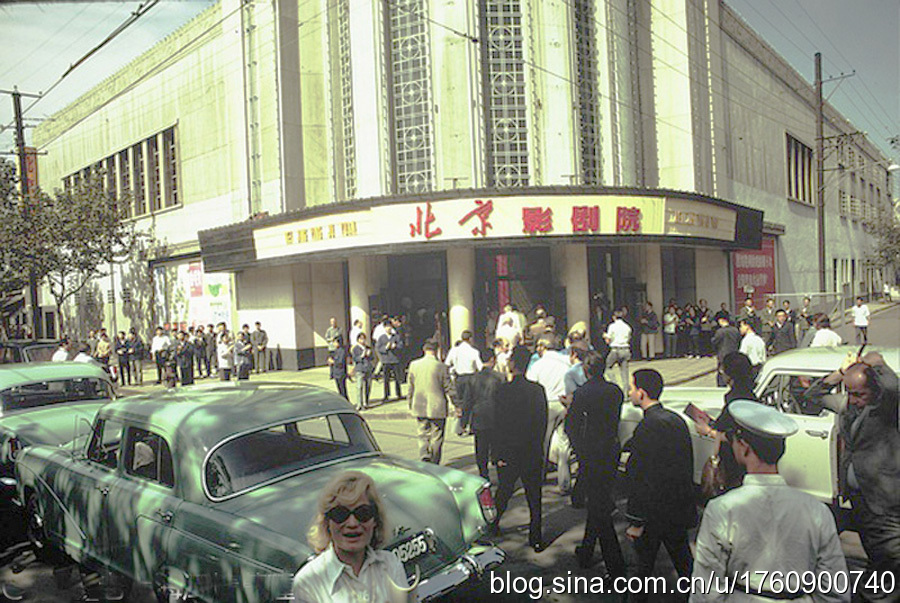 Former Majestic in 1973, when it was called 北京影剧院. Image: sina.com.

This article was written for the Shanghai Architecture Series in Magazeta. 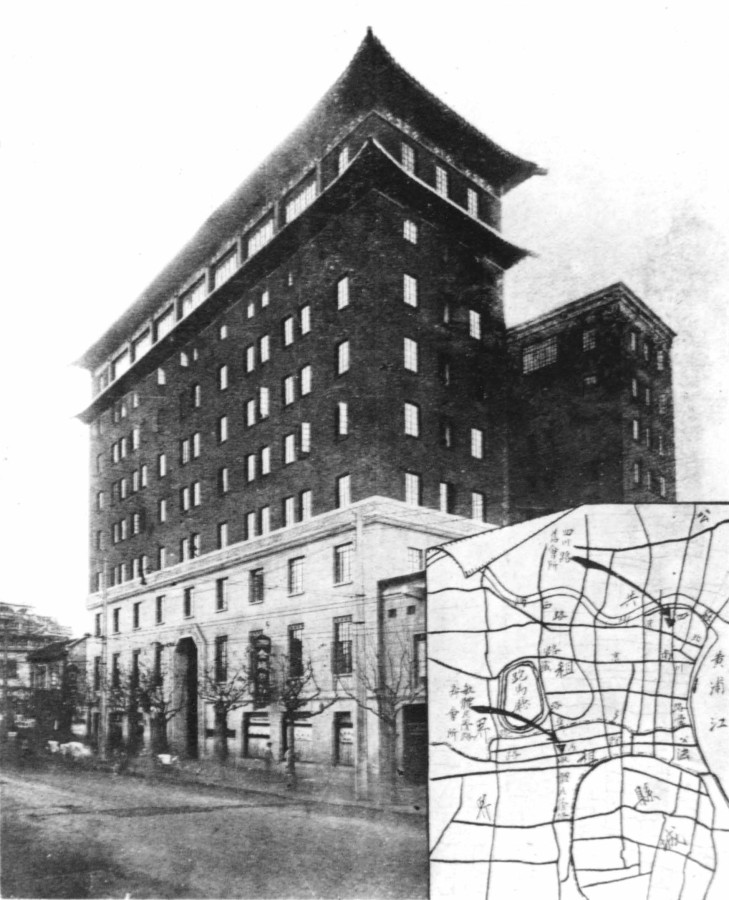 The tall brick building with the traditional roof, at the edge of the former Racecourse, was built in 1931 as the headquarters of the Chinese branch of YMCA. Its eclectic appearance attempts to marry Western and Eastern aesthetics, and this led to a spat between Shanghai's leading architects.

The YMCA expanded its mission to China in 1900, funded by Western-educated tycoons, such as Charlie Soon, the father of the powerful Song sisters. In line with the organization's original agenda, the Chinese YMCA worked to help provincial youth moving to Shanghai adapt to the pace and price of city life. It was believed that the first 24 hours in the metropolis are crucial for a young man's career (always a man, back then), so the Chinese YMCA provided cheap lodgings to young people and a range of wholesome activities to spend their energy. Supposedly, anyone could use the facilities, but a new member had to bring a recommendation from a respected citizen.

The Chinese YMCA offered lectures in politics and popular science, music and painting classes, secondary school classes, but the biggest emphasis was on team sports; the YMCA was a veritable incubator of sports talent. The Protestant agenda was embedded in the curriculum as well: values like individual responsibility and entrepreneurship, served to prep the Chinese youth for Shanghai's white collar pool. By contrast, the Foreign YMCA, located on the northern edge of the Racecourse since 1932, served a different clientele: American tourists traveling on a shoestring, sailors and foreign clerks. 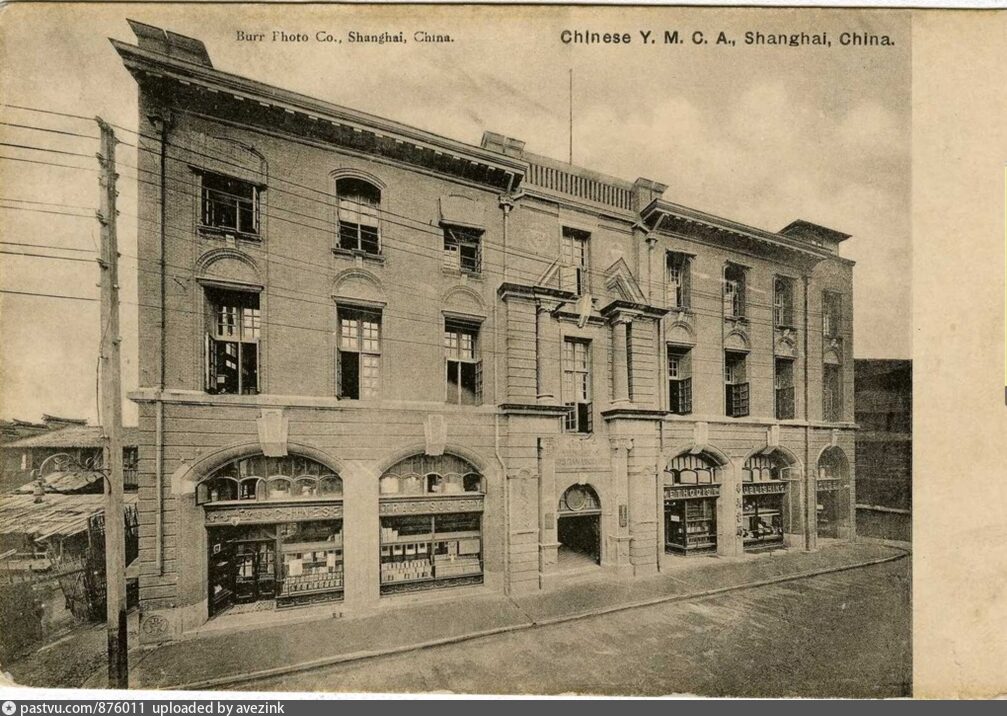 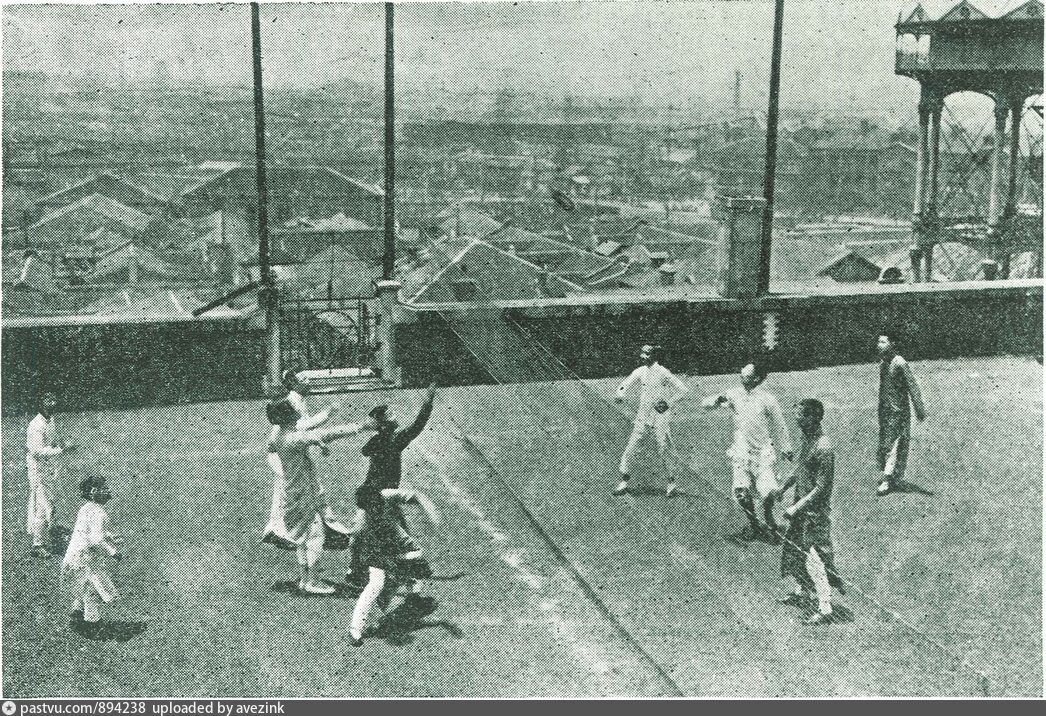 Playing volleyball on the roof of the Boys' Building of YMCA, on Middle Jiangxi Road. Image: Kautz Family YMCA Archives. 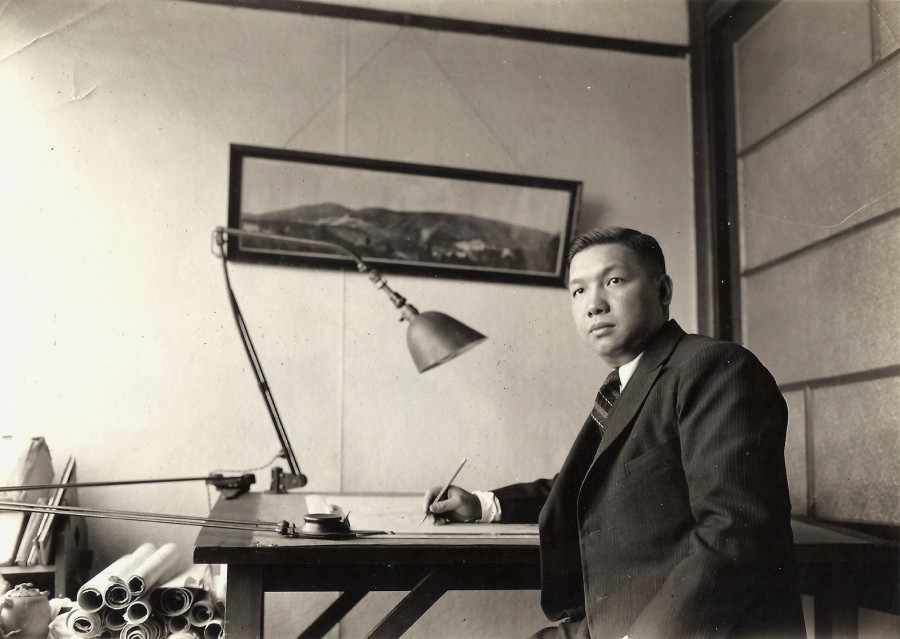 Poy Gum Lee at his work desk in Shanghai in the 1930s. Image: Lee Family Archives via nytimes.com.

The first Chinese YMCA buildings, built in the 1910s in the northern part of the central business district, are still standing on Middle Sichuan Road 四川中路 and Middle Jiangxi Road 江西中路, but by the 1920s these facilities were too small, so it was decided to build a larger headquarters and make it more accessible for the growing French Concession and the Chinese City. Three architects were engaged with the project, led by Poy Gum Lee (Li Jinpei 李锦沛), who was born in New York's Chinatown and studied in New York, Boston and Detroit. His whole family moved to China in 1923 and Lee was invited to head the architectural division of the YMCA. Both Robert Fan (Fan Wenzhao 范文照) and Zhao Shen (赵深) were mainlanders educated in Pennsylvania.

In May 1930, several hundred onlookers watched the laying of the foundation stone on an empty lot near the Great World amusement center. The new YMCA building promised to become the finest youth center in the Far East. In return for bringing this important public venue to the French Concession, the FMC donated 20,000 silver dollars out of the tax proceeds from dog races at the Canidrome and hai-alai games at the Auditorium.

The YMCA philosophy has always recognized the edifying effect of the architecture. To convey the relevance of the Protestant worldview in the Chinese environment, the design combined Western and Chinese construction methods and visual expression. The shape of the edifice evokes the Qianmen Gate 前门 in Beijing. The second floor halls had Manchu-style coffered ceilings, and the interior of the top-floor cafe was in the Imperial palatial style. The ground floor of the building accommodated two banks and a swimming pool; above them there were offices, lecture rooms, billiards rooms, exhibition halls; then there was a dormitory for 230 persons on five floors; the top floor was occupied by club lounges and the said cafe. 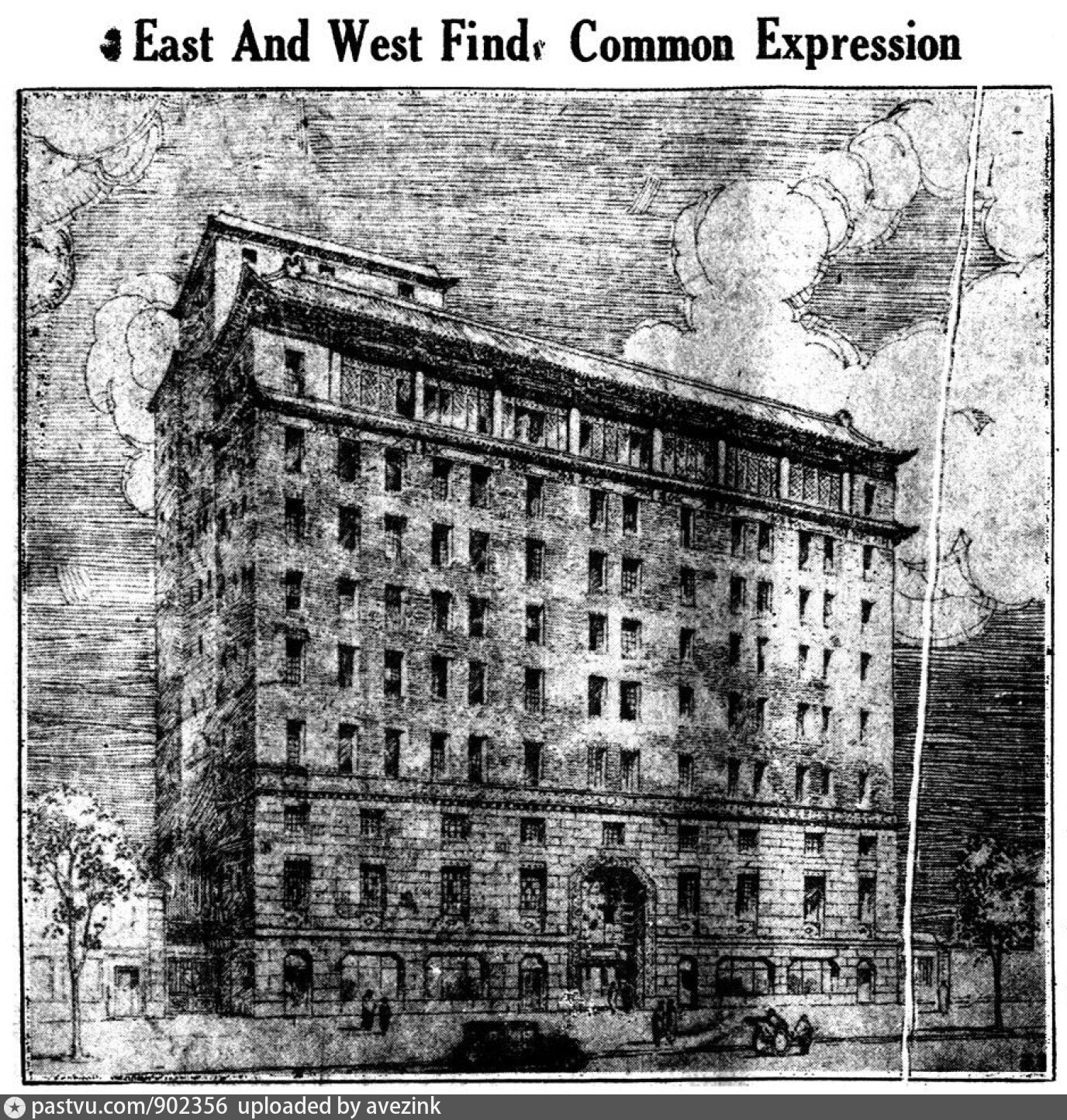 Architect's drawing of the YMCA building. Image: The China Press (1931). 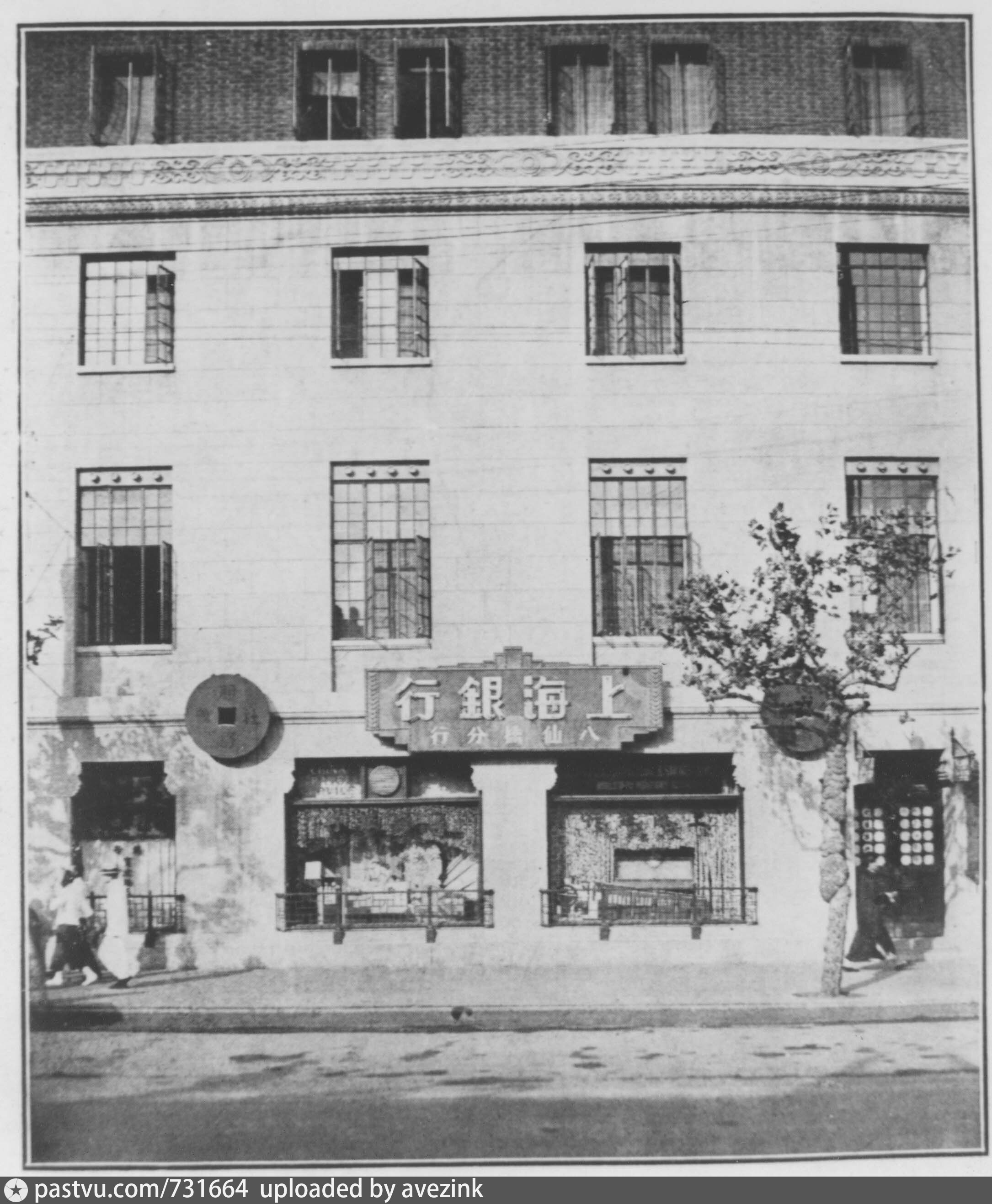 Bank of Shanghai in the Chinese YMCA building. Image: 民国图片. 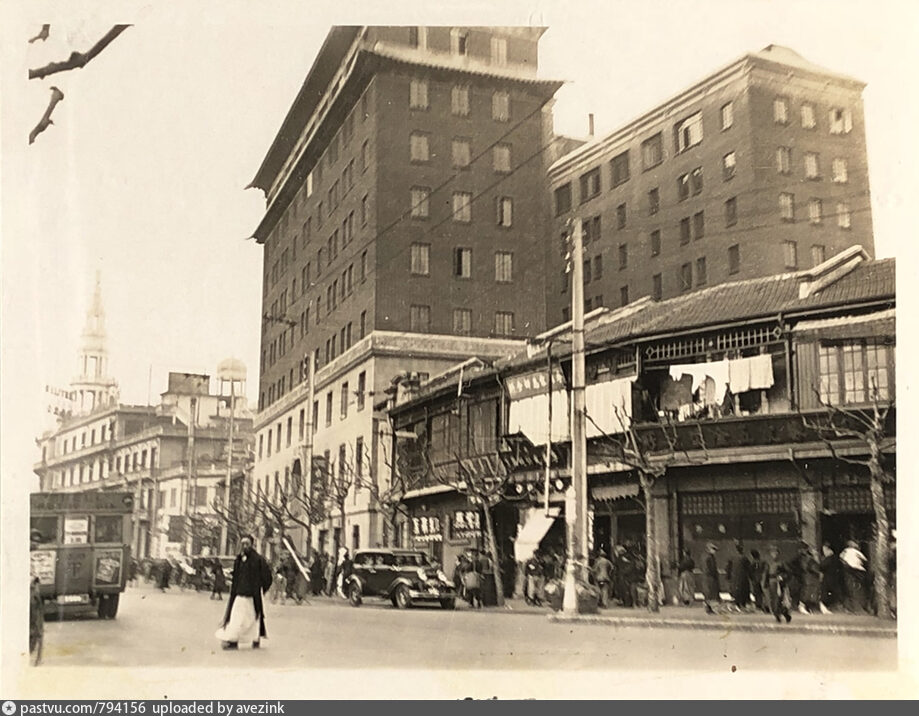 Boulevard de Montigny (Tibet Road) in 1932, with the Chinese YMCA and the Great World in the distance. Image: J. Arnold, C.A., via Virtual Shanghai. 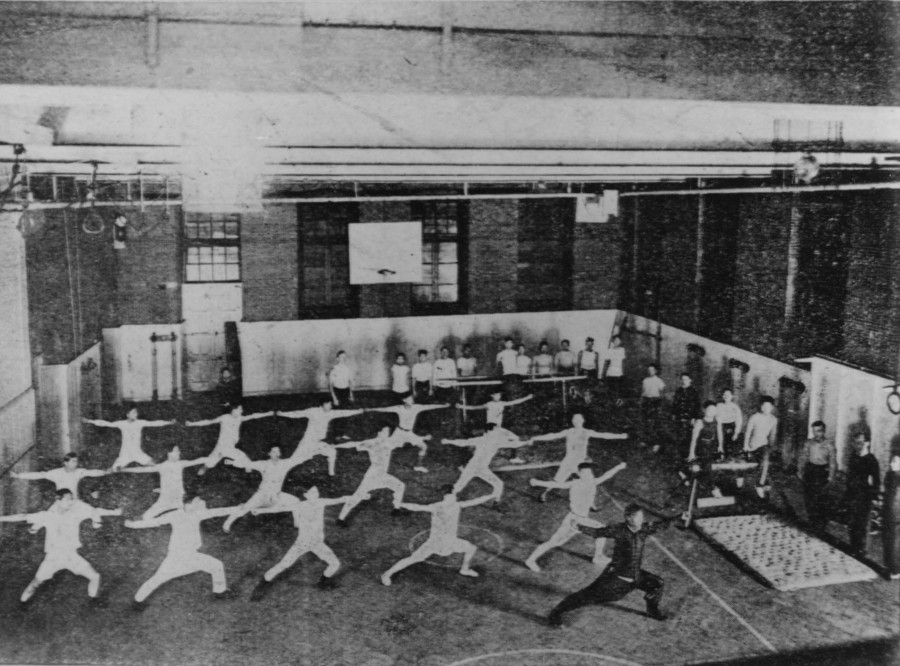 The nine-story building opened toward the end of 1931 and became the first in a string of high-rises in the "Chinese Renaissance," or "Chinese deco" style. During the construction, however, at least one of the project's authors, Robert Fan, grew disenchanted with this hybrid style. The trio of architects had a fallout which exacerbated in the following years. Fan stopped flirting with the Chinese aesthetic and called to put "science first, decoration last." His move toward stylistic purity can be observed in such buildings as the Nanking Theatre (1930), the Cosmopolitan Apartments (1932) and the Majestic Theatre (1941).

Fan's colleague Poy Gum Lee was more adaptable. His was involved with almost all YMCA buildings all over China, eleven in total, one of which is the Shanghai YWCA 女青年会 on Yuanmingyuan Road 圆明园路. Lee's business was hurt by the Japanese occupation and in 1945 he resettled in New York. He wanted to leave "tall buildings with big hats" behind, but his Chinatown clients favored the traditional Imperial look – upturned eaves, glazed tiles, colorful Manchu patterns – and disliked modernism and minimalism, which they lumped together with the hateful Communist austerity. Poy worked in Chinatown until his death in 1968, creating scrores of "big-hatted" buildings, which define the appearance of the district today.

The Chinese YMCA in Shaghai hosted a variety of cultural and educational events and even some high-profile weddings. There is a little Russian trace within its walls as well. In November 1932, an exhibition of Camilla Benois's paintings opened here. She was the wife of General Dmitri Horvat, who was the leader of the Russian diaspora in China and the former head of the Chinese Eastern Railway. The Shanghai press praised her vivid landscapes and flattering portraits, but most of all her sketches of Beijing street life. In March 1936, an odd party gathered to celebrate the launch of the Sino-Soviet Cultural Association: among the guests there were the Soviet Consul Ivan Spilvanek, the opera star Mei Lanfang 梅兰芳 and the gangster-cum-banker Du Yuesheng 杜月笙.

In the 1950s, the YMCA fell out of favor with the Communist authorities, but its roots in China were already quite deep. In 1978, the building returned under the control of the Chinese YMCA, which still occupies some of the offices, while the rest functions as a hotel. 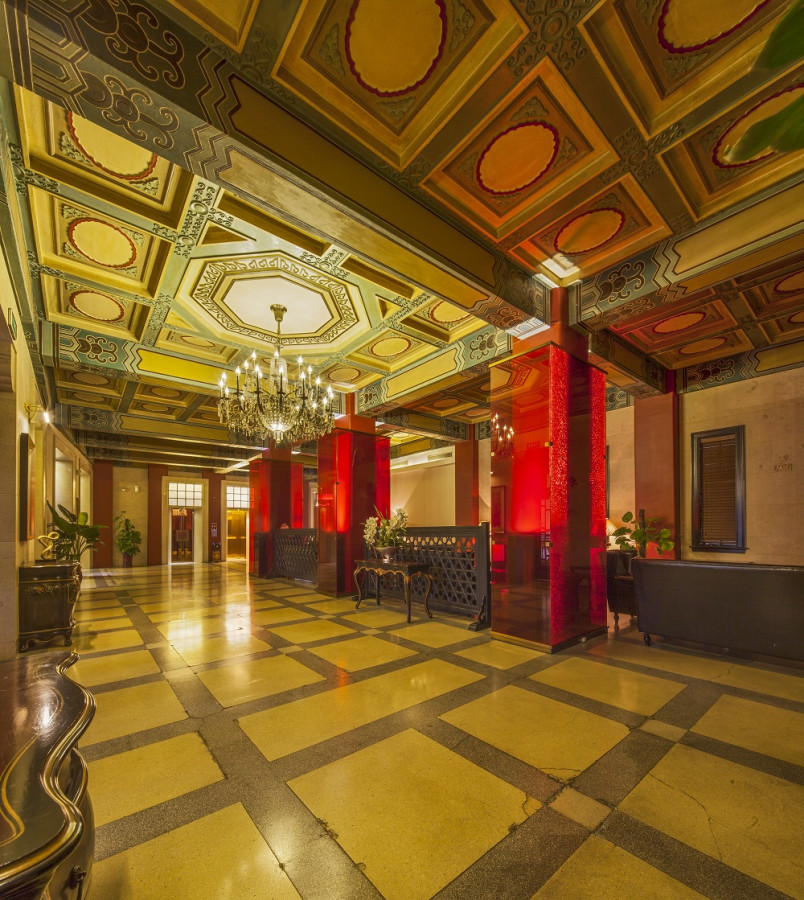 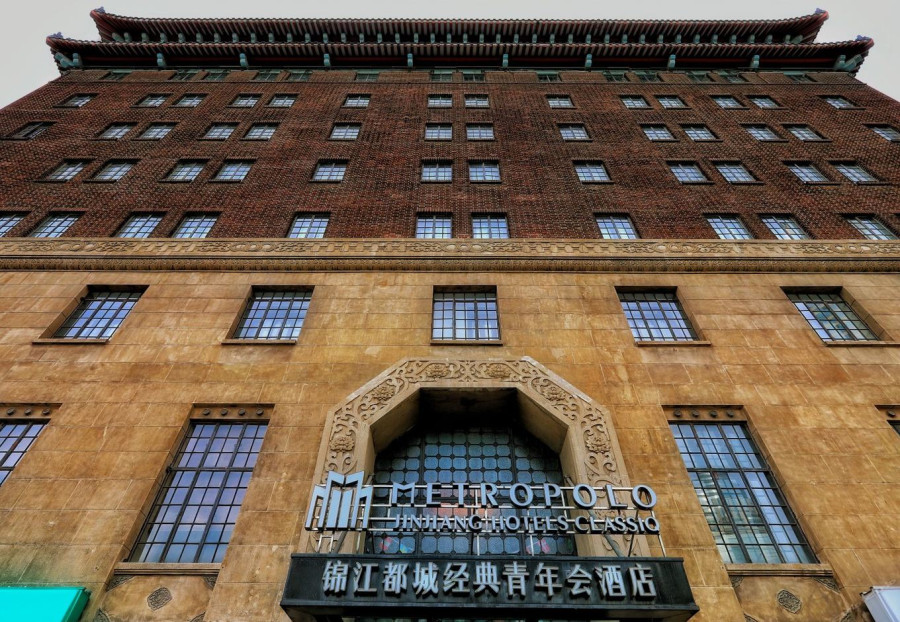 Facade of the building. Image: mafengwo.net.

See the original article in Russian for more images: https://magazeta.com/2019/03/arc-chinese-ymca/