Daughter: “...But you like Constantinople! You write about it very well.”
Teffi: “Dante wrote about the Inferno very well. It does not mean he liked it.” 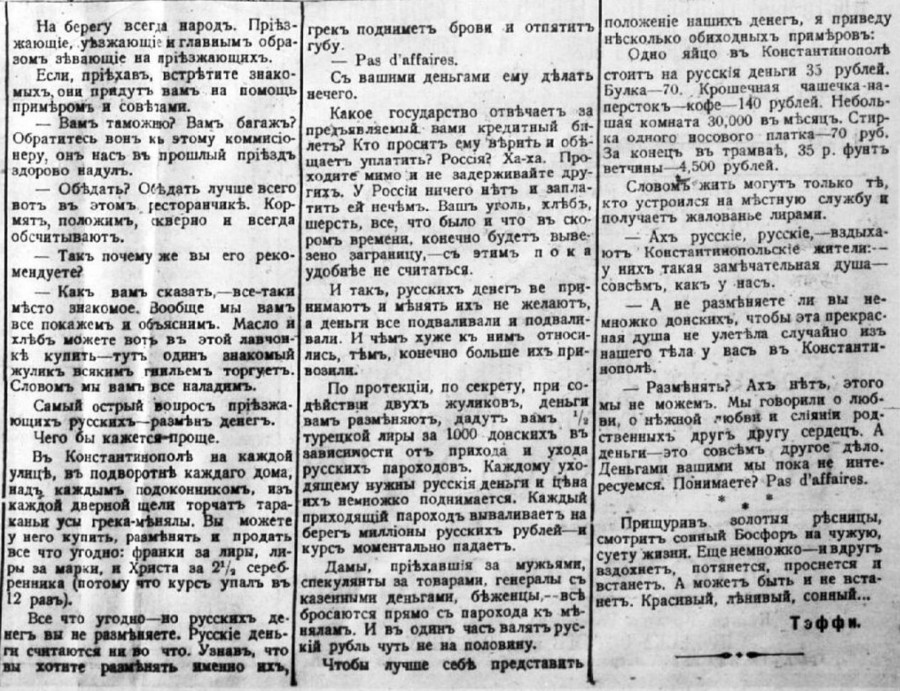 Foreign steamships are rattling and blasting their horns, motorboats are rushing, and quick Turkish boats are scurrying about. Yet the Bosphorus seems sleepy. It is always cloaked in a languid haze, as if squinting through its golden eyelashes at this alien bustle.

There is always a crowd on the shore: people arriving, people departing and people gawking at them. After you arrive, your acquaintances will rush to you with help and advice:

“Do you need customs? Do you need luggage clearance? Use this agent – he tricked us pretty well last time.”
“Do you need lunch? Try this restaurant – the food is pretty abysmal, and they always rip you off.”
“Then why do you recommend it?”
“Well, at least we know this place. We’ll show you everything around here. You can buy bread and butter at this stall – we know the crook who sells his rotten wares. Don’t worry, we’ll set you up.”

The biggest problem for the Russians is the currency exchange. It seems easy. Every street, every nook, every windowsill and every crack between the buildings has the long moustache of a Greek changer poking from it. You can buy, sell and exchange everything: franks for liras, liras for marks, Jesus Christ for two and a half pieces of silver (the rate has gone down 12 times). Anything you want – but not the Russian money. When the Greek sees it, he raises his eyebrows and sticks out his lip: “Pas d’affaires.” He won’t have anything to do with your money.

Which country has issued your banknote? Which state guarantees its value? Russia? Ah-hah-hah. Move along. Russia has nothing and can pay for nothing. Of course, all your assets – coal, wool, bread – will soon be transported abroad; that does not count – yet. But the Russian currency has no value and cannot be exchanged. Of course, the worse the rubles are treated, the more rubles the people are bringing.

If you have connections and know the right crooks, they might give you half a lira for a thousand Don Republic rubles, depending on the schedule of the Russian steamers. Departing passengers will need the rubles, so the rate goes up a bit. But each new arriving ship disgorges millions of Russian rubles, and the rate drops again. The ladies who followed their husbands, resellers of goods, generals with coffers of state money, refugees – everyone rushes to the changers straight from the docks, and in an hour they crash the rate to one half of the ruble’s worth.

To give you a better idea of the value of our rubles in Constaninople, here are some examples. One egg costs the equivalent of 35 rubles; a thimble-sized cup of coffee – 140 rubles; a small room to rent – 30,000 a month; to launder a handkerchief – 70 rubles; a one-way ride a tram – 35 rubles; a pound of ham – 4,500 rubles. Only those who work locally and receive their salary in lira can survive.

Constantinople dwellers sigh: “Oh, these Russians, they have such wonderful souls – exactly like ours.”
“Then would you care to exchange some of our Don rubles, to keep these souls inside their bodies?”
“Exchange? No, we can’t do that. We were talking about love and cohesion of the kindred hearts. Money is a different matter. We have no use for your money. Understand? Pas d’affaires.”

Squinting through its golden eyelashes, the sleepy Bosphorus watches the alien bustle. In a second it will sigh, stretch, wake up and rise – or maybe it won’t. It’s so beautiful, lazy and sleepy... 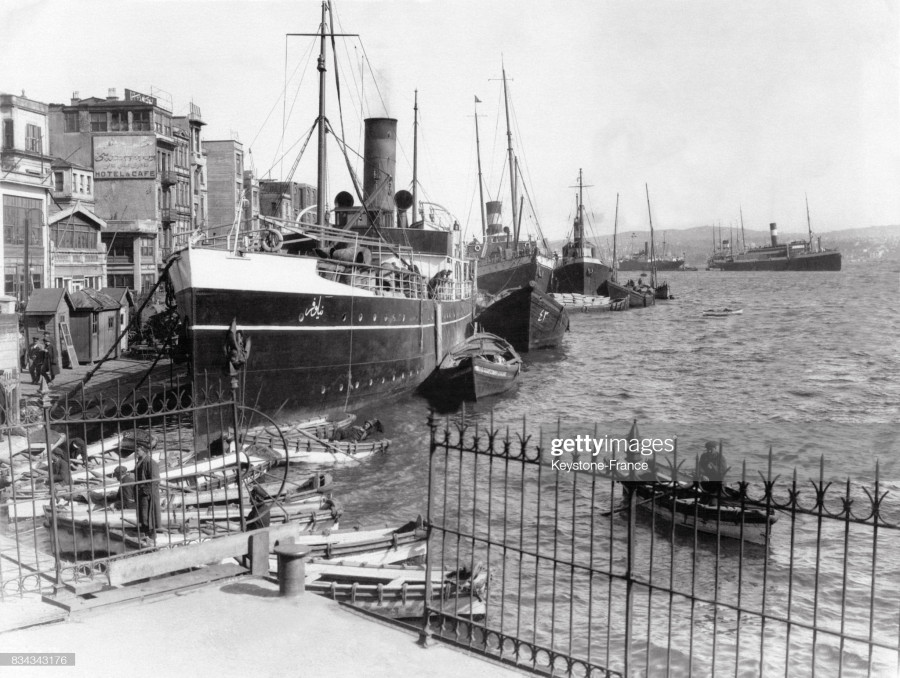 Posts from This Journal “emigration” Tag