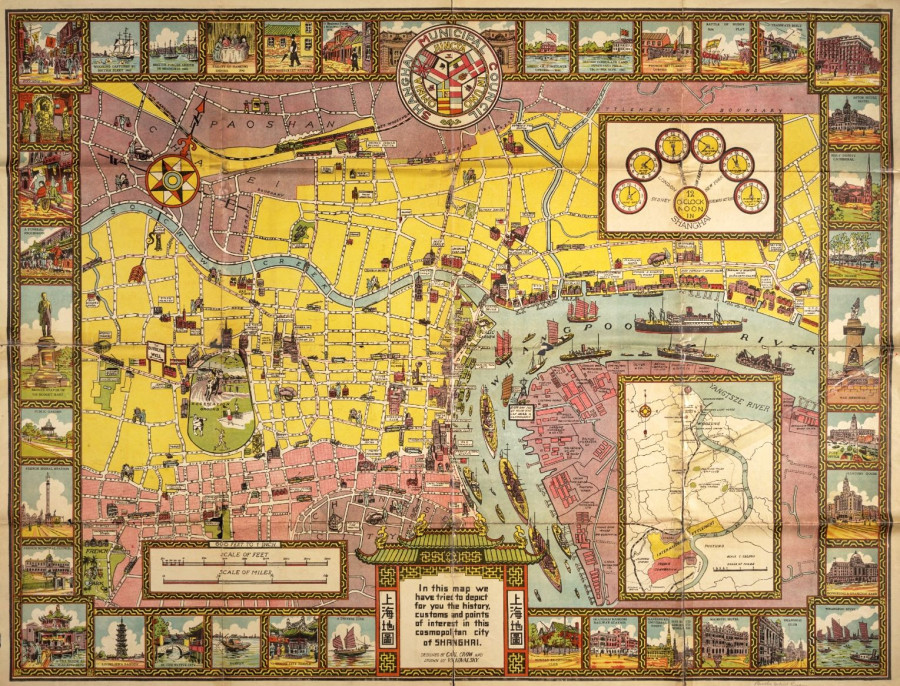 This spectacular historic map of Shanghai is everyone's favorite. It was produced by the American publisher Carl Crow and the Russian artist Vladimir Kovalsky. In September 1928, when this amusing map drawn to a scale of 600 feet to an inch hit Shanghai stores, it was called a "striking innovation." It was praised for its accuracy and "truly delightful" illustrations: "One sees on it a tram proceeding along Nanking Road and a motor bus as well, while in the green area of the Race Course are pictures of various sports to be seen there." The journalsts speculated if the designers were influenced by the story of Captain John Smith and Pocahontas, because "the French Park is illustrated by a stalwart of the Infanterie Coloniale most affectionately cuddling a charming Chinese lady!" The press encouraged the public to go ahead and spend 3 dollars on this map, measuring 94 cm by 72 cm: "What an ideal thing to send home! It gives one both a laugh and valuable information." 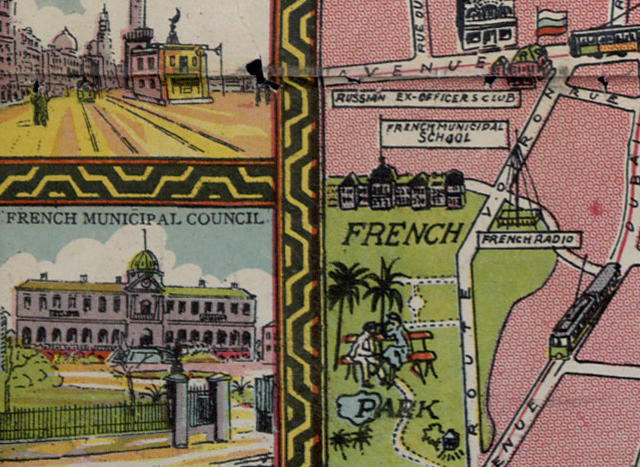 The artist Vladimir Vladislavovich Kovalsky (Владимир Владиславович Ковальский), who drew this map, was born in 1896 in Odessa. He was an artillery officer in the WWI and later struggled against the Bolsheviks as part of the White Army, whose defeat eventually brought him to China, alongside thousands of other ex-servicemen. In 1925, after a stint in Harbin, Vladimir Kovalsky found his way to Shanghai, where he headed the advertising department of Tobacco Products Corporation. In 1927, he became chief artist and head of the advertising department at the Carl Crow Inc. The production of the amusing illustrated map of Shanghai in September 1928 must have been a fun start of their five years of collaboration. In May 1932, aged only 34, Kovalsky died of a heart attack (the cause of death was initially mislabeled diphtheria in the obituaries). He had been well-loved member of the Russian community, and his passing was lamented. He left a widow in Shanghai, and his mother had stayed in Russia (later USSR).

Kovalsky & Crow map is now available in hi-res in many online collections, such as this one. For some reason, the year is given as 1935. If there were subsequent reprints after Kovalsky's death (I've found no evidence), they failed to reflect the changes in Shanghai's skyline that occurred in the seven years since its initial publication. We do not see the Cathay Hotel or the Broadway Mansions on the Bund, no Metropole/Hamilton circus on Foochow Road, no Park Hotel looming over the Racecourse... The map still has the Majestic Hotel (torn down in 1931), the French Municipal Council (torn down in 1934) and the old North Railway Station (destroyed in the warfare in 1932); Club Concordia is still standing on the Bund (demolished in 1935)... 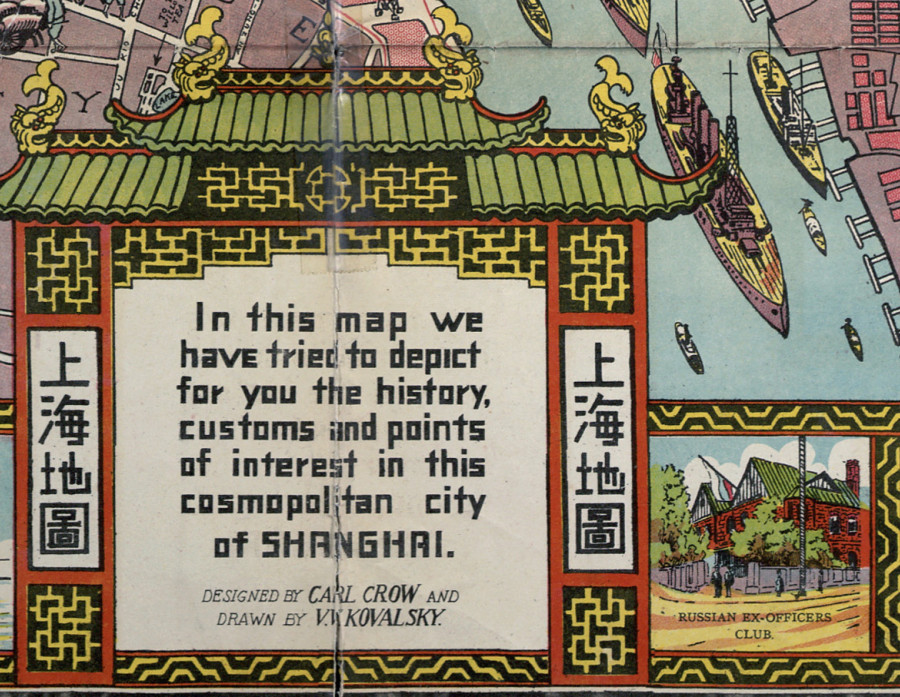 Among the vignettes on the edges of the map, depicting Shanghai's historical events and famous sights, the ex-officer Vladimir Kovalsky planted an "easter egg" – the image of the Russian Ex-Officers' Club, drawn right next to the publisher's statement. The Ex-Officers' Club was a social venue, then located on Avenue Joffre, on the southwest corner of Route Voyron; its location is shown on the French Park fragment above.
Collapse