The Soviet journalist Lydia Seifullina spent the autumn of 1924 in Turkey. Her travel reports from the "land of the vanishing Islam" appeared in the Tiflis (now Tbilisi) newspaper Eastern Dawn ("Заря Востока") from August to December 1924. Seifullina's vivid travel writing so inspired the popular poet Sergey Esenin (then living in Tiflis on a propaganda assignment) that he petitioned the Soviet party authorities to be dispatched to Turkey, "to see the Orient with his own eyes". His multiple requests were denied, however, with the justification that "one Soviet reporter in Turkey is plenty." 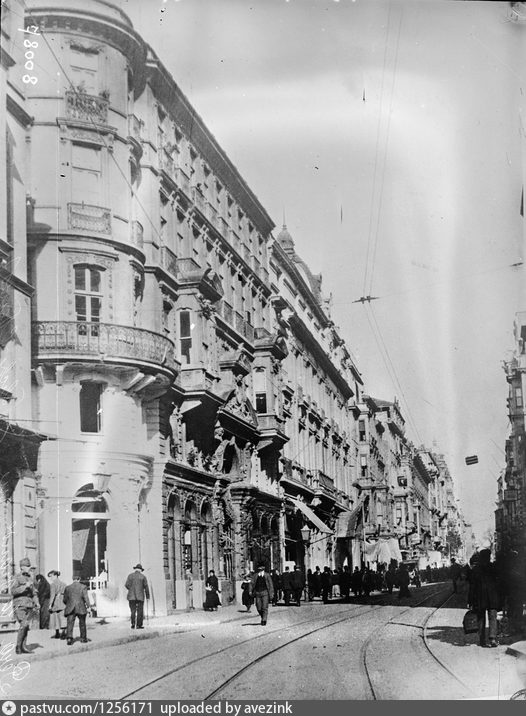 Pera is the main street here. It is very narrow, lined with tall buildings built in a European fashion. When a tram approaches you cannot walk close to the edge of sidewalk, or it will knock you over. The pedestrians often have to trod in a file, one after another, because the sidewalks can be as narrow as footpaths. Luxurious stores on both sides throw all kinds of European delights in your face. The jewelry stores are ablaze with golden ornaments and gemstones. Colorful and lustruous fabrics billow in the vitrines. Flower shops smother you with fragrances and colors. Not a single Turkish shop in sight. All the vendors are westerners, Greeks and Armenians.

Well-dressed people crowd the sidewalks. You mostly hear French and Russian. Despite the fact that many émigrés left as soon as the Armistice regime ended, many stayed on. Some stores have put a sign in the window, "Russian spoken here." A narrow aley redolent of French and Oriental perfume and the smell of wilting flowers, filled with powdered and bared feminine "internationale" and dandyish men in fez hats and fedoras, all of them compressed between the luscious shop windows – too depressing for words. Foreign languages torment the ear. We thought we were going to Turkey and we found ourselves in Babylon."

"Some entrepreneurial engineer Georgy Karpovitch opened a restaurant in Constantinople. He hired pretty and well-educated young women, from the bankrupted Russian nobility, as waitresses. They usually could speak several foreign languages besides the obligatory French. The engineer hung the sign "George Karpitch" above his door and added the Russian sign "Русский ресторан Карпыча". He designed the uniforms: a flowing low-cut silk dress, tied with a sash, with open arms and cute pockets. His profits soared. Every night the restaurant was overflowing with Russians and foreigners.

Refreshingly, the servers did not take tips: the percentage was embedded in the dinner price. But the staff was underpaid. Evidently, "Karpitch" was a little stingy. When the serving girls asked for a raise, he refused. When the waitresses went on a strike, he started hiring others. Then the strikers opened their own restaurant on Grand Rue du Pera, calling it La Turquoise. Every skill they learned at Karpitch's was invested in this place. And the Karpitch restaurant is now empty, while the new La Turquoise thrives. The dishes here are more abundant and cost less than in the Greek and Turkish restaurants.

The overall atmosphere is rather elite. The waitresses' noble titles are whispered into the visitors' ears. If you are new here, some helpful finger will point out the goddaughter of the Grand Duke Nicholas. The servers are exceptionally courteous – especially to the Soviet visitors. You had to see the face of that aristocrat lady who served our dinner! Attentive to the point of obsequiousness, she lowered her eyes every time she heard the word "comrade".
Collapse