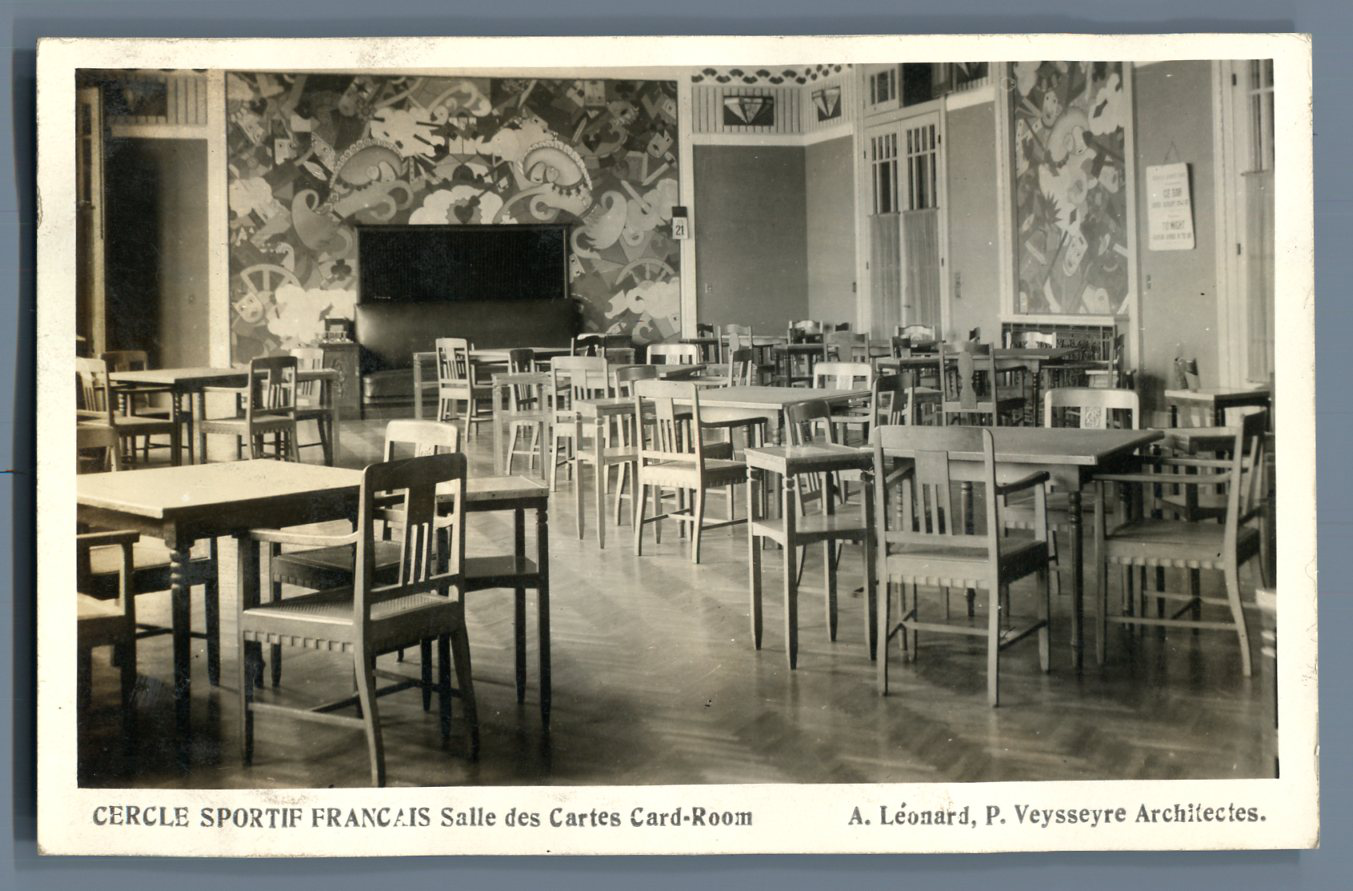 The above postcard shows the card room in the French Club, which opened in January 1926. Here is what the North-China Herald had to say about it:
"So far as the card room is concerned we shall be afraid to play in it unless provided with blinkers to concentrate attention on the game. Three highly unique panels which court card motifs, done in excellent colour, form the chief attraction of the room and are such as to distract anyone's mind from the game and would do so, probably, if the pictures were not as restful as the balance of the room." (Yes, the writing is terrible.) 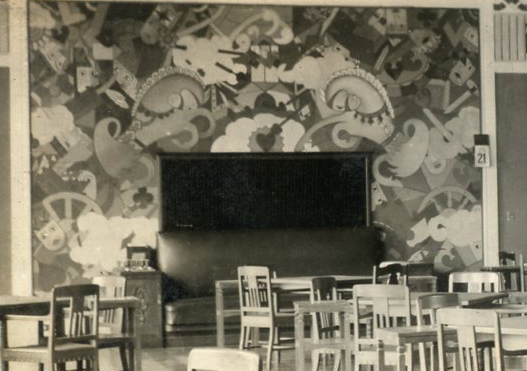 The thing in the center looks like a flat screen, doesn't it...

Here is the photo showing all three panels (click to enlarge): 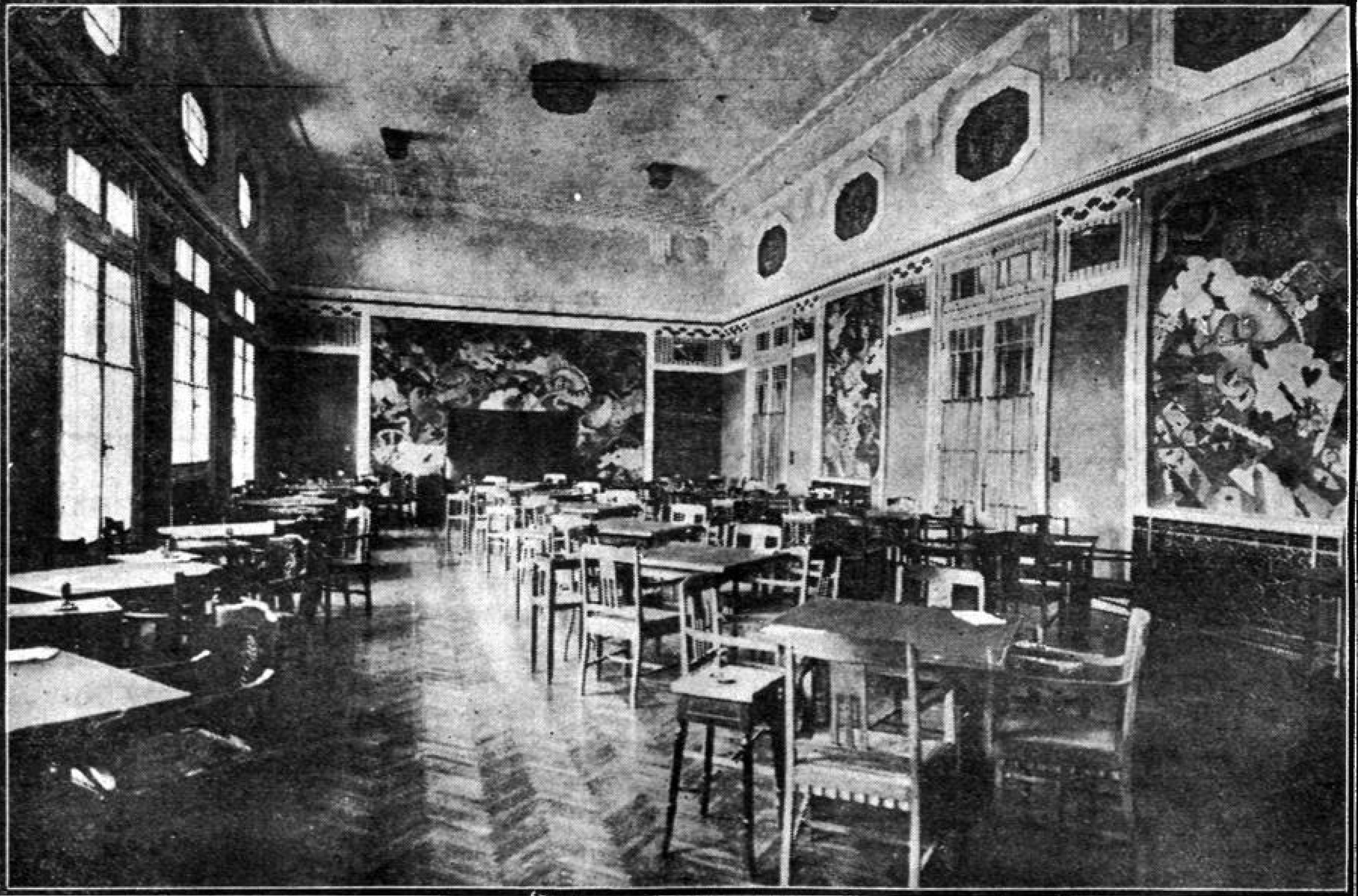 Who is the artist?

[Continue reading...]
According to the China Press, "the artist responsible for the colorful wall paintings in the card room and tea room and several other parts of the building is Mr Podgoursky, while his colleague Mr Stupin has also painted several of the interior decorations."

While we know quite a lot about Victor Podgoursky, Mr. Stupin (Ступин) is a bit of a mystery. Apparently, he specialized in religious painting; he created the highly acclaimed murals for the Orthodox Сhurch of the Protection of the Virgin in Tianjin. Back in Shanghai, his work on the wall panels in the second-floor foyer of the French Club received a special mention in the North-China Herald:

"It is difficult to know whether to admire the panels in colour of M. Stupin most, or the Atlantidae which top the marble pillars in a green gold. M. Stupin's pictures are modernist – about nothing in particular, but relying on tine and mass of colour for the valuable addition to the decoration of this noble apartment."

Below is the press photo of the second-floor foyer (click to enlarge). I'm not sure which ones are Stupin's artworks – probably those in the vertical rectangular panels on the walls? 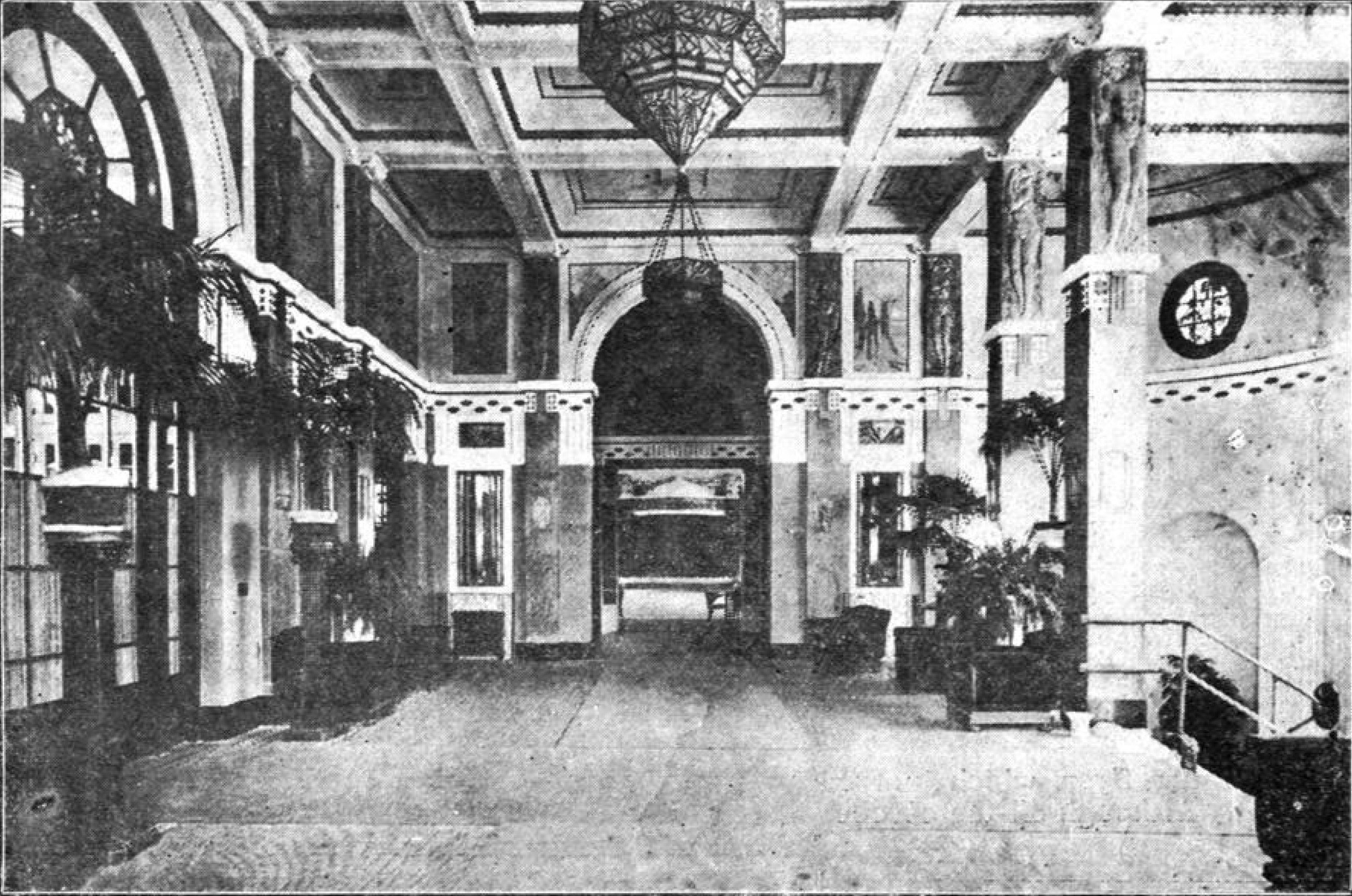 The Atlantidae on the columns could be the work of the artist Valentin Shabaeff-Firsoff (Валентин Шабаев-Фирсов; 1891–1978), whose "delightful modeling" was scattered throughout the club – for instance, above the fireplace in the club’s library. Prior to coming to Shanghai in 1923, Shabaeff had lived in Harbin, where he practiced drawing, illustration and sculpture. In 1929, he relocated to Canada, where according to the Gilden’s Art Gallery, together with his wife Sonia he maintained a studio in Montreal and "represented Canada with painting at the New York World’s Fair in 1939." He worked as a painter and sculptor, and produced ceramics, reliefs and murals.

Recalling his Shanghai work for the 1947 publication in Canadian Art, Shabaeff mentioned "designing, among other works, bronze sculptures for His Majesty's Hotel [Majestic Hotel?!] and a stone facade for the Chinese Customs House at Shanghai" [what?!]. If true, this is pretty amazing and needs further research. That article continues: "Uncomfortable in the climate of the Far East, he came to the United States and later settled in Montreal." More details about Shabaeff's work in Vancouver and Montreal can be found here.

The original murals and stained glass have by now disappeared from the former French Club. Only the sculpted Atlantidae are still found in their places, featuring in the frequently told stories about prudish Communists who requested to have them covered in anticipation of the party officials’ visits in the 1950s. Some experts, however, point out that the sculpted maidens we see today are not the original ones! Well, in this case, they have been recreated quite accurately. Here is a recent photo of the second-floor foyer, taken by Shanghai Sammy: 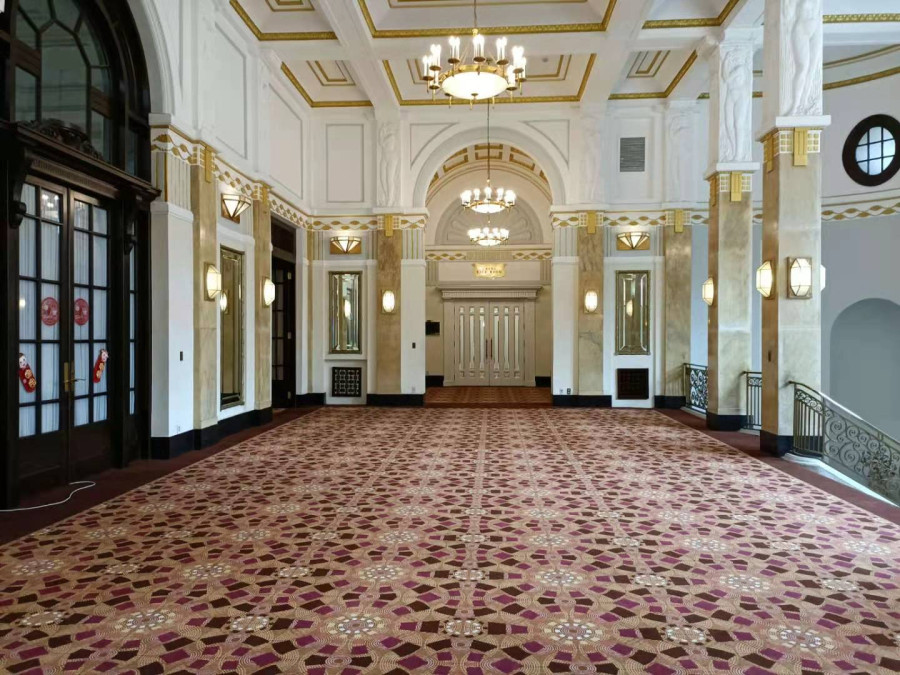 Recently, I showed yet another richly decorated room in the French Club in 1936. Here, the wall decor might be Stupin's work, while the relief vases could be Shabaeff's. 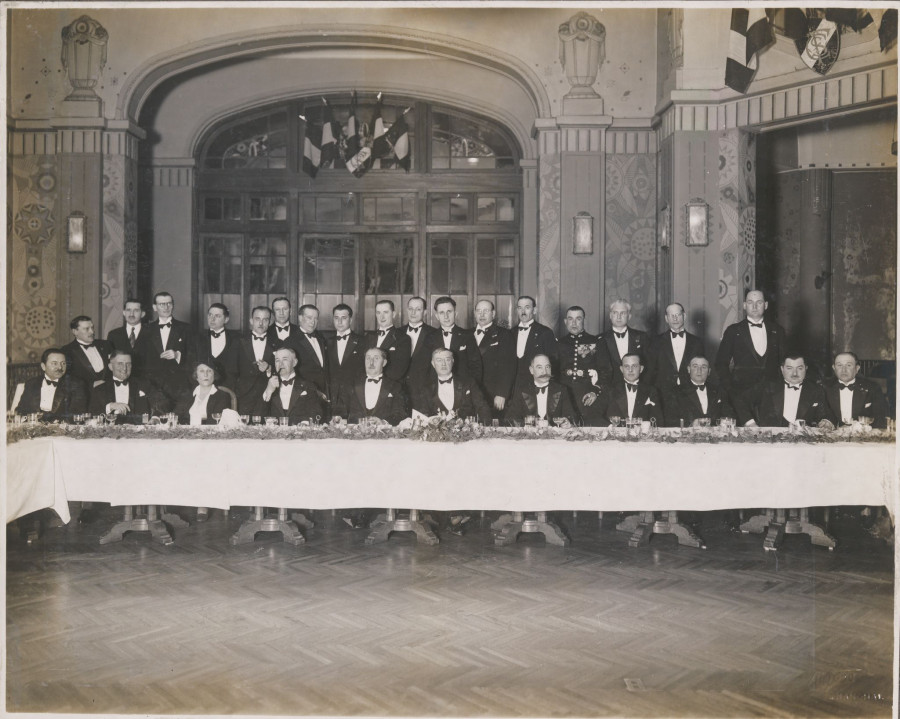 And here is the same room now, identified as the Jasmine Room by Shanghai Sammy: 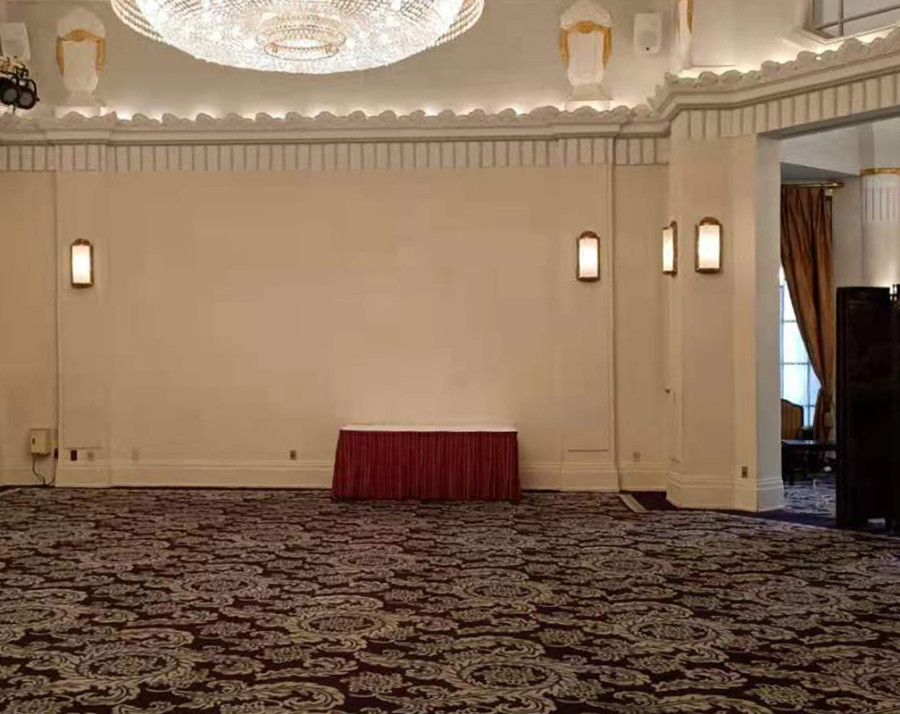 The changes in the decor over he course of 85 years are critiqued in this entry: French Club interior then and now (1936 vs. 2021).

Here is a portrait of V. A Shabaeff-Firsoff at work in the early 1920s, in Harbin: 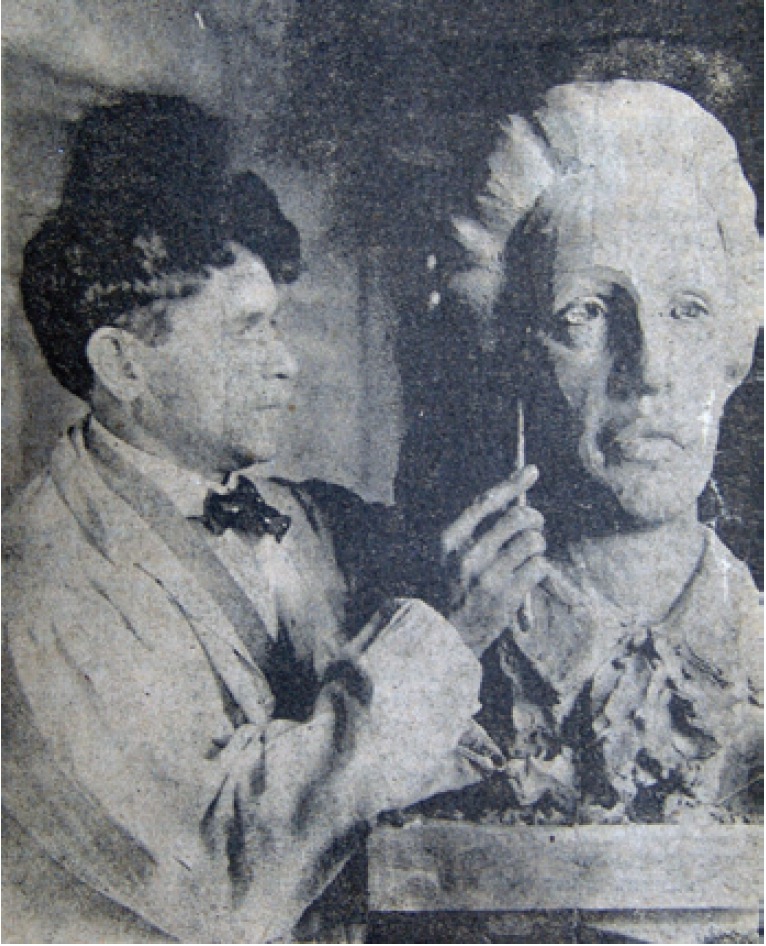