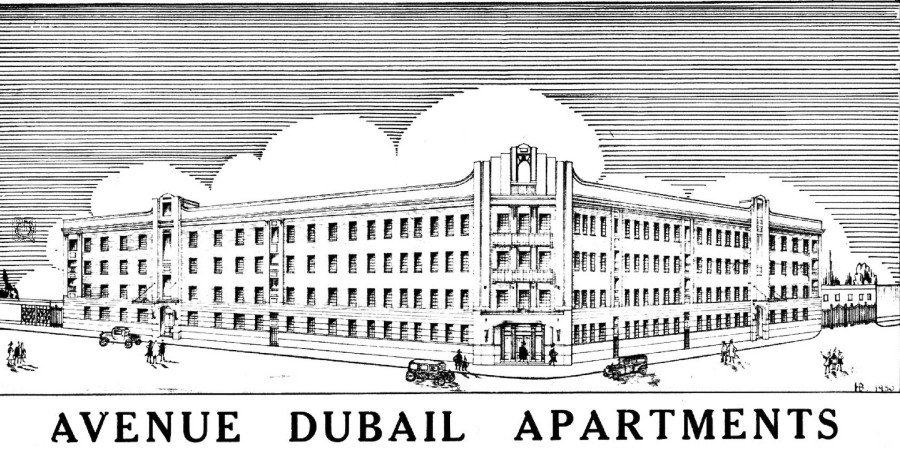 The name of Agnes Smedley, the renowned American writer and activist, is often mentioned in the connection with Dubail Apartments, the historic building on the southeast corner of Chongqing Road (former Avenue Dubail) and Fuxing Road (ex-Rue Lafayette). Agnes Smedley, however, never lived in this building. According to the CIA, she lived at 85 Avenue Dubail (old numbering) between May 1929 and May 1930, and back then Dubail Apartments did not exist. Where did she live then? There was a boarding house at that address, in the mansion of the retired French doctor H. Fresson. The American Gertrude Binder moved in there first, and she invited Agnes to be her roommate:

When she arrived in Shanghai in early May of 1929, Smedley went immediately to the French concession area, in hopes of diminishing the effectiveness of British surveillance tactics. Her first step was to look up Gertrude Binder, a young student that Scott Nearing had told her about in Berlin. Binder was working for the most important U.S.-owned newspaper in Shanghai, the China Weekly Review, and was a stringer for a few Midwestern newspapers in America. Smedley proposed that they live together on the second floor of a rooming house on 85 Avenue Dubail, Binder's present residence. Problems soon arose, because Smedley was not alone: she had brought with her a young Chinese writer she had picked up in Mukden, who had been serving her in the dual capacity of translator and lover. This arrangement was soon abandoned. But the young Manchurian's departure did not bring calm to Avenue Dubail. Smedley, still sexually defiant after her experiences in Berlin, told Binder that she intended to "take sex like a man".  For several weeks she seemed to bring home "anything in pants that she found around town".  Binder remembered that one night a young Marine suddenly bolted from the house, frightened by Smedley's aggressive advances. As in New York in 1919-20, however, Smedley soon became satiated and disgusted with herself, and by midsummer her liaisons became longer and more meaningful. (Source)

We don't know what the boarding house looked like, but here is a 1920s map showing the corner lot where Dubail Apartments later emerged: 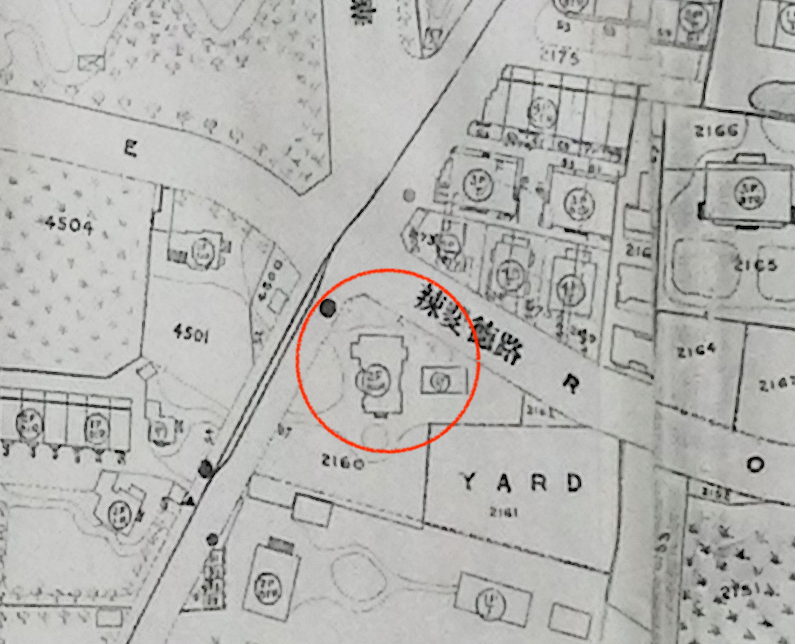 The plans for the construction of Dubail Apartments were first publicized in 1926 – it was meant to be a seven-story building – but the problems with financing postponed the construction until 1930 and cut the building's height to four floors. By that time, Shanghai's architects had turned to modernism (art deco), so Dubail Apartments, which opened for occupancy in mid-1931, looked a little old-fashioned. This was compensated, however, by the supreme quality of the construction, the thoughtfulness of the layouts and the expensive finish. The 49 apartments on four floors ranged in size from from 2 to 5 bedrooms; all had servants' quarters. There were telephones, pre-installed electric appliances, refrigerators in the kitchens and even built-in garbage chutes (not very common in Shanghai). All rooms had hardwood floors, while shared areas and service rooms had mosaic floors. Almost all apartments had balconies facing the interior courtyard and the private garden; there were also garages and a rooftop garden.

The author of the design was Hans Berents (1880–1957?), a construction engineer from Norway who had a lengthy career in China. The Norwegians were not very numerous in Shanghai, coming close to 300 people by the end of the 1930s, and Berents was a prominent member of the community and the only architect among them (to my knowledge). Having started with the Anhui Railways, in the 1910s he opened his firm Hans Berents: Consulting Civil Engineers, Architects, Surveyors, Land and Estate Agents (柏韵士工程师), with an office in downtown Shanghai. His projects included godowns (warehouses), schools and apartment buildings, some of which survive to this day.

[See the projects of Hans Berents...]
Project of an apartment house on Rue Corneille (Gaolan Road 皋兰路), unrealized, published in 1926: 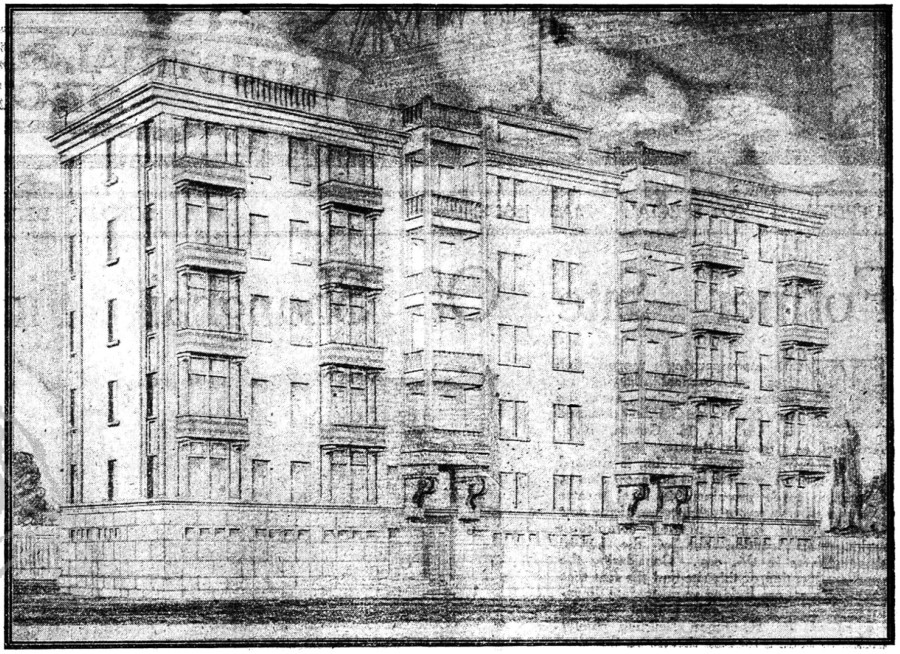 Carlowitz Godown, built in 1926 at the foot of the Sichuan Road Bridge: 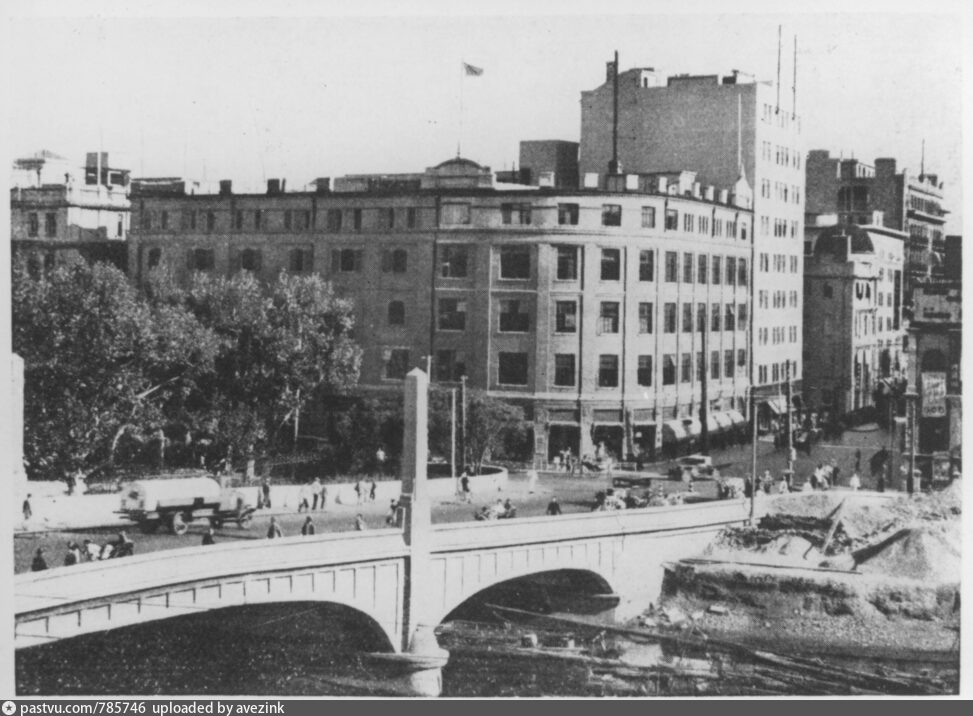 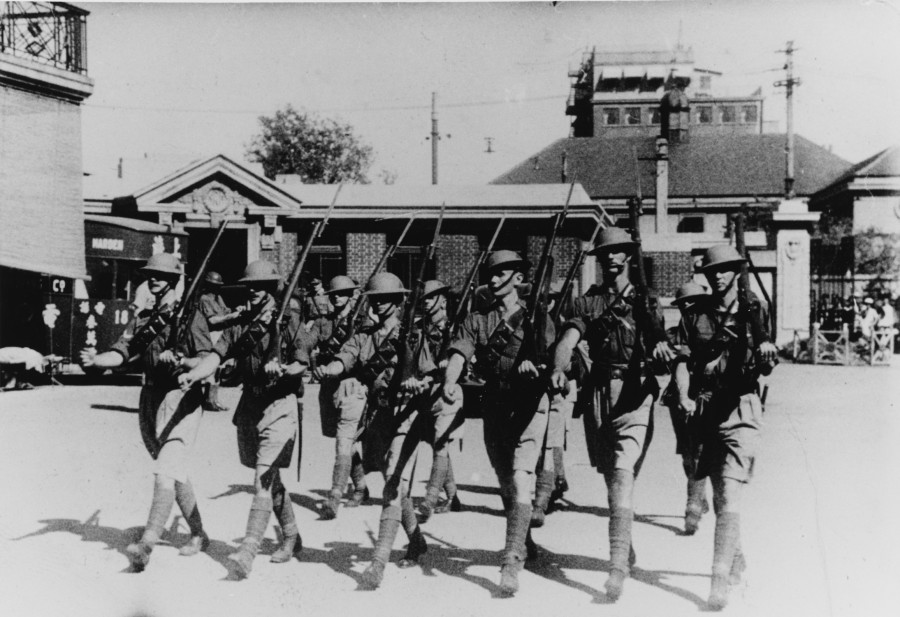 Russian School on Avenue Petain, built in 1932–1933 and now buried under Xujiahui Park: 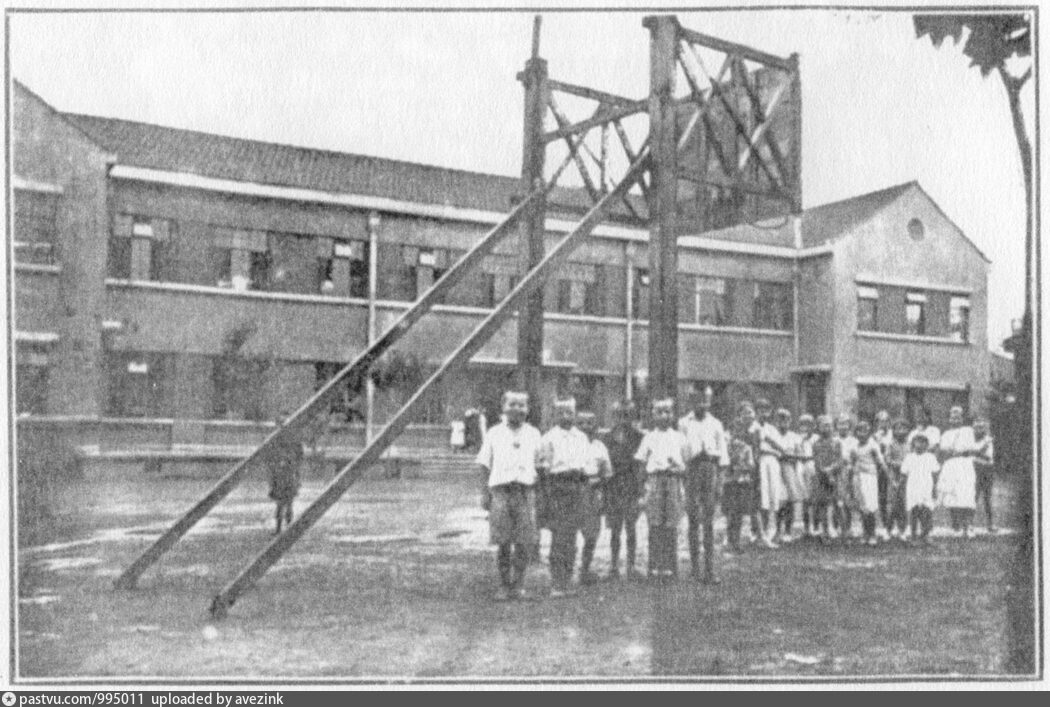 Besides practicing engineering and construction, Hans Berents served as the Land Commissioner of the Shanghai Municipal Council (SMC), duly re-elected every year until the 1940s. Always full of good ideas, in 1921 he tried to convince the SMC to build a bridge across the Huangpu, to finally connect Shanghai to Pudong and make it accessible for trucks, cars, pedestrians and even trams (nobody wanted to bear the cost, naturally). In 1930, he called for the registration and certification of all practicing architects in Shanghai. In 1937, he joined the committee for the creation of a safe haven for the Chinese refugees affected by the Japanese warfare (Jacquinot zone). He was also president of the Rotary Club in 1936–1937, one of the founders of the Norwegian Society in Shanghai and the only Nordic person to become president of the Architectural Society of China (1929–1930).

Berents was a Major at the Shanghai Volunteer Corps – and very courageous. In 1934, using only his fishing knife, he managed to arrest a gang of six pirates armed with guns, in the Chinese province. The Republican government praised his heroism and gave him an embroidered banner. The next year, he chased armed gangsters in the French Concession after they fired at him several times. On August 23, 1937, at the violent onset of the Japanese occupation, Berents was driving along Nanking Road and passing the Sincere Department Store, when bombs fell and his car was torn to splinters. Having narrowly escaped death, he got out of the car and started assisting the bleeding victims all around him.

Hans Berents had a wife Petra, sons Hanspeter (Hans Petter), John, Odd Rein and Eli-Kristian, and daughter Lillemor. He retired in Norway in 1947, and soon Shanghai newspapers were reporting on his new favorite pastime – fishing salmon in the Stryn River. His extensive collection of Chinese antiques is now in a museum in Oslo. Since the construction of the elevated highway in front of the former Dubail Apartments in 1998, the building no longer has views of the lovely French Park, yet many still appreciate its value. The apartment house now has five floors instead of four. When did the red star appear above the entrance? Maybe Agnes Smedley painted it. 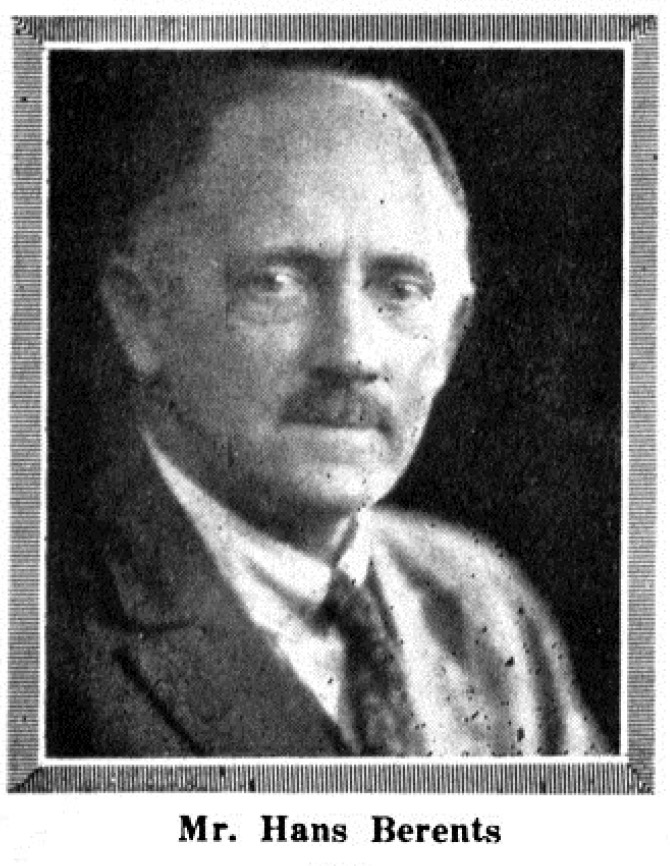 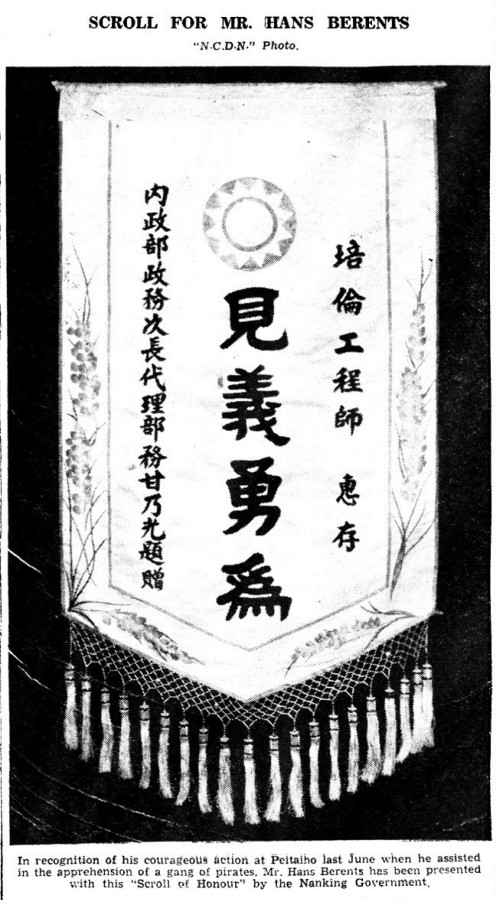 The Nantao refugee committee in 1938. Hans Berents is standing in the back, center; Father Jacquinot is sitting, in a beret: 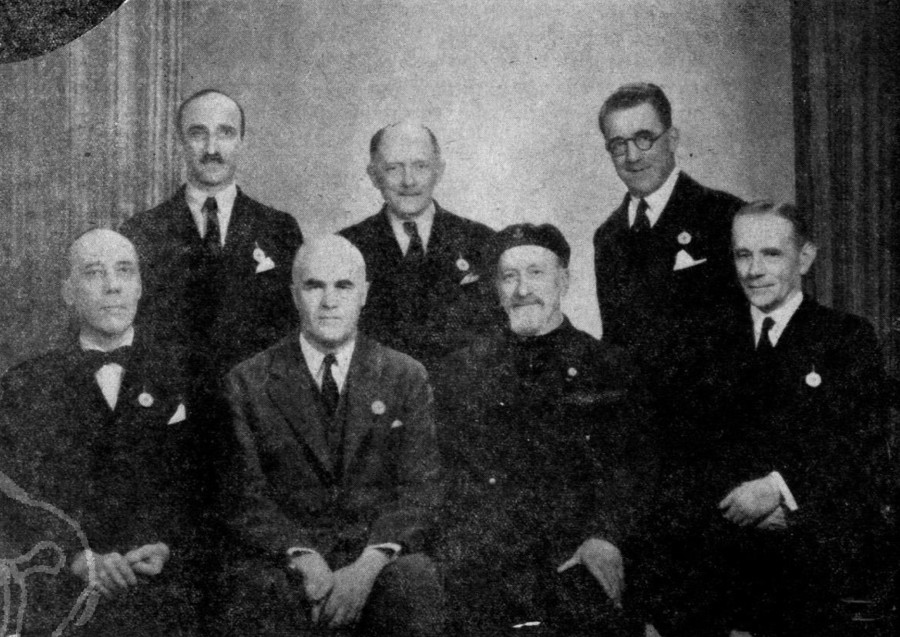 A Norwegian Society cocktail party in 1939. Left: son John Berents with wife; Hans Berents in the center; son Odd Rein with wife on the right. 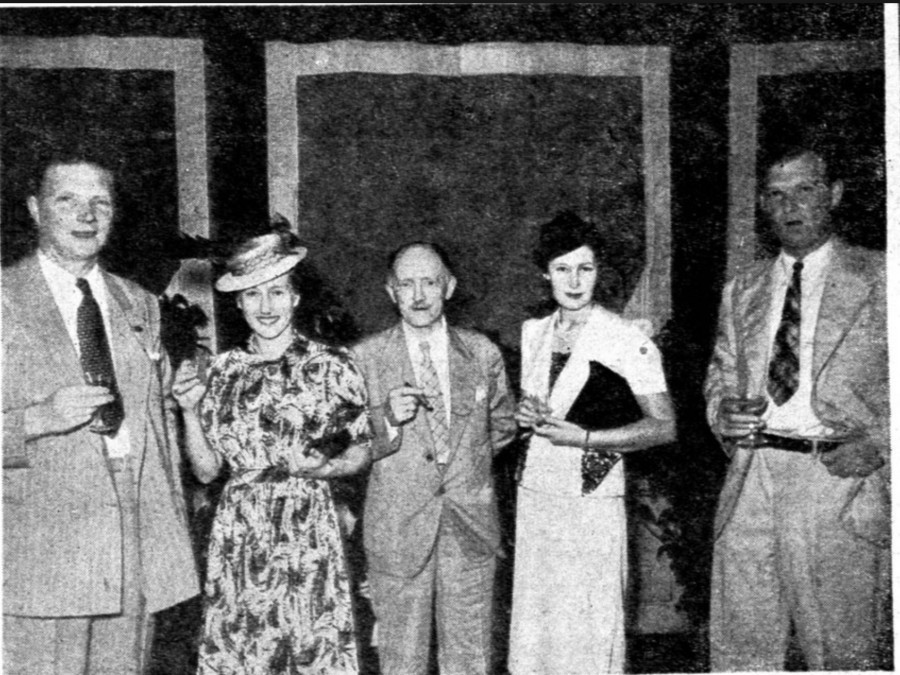 Few historic images of Dubail Apartments exist – I wonder why? This view along Avenue Dubail shows its corner entrance in the distance: 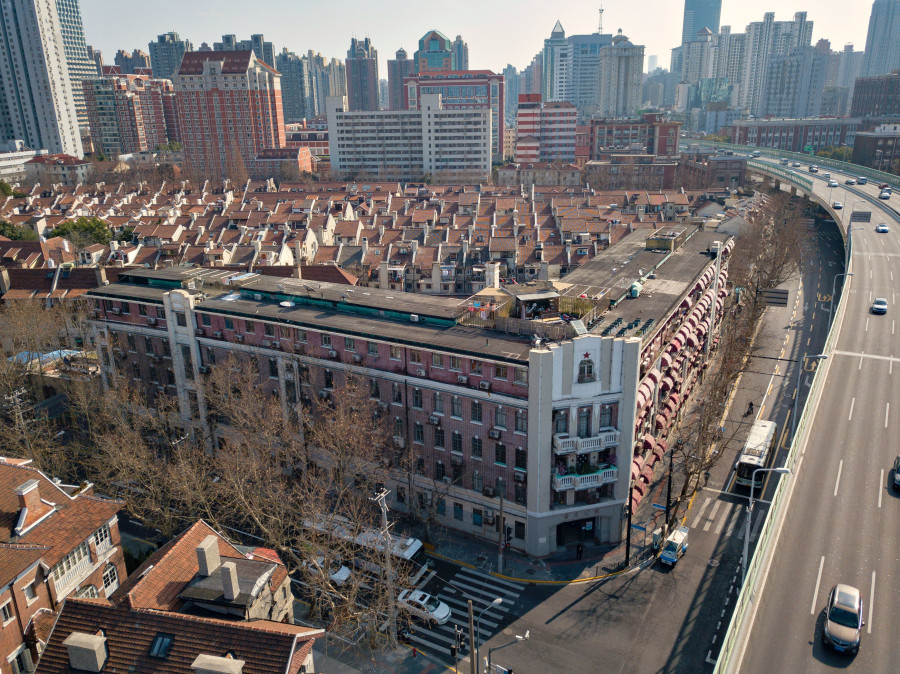 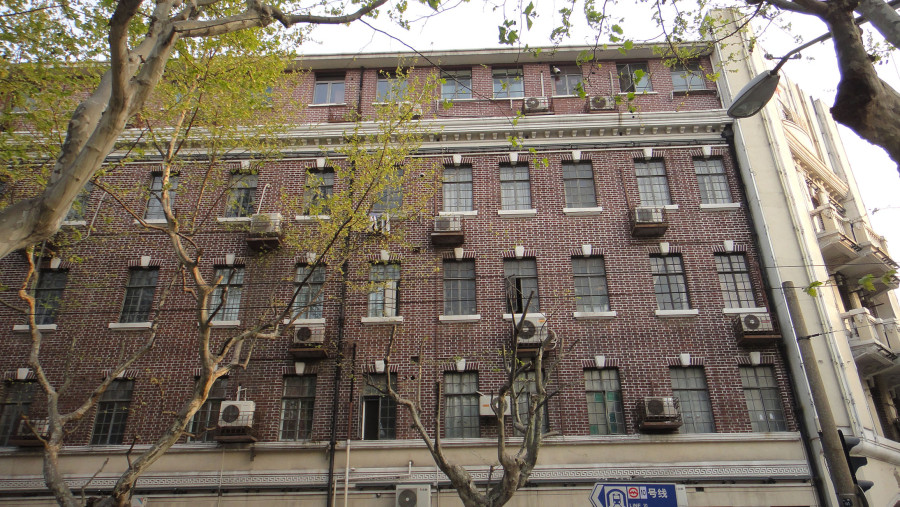 The foyer with the mosaic floor: 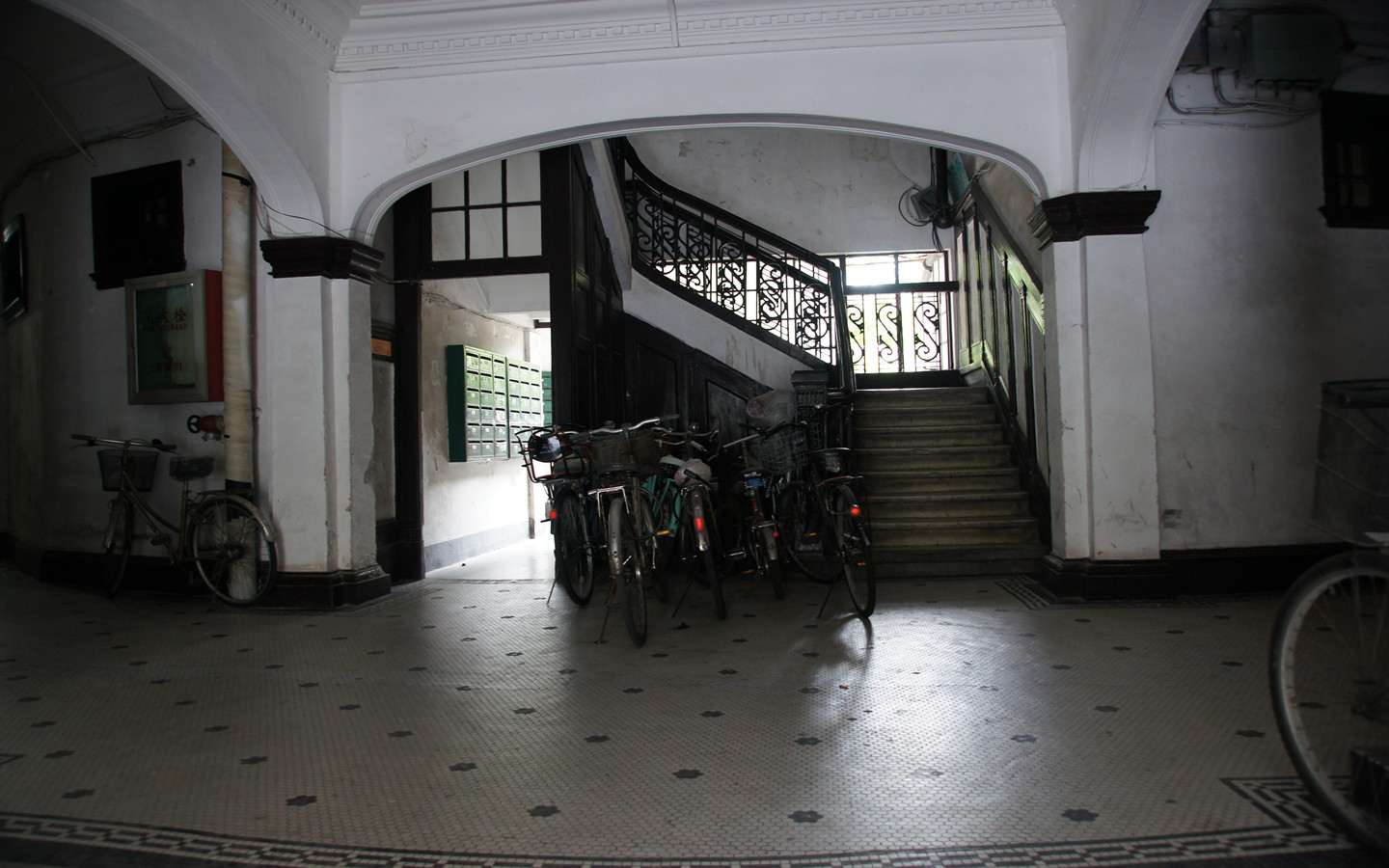 The much-photographed staircases in the Dubail:

A modern pad in the historic Dubail Apartments: 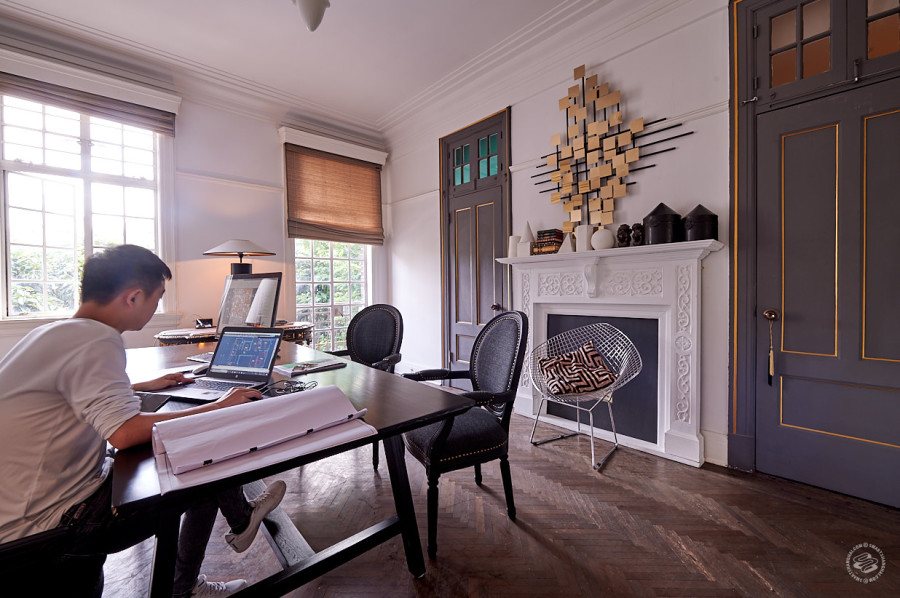 The plaque is not incorrect, if you think of Agnes Smedley's residence as a geographic location and not a specific building: 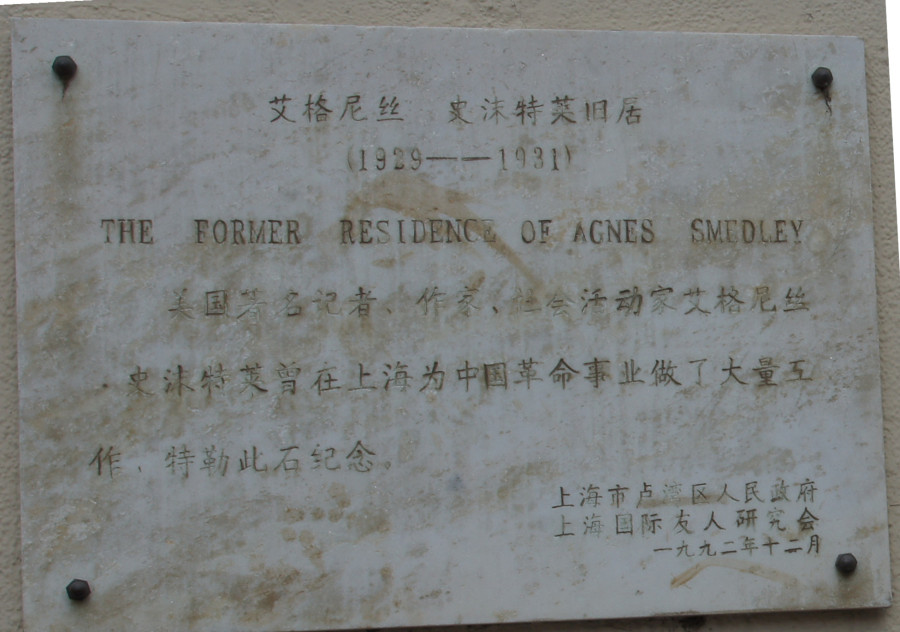 Although Agnes Smedley had nothing to do with Dubail Apartments, pilgrims to her Shanghai haunts have many places to choose from. One can look at the house at 72 Route Grouchy (now 52 Yanqing Road 延庆路52号), where she spent the end of the year 1930, or the I.S.S. (Normandie) Apartments, Apt. 304 (now 1850 Middle Huaihai Road 淮海中路1850号), where she moved in December 1931 and kept her residency for a couple of years, even when she was away from Shanghai. Her last two years in Shanghai, in 1934–1936, were spent at the back building of the Bearn Apartments, at 96 Rue Marcel Tillot (now Xing'an Road 兴安路).

To read more about lesser-known Shanghai architects, check out the NETA (Nobody Ever Talks About) column.