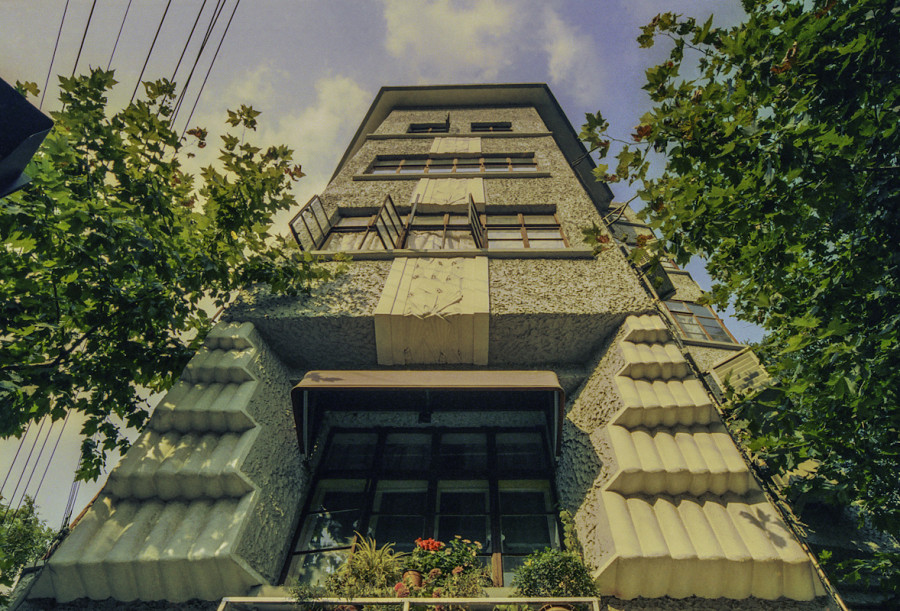 The Midget Apartments is a stunning little building at the northeast corner of the former Route Ferguson and Route Culty (today's Wukang Road and Hunan Road). Its unusual appearance was noticed ever since its construction in 1931: the newspapers called it "Shanghai's most unique" and even a "freak apartment house." In our days, the old French Concession heritage is getting rediscovered, catalogued and appreciated, but this building has thus far remained anonymous. So who designed it? 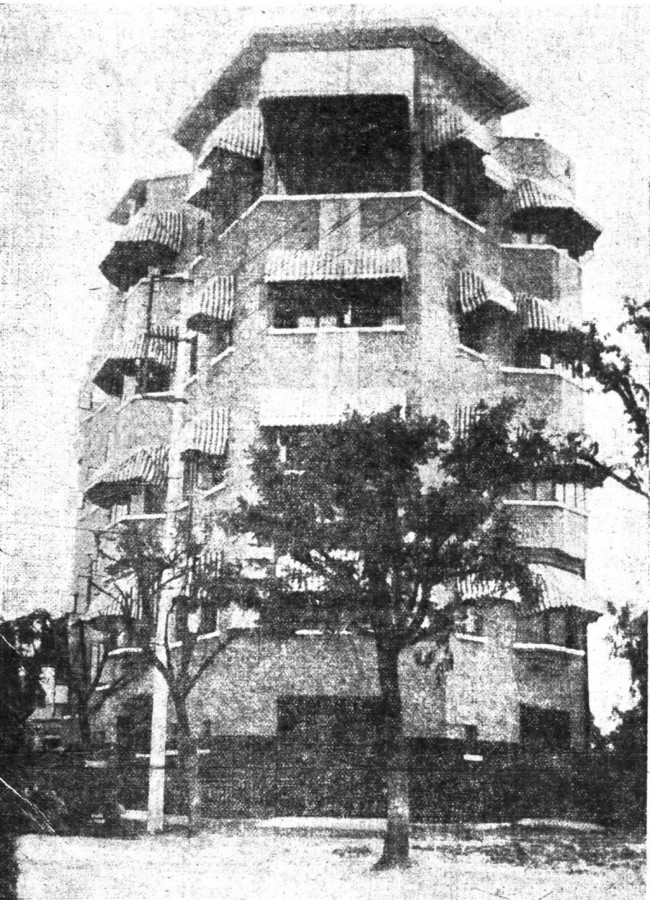 Midget Apartments soon after its completion, in December 1931. 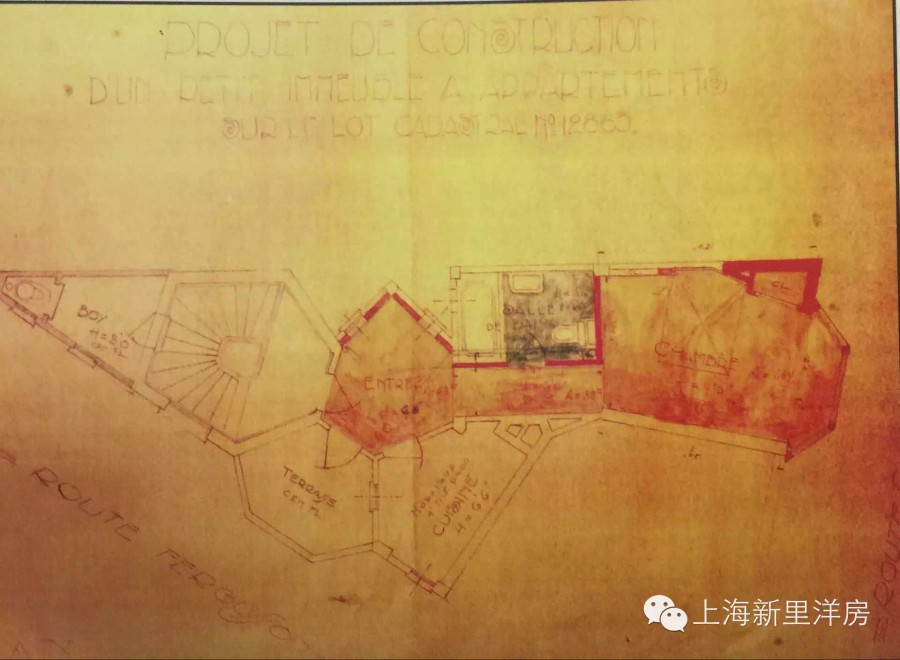 Plan of an apartment.

Marcel Guillet, of the Credit Foncier d'Extreme Orient, created the Midget Apartments. As a rule, this company did not credit individual designers of its buildings, but Guillet was the the firm's chief architect. In the photograph below, taken in 1929, he is seated in the center, in a dark suit. 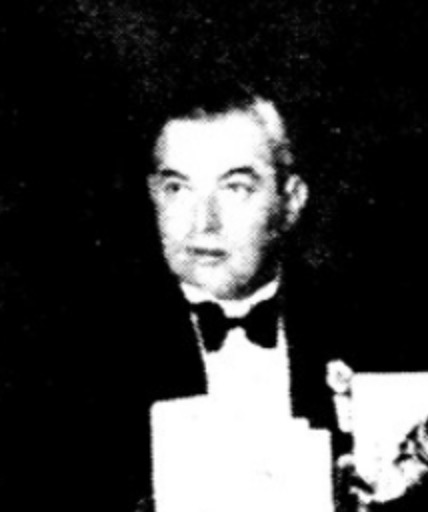 In August 1930, when the Midget Apartments was still under construction, Guillet was named its creator. The "freak apartment building" of "flatiron shape" was five stories in height and located on a piece of land only slightly larger than one mow. "Each floor consists of one entire apartment of two rooms, kitchen, bath, hall, servants quarters. The fifth floor will be an artist's studio. Two gardens occupy the ground floor. The entire cost, including building and land, will be 25,000 taels." Very cheap! 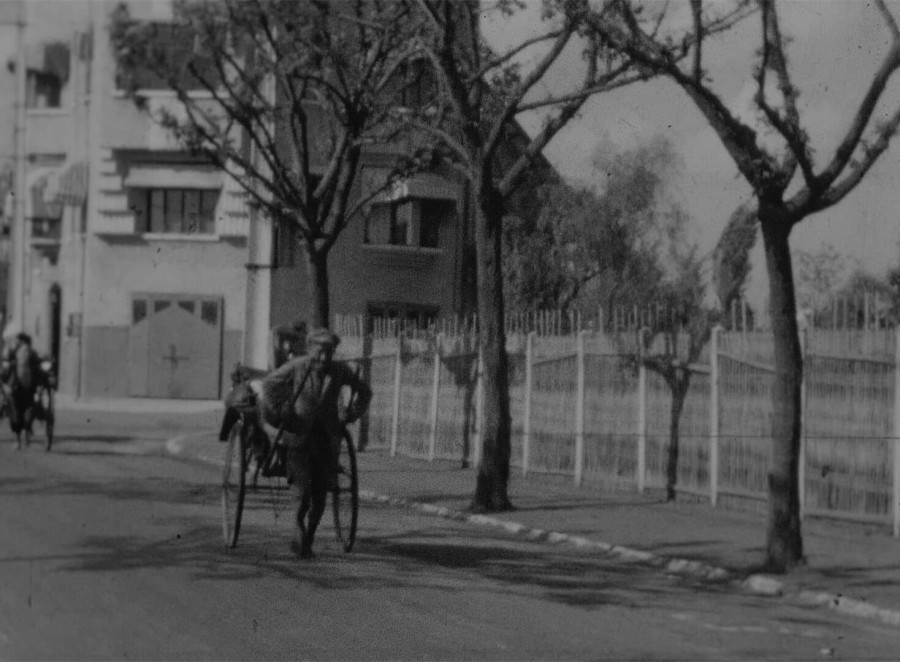 Not much else was built on that intersection yet! Still from the historic footage.

Guillet was also on the team with Leonard and Veysseyre designing the gangster-owned Chung Wai Bank, on Avenue Edward VII, which opened in 1934. Soon after, he left the Credit Foncier, travelled to Marseille with his wife, and not much else was heard from him. 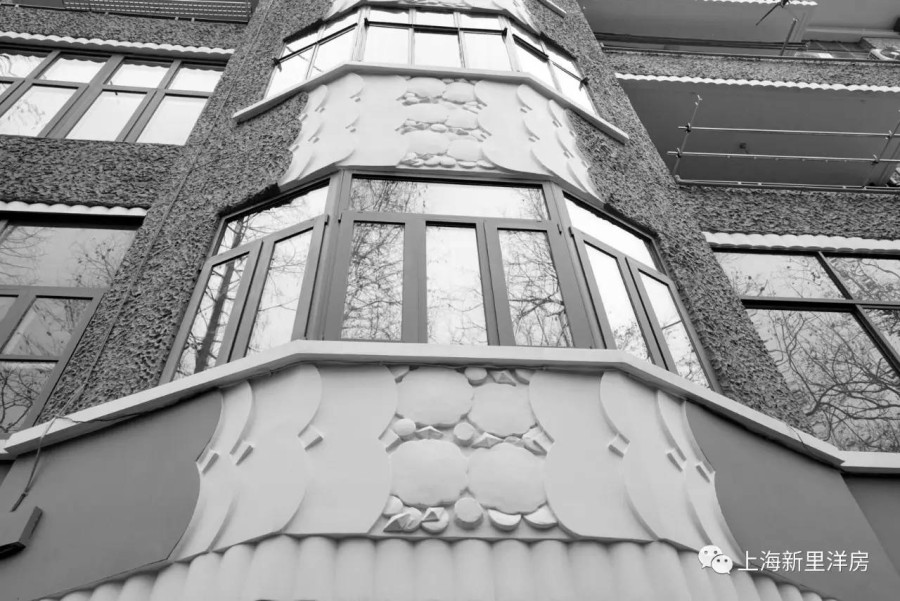 Marcel Guillet was credited for the Petain Apartments 贝当公寓, 700 Hengshan Road衡山路700号, in 1931. "The building is all steel and concrete, of a modernistic pattern. There will be two, three and five-room suites available, Mr. Guillet announces." The architect was proud to mention that the top floor would become Shanghai's first "sky bungalow" (just another way of saying "penthouse"). He also promised ground-floor garages for three automobiles for each family – was that realized, I wonder?

Here is the Petain Apartments, on the right side of Avenue Petain, looking over some gardens (which would later become Xujiahui Park): And here is its historic photo of unspeakably bad quality: 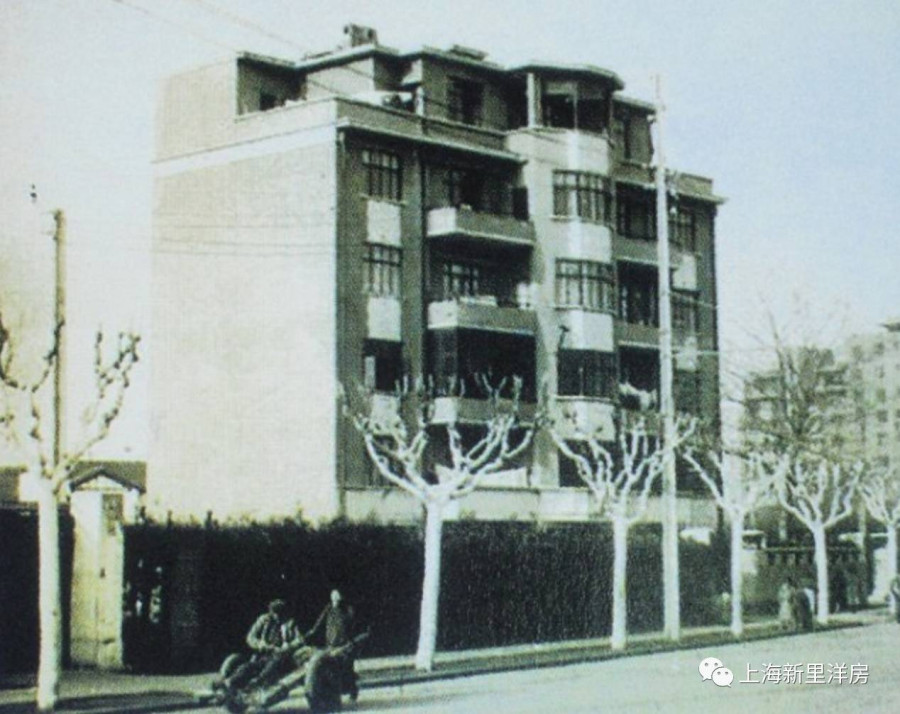 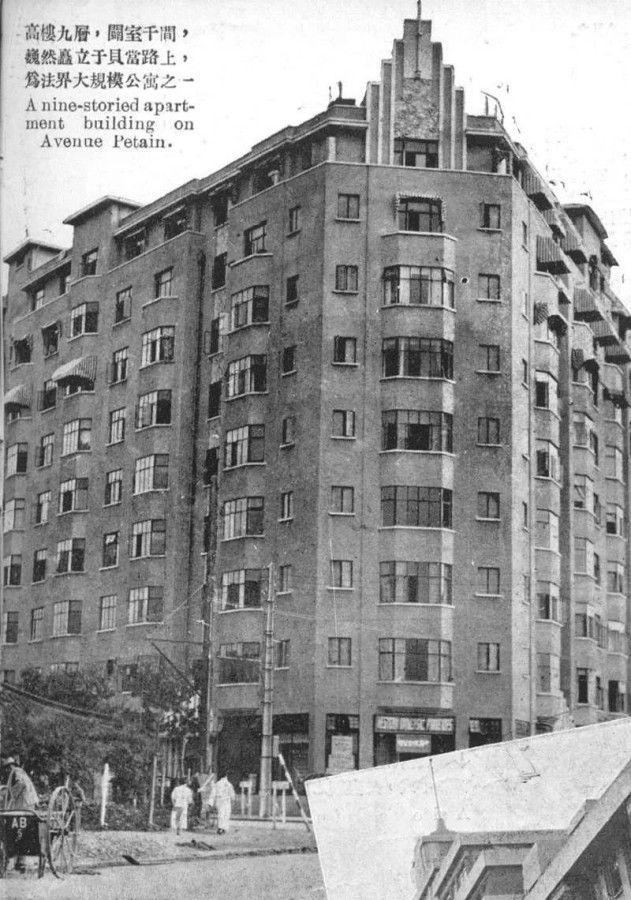 Researchers have already remarked on the similarities between the Petain Apartments and Washington Apartments 华盛顿公寓 (303 Hengshan Road 衡山路303号) and attributed these two buildings to the same architect. The question remained, however – who was the architect? Although I haven't found any explicit attribution, Washington Apartments was also put up by the Credit Foncier, in the year 1932, when Guillet was the chief architect at the company. So this could be his design too.

Another building by the Credit Foncier, not openly attributed to Guillet, but looking quite his style, is the Savoy Apartments 瑞华公寓, on the corner of Route Grouchy and Route de Say Zoong (209 Changshu Road 常熟路209弄). It was completed in May 1930. Here again, are the same balconies with chamfered corners, plaster peel finish, and contrasting bands of floral ornaments. 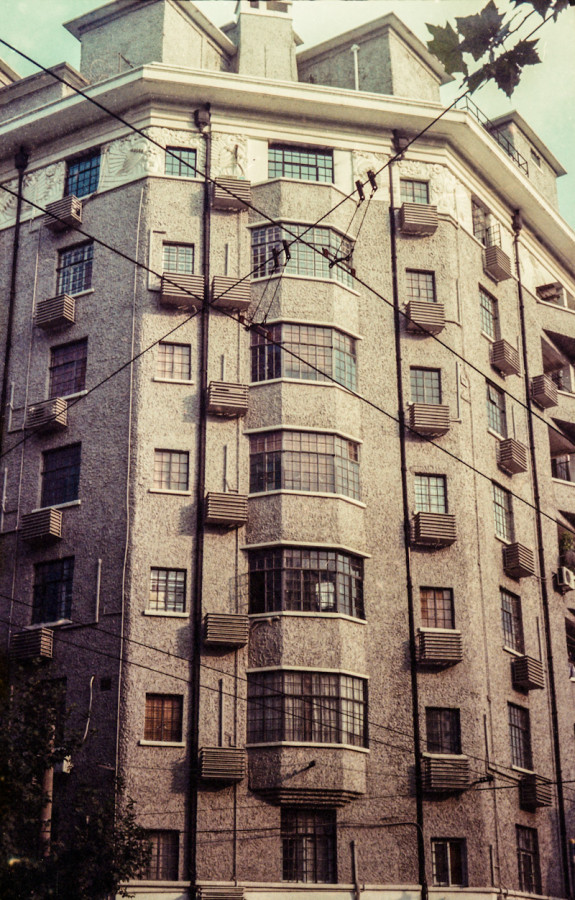 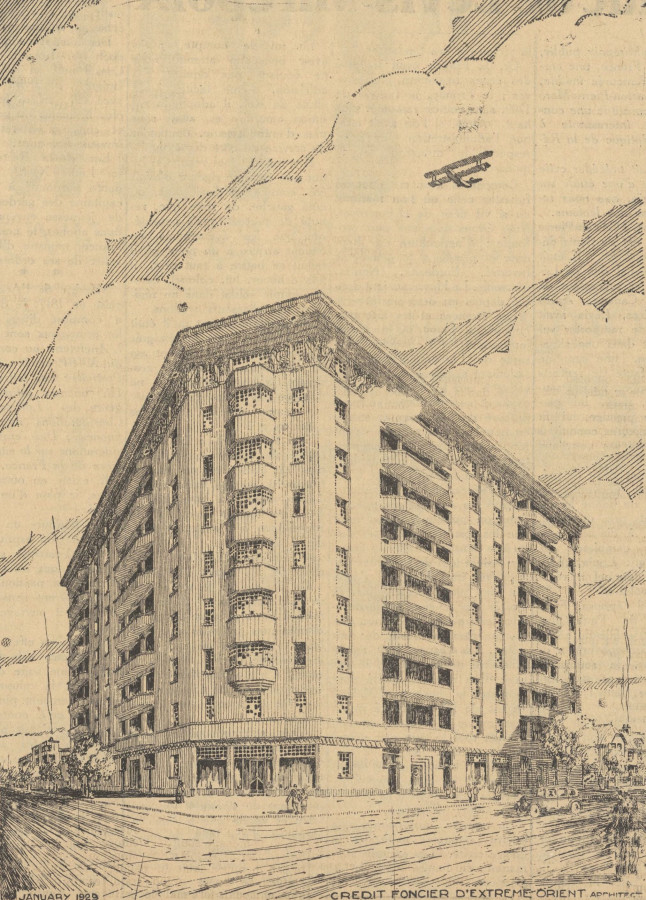 In December 1932, another apartment house was publicized, to be built on Route Ghisi – Cecil Apartments (now No. 3 Lane 195 Yueyang Road 岳阳路195弄3号). Are the characteristic stacked and chamfered balconies and a penthouse enough to ascribe it to Marcel Guillet? Or was it the work of the firm's other architect, for example L. David, who had recently returned to Shanghai from France? 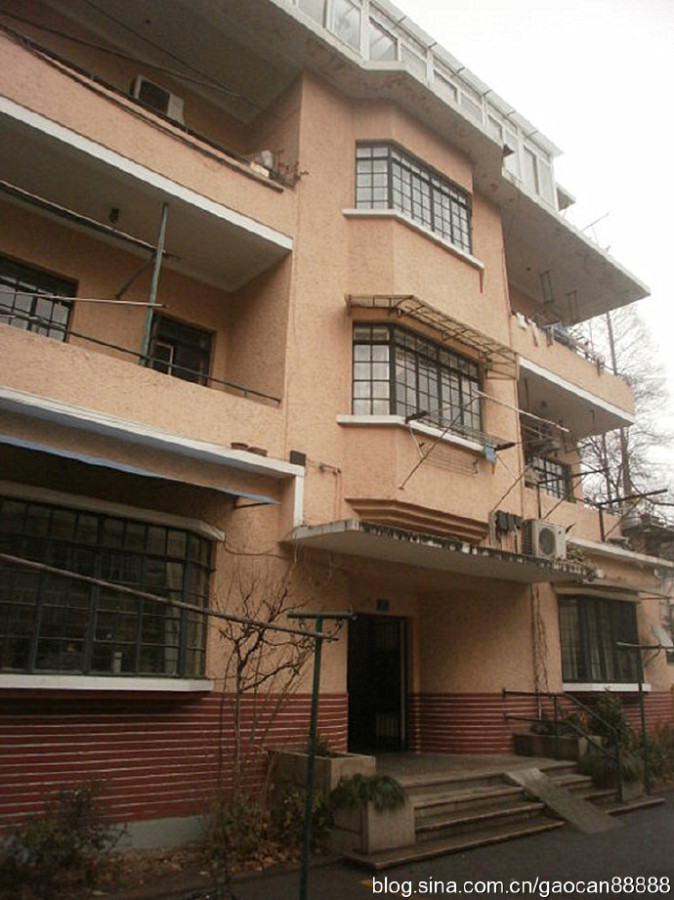 This was another issue in the NETA – Nobody Ever Talks About – column, featuring obscure architects of Shanghai. Previous columns featured Karsten Hermann Suhr, Wladimir Livin-Goldenstaedt, Ilarion Tomashevsky, Hans J. Hajek, Boris Krivoss, Bright Fraser, Gabriel Rabinovich and now Marcel Guillet, who has become a little less obscure, although still quite a mystery.