There are more disjointed woodblock prints in the SOAS vaults, depicting the expulsion of the Small Swords from Shanghai walled city in February 1855. In an earlier post I showed the Qing troops' attack on the walled city, with rebels barricaded inside. Here are two more prints showing the violent resolution of the conflict:

Destruction of the rebels at Shanghai 天浑滅匪
Original description: "The inscription informs the viewer that the redheaded thieves arranged in this scene are really numerous. All of them infatuated with vain hopes they rush southward holding their swords. Their leaders do not know that the imperial army has sent troops to capture the rebels who are hiding there. It is really like pigs and sheep meeting tigers and leopards." Attack on the city gate (上洋 here stands for 上海) sends the red-turbaned insurgents falling down from the city wall. There is determination in the eyes of the Qing, and fear in the widened eyes of the rebels: 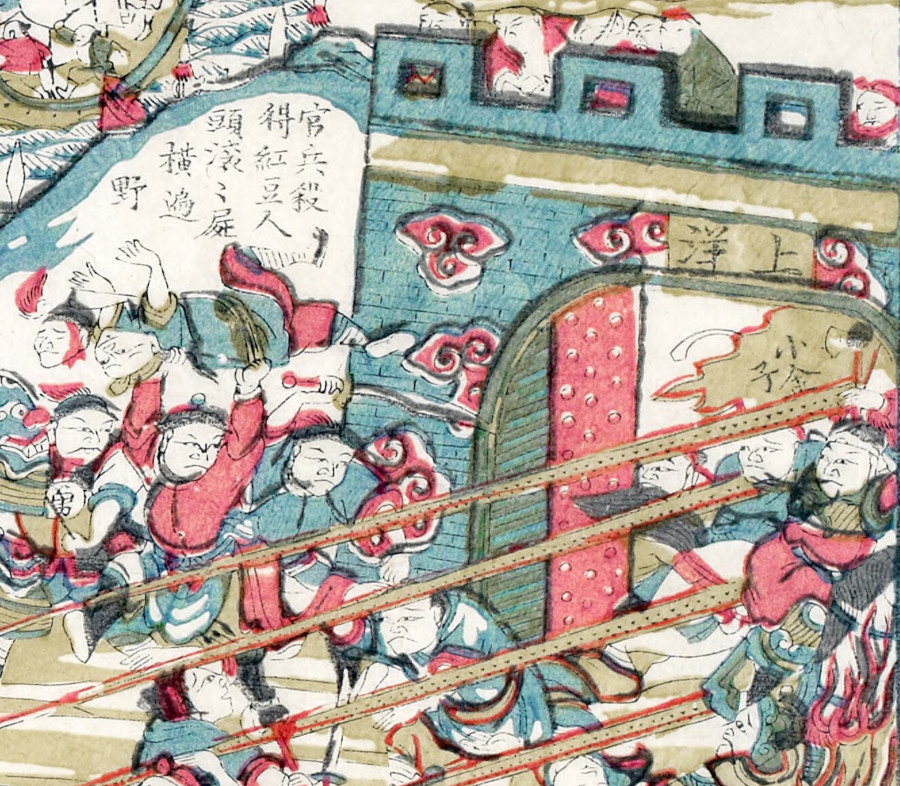 All kinds of provincial troops are present, including the dashing Sichuanese braves wearing tiger pelts. But we won't see any Cantonese or Fokienese, as they were designated the instigators of the uprising. Imperial Court is Victorious 天朝德勝
Description: "This print shows the execution in 1855 of members belonging to the Small Sword Society, which had grown out of the more famous secret societies known as the Society of Heaven (or the Triad) and Earth and the White Lotus Sect. The Small Sword Society mainly operated along the Chinese south-eastern coastline and in the province of Shandong. The inscription informs that the rebel leader Zhou Lichun (1814-1853) from Jiading county, north-west of Shanghai, is being brought away in chains. Out of earnest compassion the people have been allotted land. The troops the officials raised have arrived. While killing off rebels they enter the city to save numerous lives and captured the rebel leader. Moreover the despicable traitors are being killed by removing their entrails, and the secret society members ordered to be beheaded. Their decapitated heads hung up at the city gate." 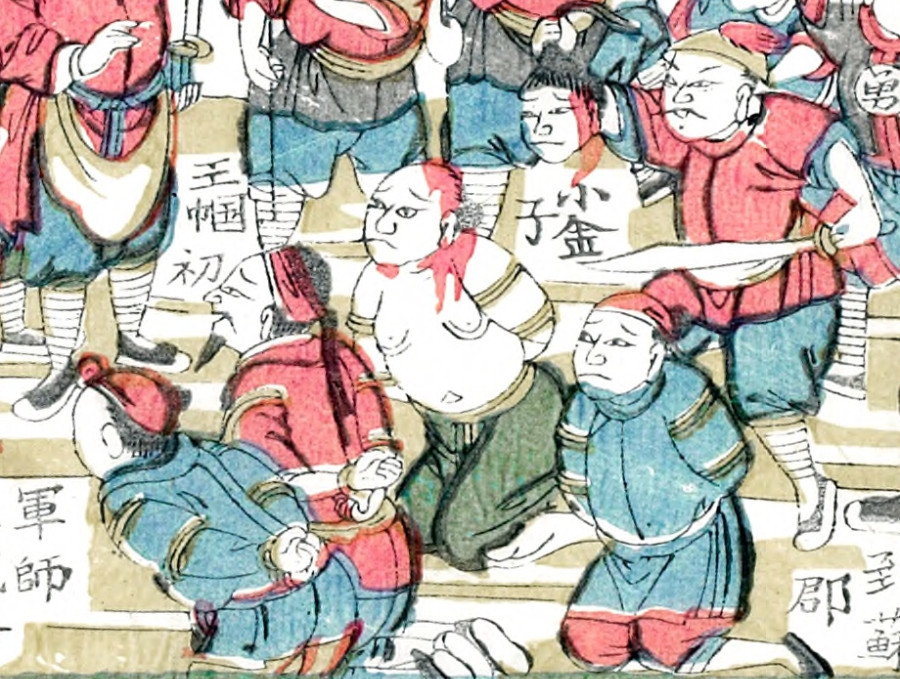 Given that the genre of these prints is Qing propaganda, it is hardly surprising to see some favorable presentation of the facts. The leader of the rebellion Liu Lichuan 刘丽川 is shown kneeling and being disemboweled, captured between Jiading and Taicang while trying to flee. At the time this was not known for a fact (the Qing said he was killed, the foreign missionaris said he fled). The prevailing view nowadays is that Liu Lichuan likely managed to escape into the countryside and was never found. 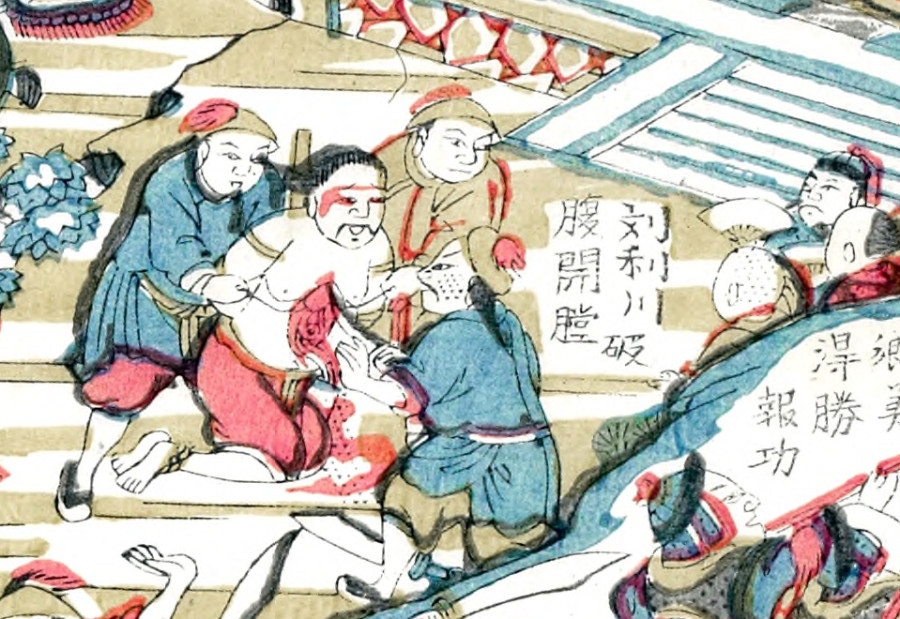 To my knowledge, the best history of the Small Swords' uprising is penned by the Soviet historian V. S. Kuzes (1980). Not only does it skillfully balance Chinese and Western testimony well beyond the famous accounts of John Scarth and M. T. Yates, but also keeps the focus on the bigger picture – the labor crisis in the changing economic environment of the treaty port, which was more instrumental in this invasion than the rebels' manifest solidarity with the Taipings. 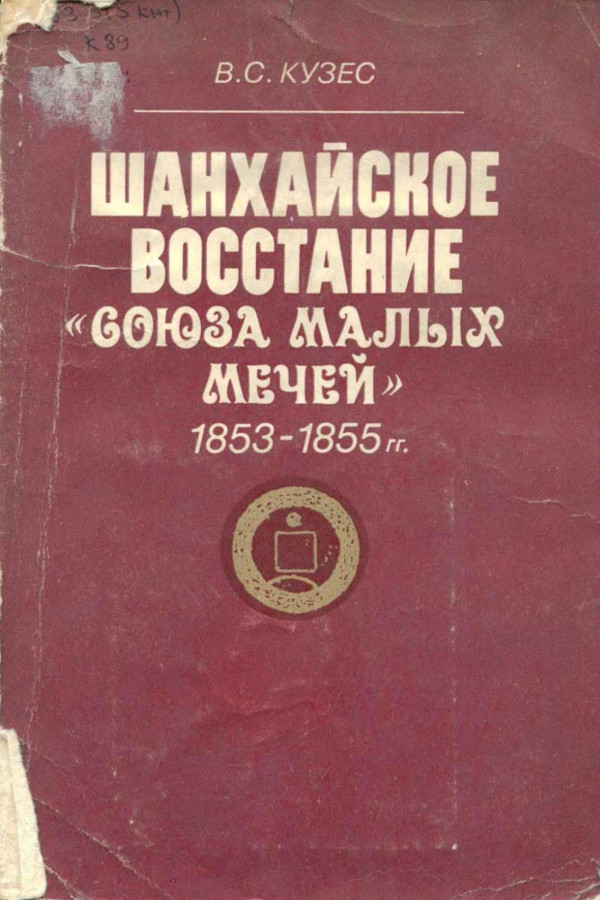