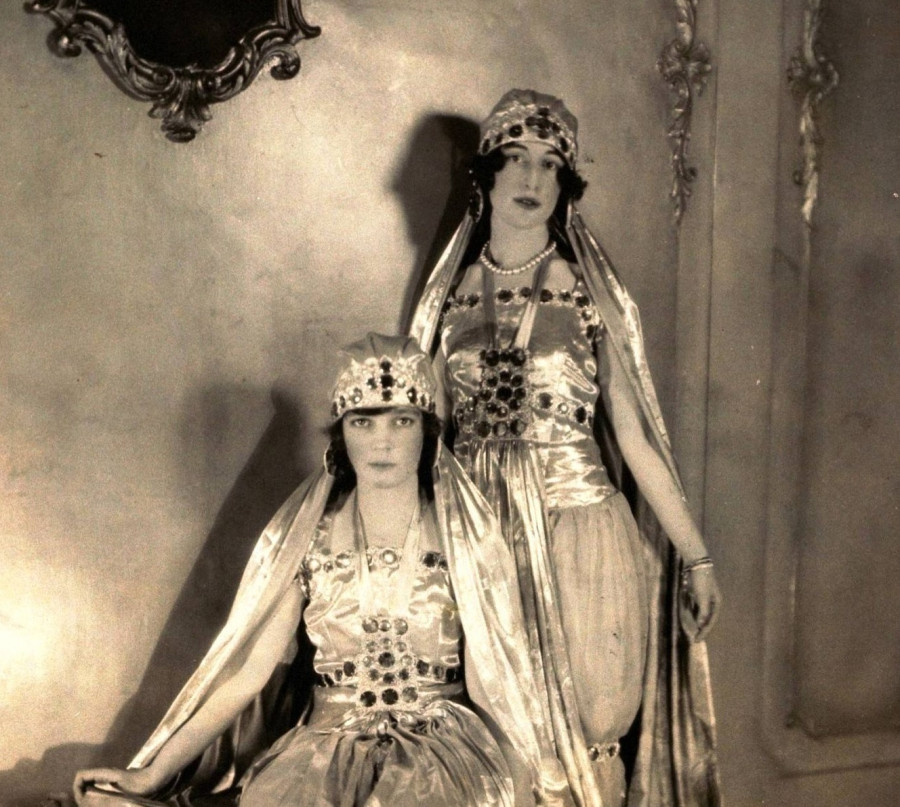 The wanderer turns, bewildered by the sudden sight. Can he be dreaming? What strange apparitions are these which race before his eyes? A bit of the Near East flashing through the Far East? Or has imagination, inspired by so many new and accustomed scenes, wrought havoc with the mind?

More jewels sparkle in the light of the geisha houses in the narrow lane; shrill giggles join the broken rhythm of strangely strummed Oriental instruments; and the flash of color turns and throws to the spectator a peal of jargon in a tongue he has never heard even in Japan.

But he knows it to be Russian, for the faces of his apparitions, which are now apparitions no longer, are surely Russian.

He has heard before of how Russian girls come to Japan as refugees, just as they turn to America to relieve the anguish of recent years in the comparative ease of a more prosperous and happier country.

Three years ago a Russian geisha was found in a city south of Tokyo. But never before had there been known to be any of her sisters in Tokyo. And here, the stranger but two weeks in Japan had stumbled suddenly upon two Russian geisha in his ramblings through the quaint and charming lanes and alleys of Kourasaka, just beyond Ushigome station in Kojimachi.

They were picturesque, these girls, their costumes even grotesque. At home they would be called burlesque. For they were dressed as Queen of Sheba, or more strictly speaking, as Turkish harem girls.

Filmy pantaloons, tied at the ankles, topped with a low-cut piece of exotic shining brocade, formed their attire. On their chestnut hair sprinkled high tiaras from which hung gauzy white silk crepe falling down their backs, a faint screen for their waves of hair.

Russian girls attired in Turkish costume racing down one of the most Japanesey danes on Kourasaka, Tokyo!

"Do you speak English?"
A laugh.
"Parlez-vous français?"
Another.
"Sprechen Sie Deutsch?"

That was all, for with a third peal of laughter th two girls, one tall and one short, turned and slipped into a brightly lit court, where grew dwarf evergreens and shrubbery, and disappeared through the sliding white door.

At least, that was all for one time.

But again, a few days later, the visitor sitting in the Yamada café on the principle street in Kouraka, heard the same gay western laugh and turned to see the two girls enterthe place and take a table against the wall next to his.

They were dressed differently this time, more modestly if you will, but no so attractively. In semi-western garb, high shoes, skirts and coats which came to their knees and served not completely to hide a bright streak of lavender satin.

Again, after a suitable pause: "Do you speak English?" No? Well, then French? Nor that either. But German – they did speak today if not the other night.

"And is it from Russia that you have come?" the wanderer asks in halting German.

"You've been here in Tokyo that long?"

"Oh, no." There was a mysterious silence. But in Japan. Oh yes, we like it here so very much indeed. It is better. Moscow–" the girl scowled. "And before that, Novgorod. So much was left. So much was taken there," she ended vaguely.

"Yes, we are geisha," the taller one informed. "Like other geisha, we sing and dance, entertaining where we live, where you saw us turn in the other night. They like our Russian songs here, especially our Russian dances please their fancy. We shall stay here, you must know, anyways. Come some time, won't you?"

And with that they finished their beer and rose.

That was the last the wanderer saw of the bit of the Turkish atmosphere here personified by Russian geisha girls in the capital city of Japan.