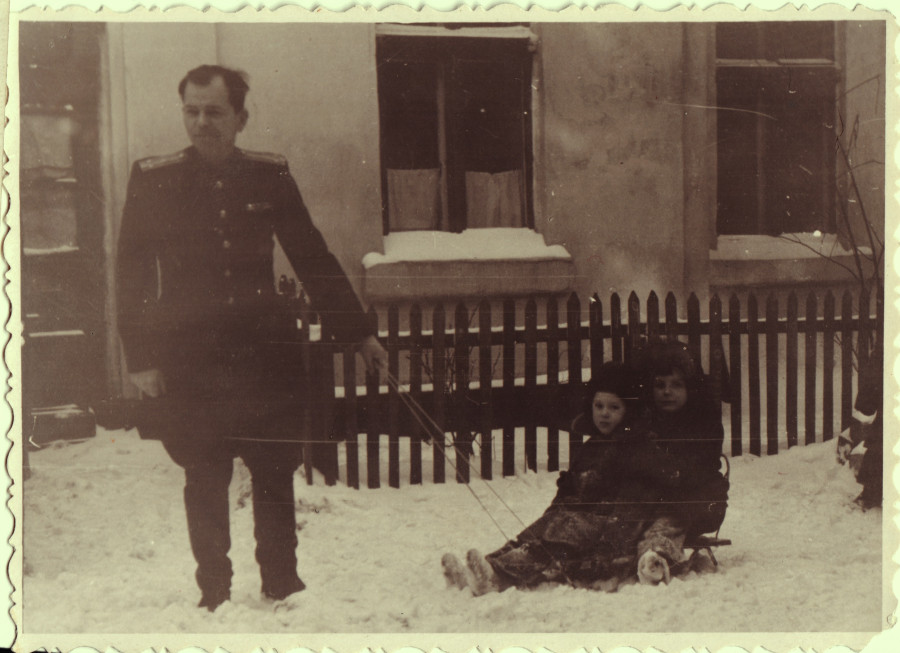 Grandpa always recounted the memories of his childhood with a sense of wonder and amusement. He talked about the smell of the hay in the fields and the freshly baked bread, about the joy of stealing a little lump of sugar from the kitchen... His childhood was a happy and comfortable one – a big village house, with horses and domestic animals, with neighbors' kids running around. His father Aristarch Vasilievich was a military surgeon and a local authority. They spoke Ukrainian in the family.

In 1942, Grandpa was drafted and almost instantly captured. He spent three years in captivity, working at the German turf-production farm. There the Soviet prisoners dug up, cut and stored peat (or turf – a cheap low-effieciency fuel). He did not like to talk about the war or the captivity, like most veterans, but when he did he only talked about the curious and the impressive: how compassionate the German peasants were when they brought food for the Soviet prisoners, how well-dressed and well-equipped the American soldiers were when they liberated the camp; how varied and tasty the American rations were (the latter still sounded quite good in the lean 1990s when I was listening). I brought his account of the captivity and years of forced labor to a German retributions agency in Moscow. The hand-written document on several pages had detailed drawings showing the locations and the precise dimensions of the plant boxes. (After a long deliberation, the agency deemed him ineligible for a compensation.)

The Grandpa was by far the most enlightened person among us, and his humanistic and non-judgmental outlook makes increasingly more sense to me. He was modest, tactful, competent, humorous and generous. He practiced sobriety and moderation without ever making a point of it. He liked the idea of abstract divinity and jokily entertained the idea of extraterrestrial life. He was always surrounded by all kinds and classes of people – colleagues and superiors at work, dudes in his automobile and garage owners' society, dacha neighbors and chess club partners. He was an effortless figure of authority for younger people, many of whom called and checked on him for years. He built his dacha with his own hands, and for decades was the top player in his company's chess society. Grandpa was ambidextrous and could fix any clock and solder any electrical appliance. He taught me the habit of morning gymnastics, helped with my physics and math homework at school and watched me learn to ride a bike and do chin-ups. I wish I had listened to him and followed him more.
Collapse