This article is adapted from the bi-weekly architecture series in Magazeta: https://magazeta.com/arc-broadway/ 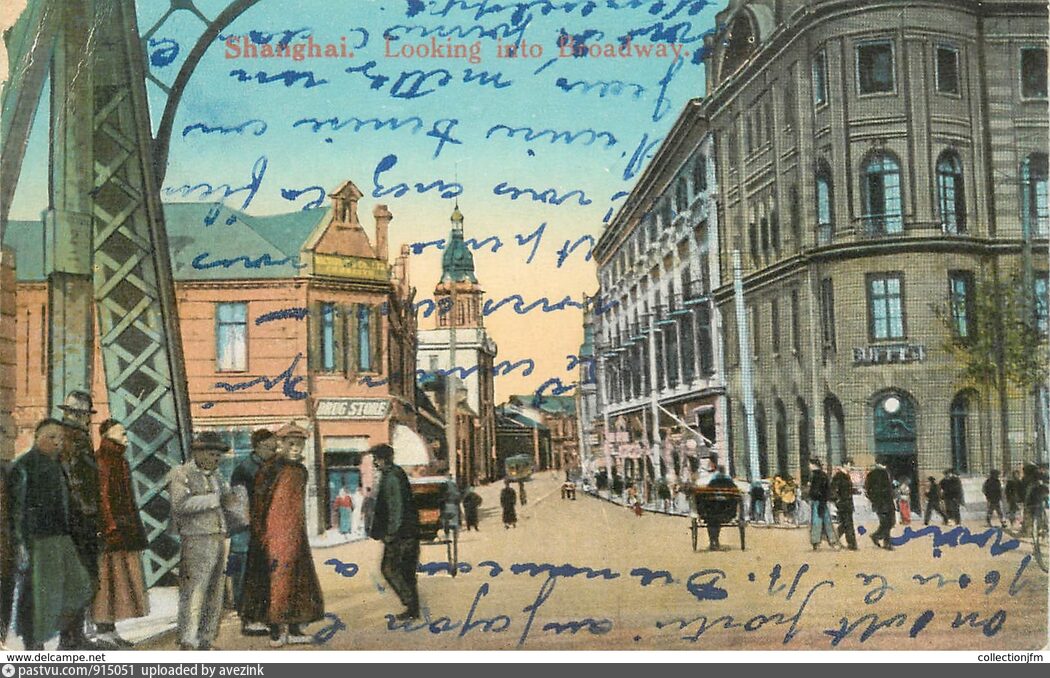 In the olden times, a fishing village at the confluence of the Huangpu and Wusong (now Suzhou Creek) was known as Floodwater, or Hongkou 洪口. Its name lives on, with a slightly changed spelling, as 虹口, or Hongkou, one of Shanghai's districts. When in the mid-nineteenth century foreign diplomats, merchants and missionaries began to settle in Shanghai, this is where the first American Consul, George Seward, established his residence in 1863, chosing the site close enough to the British Consulate. Anticipating the emergence of the American concession, various protestant missions moved their headquarters from the Chinese City to Hongkou. The American Concession never came to be, for the Americans joined the British to form the International Settlement in 1863, but the area north of Suzhou Creek remained associated with the Americans for almost a century.

The main road here was Broadway (百老汇路) – it is now known as Daming Lu 大名路 and Dongdaming Lu 东大名路. Broadway ran from the foot of the Garden Bridge in the northeastern direction, at some distance from the riverbank, until the merger with Yangshupu (formerly Yangtzsepoo) Road 杨树浦路. Initially it was just a "muddy track following the high water line." (Denison 2006) First mentioned in the local press in 1863, for decades it remained a source of complaints because of its frequent flooding, the lack of drainage and its narrowness. The marshy land on both sides was, however, "just right for shooting," and westerners came here to hunt for snipe. They considered Broadway an out-of-town, remote location. When in 1881 a proposal was made to pave the road and lay the tram tracks, some newspaper readers feared this would make the Bund less safe and pleasant, as hordes of the Chinese countryfolk from the Wayside would come to the Model Settlement: "What visions of dirt, garlic, noise and disease suggest themselves with the presence of the Chinese ignobile vulgus!" 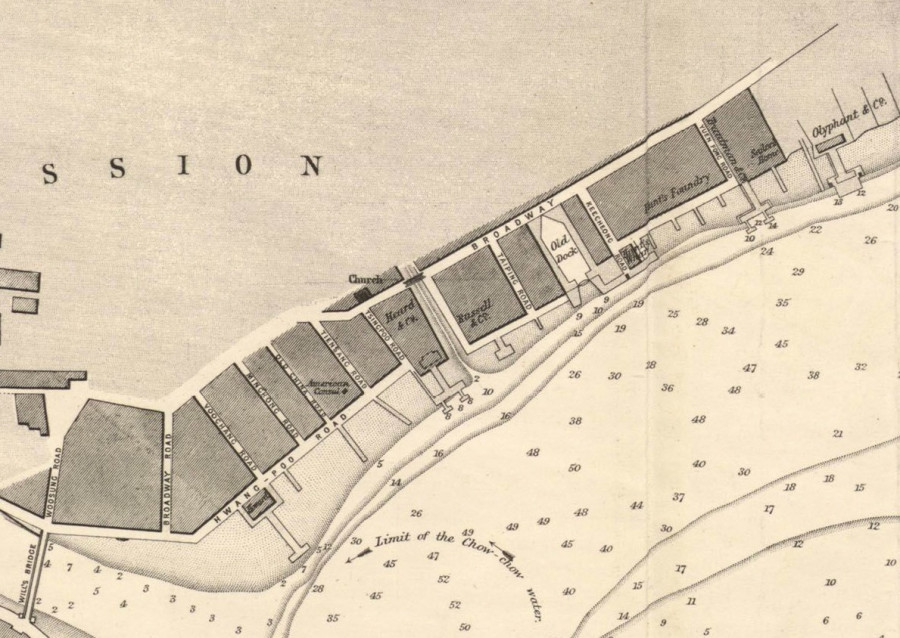 Map of Broadway in 1868 – without the Garden Bridge, irregularly-shaped, but with American Consul's residence, St. Andrew's Church and Sailors' Home 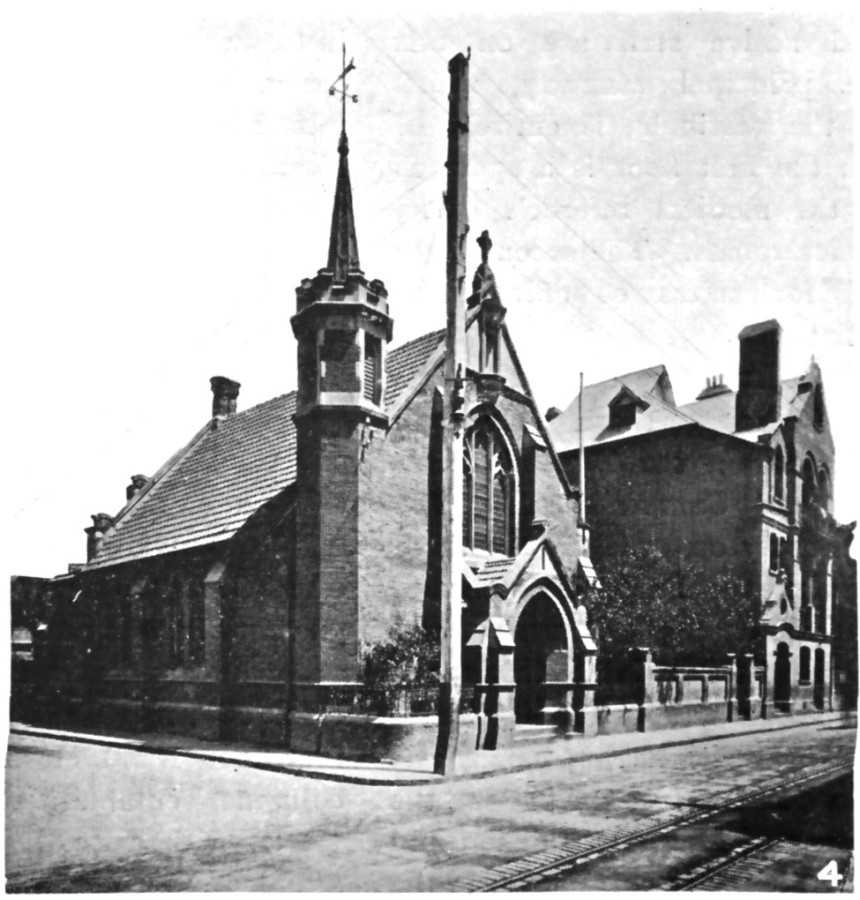 St. Andrew's Church, built by the Mission for Seamen in 1848 on the north side of Broadway 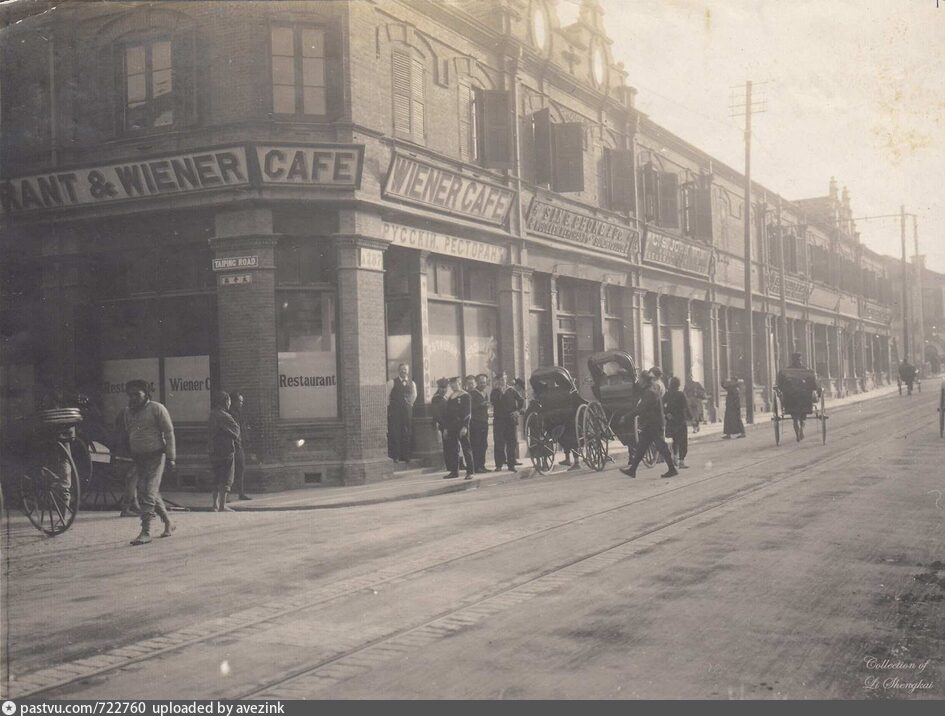 Russian tearoom and restaurant on Broadway, near the port

The growth of the cargo and passenger port (located where the cruiseship terminal is now) made Broadway the main link with downtown Shanghai. It also gave the port neighborhood its unmistakable character – young, masculine and intemperate. Sailors from merchant ships from all the over the world populated the inns and bars on Broadway. Christian missions tried to tempt them with wholesome diversions. There were cheap coffee houses, temperance society meetings, regular boxing matches, and the Warren's Circus, which in the 1890s operated in tents across from the charity-run Sailor's Home. At the circus, the public could watch trained piglets, monkeys and ponies, as well as magicians and trapese acrobats.

But nothing could overpower the thick miasma of the port. Smoke parlors, gambling dens and brothels with indentured teenage girls nested amid the warehouses, stores and currency exchange shops on Broadway. More permanent and reputable than the sea-going folk were the restaurateurs and inn-keepers, mostly Russian Jews from the Pale of Settlement, whose bathhouses, tearooms, restaurants and inns were found on Broadway since the 1880s. Cheap rents made this area attractive for lots of other residents as well, who nonetheless lamented that Broadway was a "disgrace" and "worse than the Chinese City."

Indeed, Broadway was a tough place to live. The straightness of the road tempted the riders to race; in 1885, a certain William Watson smashed his cart into a curb and was fined for reckless riding. At times, traffic was interrupted by a flock of sheep on its way to the port. In the wee hours of the morning, the residents' sleep was disturbed by the yells of the port runners calling the coolies to load and unload the ships. In 1894, a young western woman riding a ricksha was accosted by three drunken sailors; she jumped off the vehicle and ran for three blocks, unable to find a policeman. In 1904–1905, large groups of Russian sailors washed up in Shanghai in the aftermath of the Russo-Japanese War, and their rowdy acts enriched the criminal columns of local papers: "drunk and disorderly conduct," "left the boarding house without paying," "attacked the bartender with a knife," "solicited prostitutes," "begged and called at the houses," "broke a window."

The port development also brought urban improvements. In 1889, houses along Broadway were numbered – very progressive compared to the western suburb of Shanghai (Bubbling Well Road), where this was still the residents' dream. In 1904, the first public sewer in Shanghai was installed along Broadway, and when the flooding was tackled, the tramway tracks were laid out. In 1923, with the arrival of the defeated White Army fleet, the Russian officers and sailors were absorbed into the economy of Brodway. The local entrepreneur Charles Eddie (许延佐) sheltered and employed the Russians in his Eddie Cafe, and the Russians, in turn, enriched its menu with some Slav dishes. After several years, they paid for their lodgings with one of their ships, called Okhotsk, and Eddie added it to his company's cargo fleet. 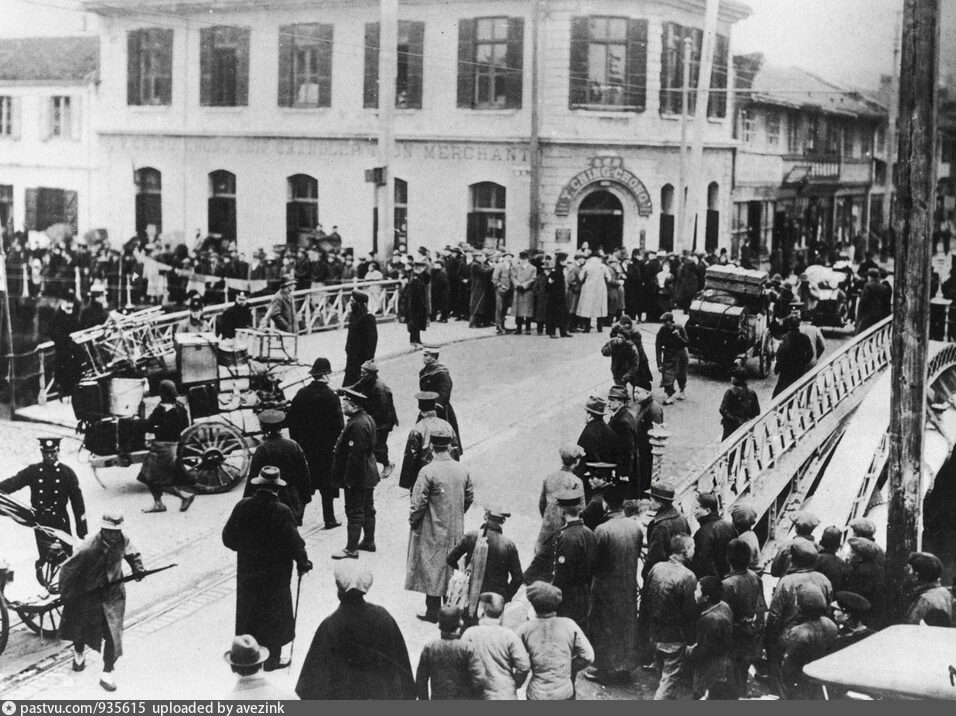 Broadway in its central part, near Hongkou Creek, in 1919 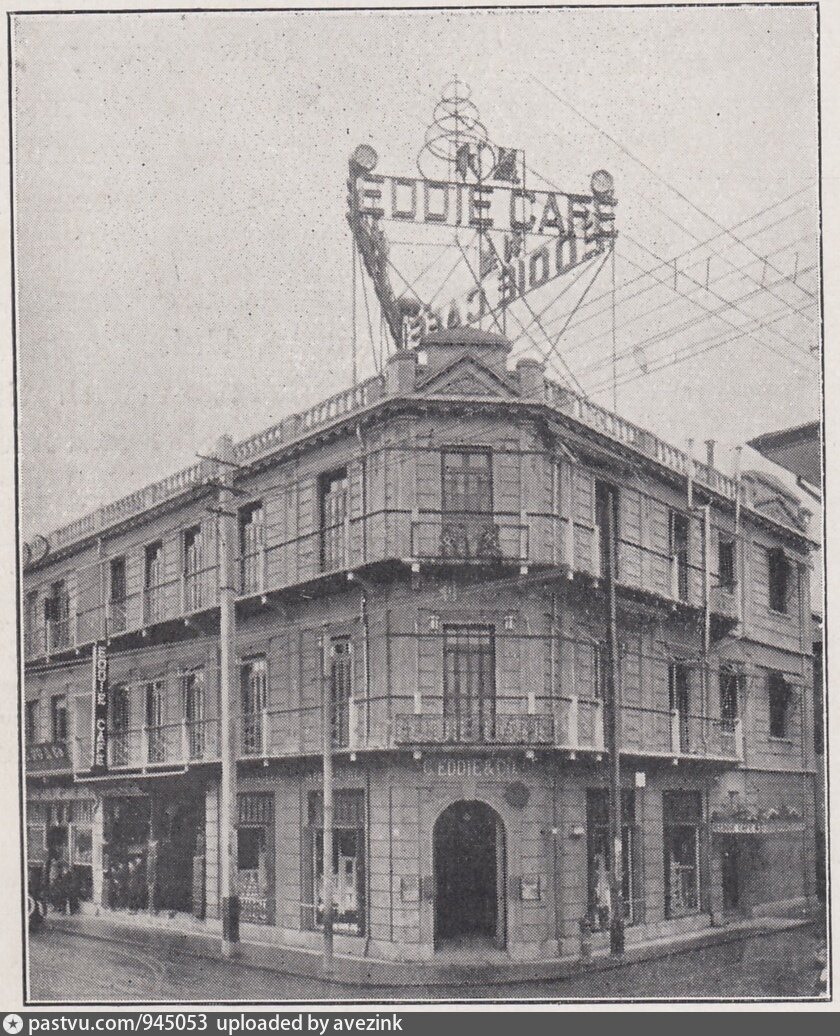 Eddie Cafe in 1923, at the corner of today's Minhang Road

Astoria Confectionery, opposite the Astor House, in the 1930s Broadway near its Garden Bridge terminus

As one moved along Broadway away from the port toward the Settlement, the street profile became more refined and distinguished, as more fashion stores, pharmacies and cafes cropped up on both sides. In 1900, the "wretched wooden tenements" across the street from the Astor House hotel were rebuilt into a shopping arcade, and in 1919 Winnikoff's Russian bakery opened here. Several years later, the Greek entrepreneur Kyriaco Dimitriades took over this enterprise and turned it into the Astoria Tearoom and Confectionary, famous for its outstanding deserts.

During the Japanese occupation (1937–1945), Broadway slumbered together with the port, but in 1945 the American dollars brought the revival: once again, "every second door led either led to a bar, a brothel, or both." On Broadway, "drunken sailors would reel out into the streets, fight with fists and knives, beat up coolies and pedicab drivers, go off with the girls," and the girls – Korean, Russian and Chinese hostesses – happily stashed away their dollar earnings. The Communist takeover in 1949 signaled the end of old Broadway, "with all its violence, its poverty and its reckless disregard for human lives." (Archer 1953) An American journalist revisiting Broadway in 1953 found it properly sanitized, with new clinics and libraries, neatly dressed children playing in the school yards, etc.

None of the port atmosphere and very little of its original built environment survives to this day. The Astor House and the Broadway Mansions (1934) are protected, but the Eddie Cafe and the Astoria block were erased not so long ago, to the bitter disappoinment of Eddie's and Dimitriades' descendants. Aside from several stretches of old storefronts and lane houses scheduled for demolition, other witnesses to Broadway's history include Shanghai Dock and Engineering Co. 耶松船厂 from 1908, at 378 Dongdaming Road, the D. G. M. Aronovsky's godown at No. 687 (designed by the Russian architect A. J. Yaron), and the Nanyang Bros. Tobacco Co. 南洋兄弟烟草公司, at No. 817.

Refugees on Broadway, running to escape Hongkou, attacked by the Japanese in 1937 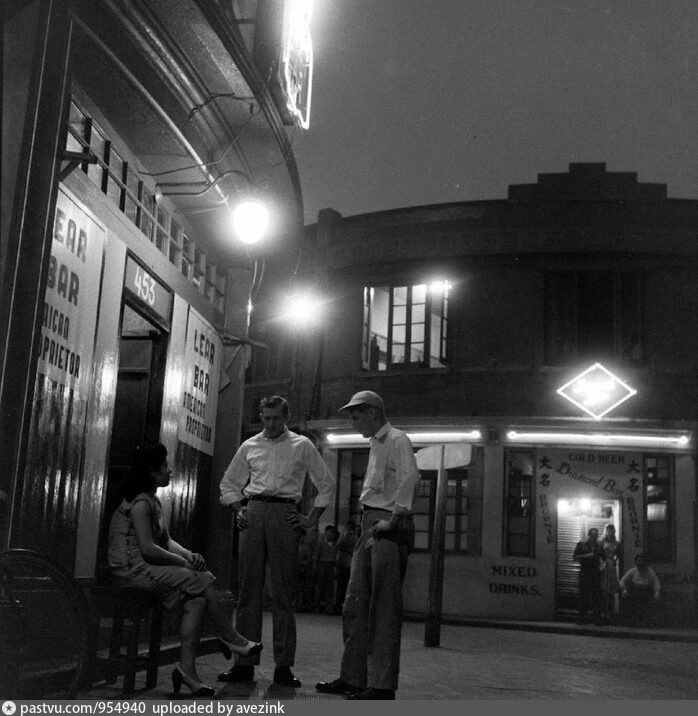 Nightlife on the west (top photo) and east ends of Broadway, in 1949

The original article in Russian: https://magazeta.com/arc-broadway/