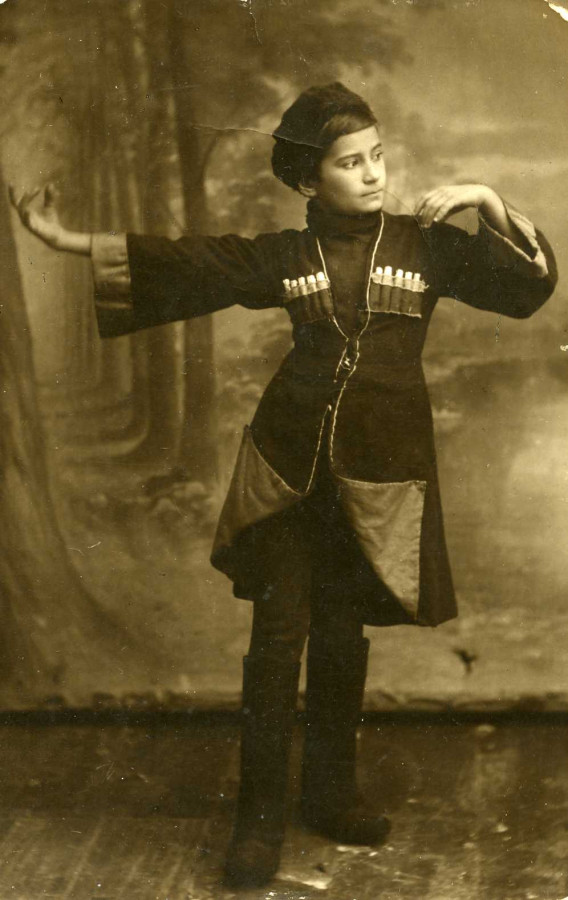 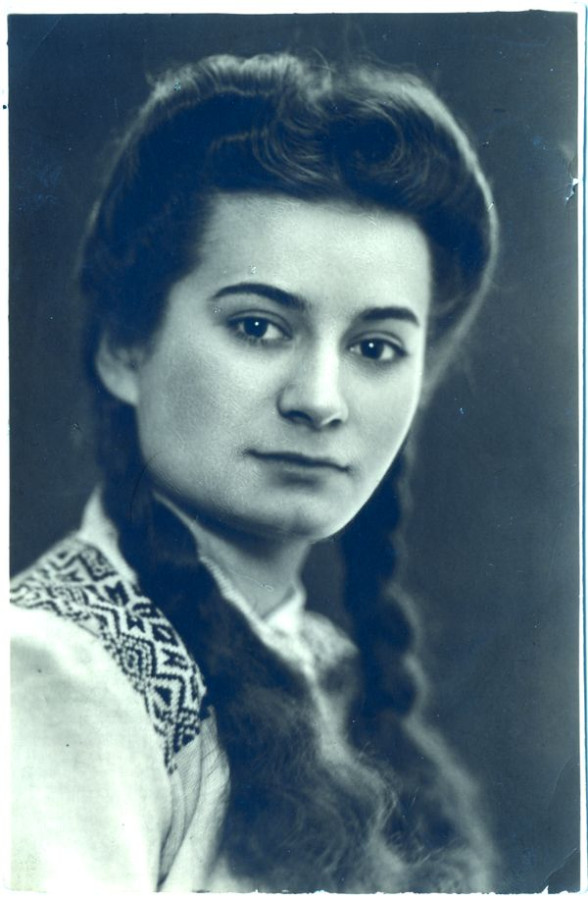 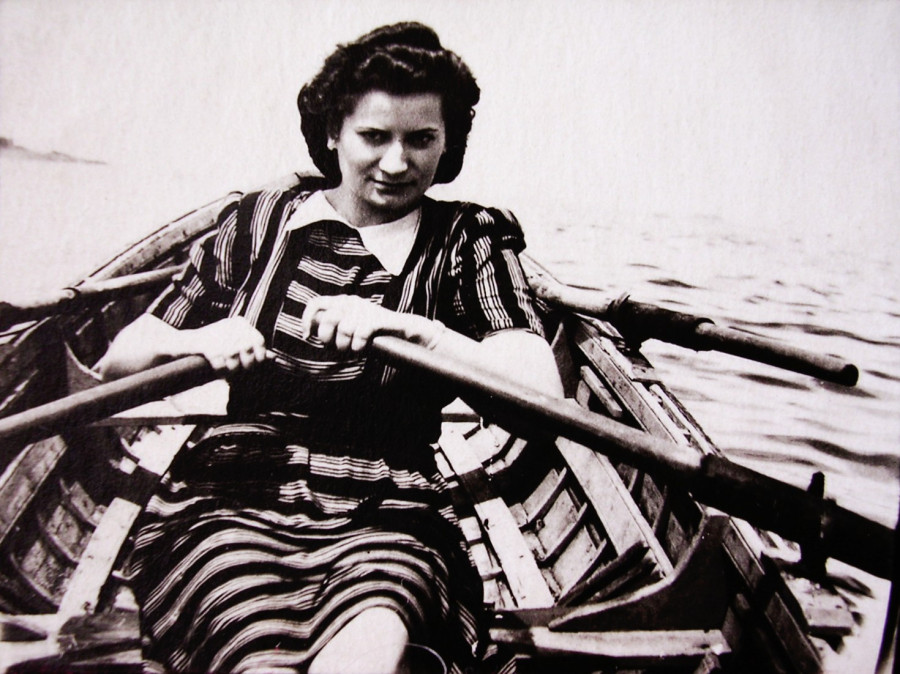 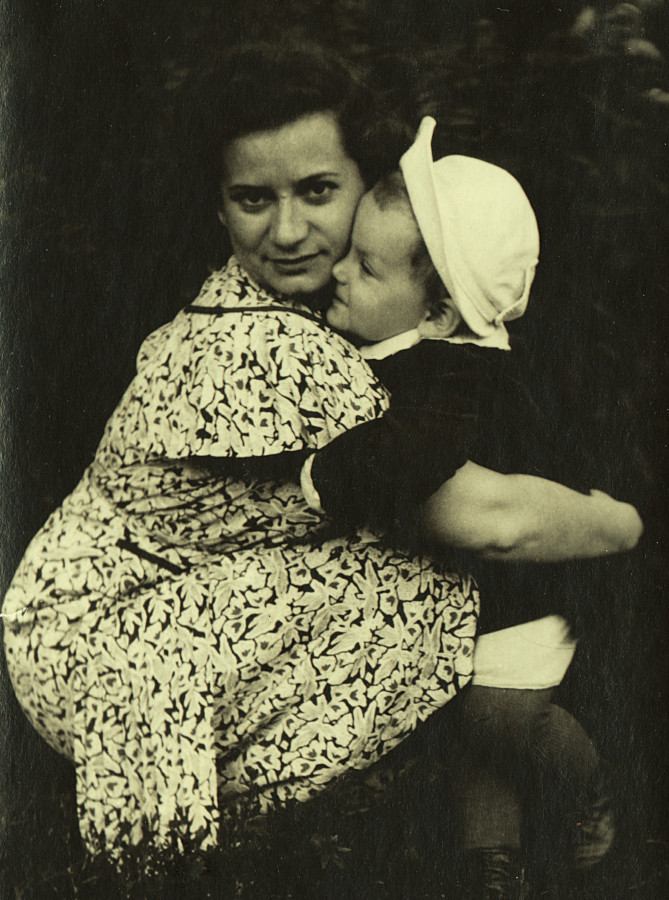 Nina was born in Tiraspol, today's Moldova, in 1925. A few years earlier, in the aftermath of the Russian Revolution, the local river Dniestr became the state border between the USSR and Romania; Nina's grandfather, from Polish nobility, chose to stay on the Soviet side. The river was heavily guarded, and local children, including Nina, were not allowed to swim in it, even on hot days. Nina, her brother Kolya and their mom Maria lived in two big rented rooms of an old wooden house; they had a maid, a young peasant girl, who did chores for food and board.

Nina was lean and sporty; she took dance lessons, which gave her characteristic muscular calves for the rest of her life. Her best friend was Frida, from a Jewish family. Theirs was a multi-ethnic and multi-confessional neighborhood without anyone giving it much thought. Nina could chat in Romanian and knew some Ukranian. At school, she took French; English was not widely taught yet.

During the war (1941–1945), Nina was a teenager. Her older brother, always referred to as "little brother Kolya" (братик Коля), was 19 when he was drafted and killed almost immediately. Like everyone at that time, Nina experienced wartime hunger. People were cooking their shoe insoles, to get some calories from leather. After the war, the schools reopened and Nina could finally graduate. Then she traveled to Odessa to apply to the medical college, according to her mother's instruction: "Learn to be a doctor so you can treat me." On her way to the admissions office, Nina ran into a childhood friend who was about to apply to the technical university, so Nina tagged along... and applied. Her mother was quite unhappy!

While attending the university in Odessa, Nina lived with her aunt Xenia. The aunt's daughter Lora was Nina's cousin and close friend, but when Nina recalled those years she always mentioned that the aunt only fed her daughter. Nina had to survive on her monthly stipend (which in the Soviet Union was never enough to live on), so she ate once a day in the student canteen. Recalling those meals she laughed bitterly: "Carrot cutlets! One thin sausage!" Now it is known that malnutrition in the formative years can shorten one's life, but Nina lived to the age of 94.

At the university, Nina studied radio relay systems, a novel technology in the late 1940s, not yet widely implemented. There she met her husband, my grandpa Eugeny (Zhenya), who had returned from the war and had to make up for the lost high school years. They ended up in the same class, even though he was two years older. She loved to taunt him by recalling the time when he took her to the Odessa opera theatre, a beautiful building. Nina wore her best (her other) dress, and when Zhenya saw the large decorative stitches on her pockets he naively exclaimed: "Just like a shoe-thread!" ("Как будто дратвой прошито!") Nina was insulted and quoted this remark at every family feast for more than half a century. Other than the first date, the courting was successful; they attended classes together and then got married.

After their graduation, they were offered a choice of provincial locations to spend the mandatory three-year work period as "young specialists." Zhenya had to keep a low profile to avoid persecution for his three years of German captivity during the war. His father, a renowned military surgeon, pulled some strings, and arrange to have them sent to Novosibirsk, the furthest place from the center. There they lived for the rest of their lives, returning to his and her relatives in Odessa only once every few years. Eventually they stopped going back, and brought Nina's mother Maria to live with them in Siberia.

In Novosibirsk, Nina's education and skill set were in high demand. She joined the civil aviation and had a long career supervising the installation of radio relay systems throughout the region and teaching the employees. Her job took her on frequent trips all over Siberia. At the group portraits from the 1960s and 1970s, she is often the only woman surrounded by dozens of male colleagues in uniforms. She enjoyed the authority and respect her position gave her; she had a uniform and shoulder patches to wear on special occasions. For decades after her retirement, on her birthday her phone was ringing all day long, with her colleagues, friends and students calling to wish her a happy birthday and chat about the old times.

For many years, she served a civil court duty, although the pettiness and triviality of the cases made her disdainful. She had little patience for uneducated people and derided those with plain manners or substandard pronunciation, always considering herself "technical intelligentsia." She made every effort to assemble a decent library at her house, recycling paper to exchange for book vouchers, or swapping with other collectors.

Always preferring straight and open channels, Nina rarely participated in informal exchanges and micro-corruption schemes that penetrated the Soviet existence. She did not, however, refuse the opportunity to beautify her home and lend it some bourgeois sheen. When she went to a seminar in Latvia, a relatively well-to-do Soviet republic, she purchased a set of bulky bedroom furniture and arranged to have it delivered by the same train she was traveling; all payments and bribes were in bottles of vodka. From her Uzbekistan trip she brough a thick bukhara carpet. In the absence of consumer goods or any legitimate shipping channels, each of these acquisitions was a feat of ingenuity.

As an exemplary socialist worker, Nina earned a tourist trip to East Germany in the 1970s, and got to see Dresden, Bonn and other cities. The small group of Soviet women had to be accompanied by a Communist Party minder anywhere they went. But Grandma's main irritation was that others did not bring the travel necessities with them and kept asking to use her nail-clippers ("Дайте ваших ноженок"). Her opinion of Europe, based on that trip, remained unchanged through the years: "I know what it's like; I've been there."

When she reached retirement, Nina threw herself into house-keeping. For all holidays she made complicated feasts with mayoinnaise-laden finely diced starter "salads" that made our sides hurt, but we still managed to make room for the pie, because it was delicious. She took pride in her deep-dish pizzas – with an exceptionally fluffy dough and multiple toppings – just like my grandfather liked. For my birthdays, Grandma baked her signature layered cake with magenta frosting, tinted with squeezed beet (the Soviet know-how). My name and the number of years would be spelled with sliced chocolate candy and walnuts. Every family gathering called for stories from grandma's and grandpa's youth, which we listened to over and over. Nina had very precise memory for names, relationships and positions of people – as well as their exact words – which nicely complemented grandpa's memory for ambiences, smells and emotions.

My mom worked long hours, so grandma Nina (Babunya or Bunya, as we called her) was my principal caregiver, seeing me through the kindergarten and school, cooking for me, tying my braids and teaching me my first English. During my kindergarten years, she almost lost her eyesight to cataracts, but she continued to sew beautiful and detailed stuffed toys that I brought to my class. Her last creation – the little beige monkey – was so unevenly stitched that my eyes filled with tears. Fortunately, Nina's cataracts were removed, and she became the sharpest-seeing member of the family, rarely needing glasses.

Her management of the dacha (summer house and vegetable garden) was a veritable tour-de-force. Siberian soil – cold, shaded and slug-ridden – is very hard to cultivate, so grandma Nina spent hours every day kneeling over the patches and achieving harvests of such exotic fruit as strawberries, tomatoes and even eggplants. Once she trusted me to weed a flowerbed, and I got rid of the good plants together with the weeds, confirming her long-time conviction that you can never delegate anything. I was often exasperated with her ways, but she was always forgiving, patient, humble and generous.