Obscure old houses that no longer stand on Shanghai streets... With the buildings gone, it seems nothing can trigger the memory of their heydays – but maps, photos and newspapers can still tell their stories. 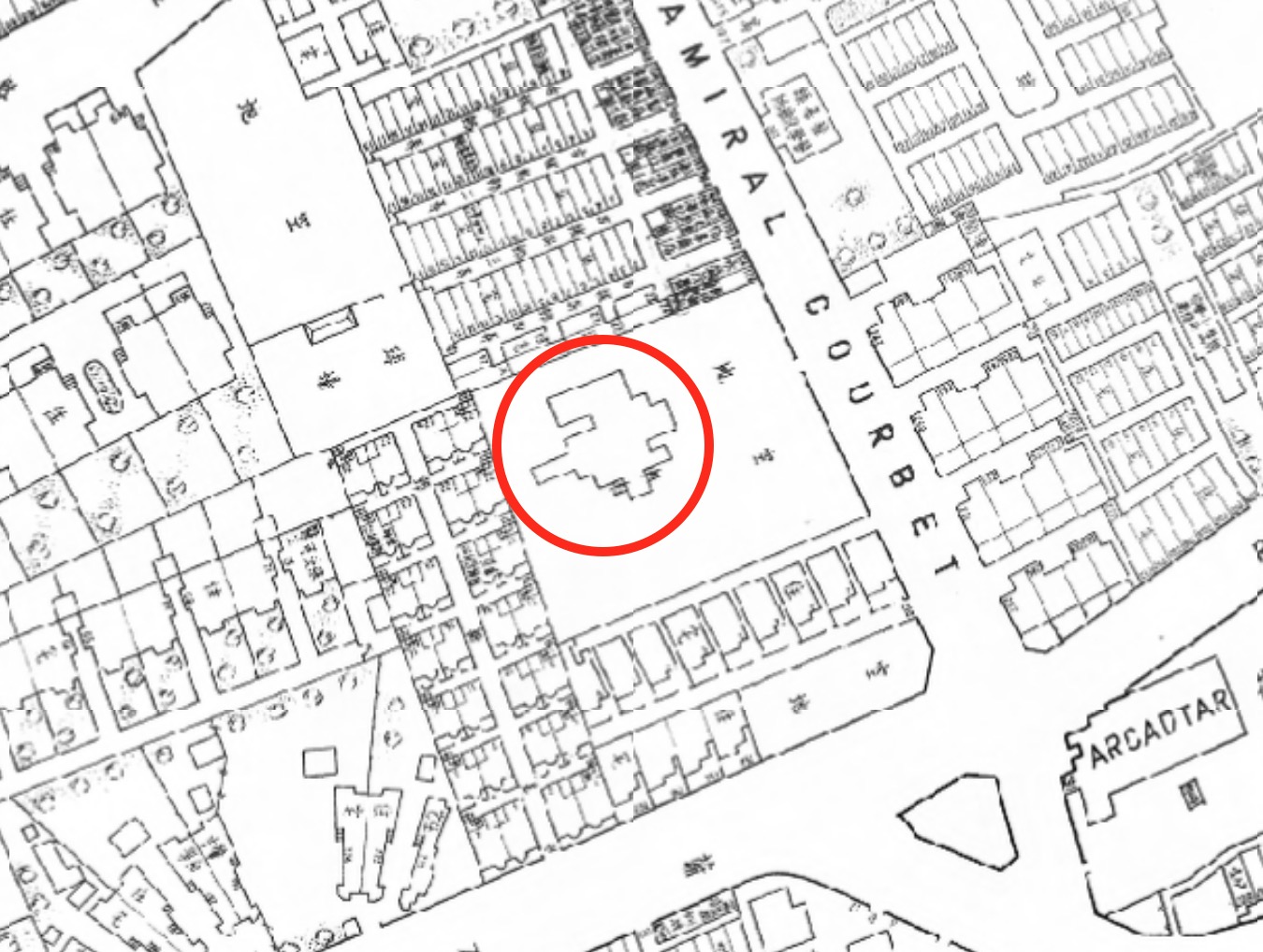 The original destination of this mansion, built in 1907, was the residence of the Dabeltstein family, called Kenlion, which I cover in this later entry.

The out-of-town activity center for Shanghai Americans – the Columbia Country Club – formed in April 1917 in the rented garden house at 50 Route Doumer (later the northern part of this street was renamed Route Courbet). By 1920, the membership was soaring and the old premises seemed too small to accommodate everyone. In 1923, the club acquired land on Great Western Road and commissioned the architect Elliott Hazzard to design the new premises. By 1925 the Columbia Country Club vacated the mansion. 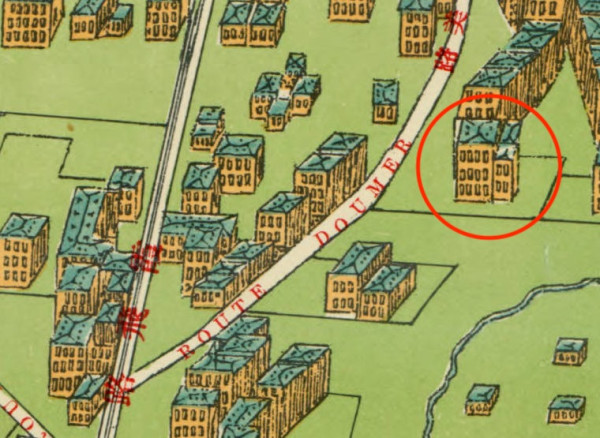 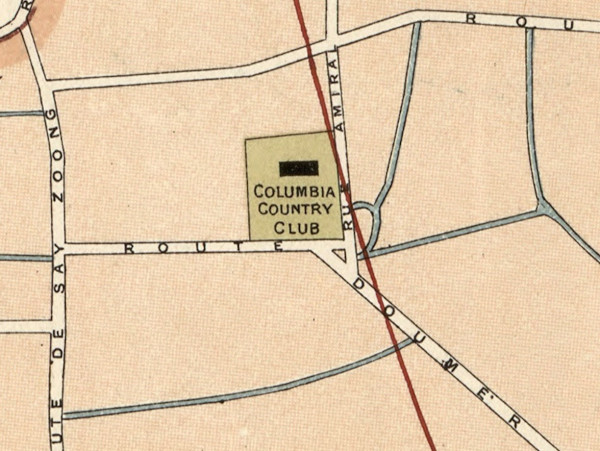 In summer 1926, a new enterprise moved into the old Columbia Club – it was called Cabaret Artistique Chateau des Fleurs. Its owner and manager A. S. Kevorkoff was "formerly director of a Russian theatre in Vladivostok." The new cabaret was described as "a place of amusement, entertainment and conviviality altogether different to any of the numerous ones" already existing in Shanghai. The competing venues that summer were the Carlton, Majestic Hotel Ballroom, Plaza, Del Monte and the newly opened Palais Oriental – all of which were staffed with Russian cooks, waiters, musicians and dancers.

"To the innumerable amusement resorts already existing in Shanghai has now been added the Chateau des Fleurs, occupying the site of the old Columbia Country Club on Route Doumer. This photograph of the management and representatives of the French Municipal Council was taken at the opening of the new venture." 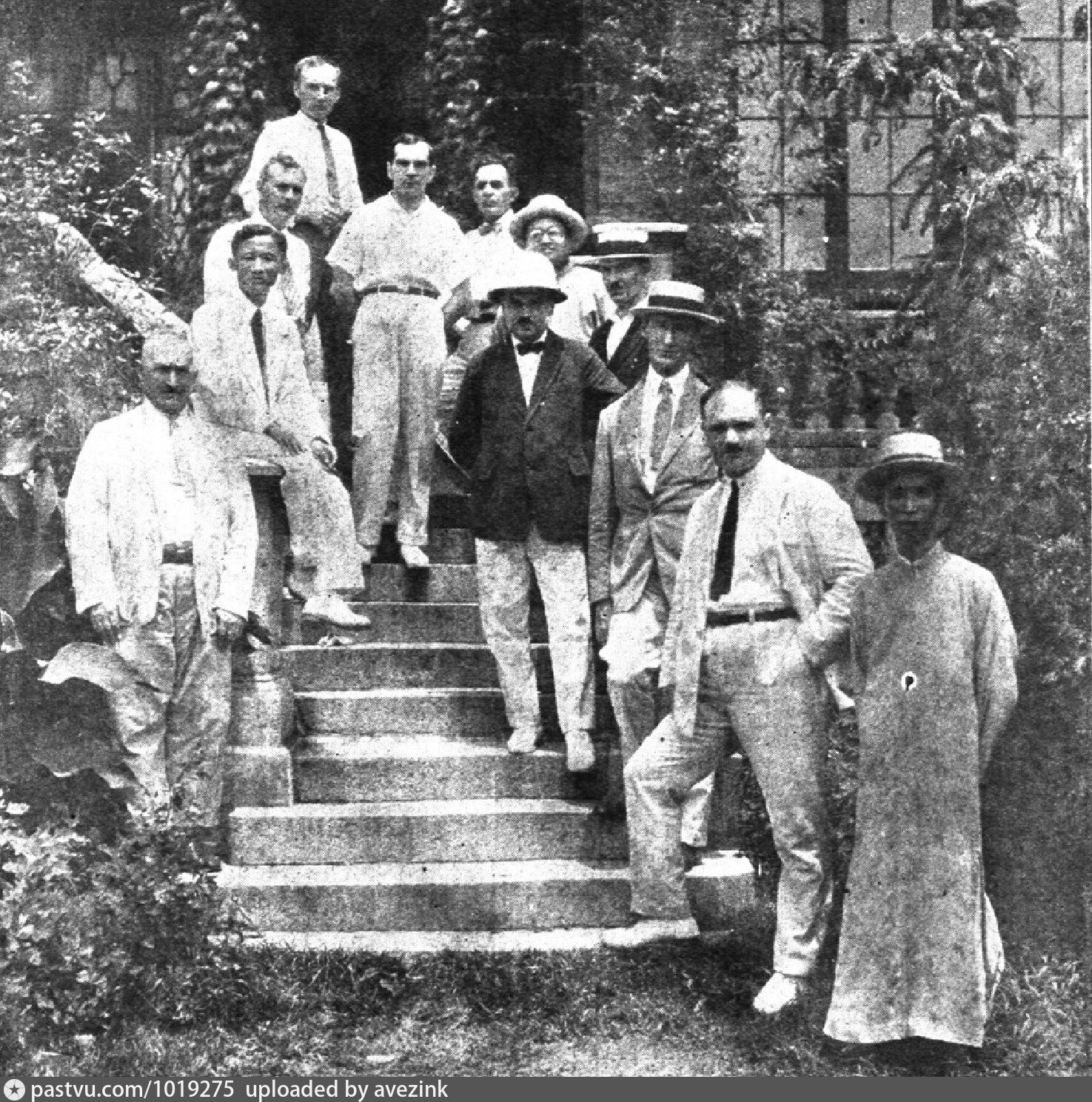 Past the main gate at 50 Route Doumer, the "winding lantern-adorned driveway" led to the garden with "many cosy nooks and tables for meals or refreshments here and there." "The entire Country Club property has been utilized. The old club-house offers large private dining rooms, a typical Russian open-air theater has been placed adjacent to it, while across the broad lawn, which is well decorated with colored lanterns, flags and flowers, a sort of cafe chantant has been built where, upon a large stage there will be offered nightly a program of a variety nature essentially Russian."

The restaurant served the French cuisine with the Russian flair, including such dishes as borscht, piroshki and gourievskaya kasha: The entertainment program was "carried out in the open air, under the cover of an awning," which offered "excellent acoustic properties." The acts began at 10 pm and continued until 2 am; between the numbers there was "general dancing."

The evenings at Chateau des Fleurs were always interesting: "On Thursday night, for instance, patrons were able to obtain an admirably cooked cold supper, and then pay attention to a variety entertainment of a distinctly high class nature. The program has a classical basis and there are able Russian artists to carry it out." Here is the program for one of the nights in August 1926: 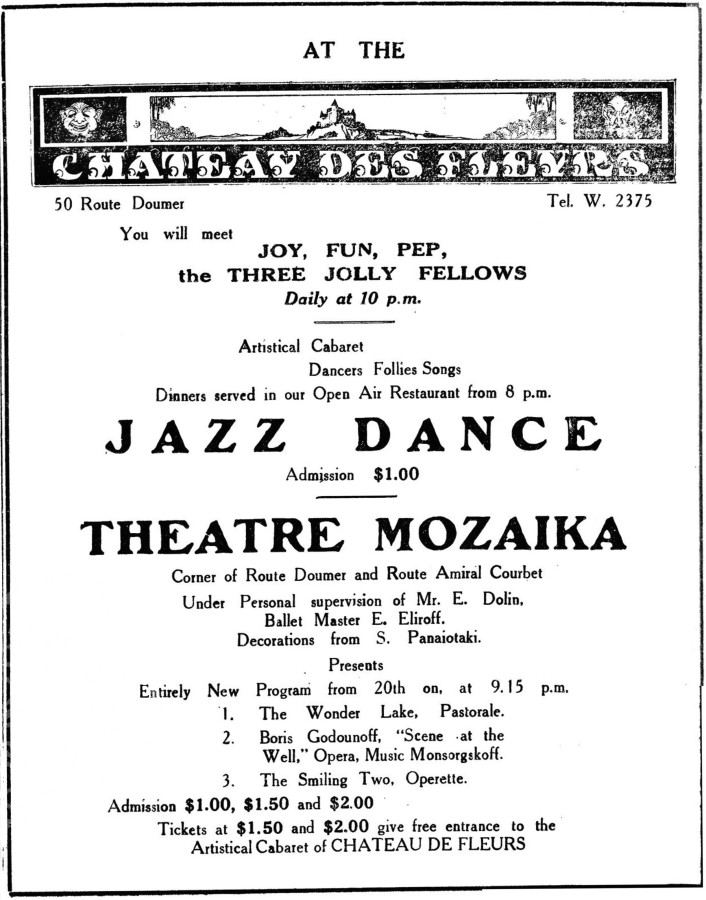 Edward Eliroff, listed as the ballet master in the above program, had a long career in Shanghai's cabarets: in the 1940s he was orchestrating the Miss Shanghai beauty pageants at the Arcadia Cabaret (which opened in 1937 in a villa diagonally opposite from the old Chateau des Fleurs).

This photo shows the Bacchanalian dance on the stage of Chateau des Fleurs. "Note the spirit of gay abandon on the faces of the Bacchantes and their partners," says the caption. Dionysian, Bacchanalian and other "pagan" numbers, as well as tableux vivants with "bronze" and "marble" sculptures, were very popular in the mid-1920s, because they allowed to practically undress the performers:

However fun this place was, the "Cabaret Artistique" burned out by the end of the summer. The high running costs were evidently not compensated by the paying audience, and the management failed to return the bank loan.

The next tenant at 50 Route Doumer was Shanghai's first and largest movie production studio – Star Motion Picture Co. 明星影片公司. It stayed in this building from 1927 until the company's forced closure in 1937. During that time the studio produced a large number of movies, including the legendary Street Angel (1937).

Here are some photos of the studio's headquarters (we are looking at two different entrances, one at Route Courbet and one at Rue Bourgeat): 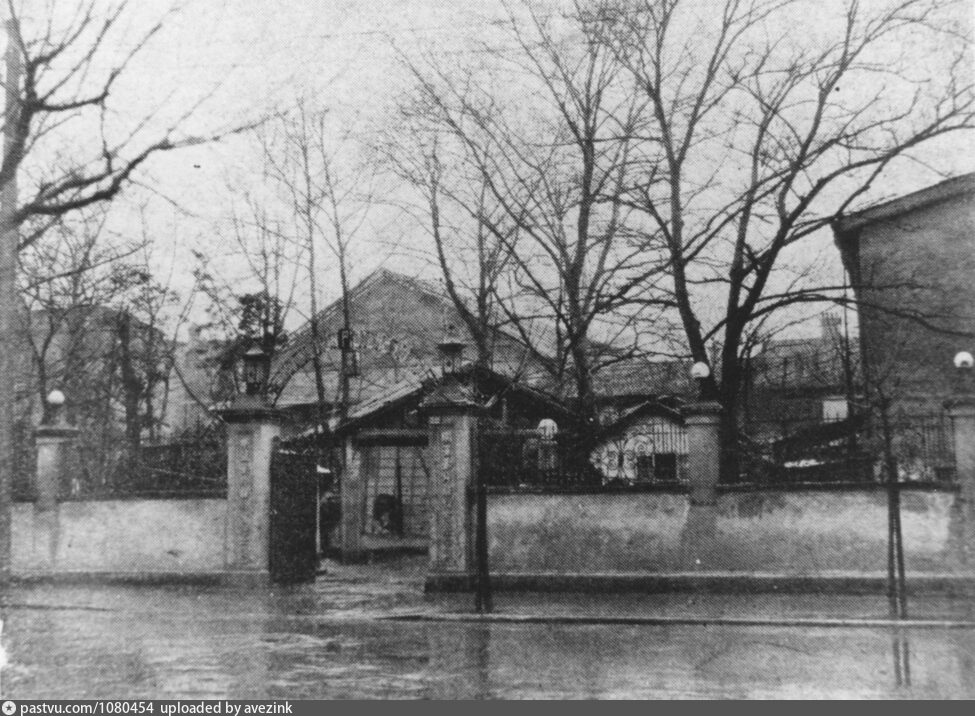 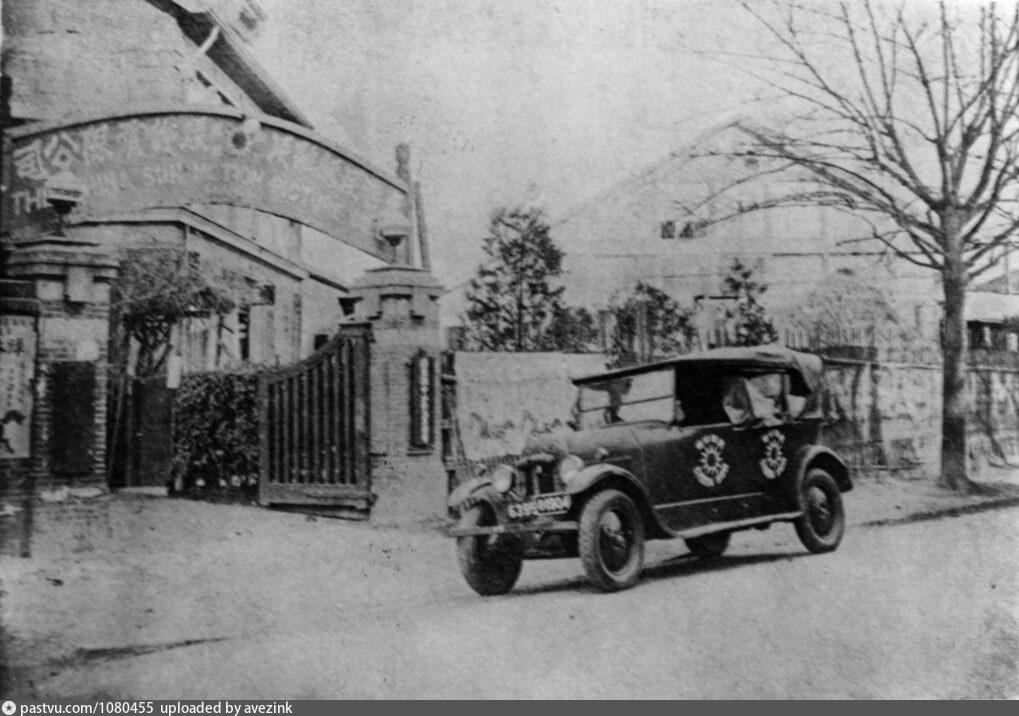 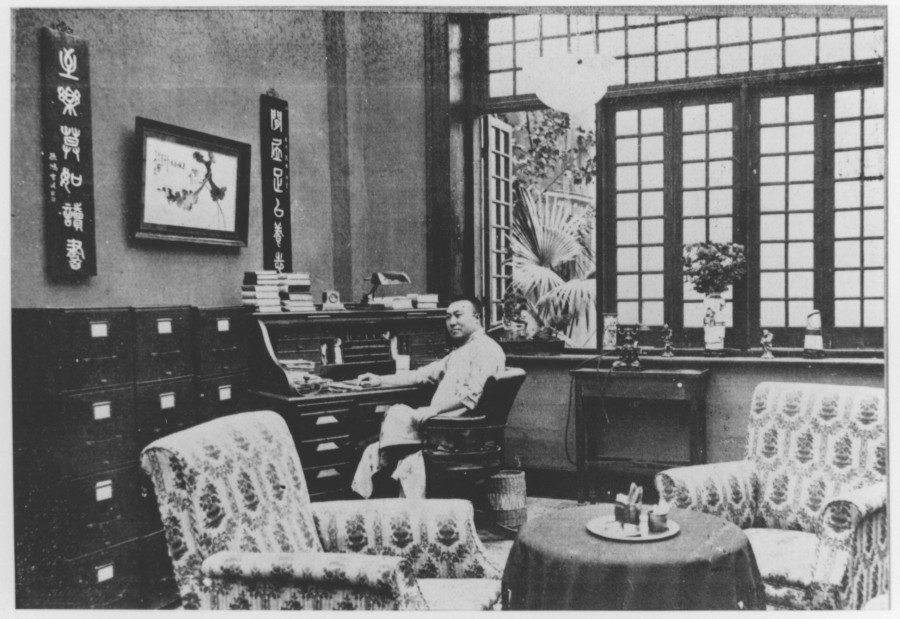 The studio had another, larger, compound, on the south bank of Zhaojia Creek near Siccawei (Xujiahui): The Star Motion Picture Co. was the last tenant of the great French Concession villa. After the stuidio closed and moved out, the site was redeveloped and replaced with the terrace compound 裕华新村, built in 1941. 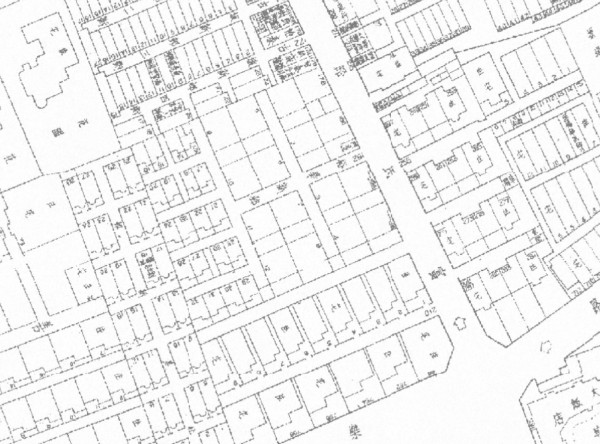