After a long voyage from provincial Russia (the luggage tags indicate Tula, Moscow, Berlin and Paris), the émigré arrives in decadent Paris, clasping the volumes of the Russian classics Pushkin, Gogol and Tolstoy, as well as a 4-volume set of Dostoevsky. Josephine Baker is flitting like a firefly against the Eiffel Tower, while a faceless but brutal gendarme is menacing with his baton. The industrial smoke fills the sky, offsetting the the overbuilt landscape with mad traffic. A line from Uncle Vanya captions the cartoon: "We shall live, Uncle Vanya. We shall hear the angels; we shall see the sky sparkling with diamonds." 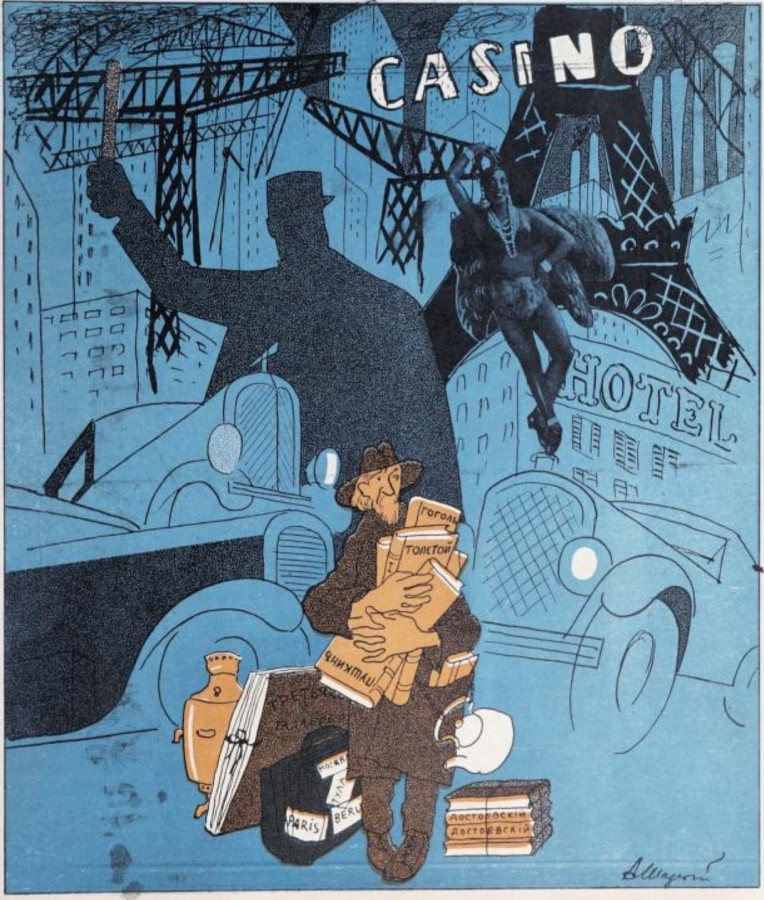 Long queues for food and commodities in the Soviet Russia that the èmigrès left behind: 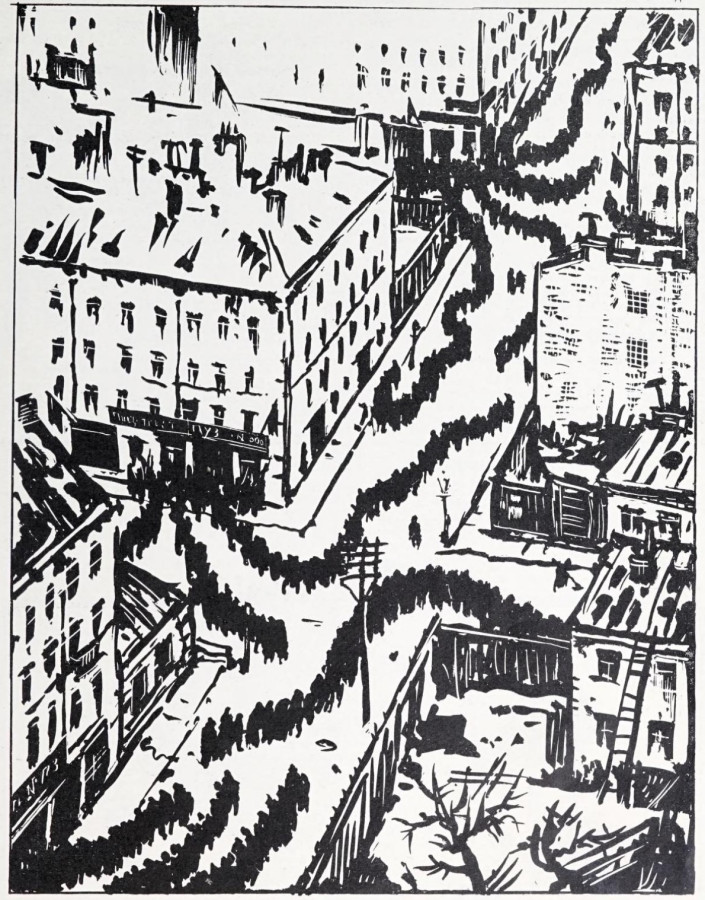 [See more images...]
Russian emigrant in a linguistic predicament: "Golly, do I have to wait for the train until the next year?" 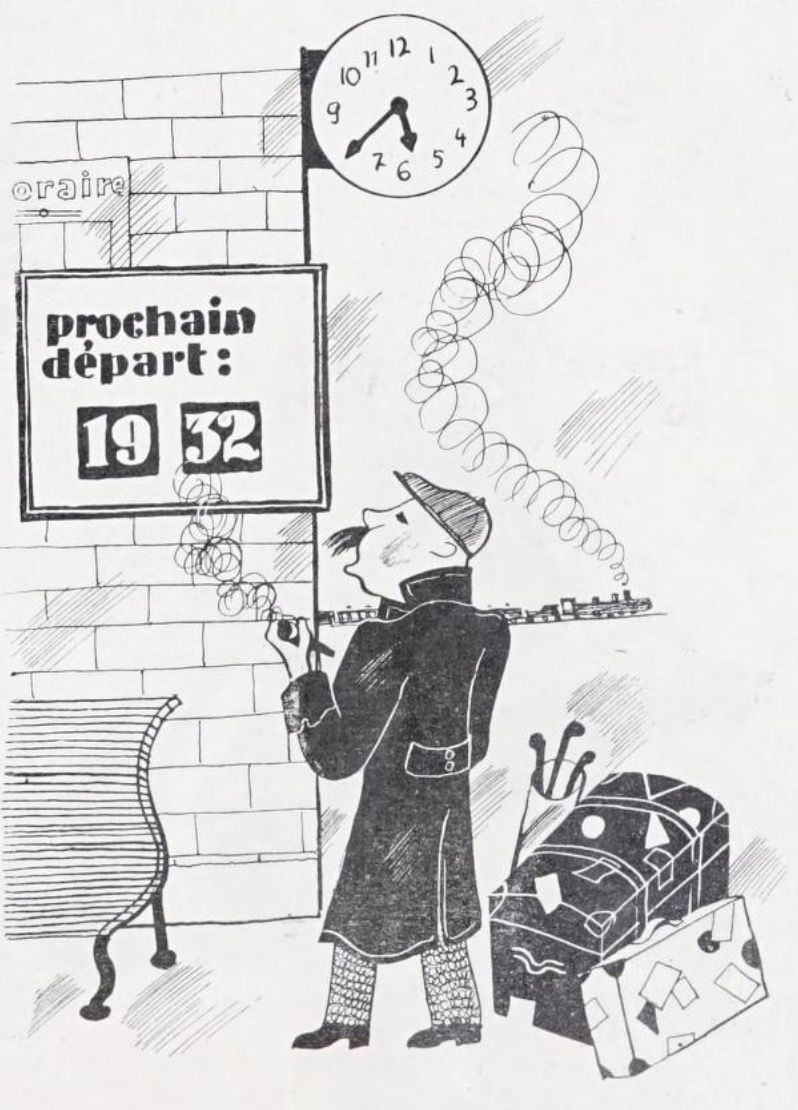 Women working, men building castles in the air... The same was observed in Shanghai around the same time. Caption: "The wife in fashion is indentured, while he is looking for adventure." (loose translation for the rhyme) 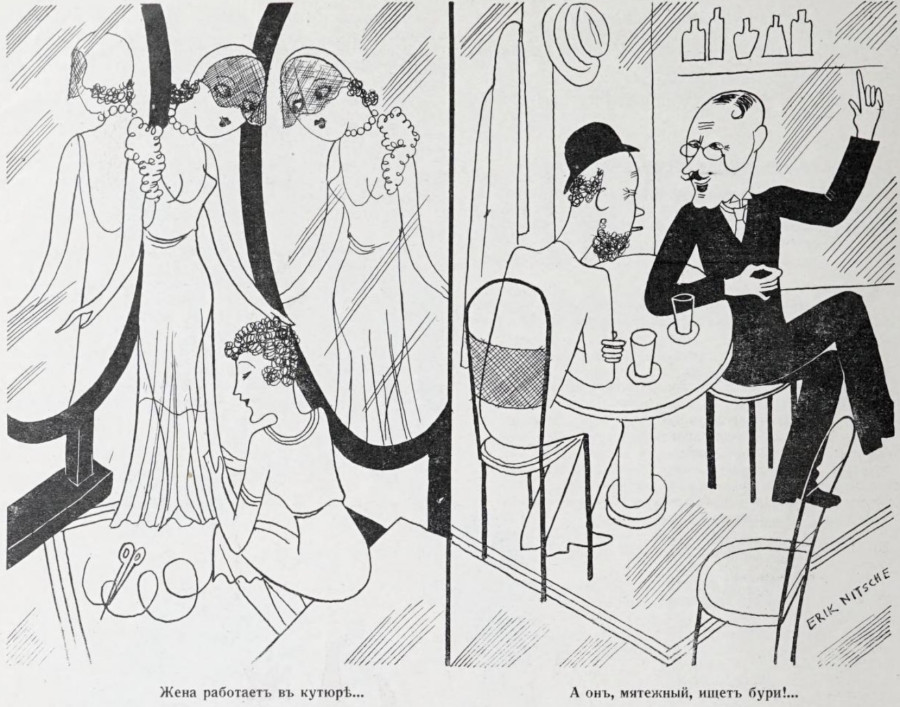 In reference to the accusations that the émigré were isolated from the problems of their motherland: "We've been riding underground for twelve years, and they keep saying we're not grounded." 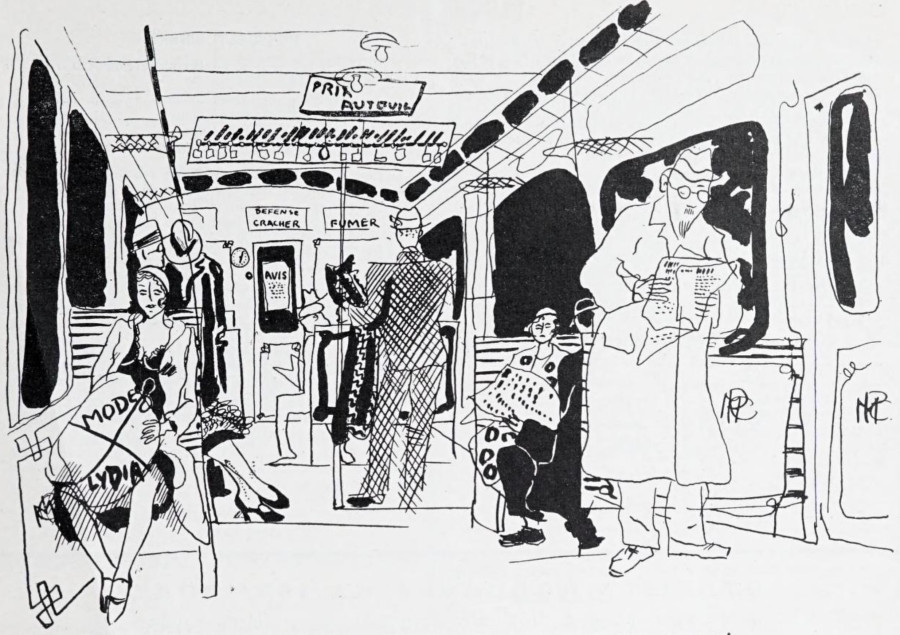 Another illustration of the "lust for soil," subtitled "Neighbors:" 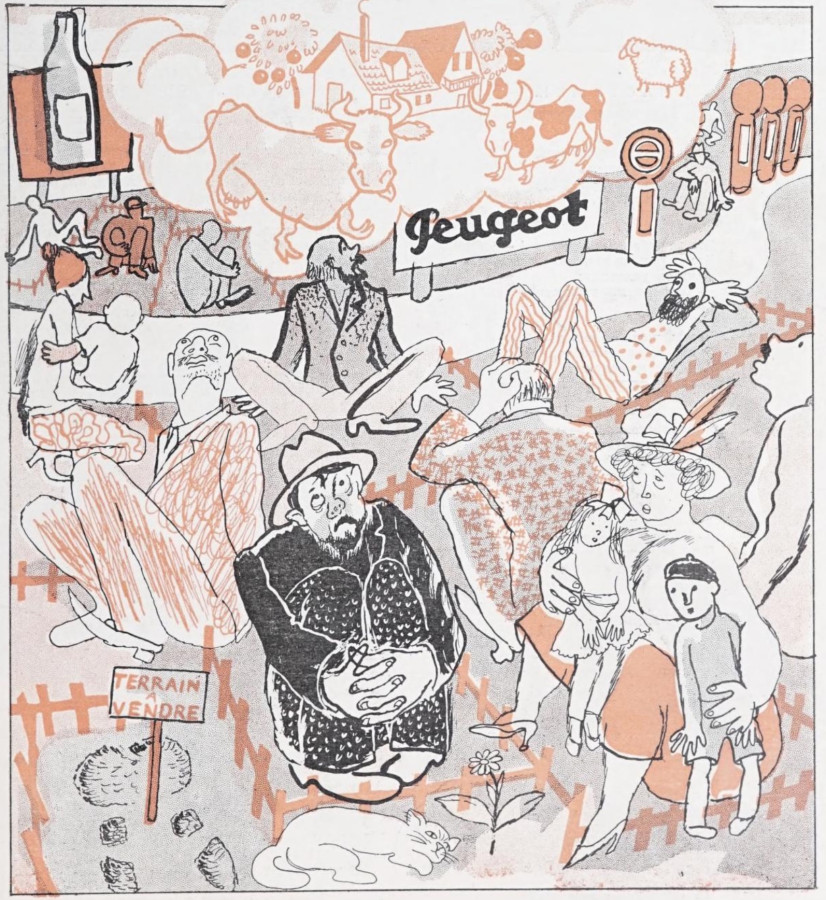 A handsome, dow-eyed waiter in a Caucasian cuisine restaurant is eyeing his moneyed client; captioned "In a strange land even an old crone can be good for something:" 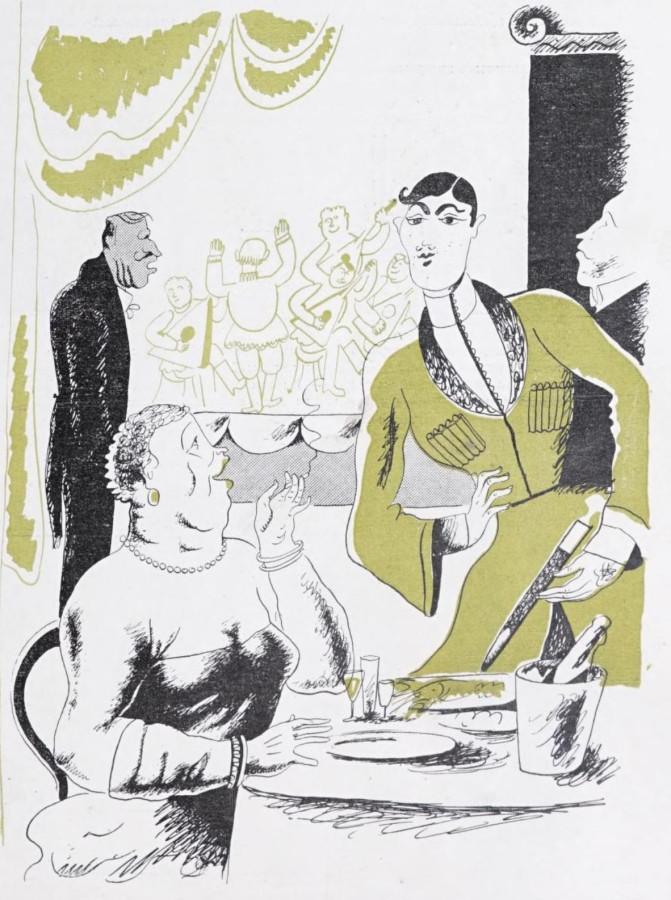 In front of the Russian store in Paris: "I have to warn you – their sausage wrapping paper uses the new spelling." (The name of the store is, however, spelled in the traditional manner.) In Shanghai, too, some stores and periodicals switched to the "Bolshevik" spelling, which eliminated some obsolete letters, while others ignored the 1918 reform and continued to use the old system well into the 1930s. 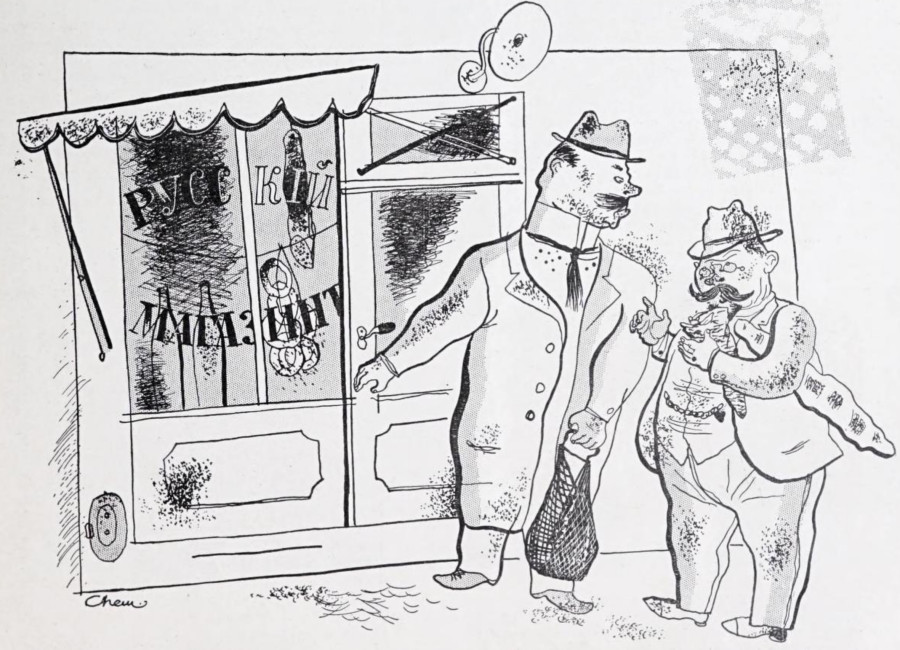 "Our émigré life." Crowds besieging the Russian restaurant, and no one at Turgenev's Library: 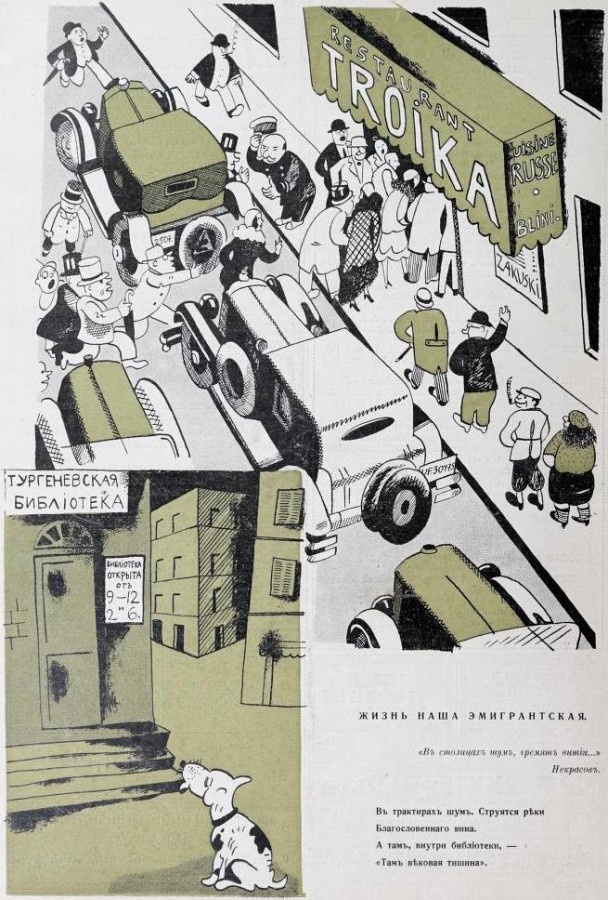 The fear of becoming too bourgeois. Captioned "Europe:" 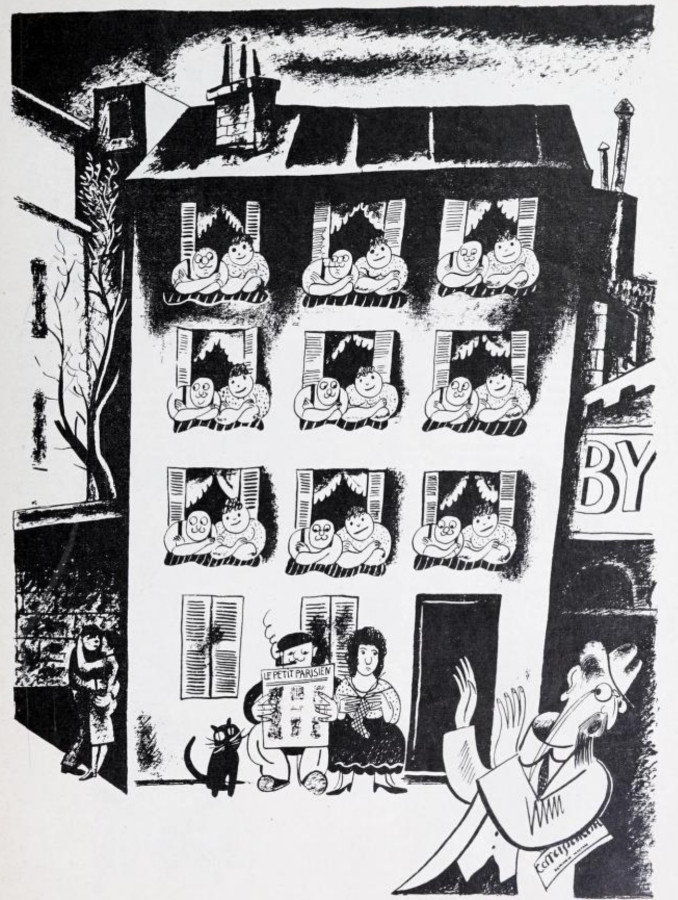