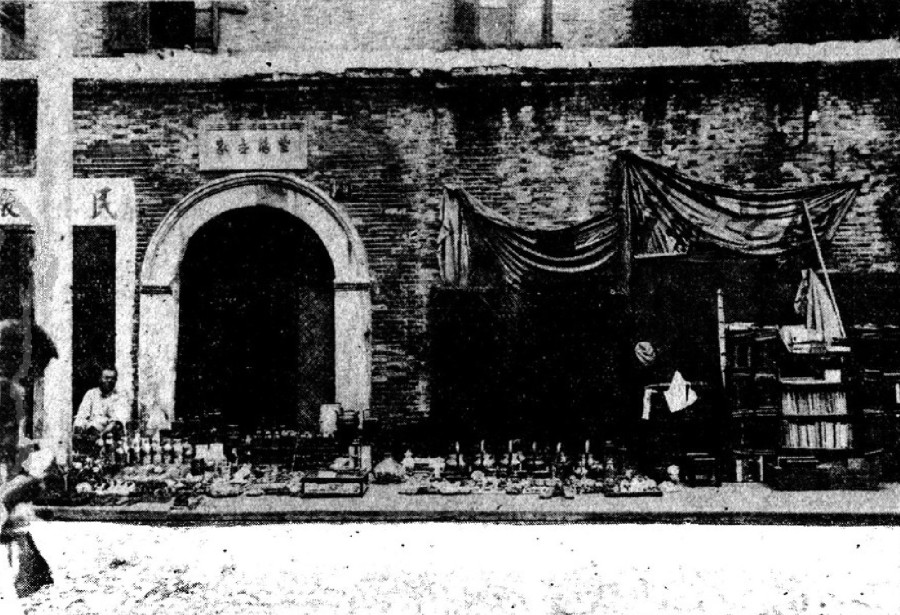 Pahsienjao Thieves' Market, "where a customer may purchase anything from a gramophone to a picture of his grandmother." China Press, June 1932

Plunder Bargain Counters
If your silverware is lost, strayed or stolen, perhaps it could be found in one of the many "Thieves' Markets" of Shanghai – dealers like obscurity

"Nobody knows just how many "thieves' markets" there are in Shanghai, because for one thing they are always disguised under some other name and for another they never admit that they have anything to do with thieves anyway. But Pahsienjao 八仙桥, in the French Concession, got its big start in life during the evacuation of Chapei. The whole street, from beginning to end, is a series of stalls where anything might be found from German prayer books to a pair of shoes which first saw the light of day in one of the big shoe stores. The variety of goods displayed here is its chief charm. There are gramophones, statues, dishes, shoes, beds, a baby's crib painted an hilarious red and green – a jolly start in life for any infant – curios (of a sort) – they are curious all right, lanterns for Chinese Diogenes, pictures (you might fnd your grandmother there if you look long enough) and books. While libraries predominate in English, French, German, Italian and Chinese, one erudite section contained a commercial geography, Elementary Algebra, Funds and Their Uses – very useful, and for some obscure reason, "Macauley's Essay on Addison-Smith."

"A de-luxe Thieves' Market is on the corner of Canton and Kiangse Roads, which bears the label "Antiques and Jade Bazaar." You can get a pretty good looking "jade" ring there for 60 cents, providing you can "knock'em down" from the original price tag of $600 to 60 cents. It's all part of the game. The proprietor won't allow pictures to be taken there – afraid someone will recognize a misplaced item and come in an raise the deuce about it. The nicest idea of the whole trade is that all the thieves take it very seriously. They have a special God of Thievery before which they kowtow and mumble words of gratitude or supplication quite faithfully and regularly. They seem to recognize the fact that the victims of their thievery don't feel the sae way about it but from their own point of view it's quite okeh."

The Jade Bazaar, mentioned in the article, was a two-story building on the southwest corner of today's Guangdong and Middle Jiangxi Roads 广东路江西中路. There is now a modern high-rise complex there.

As for Dongtai Road 东台路, which hosted a popular curio market until a few years ago, I am not 100% sure this was the location of the old Thieves' Market, but it very likely. Otherwise, why would the French Concession authorities try (unsuccessfully) to banish unauthorized stalls along Rue Hennequin (old name of Dongtai Road), in the mid-1920s. Such things tend to survive through the decades in spite of regime changes – until the developers step in. Do yourself a favor and walk through the market one last time, before the online street view from 2014 gets updated and we'll loose even these images. The old market and its original architecture were destroyed in the recent years.