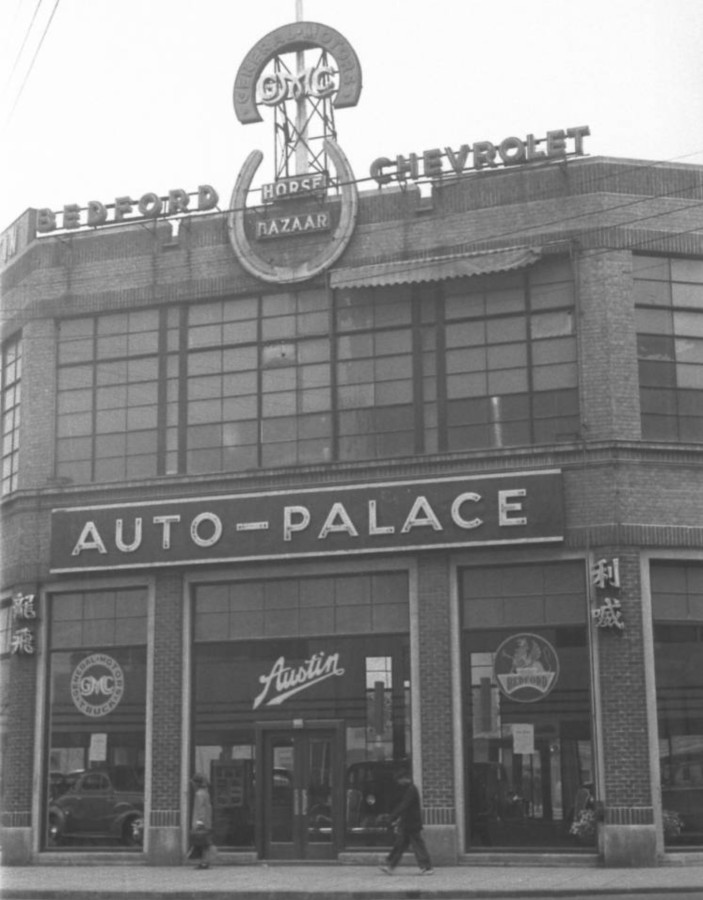 Shanghai old-timers may smile at the sight of mannequins and dresses displayed in these vitrines, because they remember this building as a garage. The Auto Palace, however, was not just a garage in the narrow modern sense, but a veritable temple of car culture. It had showrooms, service stations, assembly workshops, a driving range on the roof and a gas station in front.

The company that built the Auto Palace was the product of a merger of two old-time enterprises. One was the Shanghai Horse Bazaar, built in 1853 simultaneously with the relocation of the original Racecourse to its later position, where the People's Square is today. The Horse Bazaar ran auctions for racing ponies and utilitarian workhorses, and in the back there were the coachwork and locksmith shops. In 1914, with the advent of the automobile, the company added "Motor" to its name and subsequently dropped the equine trade altogether.

The other ancestor was the Auto Garage, opened in 1903 by E. Pinguet. At that time there were only a dozen automobiles running on Shanghai streets, so the Auto Garage consisted a shed located where the French Park (Koukaza) emerged later. The French, evidently, also held the record for bringing the first automobile to Shanghai – it was imported in 1900 by a certain Mr. Delvy. When Sennet Freres acquired Pinguet's business in 1915, they lent their Chinese name to it, 利威. The Auto Palace became a public company in 1930 and swallowed up the Horse Bazaar & Motor Co. in the process.


[Read the rest and see the illustrations...] 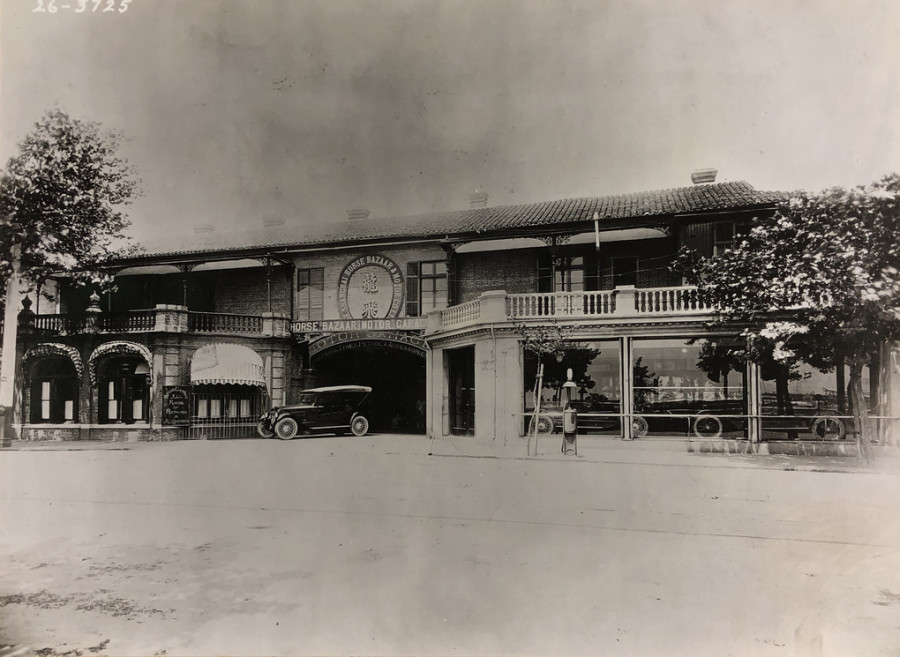 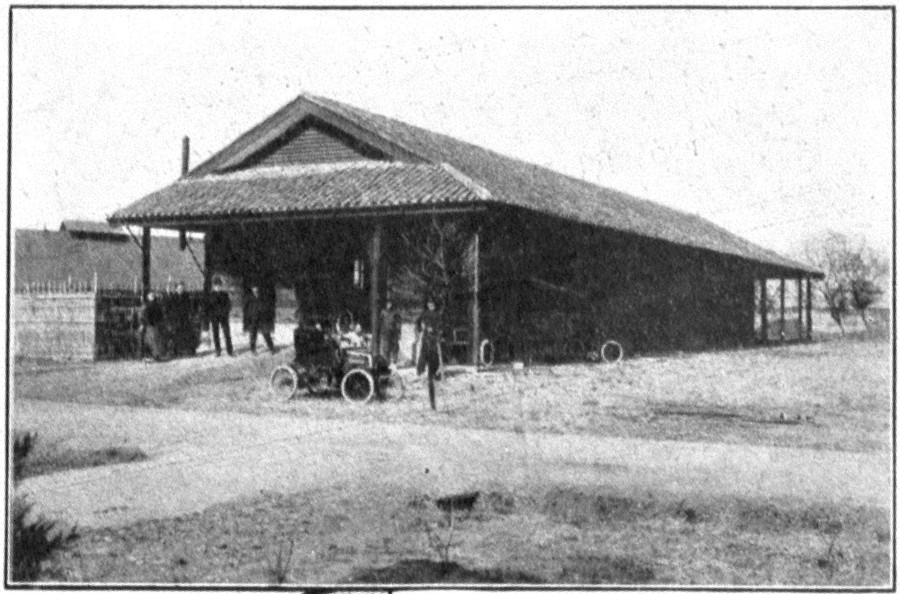 The original Auto Garage of E. Pinguet, built in 1903 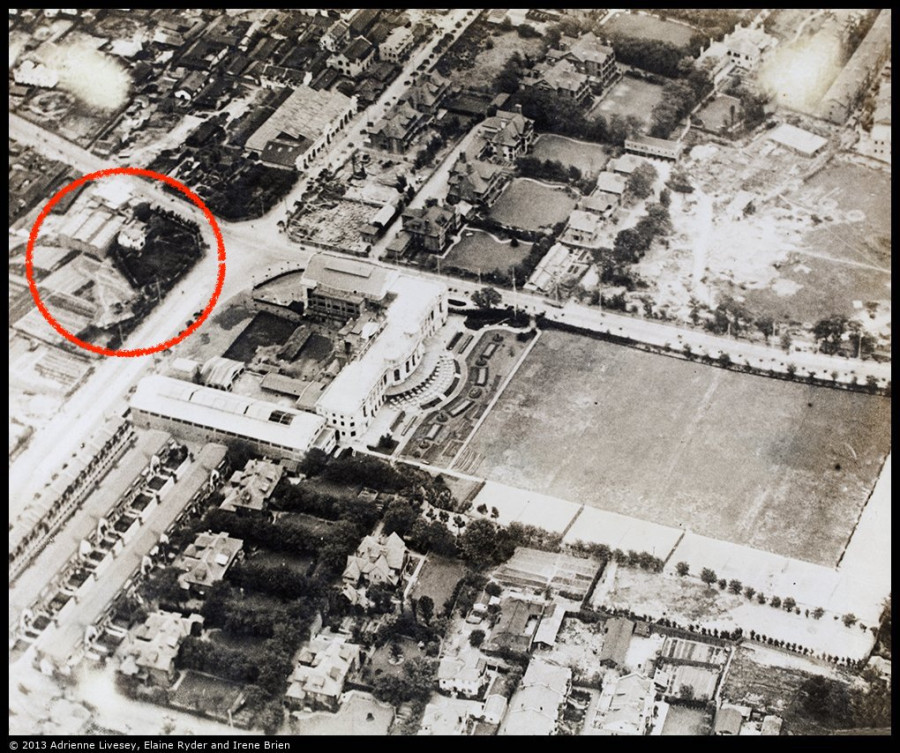 The 1927 aerial view of the place, showing the site where the Auto Palace came to be built. Image: HPC

To built the new headquarters, the company acquired a lot at the northwestern corner of Rue Borgeat and Route Cardinal Mercier. In 1921, China's first automobile show designated this part of the French Concession as Shanghai's "motor-mart," as the press called it. Since then, multiple car-related businesses came to be located on these blocks, such as Bill's Motors, Hartzenbusch Motor Co., Shanghai Service Co., Union Garage, Lee Lee Garage, Adam's Garage, Reliance Motors and the Renault Service Station. By the time the Auto Palace trumped them all, auto salons and service stations in Shanghai numbered in the hundreds.

In order to compete, the new Auto Palace bet on modernity, scale and service, at the cost of half a million dollars. The two-story building was designed by the city's top architecture firm, Palmer & Turner, one of whose projects – the Cathay Mansions – came to grace the opposite corner a couple years earlier. Inside the Auto Palace, there were ramps enabling the speedy transition from the ground floor, where the showrooms, workshops and the car wash were located, to the first floor with its machine and painting shops, and further up to the testing grounds on the roof. The opening of the Auto Palace on July 16, 1932, was celebrated with a two-day auto show.

The drawing of the building by the architects at Palmer & Turner 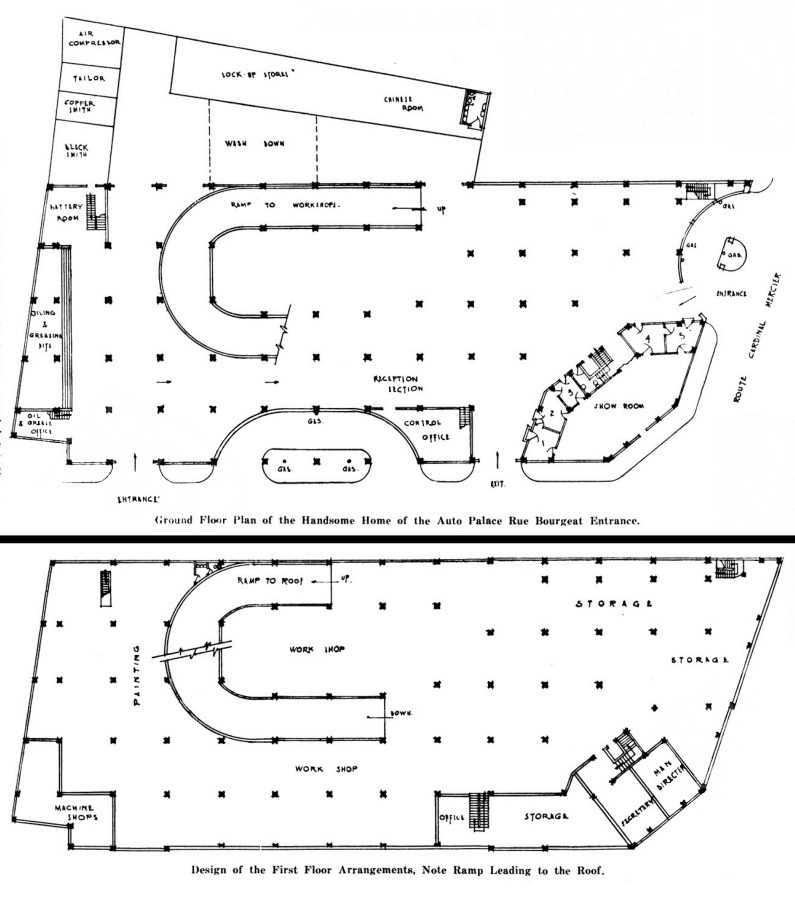 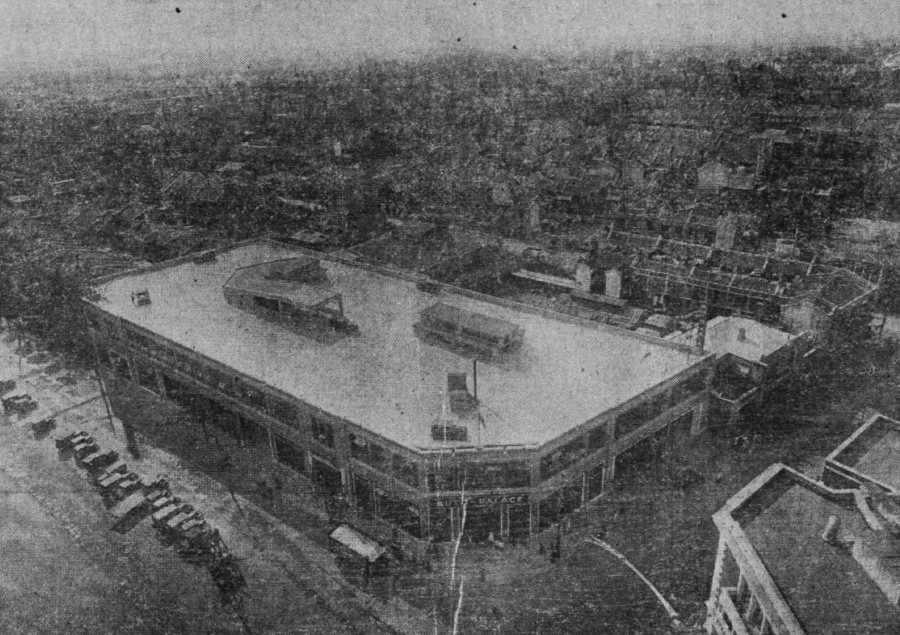 The Auto Palace seen from the 14th floor of the Cathay Mansions; the testing grounds on the roof and the ramp can be seen

It is estimated that by 1933 only 1% of China's population was living in Shanghai, driving 40% of the country's cars, which amounted to about 11,000 vehicles. The overwhelming majority of the car owners were westerners, among whom about a thousand were Russians. The latter were also numerous in the staff of the Auto Palace and its administration: the Count Ivan Dolgoroukoff was the managing director, while L. N. Poliakoff was the director for service and car parts sales. The Auto Palace, like other salons in Shanghai, assembled cars from imported parts of such brands as Ford, Chevrolet, Buick, Renault, Morris, Citroën, Austin and Essex; the American brands were the most preferred.

There was not a shadow of a doubt that the city's future lies with the automobile, and so the construction of the civic center began in the faraway district of Yangtszepoo 杨树浦, on a wide symmetrical grid, with enormous buildings set apart from each other. But the plan was left unfinished because of the Japanese military incursions and then the occupation (1937–1945), which interrupted the import of construction materials, car parts and fuel. The occupying army seized most vehicles from their owners, but the shortage of gasoline forced them to refit the engines with coal-powered stoves or use car bodies in horse-drawn carts. In the Communist era, the car became the status symbol for the party cadres, and the Auto Palace retained its function, rebranded as the Friendship Auto Store (友谊汽车服务公司).

Personnel of the Auto Palace on the roof, posing against the ramp 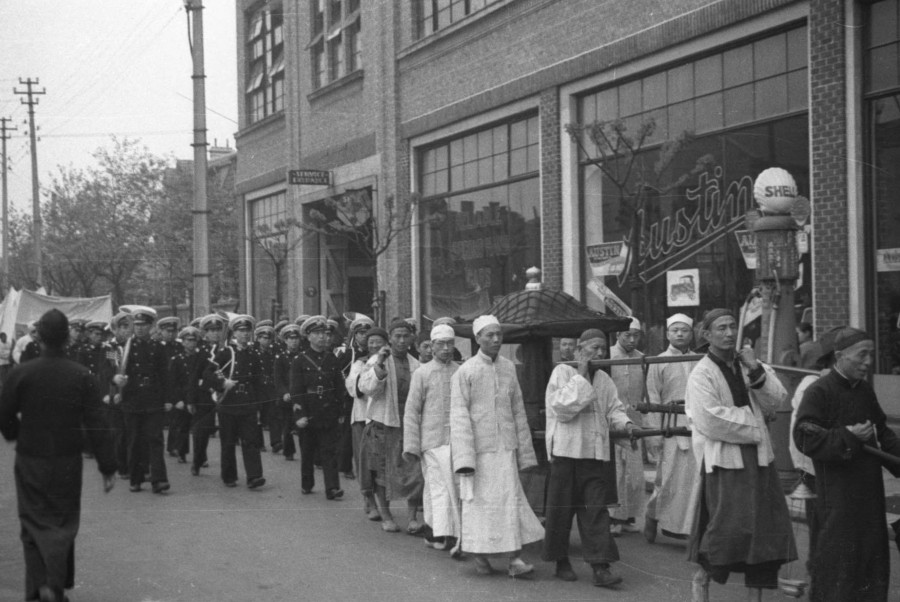 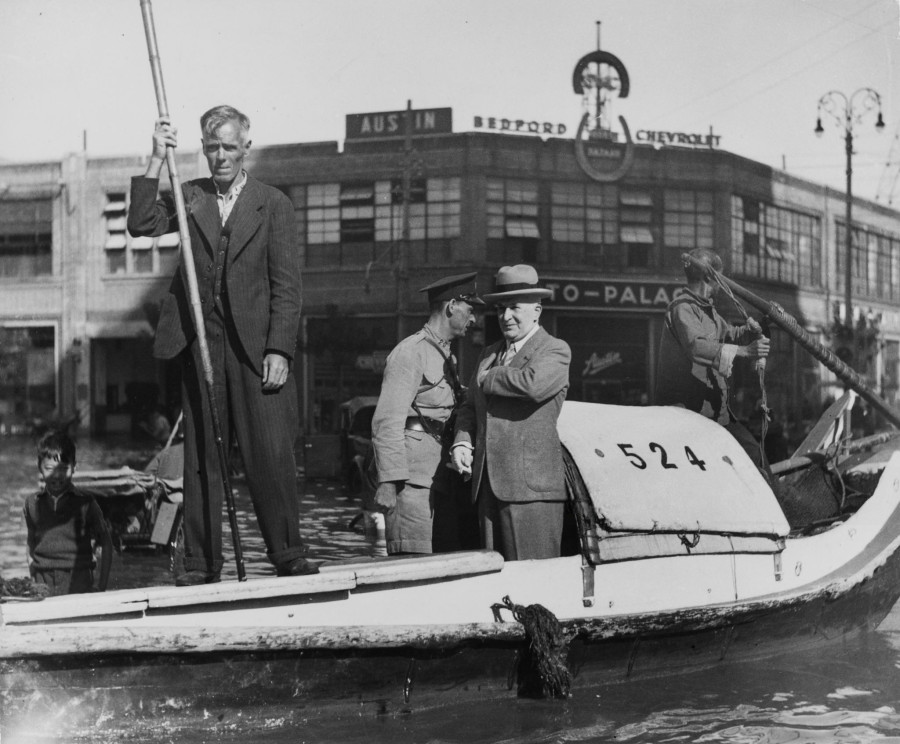 The French ambassador H. Cosme creatively dealing with the summer flood in 1940, at the corner with the Auto Palace Image: Getty 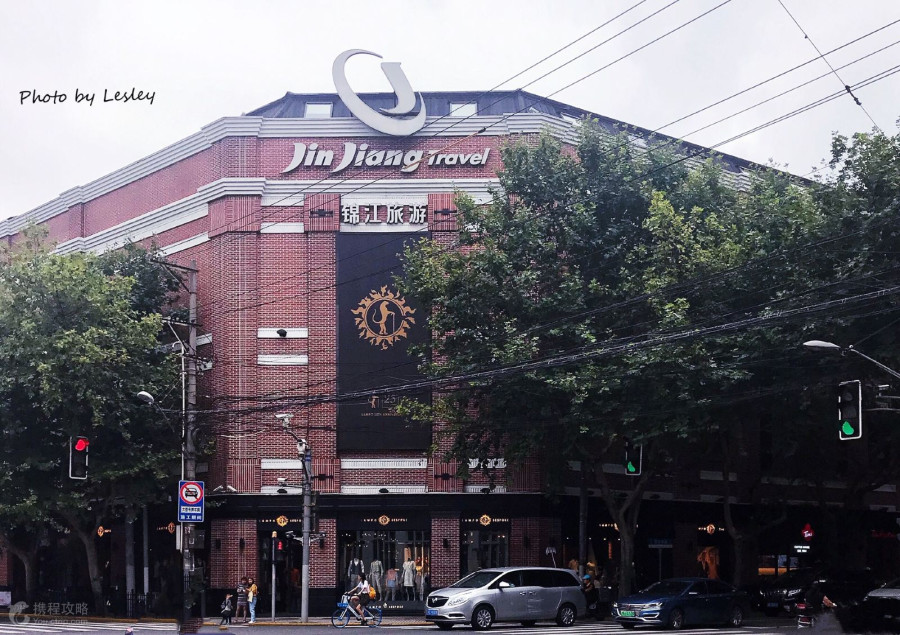 See historic photos of this building on PastVu.

This article was originally written for the Russian-language series in Magazeta: https://magazeta.com/arc-garage-palace/