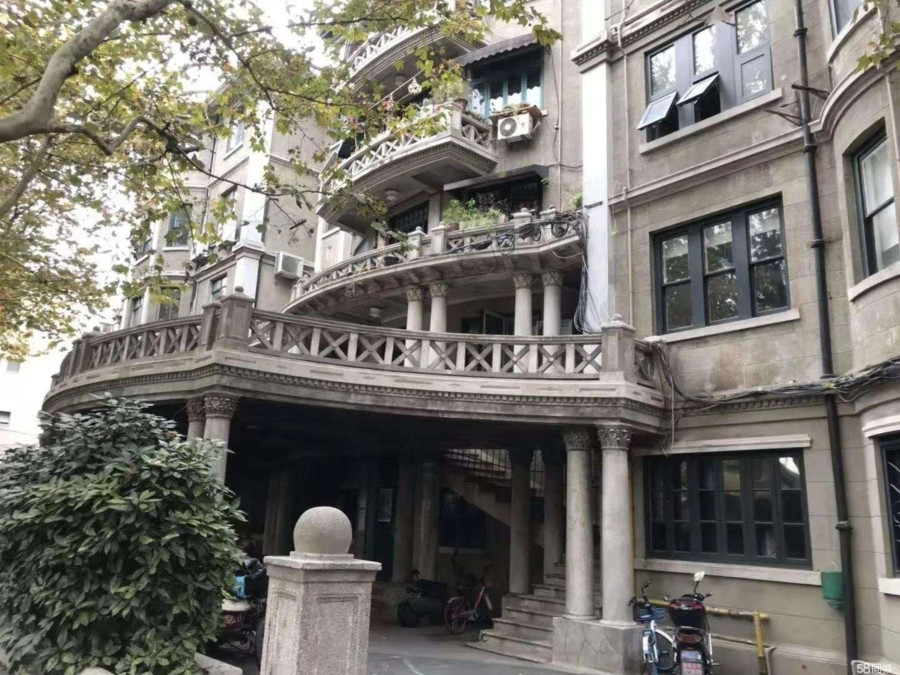 The luxurious curves of this historic apartment house, at 1331 Middle Fuxing Road, stir the imagination. The name "Blackstone Apartments," confusingly translated into Chinese as 黑石公寓, has produced some guesswork along the lines of "black stones imported from England." In reality, this was one of the few buildings in Shanghai – although not the only – to be named after its architect.

For 1924, this was a quite a revolutionary project. The western part of the French Concession consisted of long roads lined with plane tree saplings and endless bamboo thatch fences of rich foreign residences. In between, there were rural Chinese hamlets, gardens, farms and multiple creeks. The new apartment house would infuse this pastoral setting with the dynamism of the city. The architects were an American amateur, James Harry Blackstone, and an English professional, George Alexander Johnson, of the firm Lester, Johnson & Morris. They chose to design a building in the baroque style, popular with offices and institutional buildings at the time. Special pride was taken in the fact that this was "one of the first buildings to be built without a Chinese contractor" – although the real trick would be to build it without any Chinese workers.

James Harry Blackstone (1879–1965) started as a Protestant missionary in China's provinces and then inherited an enviable position from his father: he became a sole agent of a multi-million private fund that the Californian magnate Milton Stewart bequeathed for the education of Chinese children. The management of this fund took J. H. Blackstone into various parts of China, where he dabbed in architecture; some of his known projects include dormitories and an exhibition pavilion in Peitaiho (Beidaihe). It is not known whether J. H. Blackstone's contribution to the Blackstone Apartments in Shanghai consisted less of the design and more of the financing. 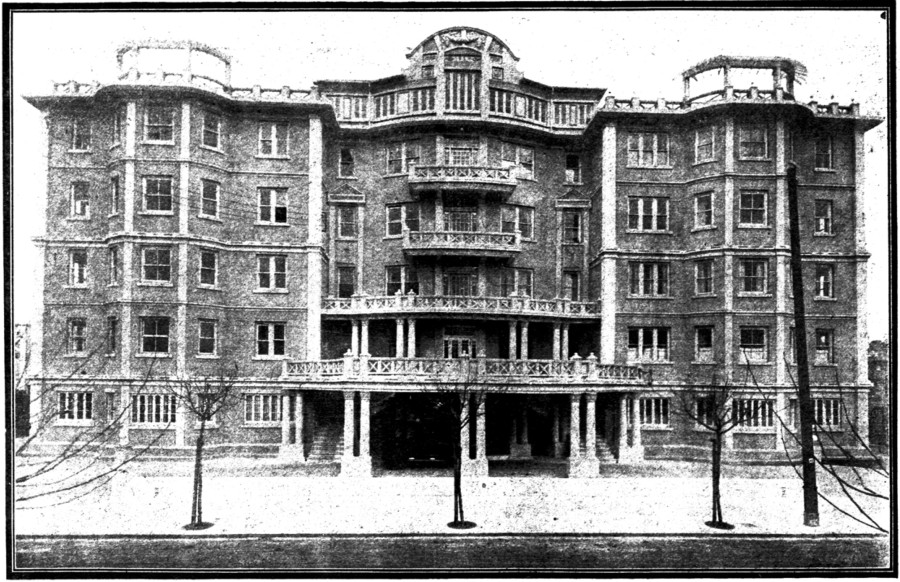 In an anticipatory writeup in June 1924, the North-China Daily Herald proclaimed the new apartment house on Rue Lafayette to be "the largest of its kind this side of San Francisco." There were 31 apartments total: "20 large apartments containing four rooms together with a pantry and a kitchen, 3 medium-sized apartments consisting of three large rooms with kitchen and a pantry, and 8 small apartments composed of a living room, a bedroom, a bathroom and a kitchen, suitable for single ladies or bachelors." The description goes on: ""All bedrooms have adjoining them bathrooms with hot and cold water in abundance, and the latest modern conveniences. The kitchens are fitted with ice boxes, gas rings, fireless cookers, and small laundry tubs." Fireless cookers were turn-of-the-century contraptions resembling thermoses: boiling pots would be placed inside wooden boxes lined with hay, and the cooking finished slowly using the retained heat. The floors in the apartments were of parquetry set in pitch on a concrete foundation, while the hallways were covered with mosaic and terrazzo in various patterns, which are still preserved in many places. 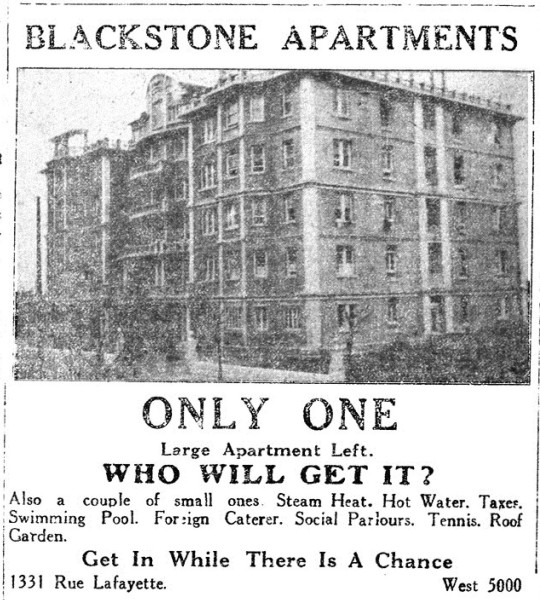 All apartments had direct phone line to the downstairs entrance hall. The servants lived in a separate building and were supposed to be summoned by the phone. Residents could phone and order meals into the rooms. The concept of self-contained living continued in the shared areas: there was a swimming pool for the residents, a clubhouse, a conservatory and a green roof terrace that offered envious views over the sprawling Ezra estate next door. The garden on the south side of the the building accommodated 3 tennis courts and 12 garages. Thanks to its multiple amenities, the Blackstone Apartments was a popular location for high-end social events and private gatherings. Shanghai Missionary Association carried its meetings on the roof terrace – no doubt, thanks to J. H. Blackstone's influence.

"A very cheerful tennis-swimming-dancing party given by Mr. John Huxley to a number of his friends. The picture was taken on the lawn of the Apartments." October, 1925. Image: Shanghai Sunday Times 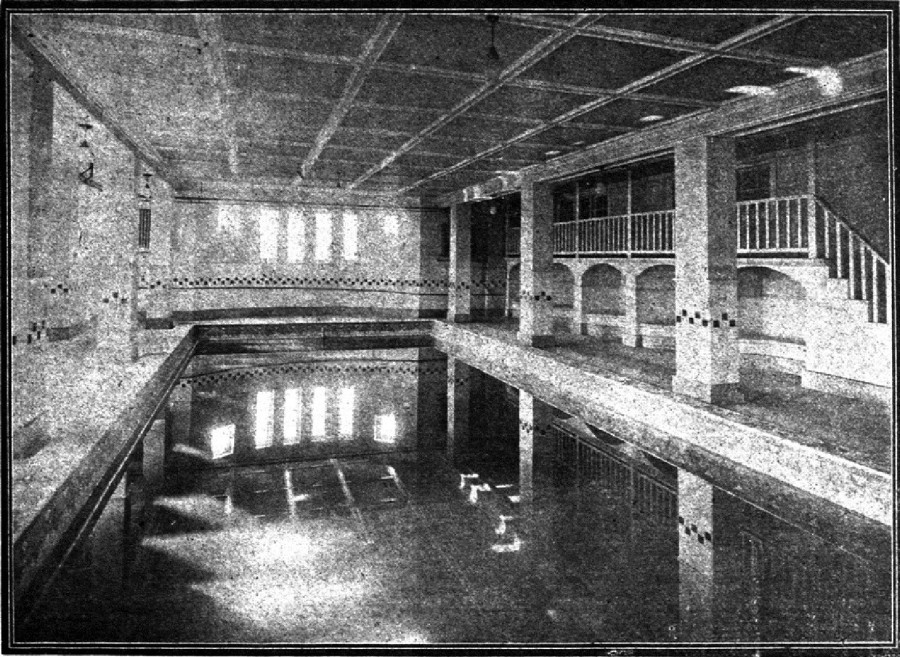 Only foreigners were allowed to live in the building. The elevator was reserved for their use; the Chinese had to use the stairs. For many years the manager of the building was the Swiss lady Marie Therese Stadtmann, who, according to the W. M. Roger Louis, boasted that "she had refused to rent an apartment to Mme. Wellington Koo, the wife of the distinguished diplomat V. K. Wellington Koo, because Mme. Koo was Chinese." After the war the bastion of racism fell: Betty Barr Wang recalled having Chinese neighbors in 1946–1947.

In the 1950s, the last foreigners left and the Blackstone Apartments became completely Chinese. One of the notable residents was the historian Pan Guang 潘光, an expert on China's Jews, who grew up in the building. He recalled how neighbor kids gathered on the roof terrace and told scary stories about the house. There was a creepy tale about the locked boiler room, where even the adults do not dare to go because of the hanged man in the stove. (I presume, the boiler room was locked because central heating was incompatible with high Communism, and all the radiators must have been scrapped for the metal). The Blackstone Apartments is now known as Fuxing Apartments 复兴公寓, and it remains one of the best old houses to live in the city. 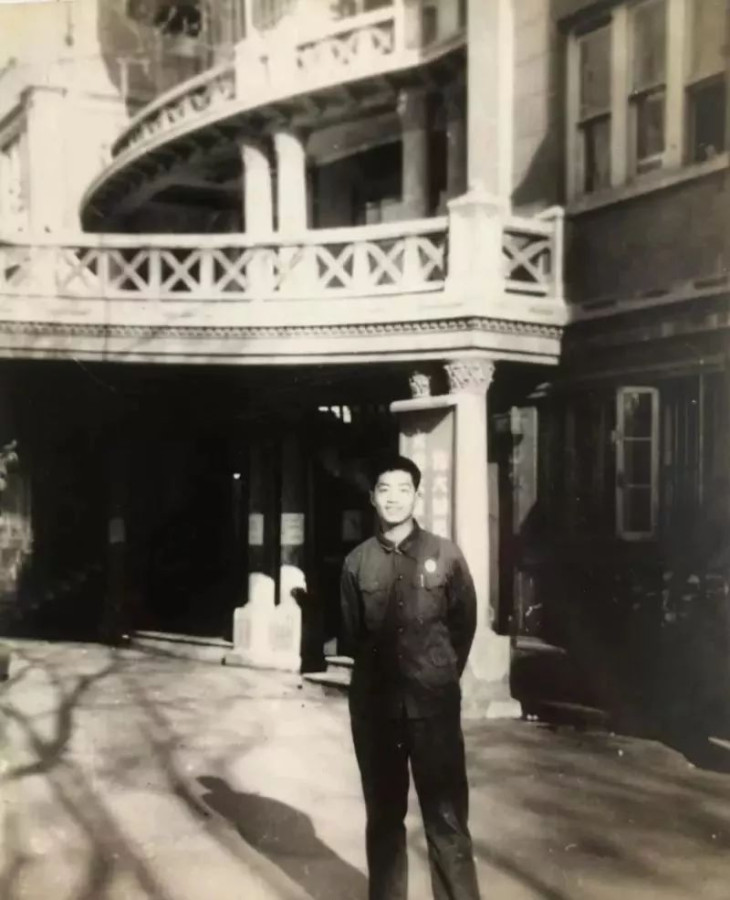 Professor Pan Guang in front of his home. Image source 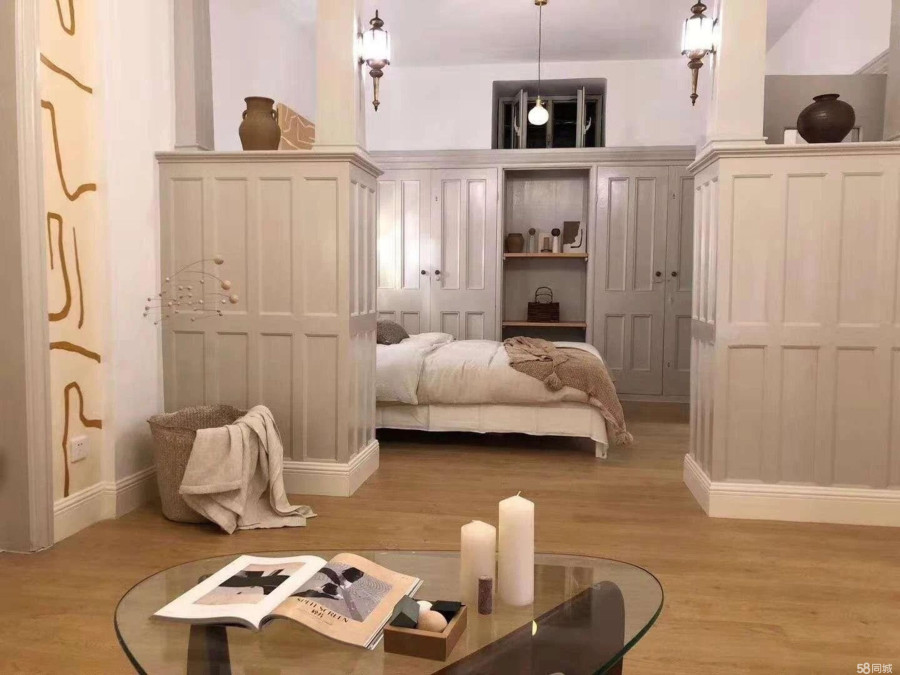 This image from a real estate site shows the repainted, but original, wooden paneling on the walls and partitions, and the built-in cabinets. Image: 58同城

This article was written for the Russian-language series on Shanghai architecture in Magazeta: https://magazeta.com/arc-blackstone-apartments/