Here is a large selection of Shanghai storefronts in the 1940s, found at the Coca Cola Archives, with many of the locations identified by the great 随意-sy: Ideal Haberdashery, owned by the Vitenson family, located at 835 Avenue Joffre (by then renamed Linsen Avenue), right next to the entrance to the Russian-populated lane compound Linda Terrace. The sign shows the store's Chinese name too: 爱地也耳. The Coca-Cola photographers were, of course, more interested in the Tai San Co. Provision Store 太山食品公司, which sold their drink. 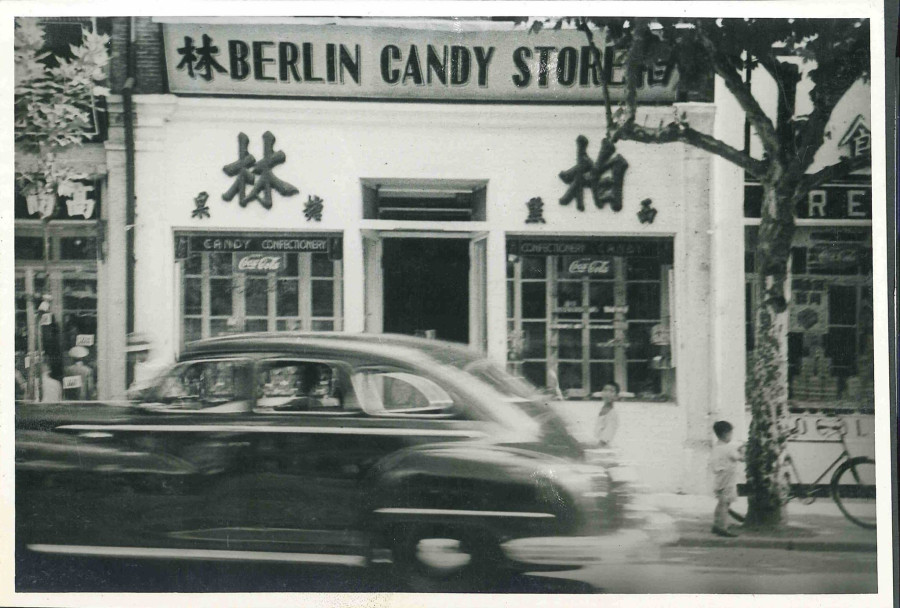 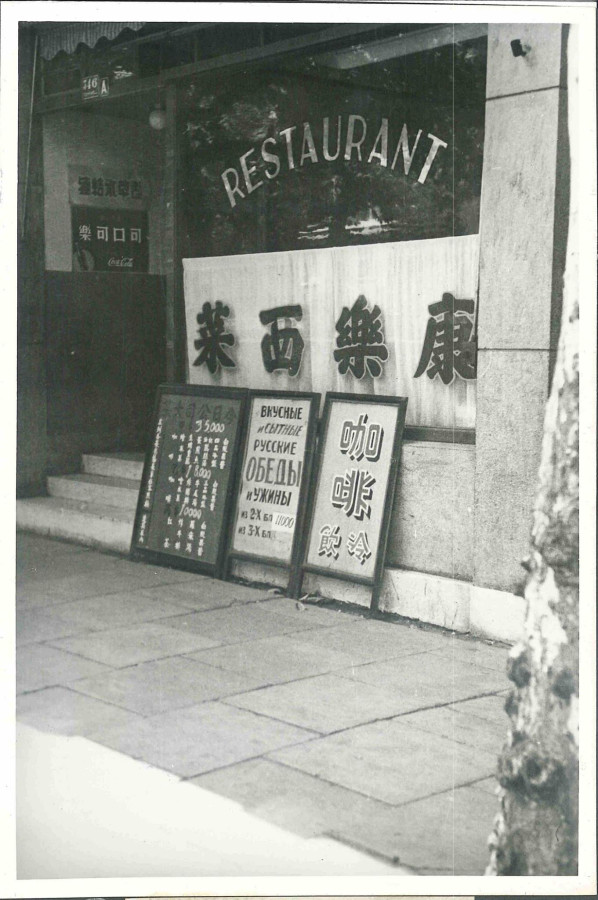 A few doors to the north, Restaurant Kong Loh at 346A Avenue du Roi Albert is offering "delicious and nutritious Russian lunches and dinners, consisting of two or three courses. 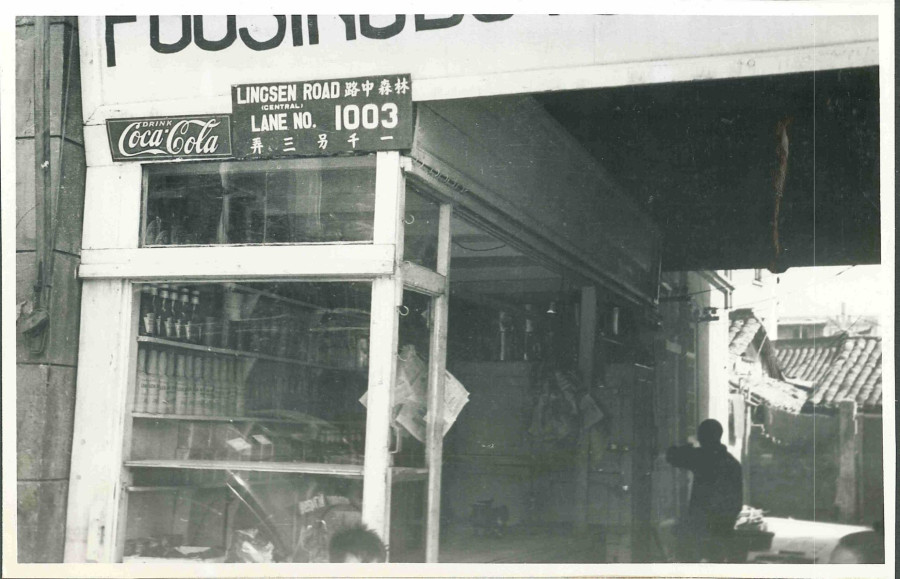 Little kiosk at the opening of Lane No. 1003 on Avenue Joffre. Inside this block many poor Russian Gypsies lived and called this place Nahalovka ("Squats"); you can see the interior of the lane a little bit. This whole block has been redeveloped. 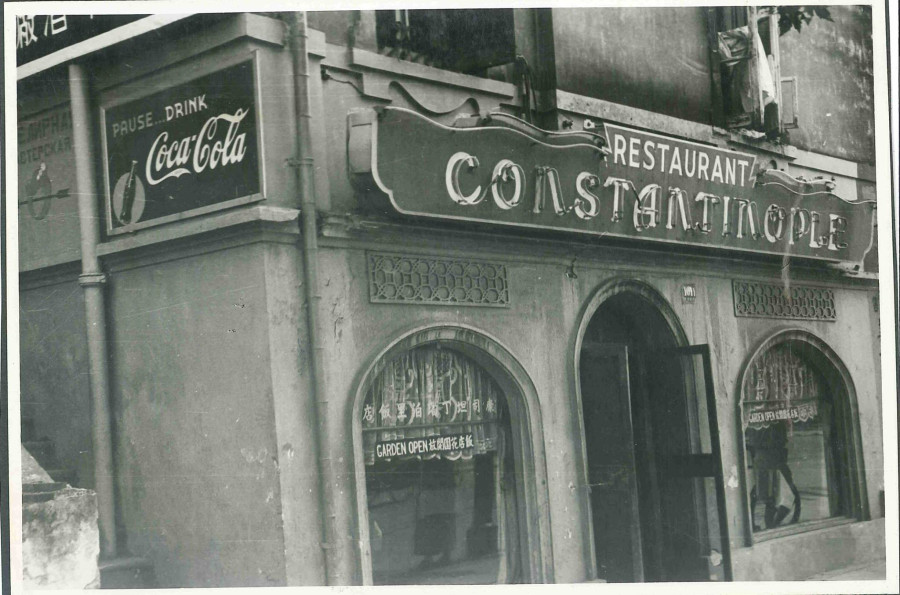 On the same block, here is the Restaurant Constantinople at 1011 Avenue Joffre. A sign for a Russian jewelry store is pointing into the alley, on the left. 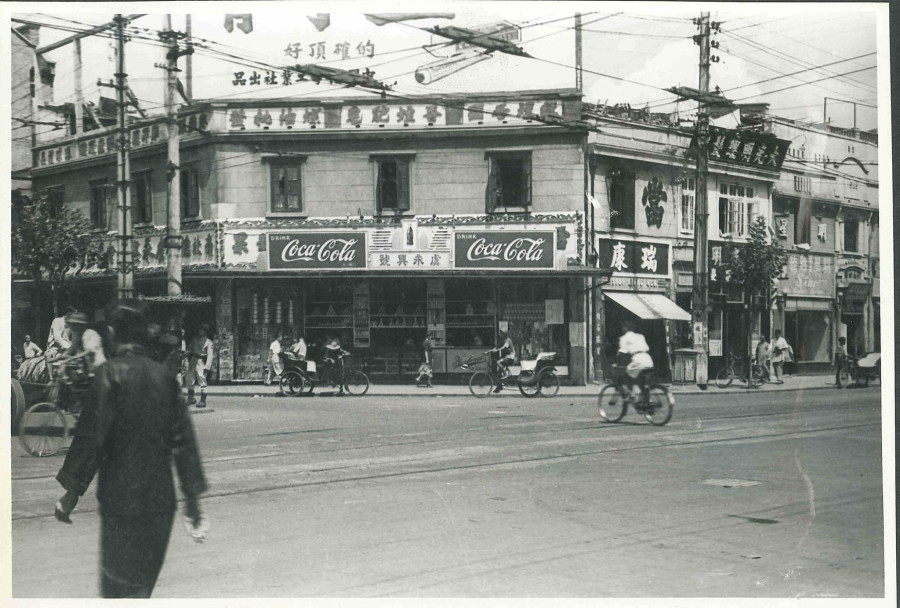 Northeastern corner of Avenue Joffre and Avenue du Roi Albert. This is where a whole series of photographs was taken by Harrison Forman in 1937. 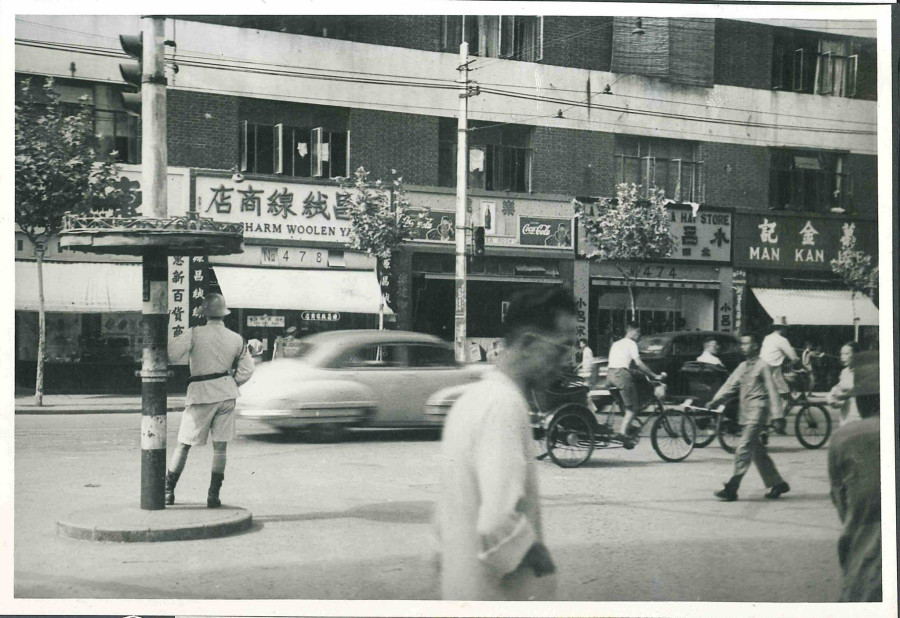 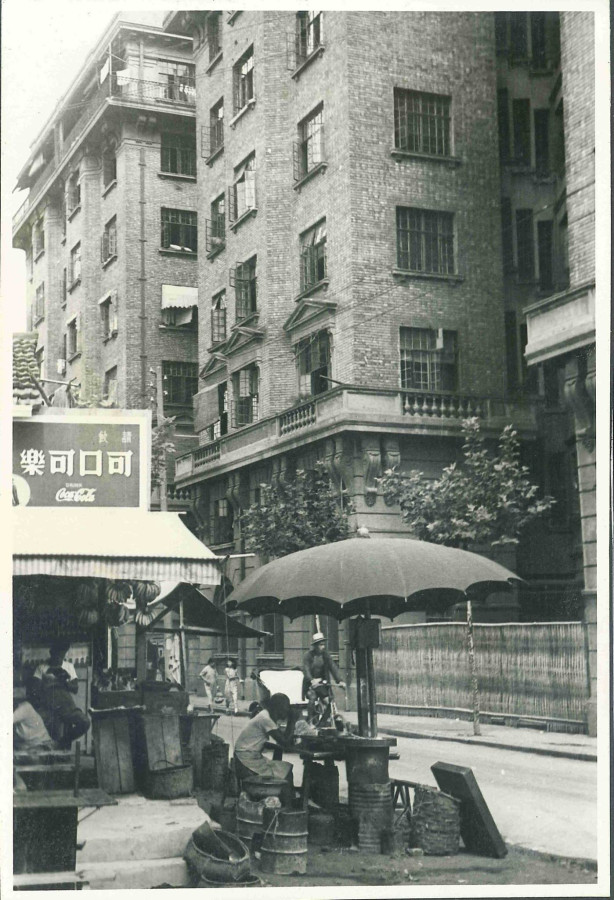 Incredibly, the newspaper stand opposite my favorite Normandie Apartments, on Route Ferguson, is still there. The thatch fence is seen blocking off one of the courtyards; now there is a metal fence there. What is the person in front, under the umbrella, selling (or mending?) 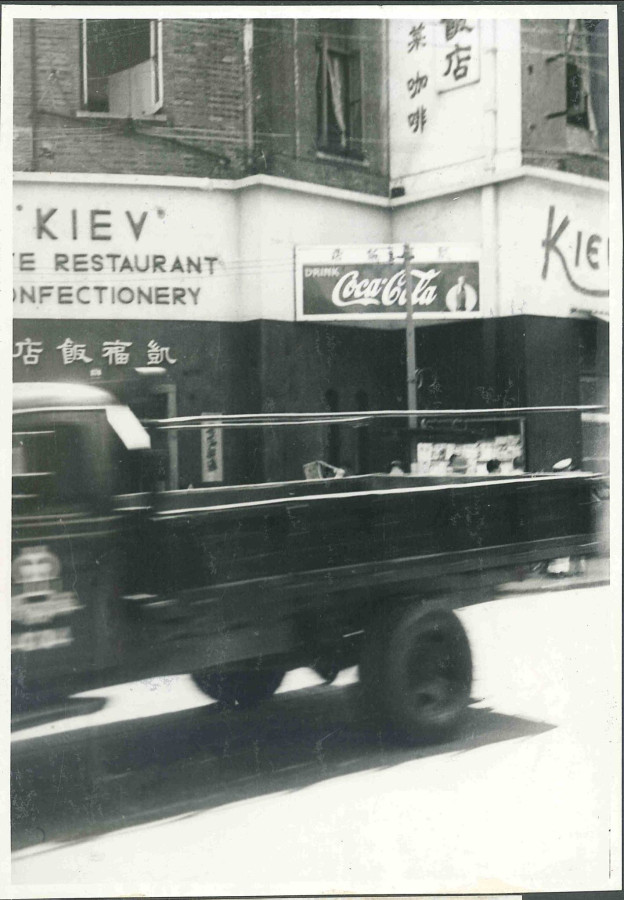 The southeast corner of Rue Mercier and Route Vallon. A touching Russian rendition of Chinese characters "Тун-Тю-Хо Бокалейная Торговля и Зеленб"; the spelling betrays a Chinese owner. Many Russians lived on this block and in the apartments seen on the right. This is the same corner, but looking in the opposite direction, toward north, along the wall of the Astrid Apartments. There is no Russian signage here, but there is a Russian lady crossing Route Vallon. Same view today: link. 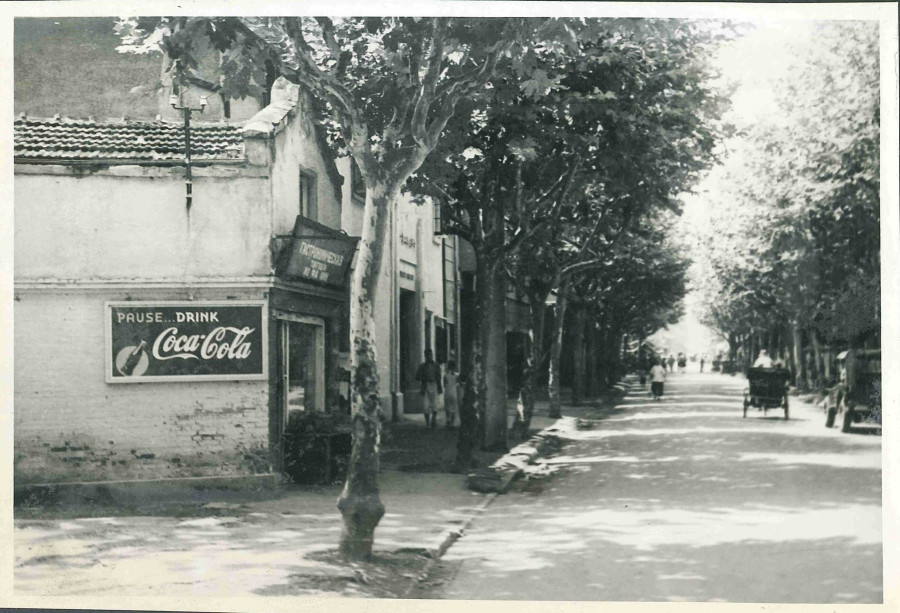 Boole & Co. 福利 at No. 876, J. Wekselman's Provision Store at No. 874 and DD's Cafe Restaurant at No. 870, in the ground floor of Majestic Apartments on Bubbling Well Road. Russian restaurant called Asia 亚洲西菜社, offering "dishes by a famous chef," tea and coffee, at 34 Rue Massenet. That stretch of the street is still there. 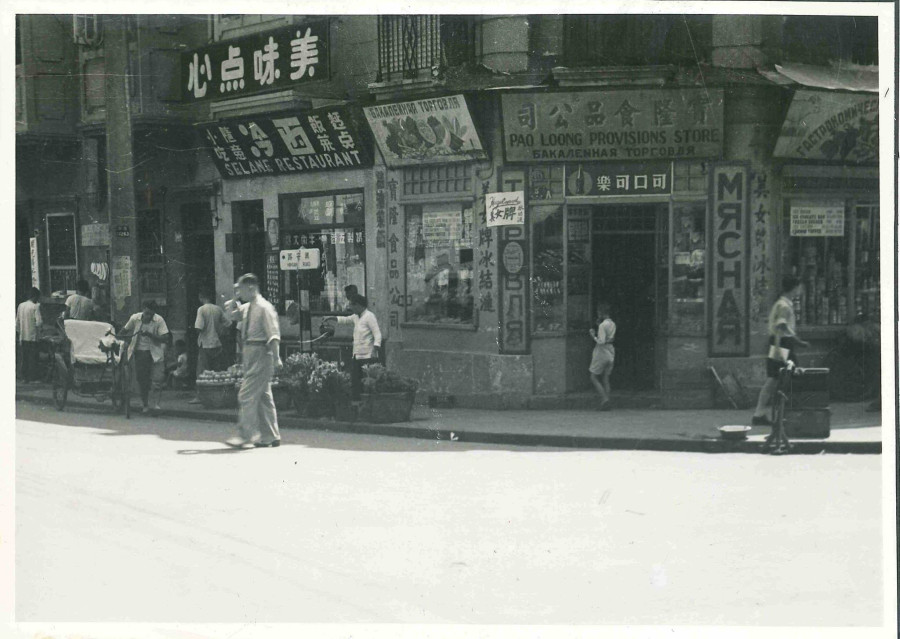 An excellent example of dense multilingual signage at the southeast corner of Route Voyron and Route Marcel Tillot. Pao Loong Provisions Store and "Бакалейная торговля", with additional "Meat trade" (Мясная торговля) written vertically on both sides of the door. To the right of it is another food store. To the left is Selane Restaurant 西泠 offering 美味点心. This corner looks like this now.