This article was originally written for the weekly architecture series in Magazeta: https://magazeta.com/2019/05/arc-russo-chinese-bank/ 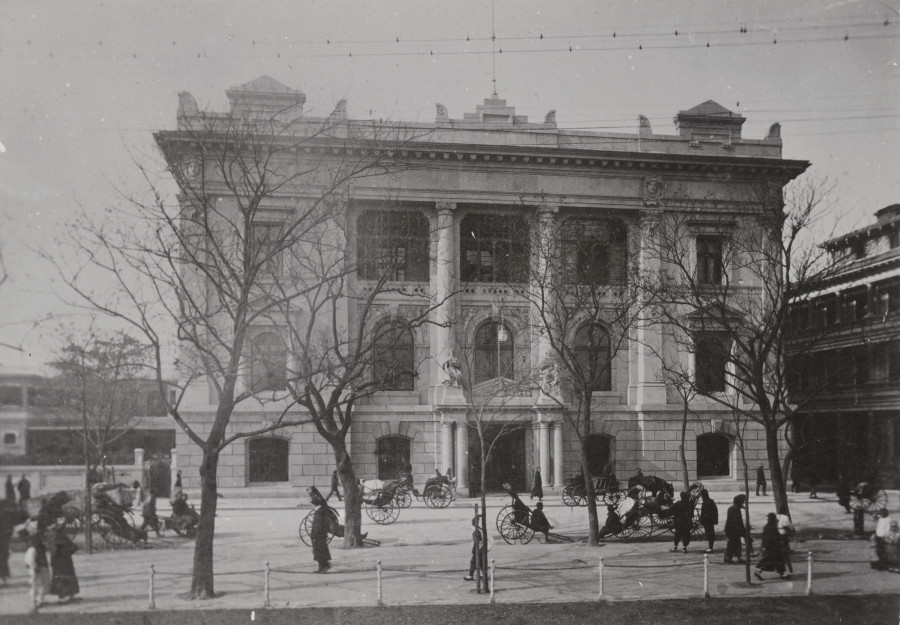 The Russo-Chinese Bank was created in December 1895, in Saint Petersburg, with the capital borrowed from French investors. Russia's Minister of Finance Sergey Witte intended to make this bank the weapon of Russian political influence in the Far East, to counteract the British dominance. Indeed, the financing of Russian projects in China allowed Russia to realize its imperial ambitions.

Early in 1896, the Russo-Chinese Bank opened its main headquarters in Shanghai. The largely French-owned bank moved into the building of the Comptoir national d'escompte de Paris, at the north end of the Bund, next to the Masonic Hall. Initially, the staff consisted of only five clerks, but soon enough the Russo-Chinese Bank was engaged in an enterprise of global importance: the financing of the construction of the East China Railway, which set in motion the economic development of the Manchurian region, the mass settlement of Russians to the north of China and the foundation of the city of Harbin.

By the turn of the twentieth century, the Russo-Chinese Bank was the second largest foreign bank in China, after the HSBC. The old building on the Bund now employed fifty European clerks, and this required a new designated headquarters, which was built in 1902 in the southern part of the Bund. The elegant building in the Italianate style was a pleasant departure from the monotonous "comprador" architecture of the era. Designed by the Prussian architect Heinrich Becker, who built the Club Concordia a little later, it was the first building in Shanghai to have indoor flush lavatories and to use glazed tile on the facade.

The arrival of the new edifice to Shanghai's waterfront was celebrated in local newspapers, which called it the handsomest building in the Far East. "It is all that a bank should be – massiveness and beauty blended," claimed Rev. C. Darwent's Guide to Shanghai. The same guide book mentioned that two carved statues on both sides of the porch – representing Industry and Commerce – were commonly mistaken for "foreign man's josses" by the Chinese. The statues were intended to visually elevate the rather low ground floor, designed this way to spare the customers the effort of climbing the steps. Steps, however, awaited them inside: the banking hall was on the second floor.

To stabilize the building in the runny soil, a raft with sand counterweight was used instead of the more customary wooden piles – which, no doubt, contributed to the sinking of the structure, which we observe today. Nowadays, you have to walk three steps down to enter the building, and the lower edge of the windows is almost flush with the pavement. The facade also had three carved figure heads – the "Chinaman" in a Manchurian headdress in the center, flanked by two mustachioed Russians in Cossack hats. The heads and the bronze statues were destroyed later, during the Cultural Revolution (1966–1977), and never restored.

At the bank's opening reception, on 27 October 1902, local financiers, diplomats and officials surveyed the lofty and luxurious interiors, clad in cool marble to provide "delightful coolness on the sultriest of summer days." The great banking hall was the most impressive: "Round the central well enclosing the grand stairway, runs a balcony in white marble, guarding spacious open corridors. Extra loftiness is obtained by carrying the ceiling of the portion of the building sheer to the roof, the upper part of the house, containing the managers' private apartments, being shut off by an arcading filled with stained glass. Just sufficient decoration is provided in basso-relief work round the corners of the exterior walls. The sculpturing symbolized iron-smelting, agriculture, coal-mining and textile manufacturers, on two sides, while the other pair have representations of tea, cotton, electricity and shipping" (NCDN, 29/10/1902). The public was also impressed with the capacitious vault equipped with an electric elevator, which replaced the coolie laborers in this sensitive area.

The Russo-Chinese Bank was making a tremendous impact on the Russian prestige in the Far East, but its achievements "sunk in the Tsushima Strait," when it had to finance the Russo-Japanese War, which ended in Russia's devastating defeat in 1905. The Russian government had to sell its share in the bank to French investors, but in order to maintain Russian control over the institution, it merged it with the North Bank in 1910, and so the Russo-Asiatic Bank was created.

The Russo-Asiatic Bank occupied the same headquarters on the Shanghai Bund. Even though the bulk of its operations was in Russia, it was considered one of the most influential financial institutions in Asia and named one of the six most important banks in the world. Unfortunately, Russian politics interfered with it again. After the Bolshevik Revolution of 1917, the Russo-Asiatic Bank was nationalized (like all other banks), its capital was confiscated and all of its 83 domestic offices were closed. For a while, foreign branches continued to operate under the management of the Paris headquarters, but in 1926, that closed as well.

The news of the closure was met with alarm in Shanghai: the bank's largest depositor was the Custom House, with over a million dollars deposited in the bank. The clients were reassured, though, when the newly formed Central Bank of China bought the Russo-Asiatic Bank's remaining assets and moved into its building on the Bund. Percy Finch has this curious bit on this transition: "The living scale was so opulent that, until the Russian Revolution of 1917, the Tsarist manager of the Russo-Asiatic Bank had his own million dollar tennis court on the Bund, the acme of real estate values. This would find a parallel if, say, the Morgans had their own squash court on Wall Street. It was still there, deserted and shabby, when the Nationalist government took over the building for the new Central Bank of China; later still the tennis court passed into the hands of the Communists."

The Central Bank of China was the financial arm of the thoroughly corrupt Kuomintang government. In 1935, the opium mafia godfather Du Yuesheng became the head of the board of directors! Granted, at that time Du was increasingly legitimate as a banker and head of the Chung Wai Bank. Yet, this appointment raised some eyebrows, and in Du's, the Minister of Finance H. H. Kung said that "although Du has a murky past, he is now a reformed character and regularly attends the church services" (Brian G. Martin, PhD thesis).

Surprisingly or not, Du proved a level-headed and wise financial administrator, which could not be said about other board members. During the Japanese occupation, in 1941, the Central Bank of China became the primary reserve bank of the puppet government and started to print money non-stop. This, naturally, led to the devaluation of the national currency, an insane inflation and a rush to buy real gold. We could say the Communists owe it to the Central Bank of China for eroding the public confidence in the existing government and pushing the desperate people into the Communists' open arms.

After 1949, the Communists used the old building on the Bund for their municipal party offices, and in 1994 the foreign exchange (中国外汇交易中心) moved into the building, becoming the first commercial enterprise to re-emerge on the Shanghai waterfront.

North end of the Bund; the building of the Russo-Chinese Bank is on the left. Image: Arthur Purnell via State Library Victoria.

The Russo-Chinese Bank in 1906–1908, offering a markedly different kind of architecture than the buildings around it. Image: Arthur Purnell. 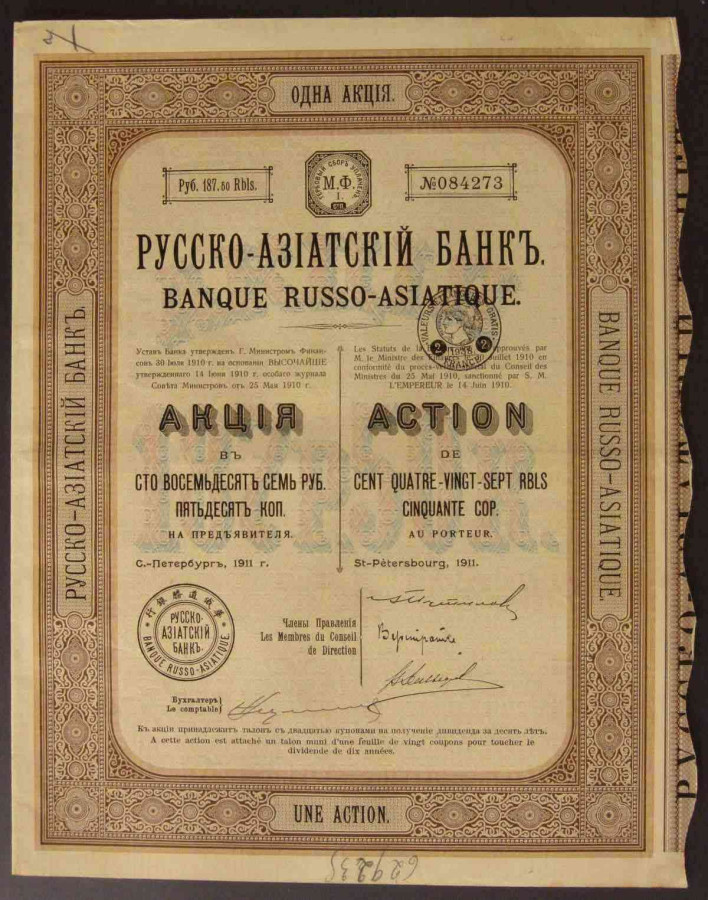 A bond of the Russo-Asiatic Bank, issued in 1911. Image: ababica.ru. 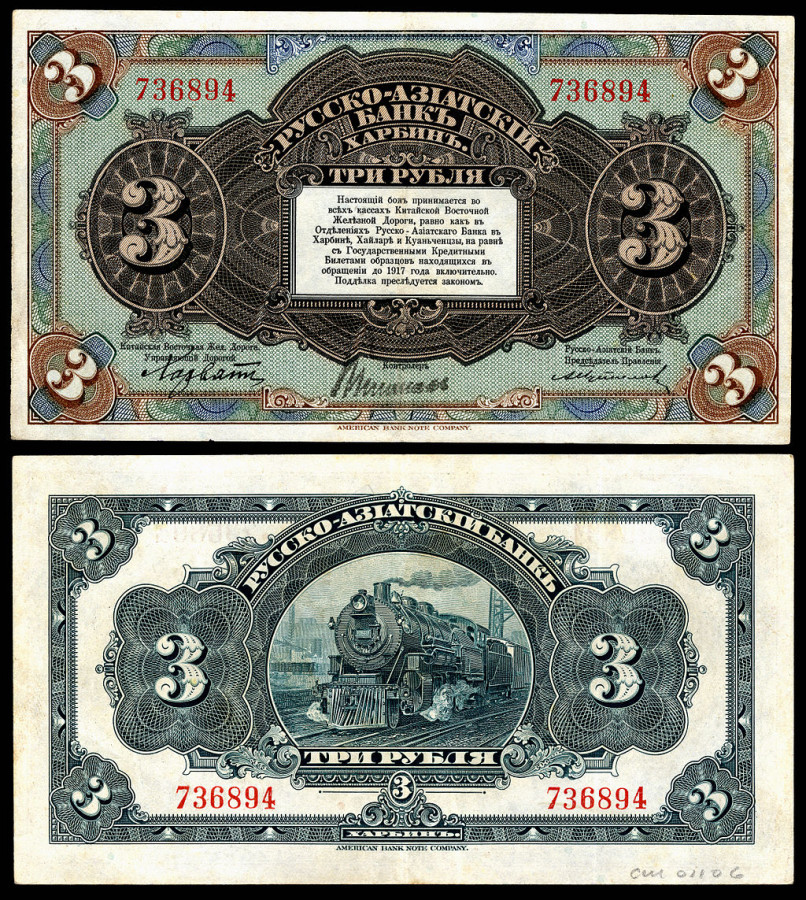 Banknote in use in the north of China, issued in 1917. Image: wikiwand.com. Entrance of the Central Bank of China in 1937. Image: Harrison Forman. 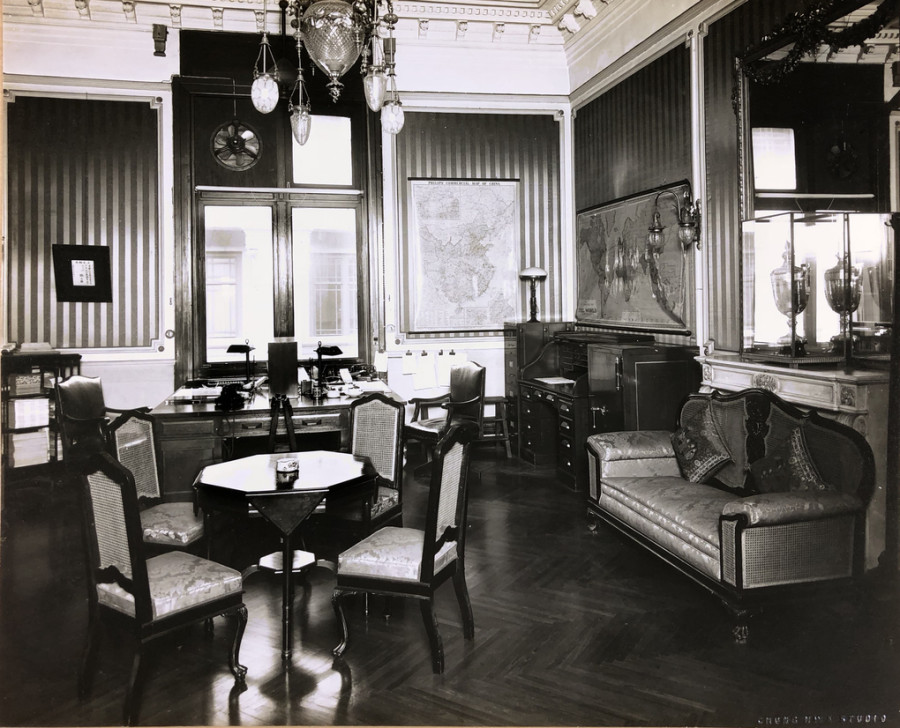 Office of the head manager of the Central Bank of China. Image: Virtual Shanghai. 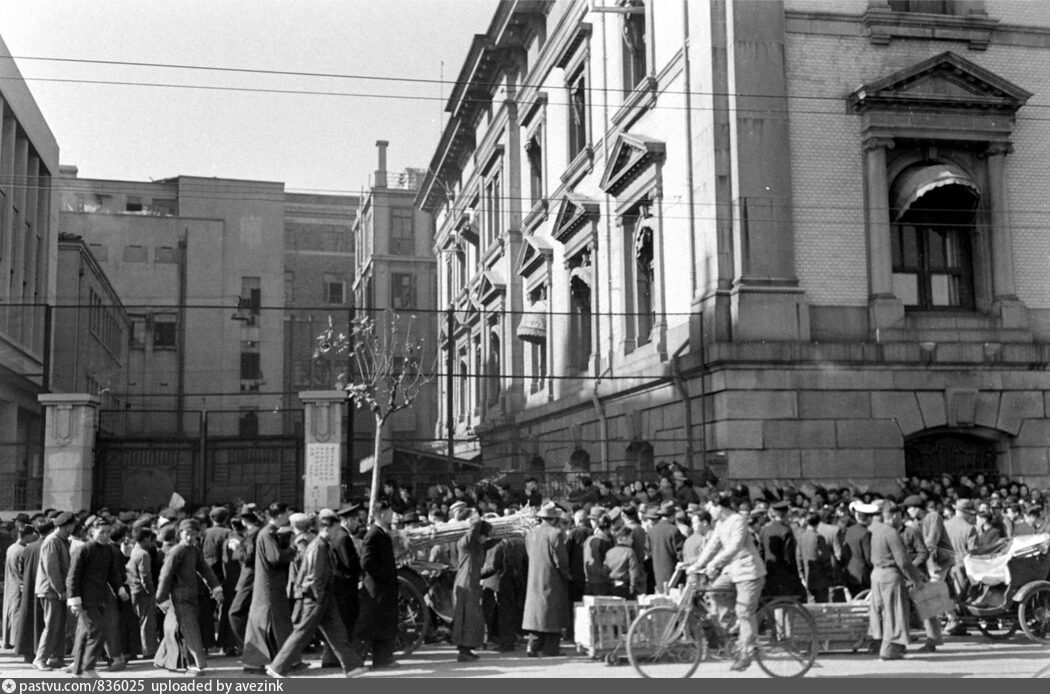 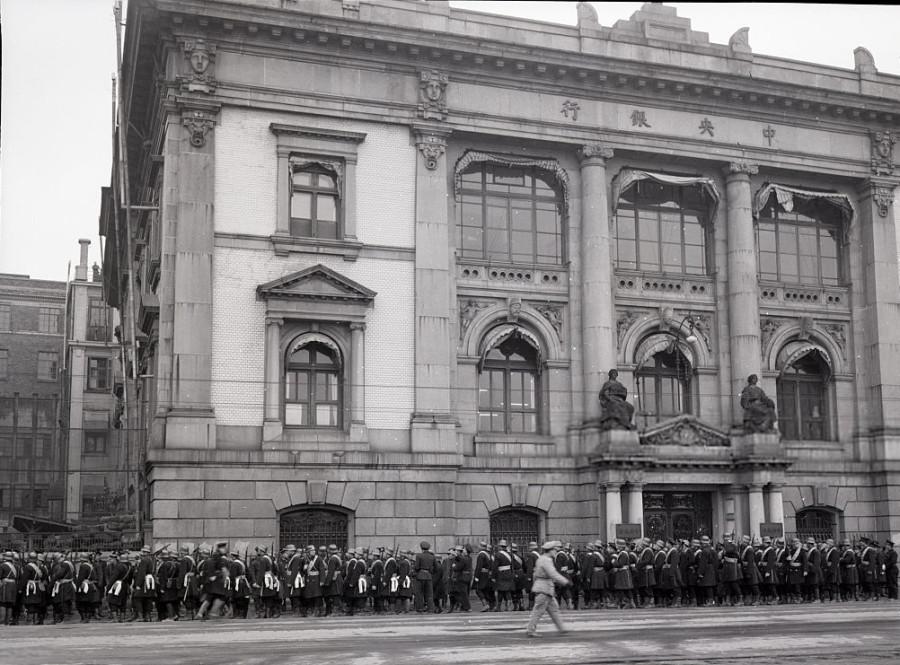 Crisis after crisis; February 1949. "Photo shows some 200 armed policemen standing guard outside the Central Bank, which is occupied by 2,000 refugees who locked themselves in after having been denied their promised allotment of cash relief. The distribution of money was halted due to confusion, when a crowd of 5,000 arrived." Image: Getty Images. 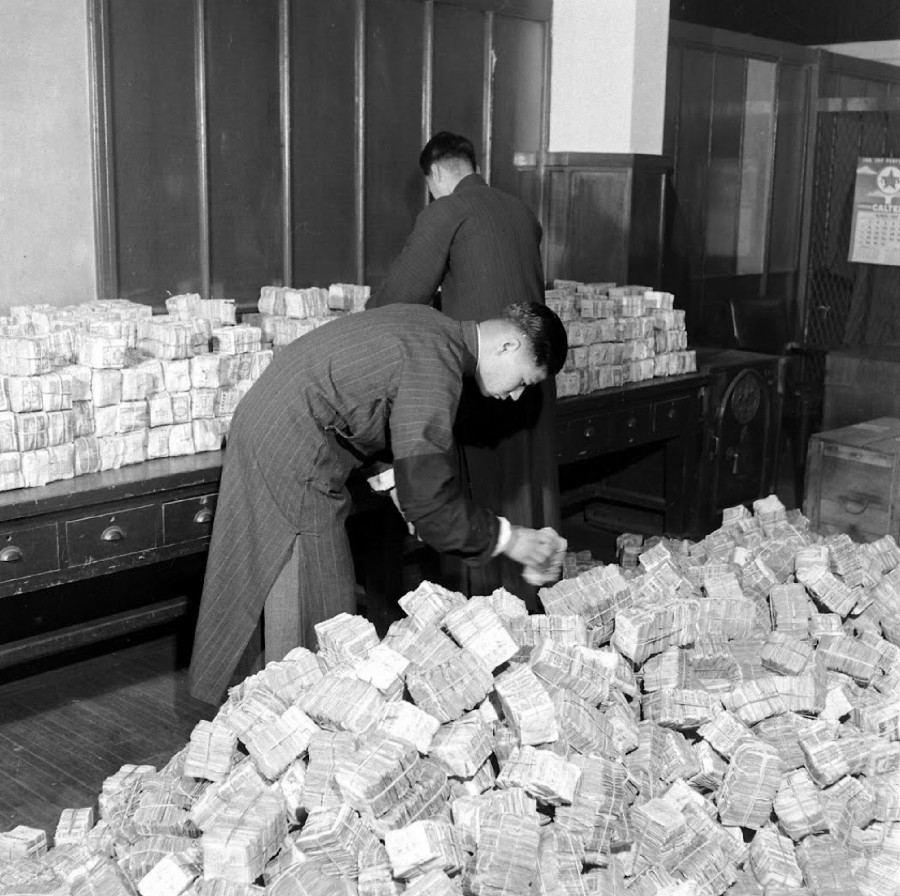 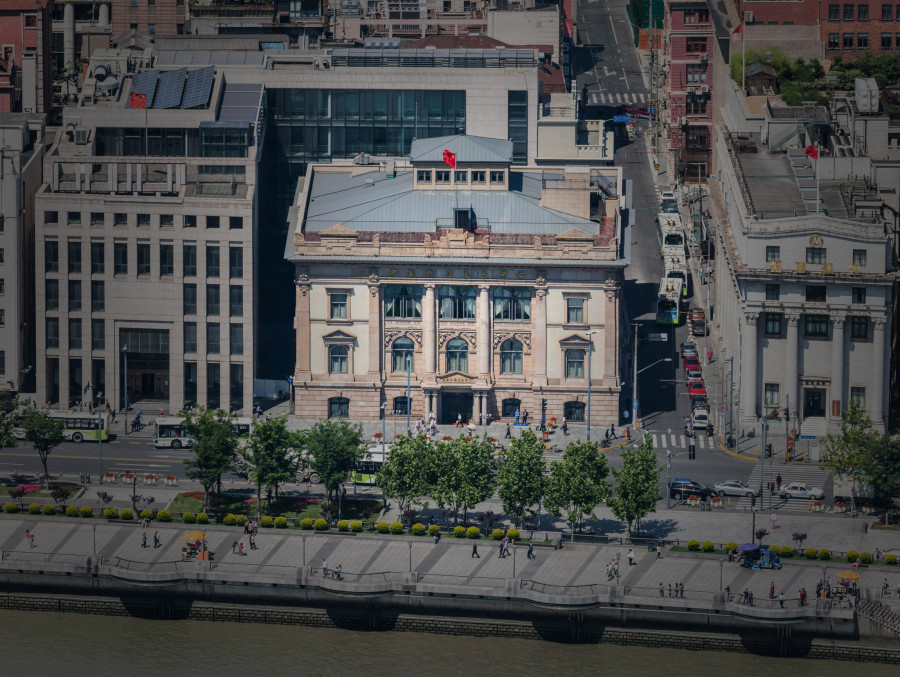 Interior of the building (the images come from the large art book on heritage architecture in the Huangpu district, I think): 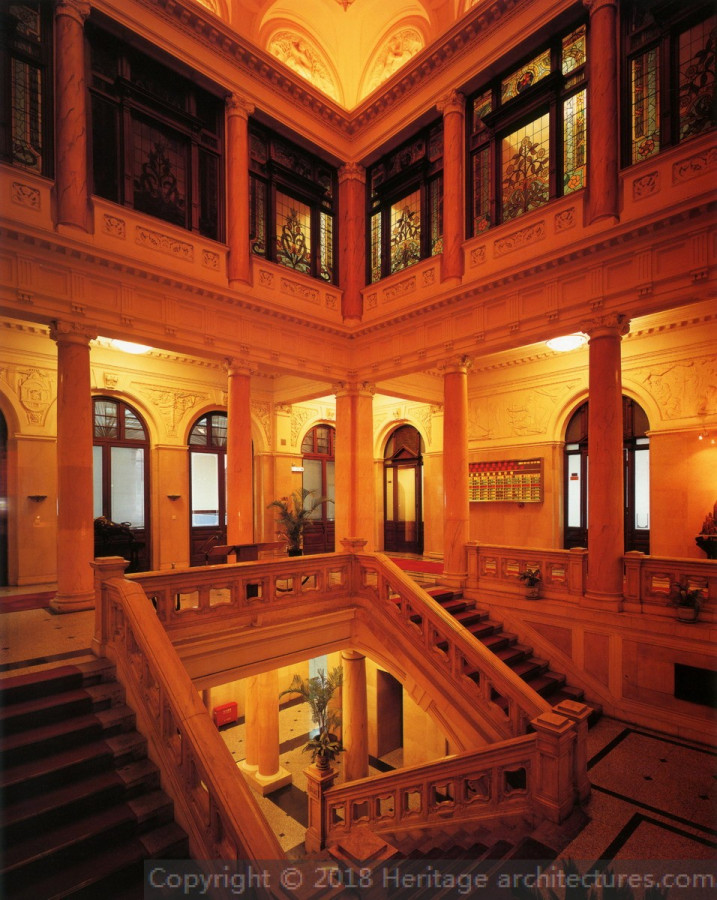 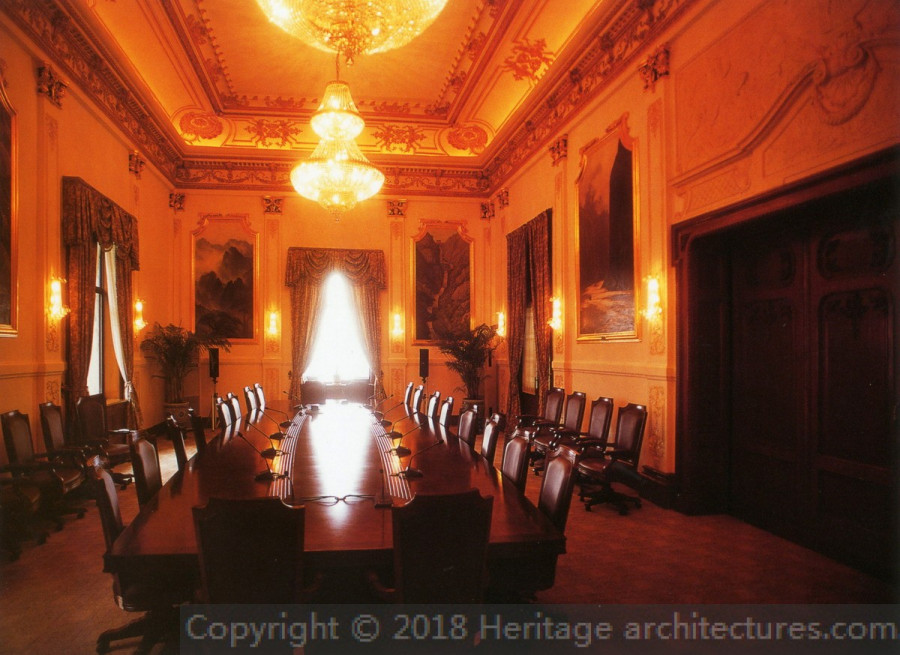 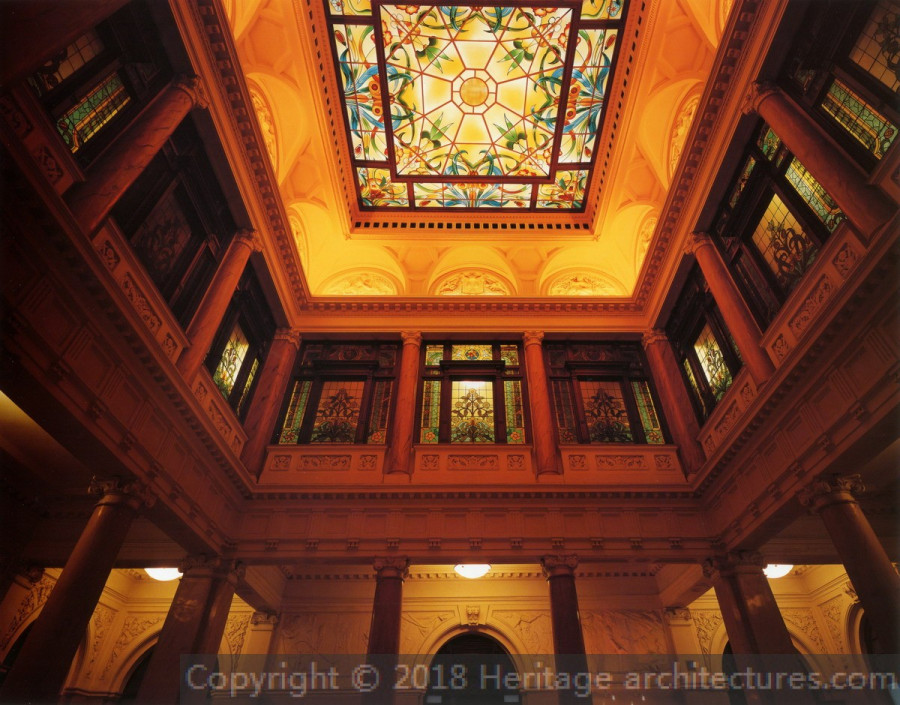