This article was originally written for the weekly architecture series in Magazeta: https://magazeta.com/2019/04/arc-book/ 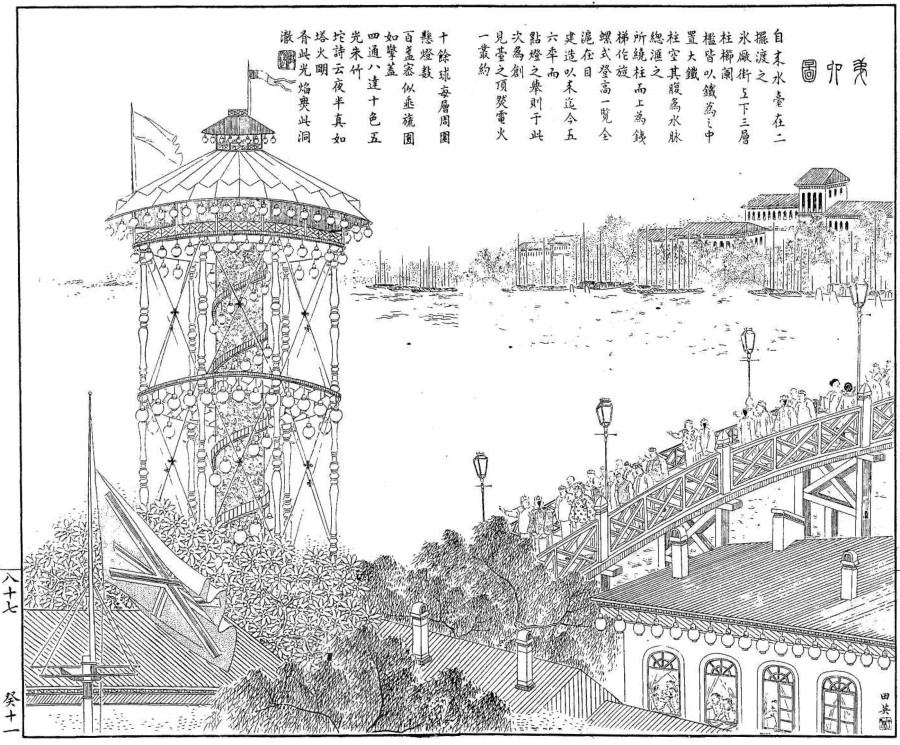 "Old Shanghai is breathing its last breath: old customs have died, old buildings razed to the ground to make way for new, even the old residents have subtly changed," lamented a newspaper article in 1924. Shanghai has always been a city of change, and some of today's heritage sites demanded the demolition of even older buildings. Today we recall three historic landmarks, once integral to Shanghai's landscape and now completely forgotten.

The most iconic postcard view of Shanghai included the bronze statue of the Victory Angel, with its head mournfully tilted, right arm outstretched toward the bend of the Bund; two forlorn-looking children crouched at the Angel's feet. The monument was constructed in 1924 in memory of the fallen soldiers, mostly British, who sailed from Shanghai to the First World War battlefields and died there. The plaque at the base of the monument contained more than 200 names.

The monument was designed by the Scottish architecture firm Stewardson & Spence; the bronze sculptures were authored by Henry C. Fehr, and the heraldic compositions and wreaths at the base of the pedestal were the work of the Russian sculptor Isabella Karsnitsky. From the moment of her arrival in Shanghai she worked for the largest design company Arts & Crafts, who trusted her also with the design of the three deities on the tower of the General Post Office.

The War Memorial served as the site for the Arimstice Day ceremonies and a starting point for parades, but on normal days traffic policemen had a hard time driving away coolies and beggars who liked to sit in the shade of the massive memorial. Also, visitors complained about the persistent smell of urine emanating from the base. To tackle these problems, temporary fences often surrounded the memorial.

In 1943, when the foreign settlements fell under the control of the Japanese occuying army, the bronze Angel of Victory and all other decorative elements of the memorial were torn down, broken to pieces and sent to a scrapyard, leaving just the empty stone pedestal on the Bund. The same happened to countless garden fences, street lamps, street clocks, grills, gates – and the memorial bust of the famous Russian poet Pushkin installed in the French Concession in 1937. The plan was to send all this scrap metal to Japan to use in weapons' manufacturing, but the Pacific War made sailing from Shanghai impossible, and the vandalized metal parts never left the city.

After the end of the occupation, in autumn 1945, the Angel of Victory was considered lost forever until a curious Russian girl Anna Boormistroff embarked on a search for the bust of Pushkin. She rummaged in the contents of a dumping ground on the corner of East Broadway, and although the poet's bust was nowhere to be seen, she found pieces of the bronze angel. The British society rejoiced, media praised Anna, and the bits of the Angel were transported to the British Consulate. (See this post for more photographs of the Victory Angel and the full story of Anna's discovery.)

The plans to restore the War Memorial never came to fruition: the settlements were no longer foreign territory, a civil war was raging in China, and the reappearance of a foreign memorial to foreign victims of a long-forgotten European war would seem strange, to say the least. 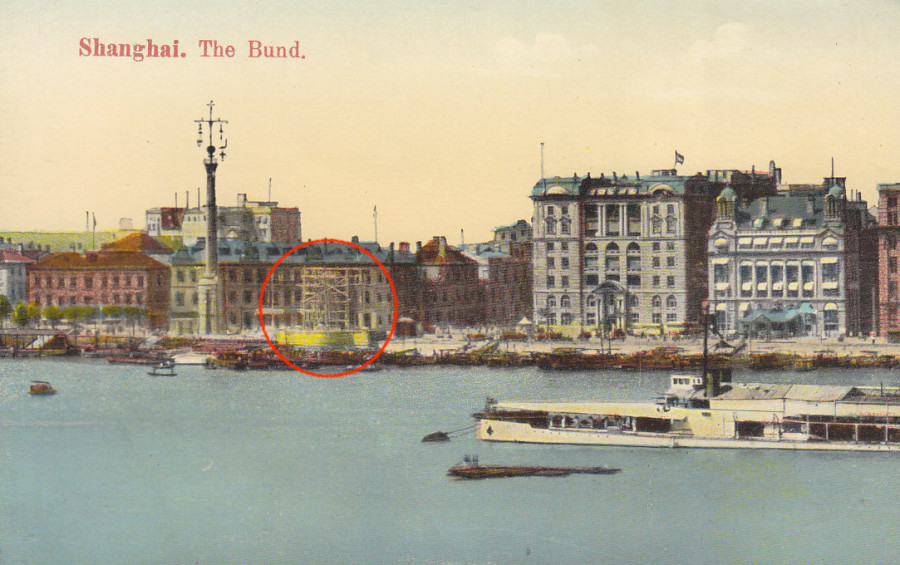 Waterfront in 1923; the scaffolding over the future War Memorial is circled. Image: delcampe.net. 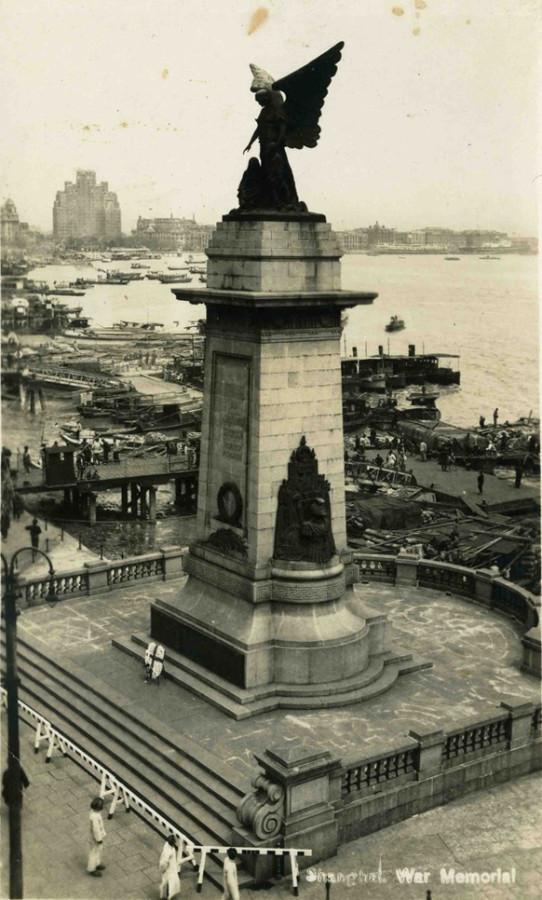 The War Memorial fenced off against loitering and vandalism. Image: Virtual Shanghai. 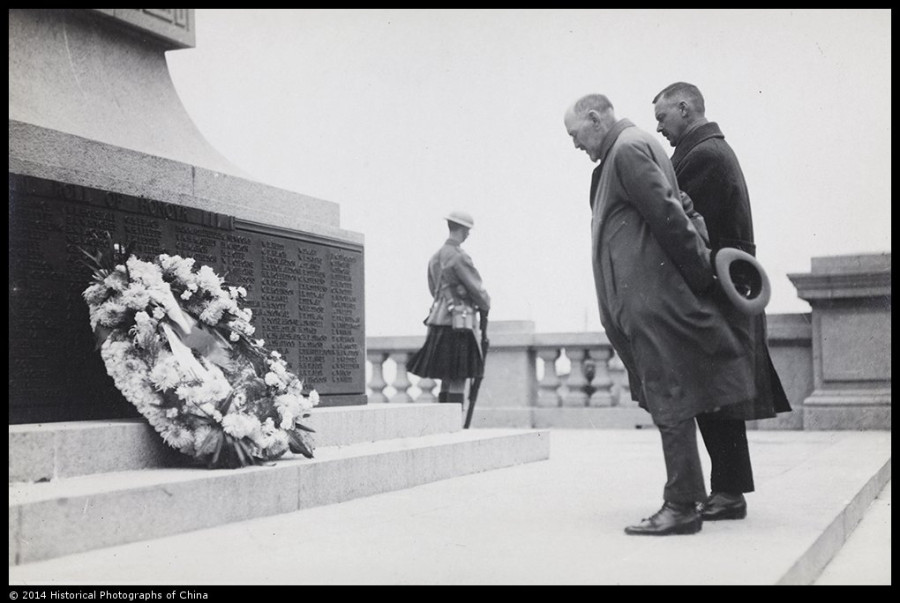 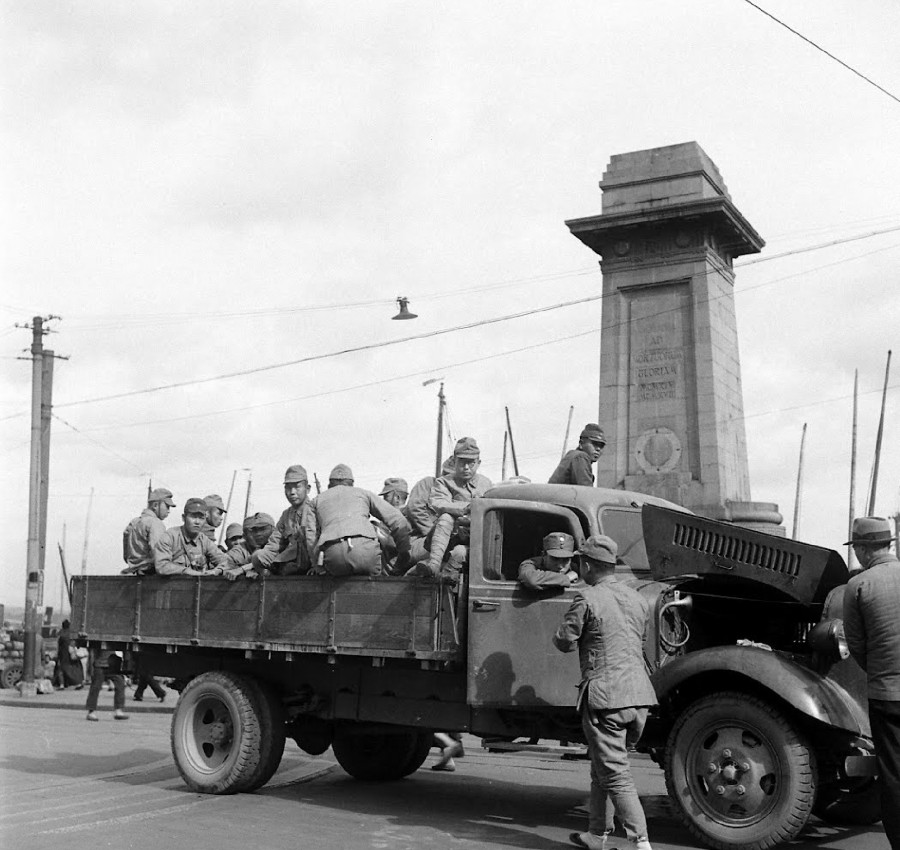 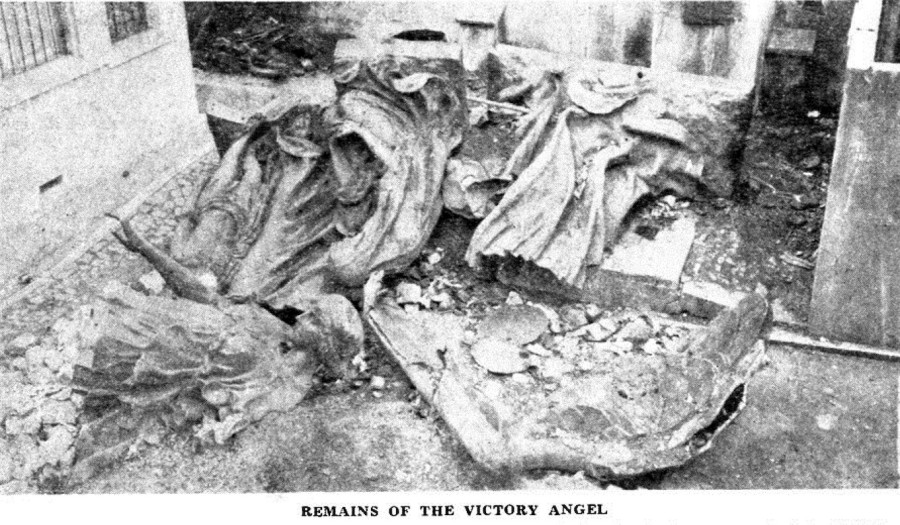 Remains of the Victory Angel in the British Consulate in 1947. Image: NCDN, January 1947. 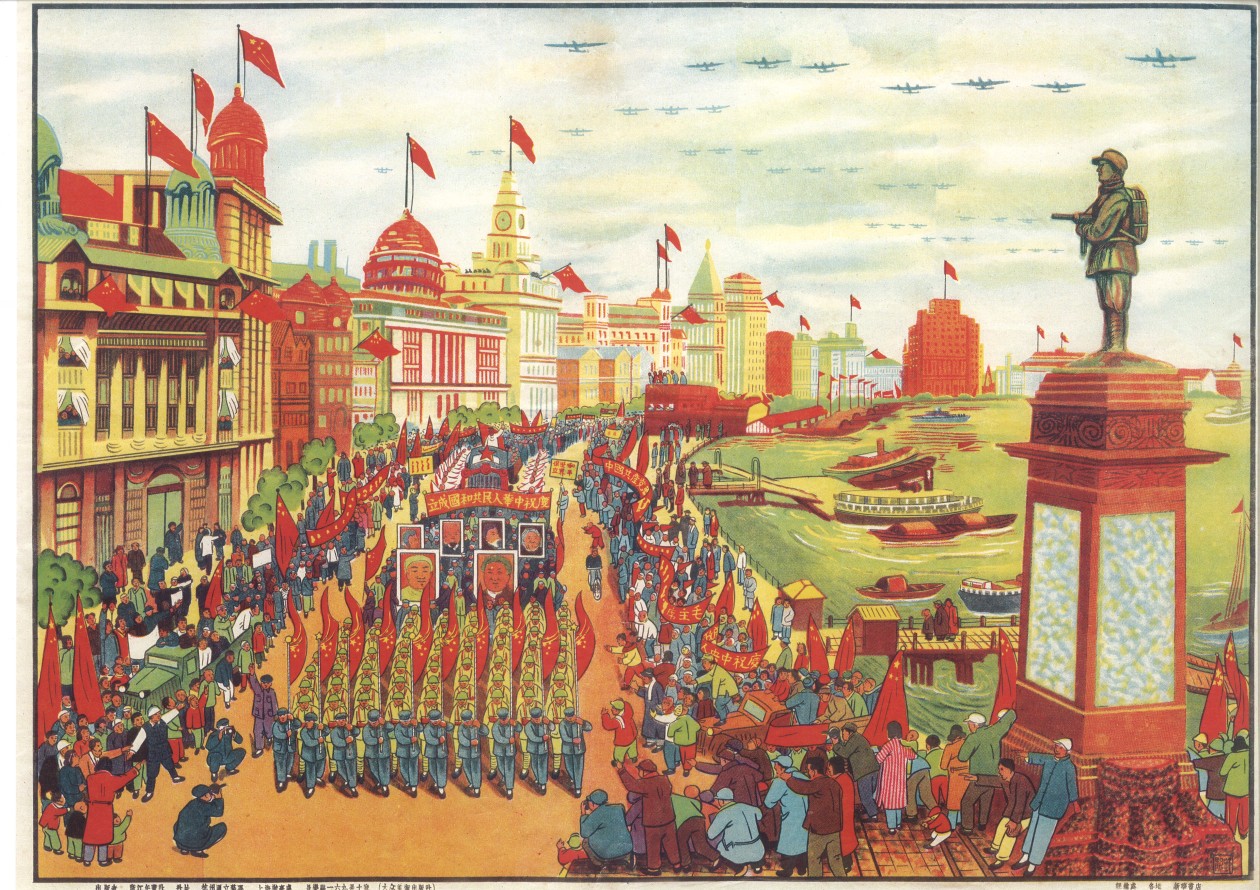 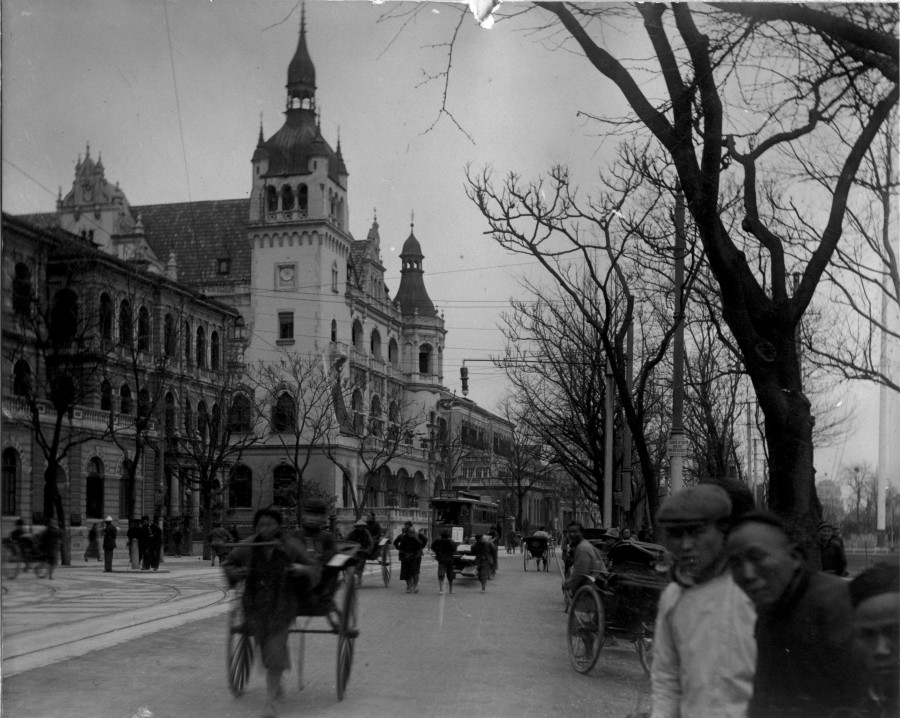 Germans were well represented in foreign Shanghai at the turn of the 20th century and outnumbered only by the British. By 1910 every sixth foreign company was Prussian. Already in 1900, the growing community began to raise funds and discuss designs of a prospective clubhouse, modeled after the British Shanghai Club, which would be "the largest and the finest" in Shanghai.

The lot in the center of the Bund was purchased from the English firm Shaw, Ripley & Co., and in October 1904 the Prussian prince Adalbert presided over the laying of the cornerstone of the future German Club. The only concern was that the southern facade of the club would be overshadowed by the new "palatial" building of the Russo-Chinese Bank. However, the architect Heinrich Becker, who designed both buildings, ensured the stylistic superiority of the German Club. For many years, Concordia was the most beautiful building on the Bund. Reinforced cement was used in its construction – for the first time in Shanghai.

For maximum effect, the building was kept under scaffolding until the last day. On the opening night, 6 February 1906, even the Shanghai Club was empty of visitors: everyone went to see the opening of Concordia. The elaborate roofline and turrets made the building like a Prussian castle, but to see real luxury one had to go in and be greeted by a huge bust of Kaiser Wilhelm II. Painted views of Berlin adorned the walls, and coffered ceilings had solid beams carved with German folk wisdoms in Gothic blackletter. The dining room offered a panoramic view of the Huangpu River through stained glass windows with pastoral landscape scenes and coats of arms from Prussian provinces.

In spite of its nationalist-flavored interiors, the German Club's agenda was light and entertaining. Soon enough Concordia earned the reputation of being the best place for masked balls and yearly bowling competitions. In 1915, however, when the First World War broke out in Europe, the attitude toward Germans in Shanghai forced many of them to leave. Some went to fight in the war, others had to close down businesses, and everyone felt the change in the public attitude. When in August 1917 China at last joined the Entente and declared war on Germany, both German newspapers were forced to close and the doors of the Concordia Club were sealed. There was some deliberation in the English press as to what the building should be used for, but everyone admitted the club now belonged to the Chinese. Eventually, the building was passed down to the Bank of China, which had it demolished in 1935 to make way for a skyscraper. 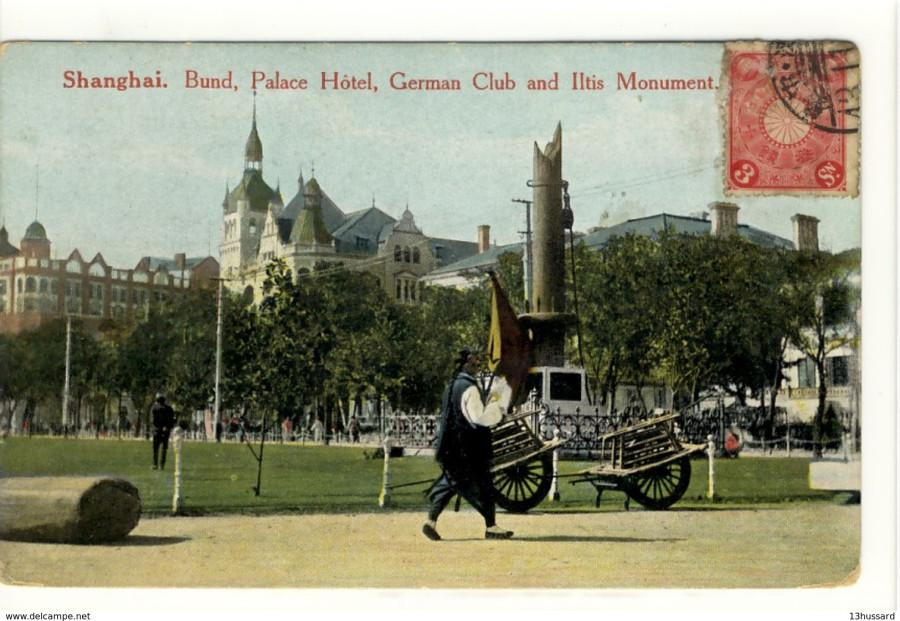 Prussian public at the ceremony of the laying of the foundation, in 1904. Image: Historical Photographs of China, University of Bristol. 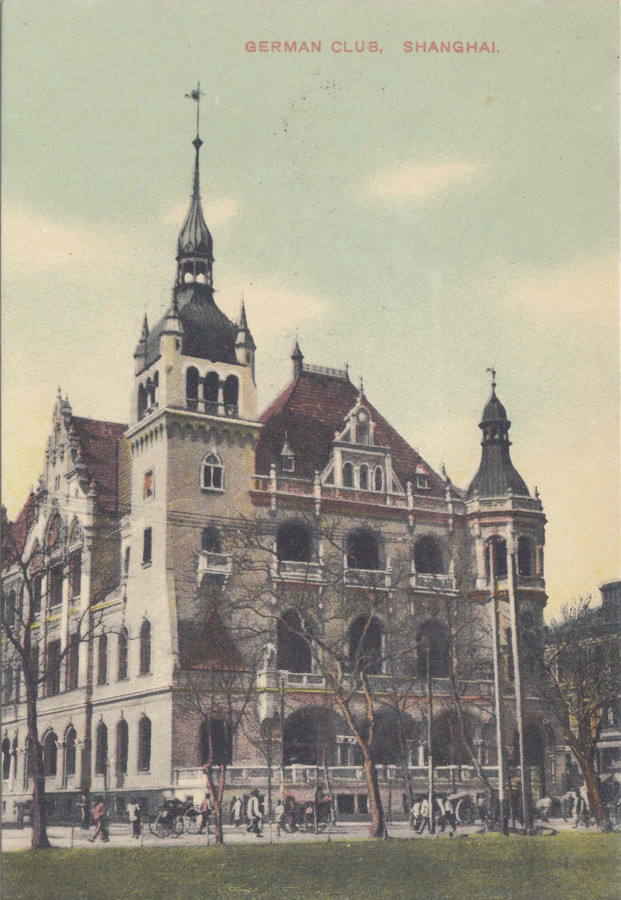 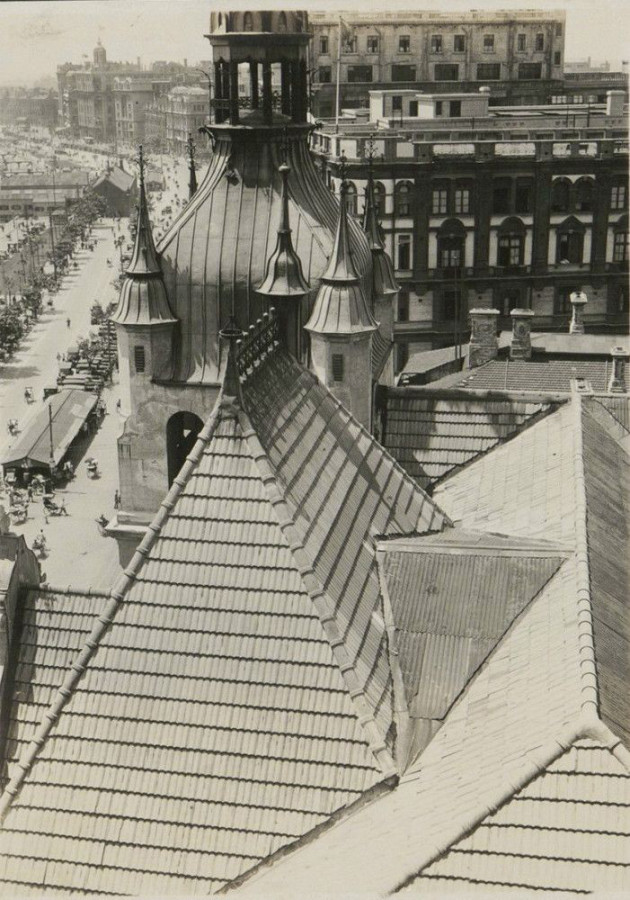 On the roof of Concordia in 1926, looking toward the Palace Hotel. Image: Japanese photographers collection at tuyouhuaxia. 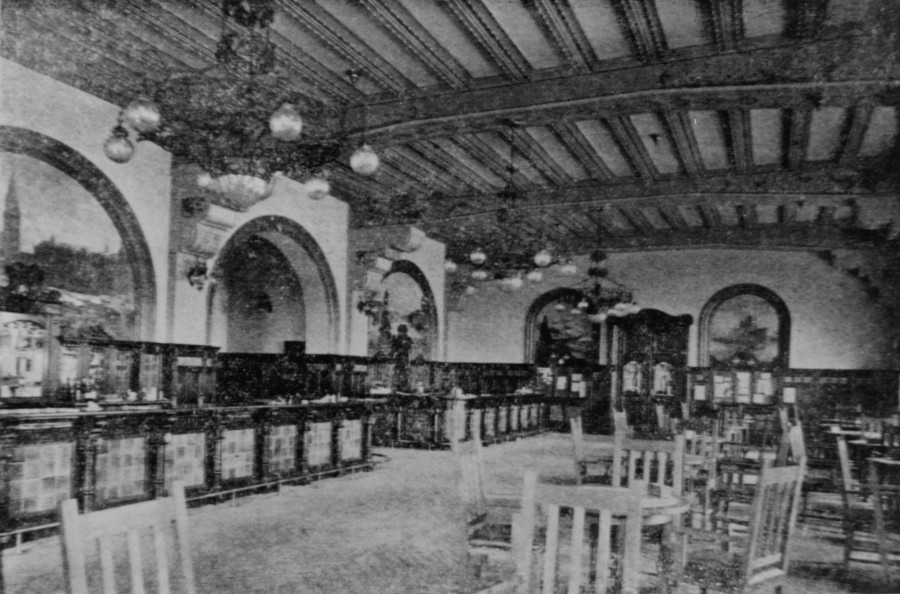 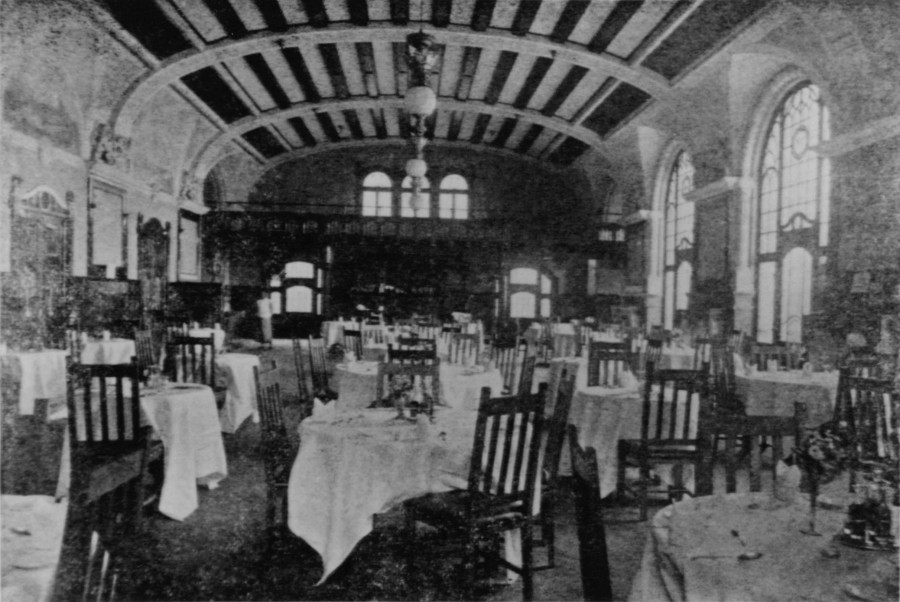 Interior of the club. Image: minguotupian.com. 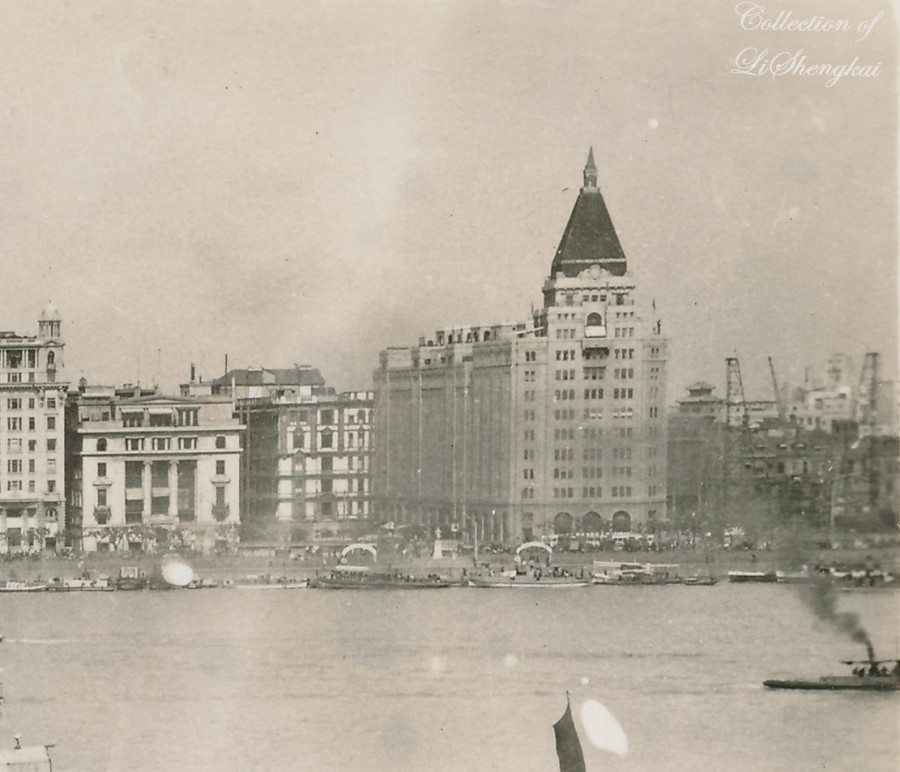 The dismantling of Concordia (to the right of the Sassoon House) to make space for the new Bank of China. Image: flickr Fin de Siecle. Collection of Li Shengkai 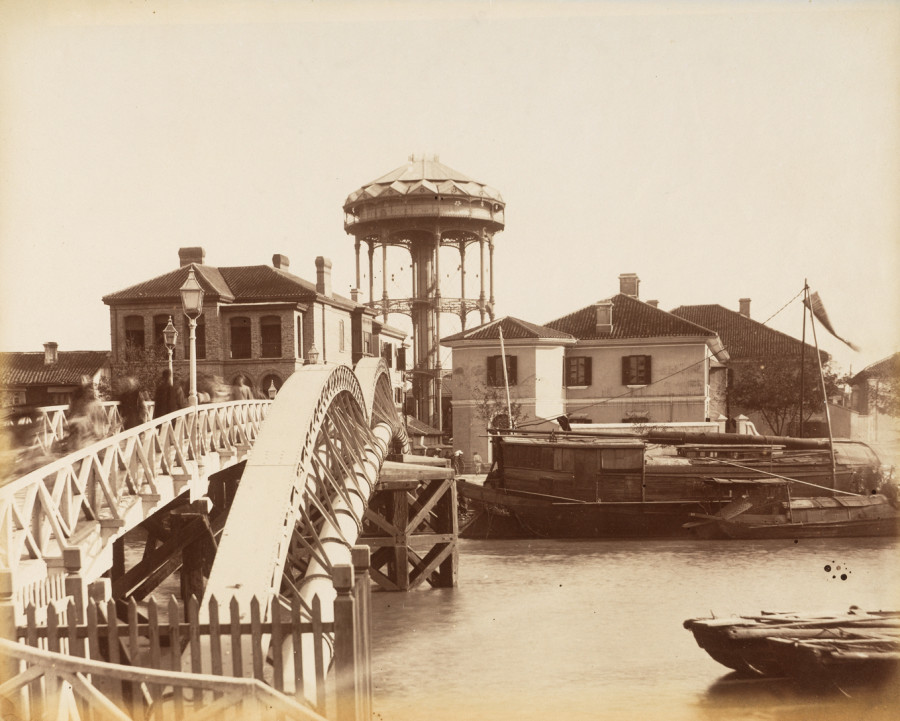 Before piped water came to Shanghai, Chinese and foreign population had to choose between brackish well water or muddy water from the Huangpu, which had to be purified with alum to remove sediment. Cholera outbreaks were frequent; disentery was considered a feature of the subtropical climate. But in 1880 the English firm Drysdale, Ringer & Co. started to build a system of underground piping, and in April 1883 the Kiangse Road Water Station started ins operation. It supplied fresh water to all of the International Settlement.

The water tower, 30 meters high, maintained pressure in the pipes and served to store water in case of a massive fire. The intricate wrought-iron construction was easy to see from any part of Shanghai. Around the same time, in 1882, electricity network came to Shanghai and gas street lamps were replaced with electric ones. To celebrate the Golden Jubilee of Queen Victoria in 1887, the water tower was decorated with electric lights, and this fantastic and progressive sight – two-in-one – was reproduced as an illustration in the Dianshizhai Pictorial (see the top image in this post). This nod toward progress did little to reassure the Chinese population, many of whom continued to distrust tap water from suspicious underground pipes. There were rumours of drowned bodies floating inside the water tank up above.

Even thirty years after its launch, the Kiangse Road Wateworks continued to operate impeccably. In the middle of the 1920s, when London tap water was the benchmark for quality, Shanghai water even surpassed it in purity. The secret was not so much in technology – the waterworks used traditional sand filtering – but the source. Contrary to the worldwide custom to draw water upstream from the city, Shanghai's water was drawn downstream, at the mouth of the Huangpu, where mighty Yangtze pushed its presumably clean water up the Huangpu. "In China, everything is upside down," remarked the papers. For comparison, Chapei Waterworks, which drew water from the Suzhou Creek, ended up with "liquid dirt" full of cholera germs coming from the tap.

By the 1930s, the Shanghai Waterworks had expanded, and there was a giant modern waterworks in Yangtzepoo. Journalists now looked at the old water tower with disdain, calling it "an eyesore on the changing skyline of Shanghai" and likening it to the "buzzard's nest on top of a travelling crane." In 1932, modernist lines were in vogue, and Victorian flourishes must have seemed especially revolting. In spite of this ostracism, the tower quietly survived the age of art-deco, the Japanese occupation and the Liberation, and was pulled down in 1954. Now there is a garage and an office on that corner. Only the Waterwarks Administration building, built in 1888, survives in a much changed form, at 464–464 Middle Jiangxi Road. 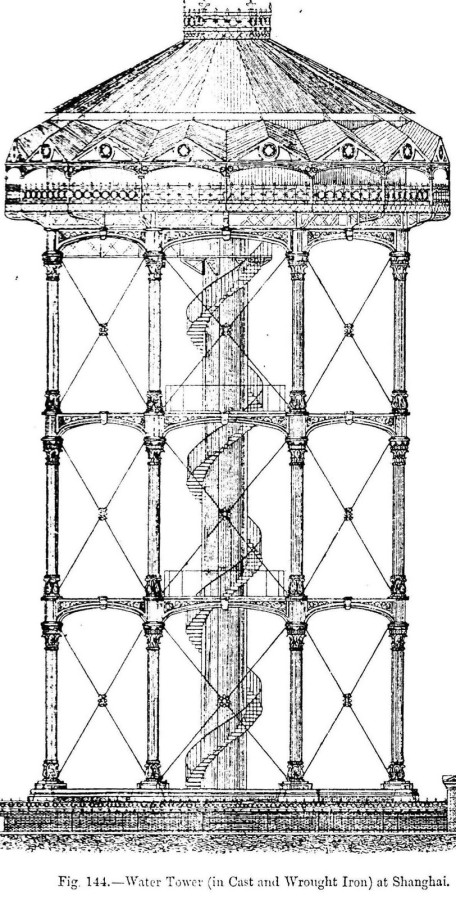 Drawing of the Water Tower found by the British Watertower Appreciation Society. 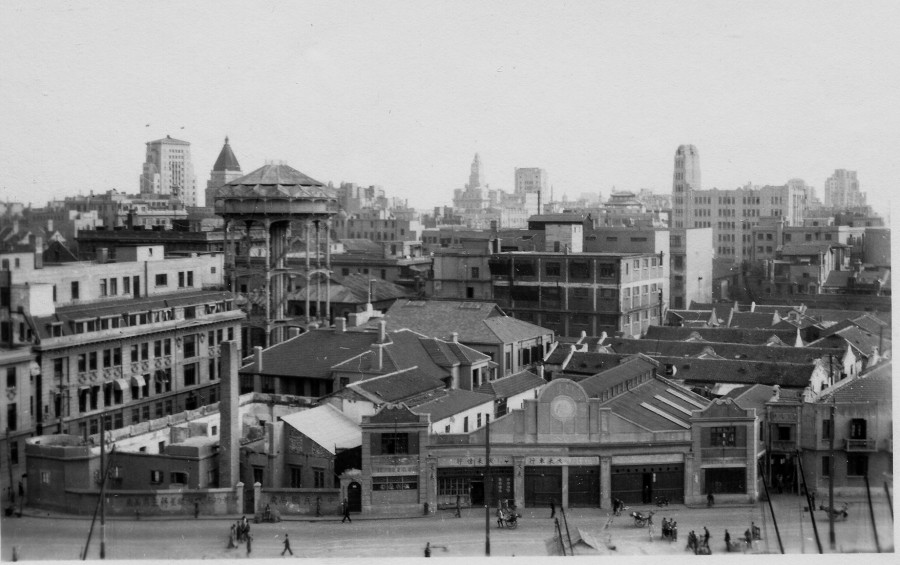 Was the Kiangse Road Water Tower (left) really such a blight on "Shanghai's changing skyline"? I'd rather say Bank of China was. Photo taken in the 1940s from the Embankment Building on the north side of Suzhou Creek. Image: flickr Cities in Old Days. 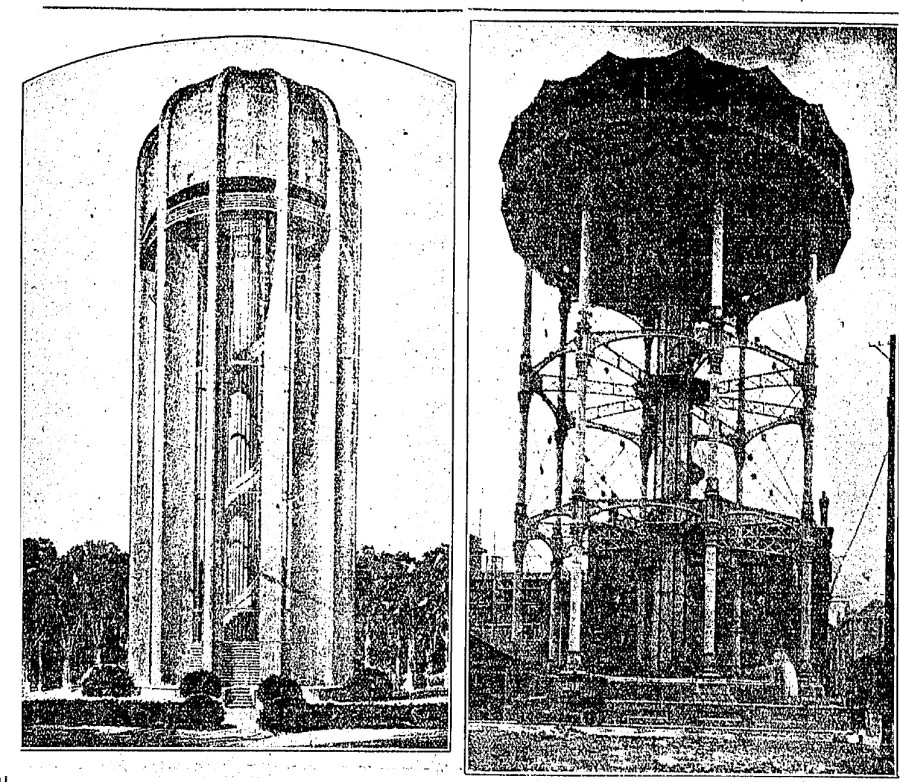 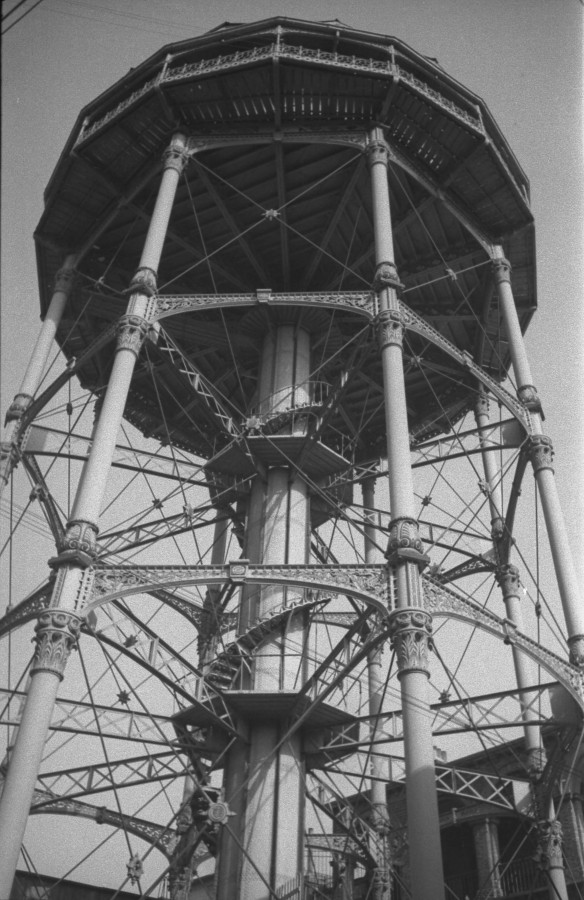