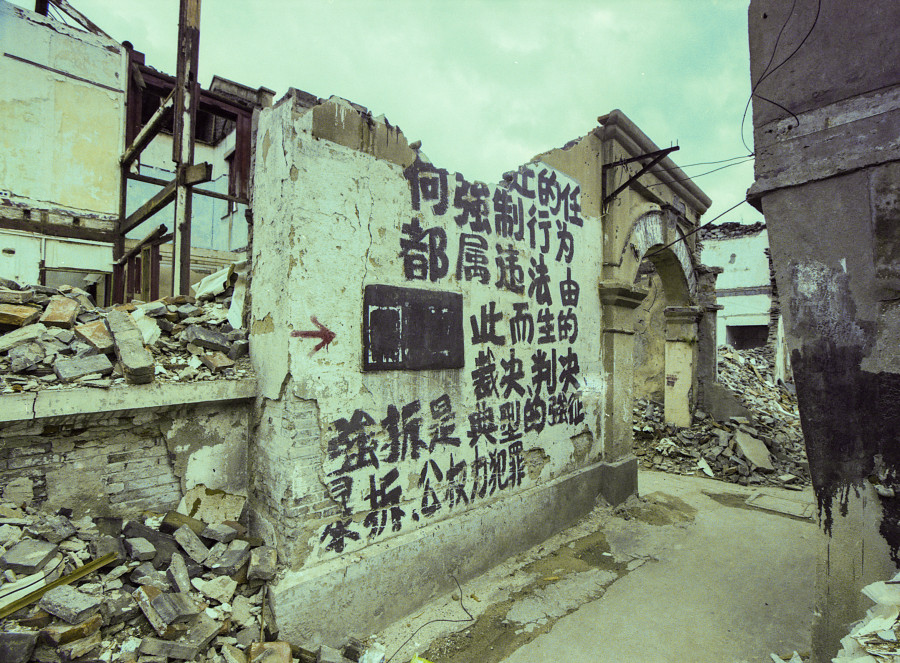 Protest graffiti on the ruins of a wall in Dongjiadu 董家渡, 2011.

Here is a little Q&A I did for a graduate student of interior design working on the adaptation and reuse of a recently vacated shikumen neighborhood.

Are you informed about any plan for this neighborhood's future?

I am not informed about that, but I have not been focusing on this area as much as other scholars. In general, in China, there is no transparency in redevelopment schemes. Details of projects, names of stakeholders, demolition and construction timelines are purposefully obscured, to frustrate resistance and improve the bargaining position of the developers.

Why lately there have been a deep research and several design proposals in similar Chinese contexts (i.e. Hutong in Beijing, ShuiWei in Shenzen) but not for Shanghainese Lilong?

I would not say Shanghai is overlooked; quite the opposite, it is constantly on the radar of designers, architects and artists.

What do you think is essential to create a sense of community and belonging in the Chinese culture?

As much as we would like, I do not think we have the power to create these qualities. Sense of community and belonging tend to appear and come to bloom in sustainable, stable communities. When you look for the expressions of these qualities in spatial domain, you will find they are generally present in in old, established neighbourhoods, with varied architecture, amid small-grain city fabric, with human-scale infrastructure.

Which are some spatial solutions that you think must be preserved in Lilong, and in SiwenLi in particular, to create a sense of community?

Such approach, once again, suggests a plan to pick apart a lilong, reduce it to some kind of basic structure and to salvage its valuable features. It is predatory thinking in principle. I want the question to be “how not to destroy the sense of community that already exists in lilongs.” And the answer is, of course, to simply let them be. The problem of overcrowding and improved amenities is fantastically simple – it only requires municipal spending. But Shanghai – the richest city in China – would not invest in housing improvements for low-income citizens unless it involves dispossessing them of their homes and cutting them off from the future of their city.

How do you think that the past of this particular neighborhood – and the Lilong’s culture in general – should be passed down to the new generation that is going to use this space?

The word “should” is prescriptive and implies deliberate actions. The passing down of urban culture will happen naturally, without our scheming, if the spaces and communities where this culture lives are preserved. In the case of this particular neighborhood, already voided of its citizens and reduced to empty shells of houses, none of its onetime culture will be passed down anymore; it has been conclusively extinguished.

Which could be the main challenges in readapting these kind of spaces for the new generation?

Lilongs are primarily the places of living, people’s residences, family homes. I believe we should be careful not to barge into someone’s rightful territory with a plan to “adapt” and “readapt” it. How would you feel about someone eyeing your residence and making plans to repurpose it, supposedly for a new generation? When looking at China and working with Chinese cities, we tend to hold people’s property and residency rights in much lower regard than we would in Europe.

The main problems with lilongs as places of living are their decrepit state, overcrowding and absence of amenities. But like I mentioned above, this is resolved with municipal investment and optional, case-by-case resettlement schemes, like the ones undertaken in the 1990s in select lilong neighbourhoods in the old town. In principle, old housing stock in the city is not an obstacle to “progress” – even though this is what the Chinese authorities and media want you to believe. It is enough to look at any European city to realize this.

Which kind of new functions do you image for this particular neighborhood now that is abandoned?

This hardly matters. It is a tragedy to see a large residential community destroyed, and I do not wish to dance on its grave.