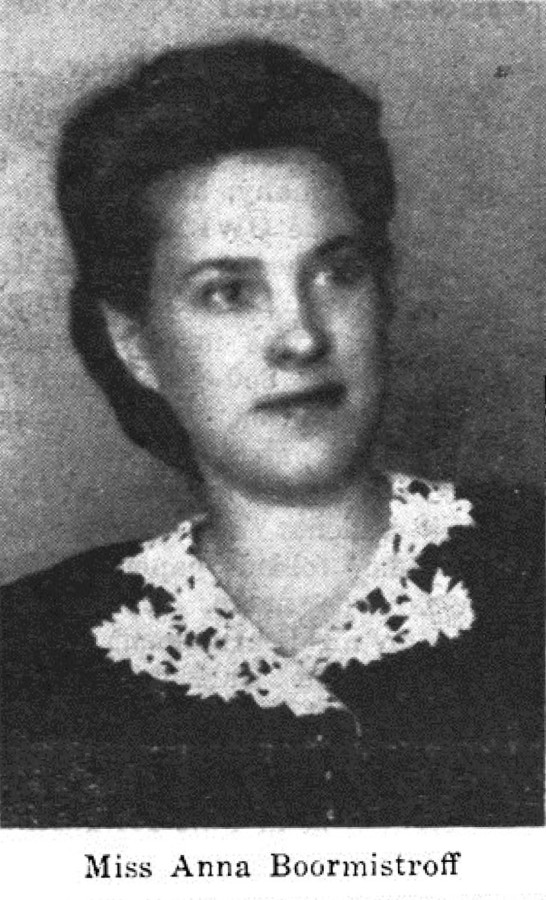 An unsophisticated Russian girl and her search for the bust of Alexander Pushkin, Russia's greatest poet, are responsible for the fact that the Shanghai waterfront will again have its Angel of Victory. She is Miss Anna Boormistroff, known to her parents, relatives and friends, as Nusia, a Shanghai born and bred girl.

The whole thing goes back to about a year ago when the bust of Pushkin was stolen from the memorial erected by the Russian community on the occasion of the 100th anniversary of the death of the immortal bard, at the corner of Route Pichon and Route Francis Garnier.

One day about a year ago the local Russian community awoke to learn that the bust they had erected had been stolen by unknown thieves. This theft aroused indignation of the entire community [...]. Quoting the Japanese officer in charge of Foch police station, [one pro-Japanese] paper revealed that some unidentified thieves had stolen the bust and that the police authorities would not leave one stone unturned until it was found.

What the paper did not write was that there was a policeman on duty all through the night and that the weight of the bust was too great for any one or two men to carry it away. Moreover they were people who declared that it was extremely hard to take bust off its pedestal without making the noise.

As the theft occurred shortly after many other monuments had been taken away by the Japanese for military use, there was no doubt in the minds of the Russians that Pushkin too had been stolen by them. The disappearance of the bust, just like the demolition of other monuments in Shanghai, had an extremely unpleasant effect on the population and especially on the foreigners. Among those grieved was Nusia. The girl had received part of her education in a local Russian school named after the famous Russian poet and moreover always regarded him is her favorite.

Weeks passed, then months, and there was no news regarding the investigation promised by the Japanese officer from Foch police station. Then one day he came the news of Japan's surrender and people breathed freely for the first time in almost four years. The end of the war caught the Japanese military authorities in Shanghai by surprise and the latter, though they tried hard enough, were unable to destroy all the evidence of their evil deeds in Shanghai. When the Hongkong and Shanghai Bank lions were returned to their old places, many people began to hope that other memorials stolen by the Japanese would be brought back.

One day Miss Boormistroff visited some friends in Wayside and complained that the bust of Pushkin was still missing. Her friends told her that there was a dump at the corner of East Broadway and Dent Road where the Japanese kept all the scrap iron, radiators, monuments and other metal things they had "received" from various places for the "prosecution of the war for new order in east Asia."

The next day Nusia went there. This dump was formerlly a block of houses which were raized in the Sino-Japanese hostilities in 1937. Half of this block was later taken and built up by the local Japanese bus company, while the other half was used by the Japanese for metal, gasoline, trucks and also is a playground for their troops. When the Japanese surrendered, the deserted this place and left to the mercy of anyone who wished to take something away.

Young girl did not find the thing she was looking for, but she found lots of other things and among them she saw the broken pieces of the Angel of Victory. She left the place disappointed at having failed to find the bust. A few days ago, Nusia and her mother were invited by Mrs. E. F. Hardman, whom they had known for many years and who had just returned home from camp. In the course of their conversation, Nusia noticed that all the radiators in the apartment were gone. Little thinking that she would create a sensation, Nusia told Mrs. Hardman that she knew the place where the Japanese had dumped all the metal they had stolen in Shanghai, among them the Angel of Victory.

Her hostess immediately telephoned her husband, a veteran of World War I, and the latter got in touch with Mr. E. S. Barraclough and told him that the daughter of one of the Sassoon employees knew where the Angel was.

Mr. Barreclough was quick to take advantage of the information given him and immediately summoned the girl's father to his office and asked him if he could get his daughter to take them to the Japanese dump. Nusia's father was at work that time and he gave Mr. Barraclough his home address. Mrs. Boormistroff and her daughter were in when they had a visitor who asked the latter if she would go with him and show the place. That she did with the result that the widely spread wings of the Angel may soon be seen again on the Shanghai waterfront.

The news of news of Nusia's discovery of this memorial spread fast, and many people got in touch with her, among them one of the sons of the late Silas Hardoon, who approached her to help him recover his father's statue, promising to reward her handsomely. But the statute was not there, although two busts of some famous Chinese were found.

The 18-year-old heroine of the day recently finished at a Russian girls' school and is now studying shorthand and typing. She has had congratulations from many friends for her discovery and when asked how it felt to be in the spotlight of public opinion, she said that she had never expected that a small thing like this would create such a stir.

"If I had not found it, somebody else would do so, as this Japanese dump is open and all these metal things and memorials maybe seen from the street. It's surprising that no one had noticed the Angel before," she said. Incidentally, there is no one guarding this place and unless this is done, many things may vanish before long.

In January 1947, slightly over a year after the discovery of the Angel, the North-China Daily News announced the plan to restore the monument. It published the photograph of the remains, kept in the British Consulate Compound. But the plan did not come to fruition. Pushkin's bust, however, was remade with the help of the Soviet Consulate. See the images below to track the story visually or refer to Prof. Robert Bickers' articles, such as this one, for more info on the War Memorial. 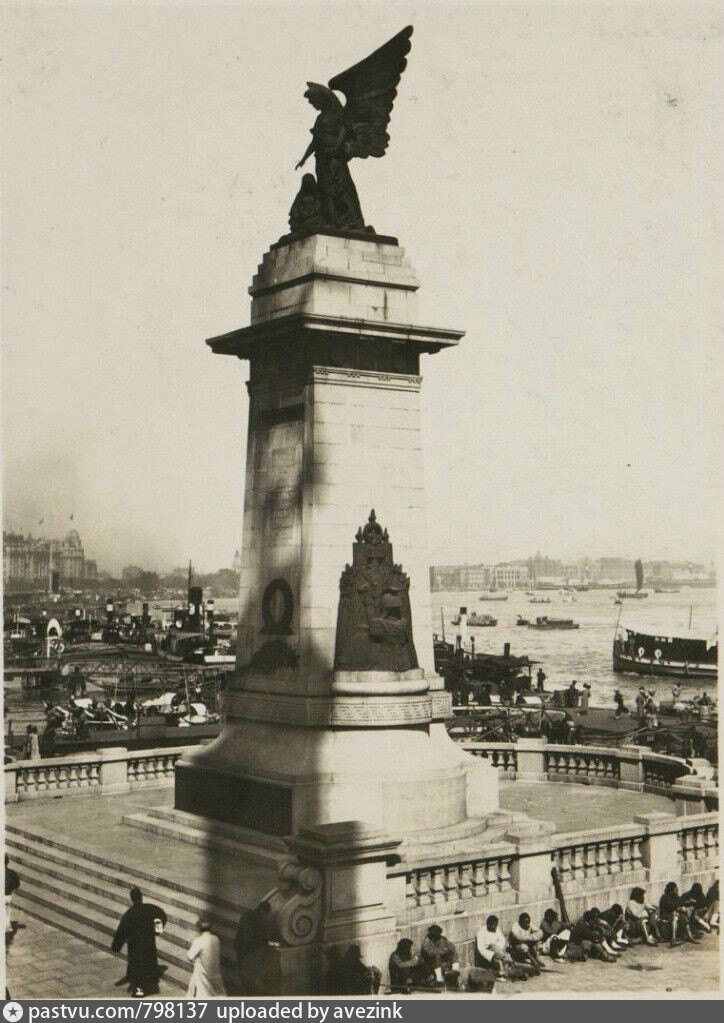 The War Memorial ("Victory Angel") in 1931. The monument was designed by the Scottish firm Stewardson & Spence and unveiled in February 1924. Image: 亚东印画辑. 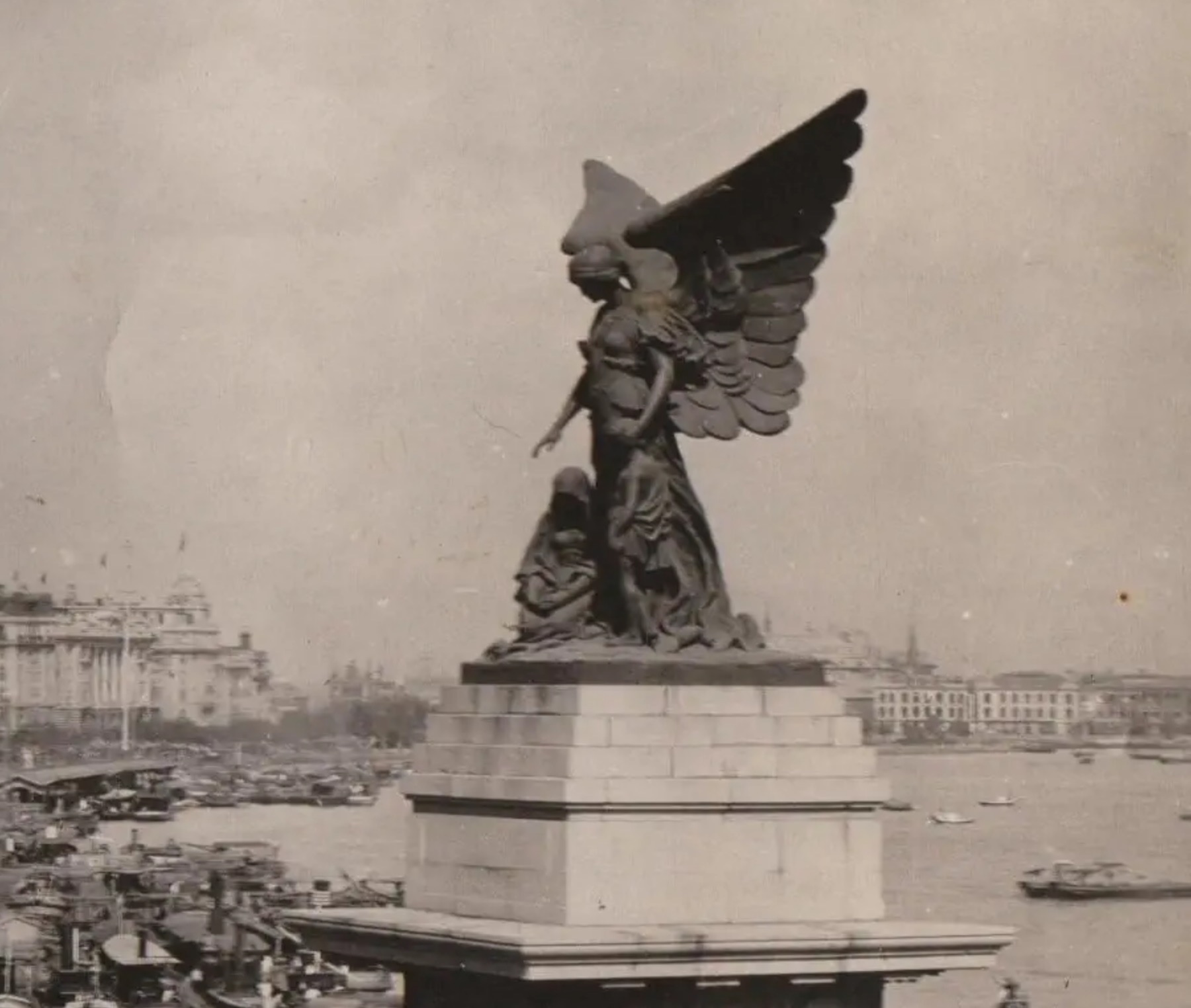 Closeup of the mourning angel and two weeping children at her feet (work by Henry Fehr). Image: China Postcard flickr. 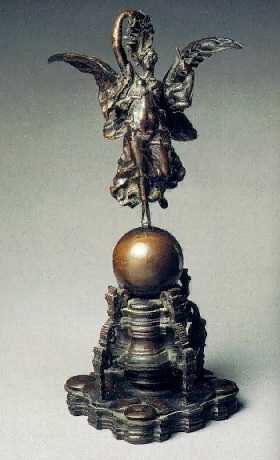 One of Henry Charles Fehr's models of the Victory Angel looked a lot more jubilant than the sorrowful figure he finally made. Image: source. 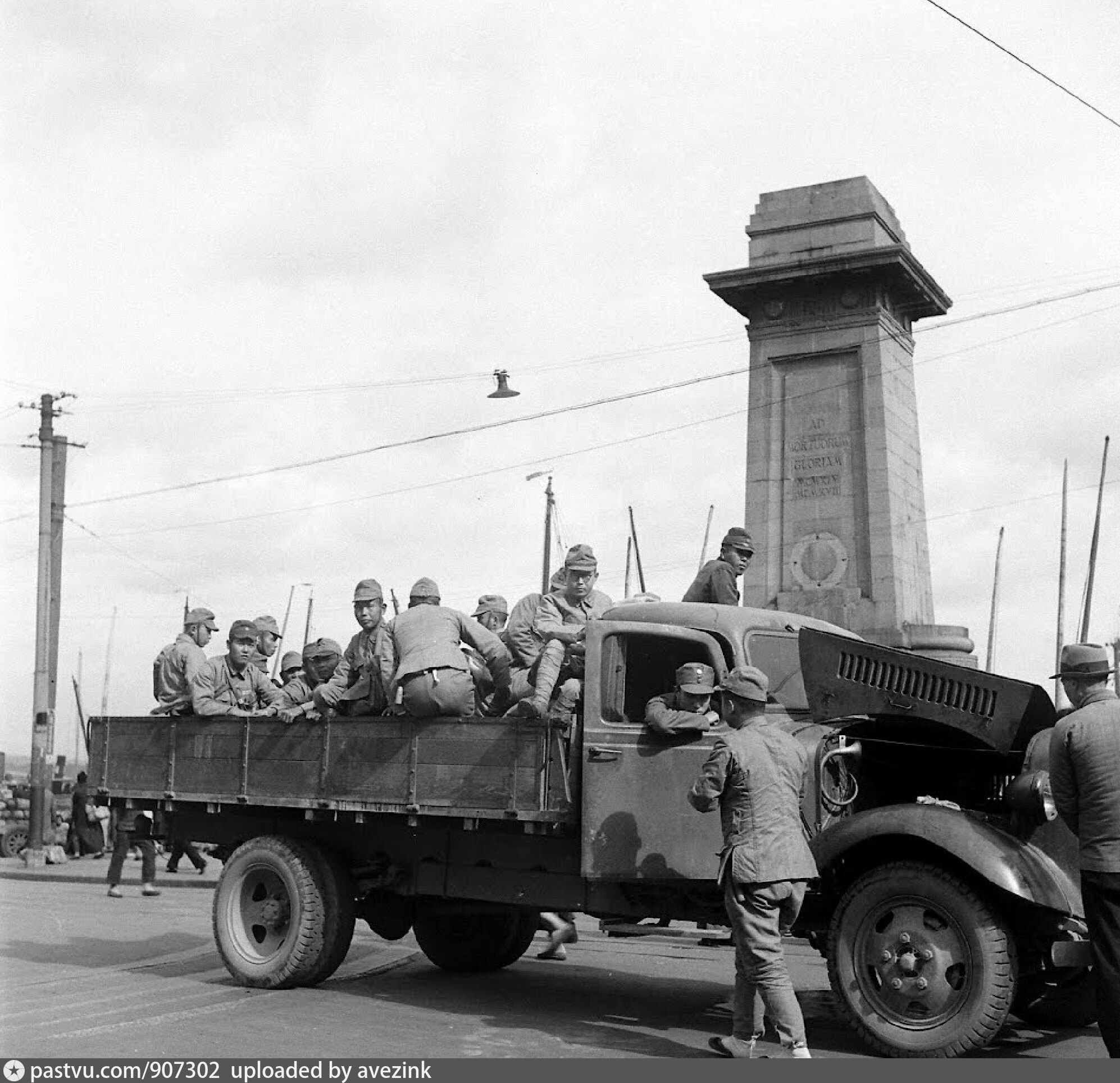 The Bund and the empty pedestal of the War Memorial, around 1946. Image: George Lacks. 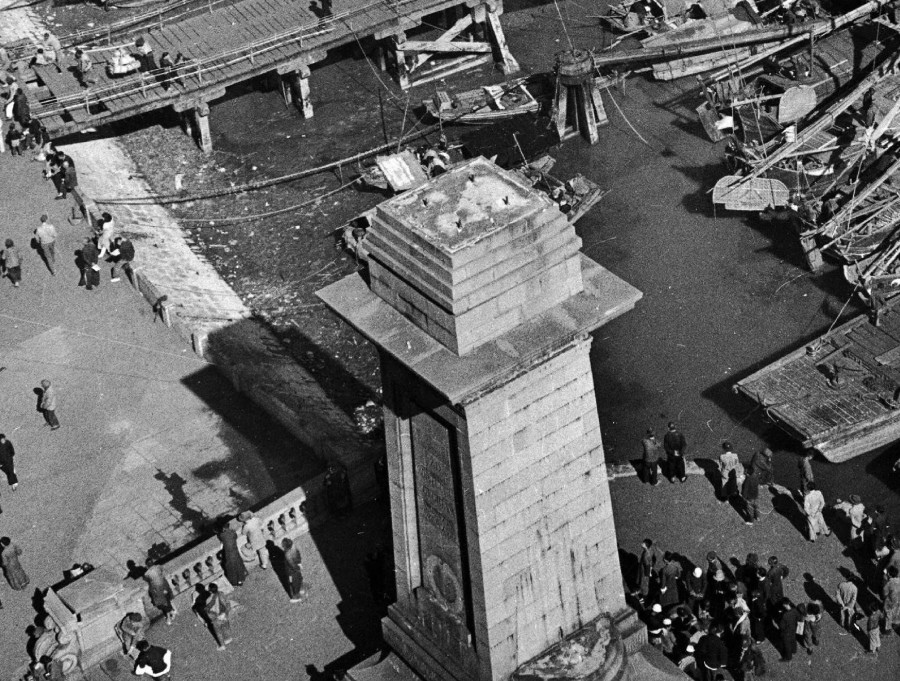 Empty pedestal of the War Memorial seen from above, in December 1945, around the time of the discovery of the Victory Angel in the dump on East Broadway. The bronze decorations on all sides of the plinth are gone as well; they were the work of the Russian sculptor Isabella Karsnitsky. Image: George Lacks. 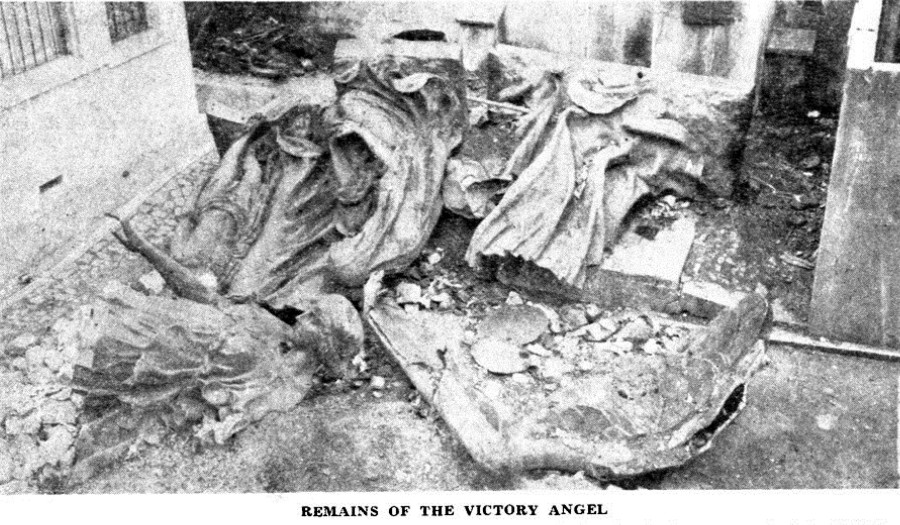 The remains of the Victory Angel kept in the British Consulate compound. Only a part of a wing and the left arm were missing. Image: NCDN, January 1947. 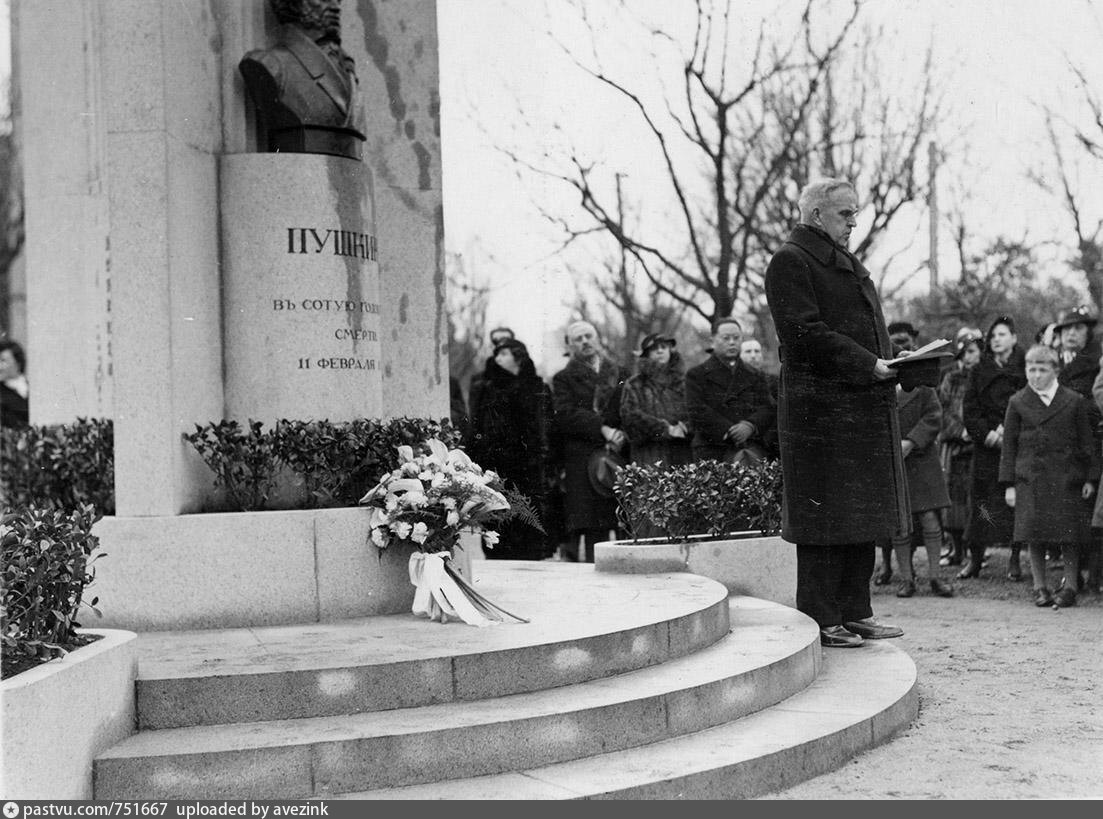 The unveiling of the Pushkin's monument in 1937, at the corner of Route Pichon and Route Francis Garnier. Image: Chinese internet. 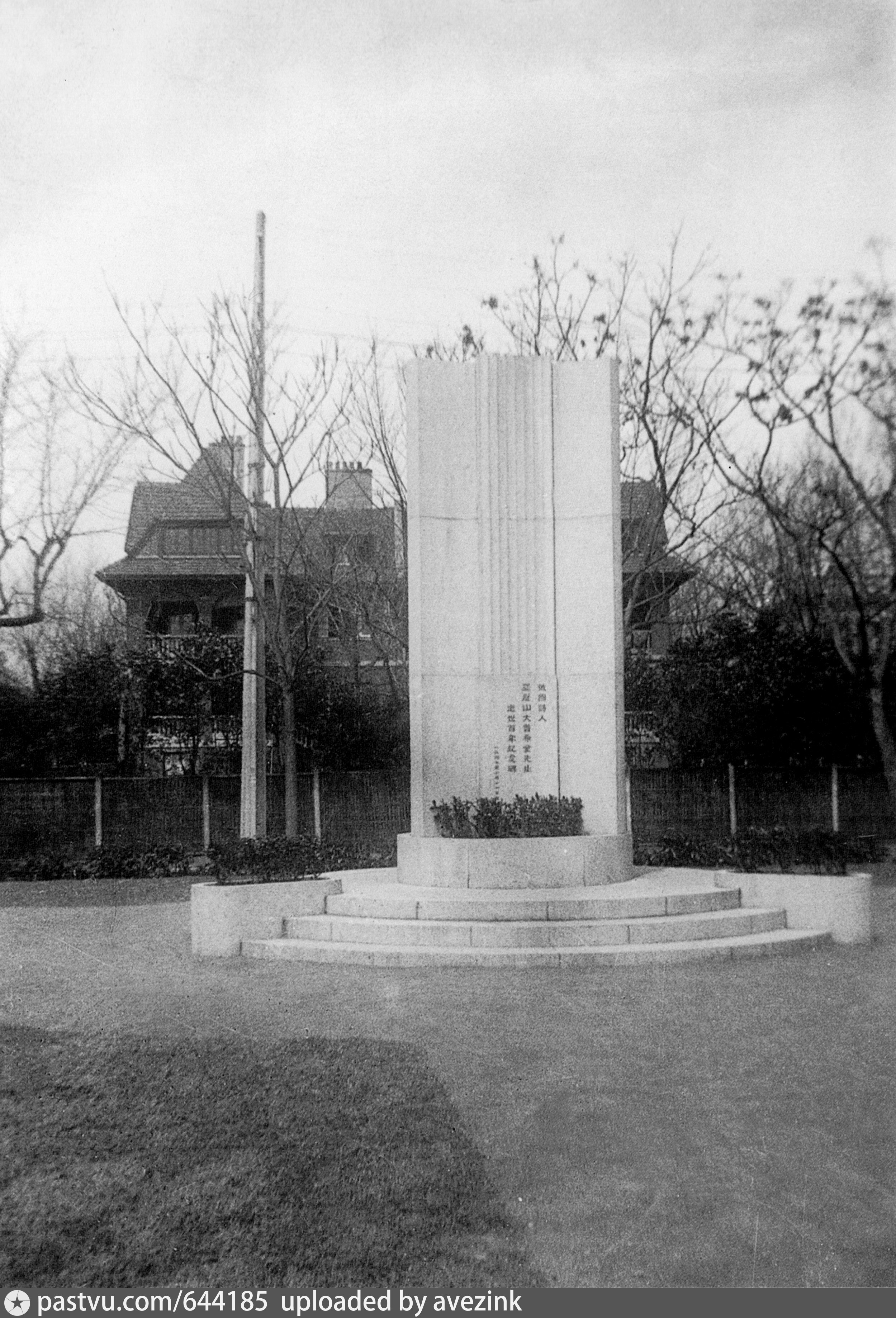 The empty pedestal after the disappearance of Pushkin's bust in November 1944. Image: Tess Johnston, Frenchtown Shanghai. 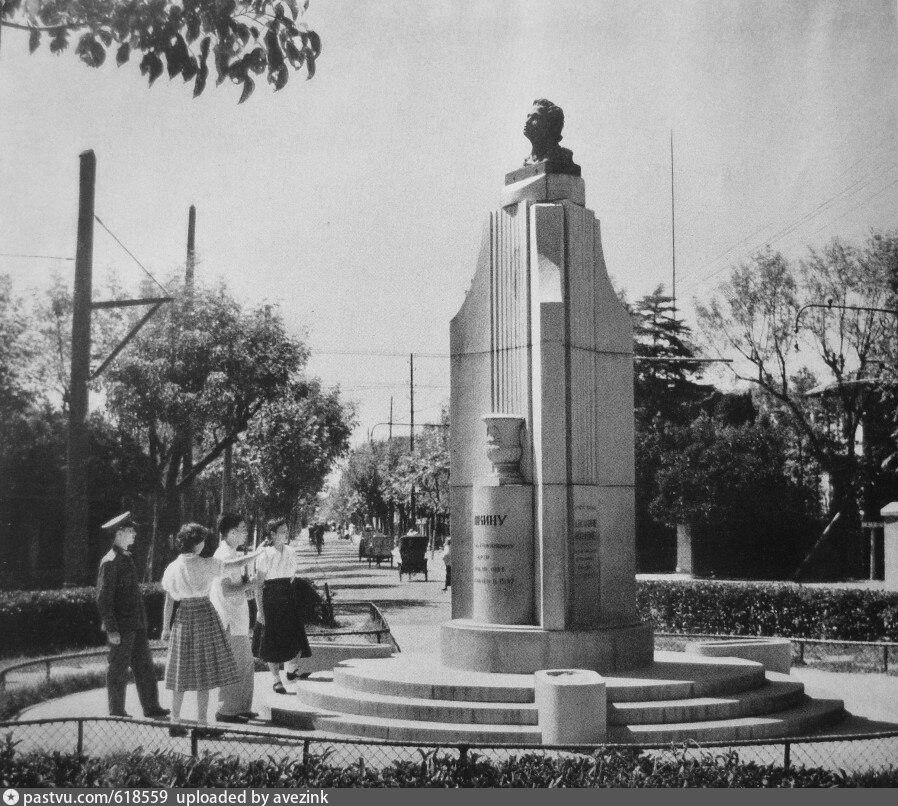 The new bust of the poet Alexander Pushkin, made by a Soviet sculptor and mounted on the pedestal in 1945. Image: Chinese internet.