This article is adapted from the Russian-language piece in Magazeta. 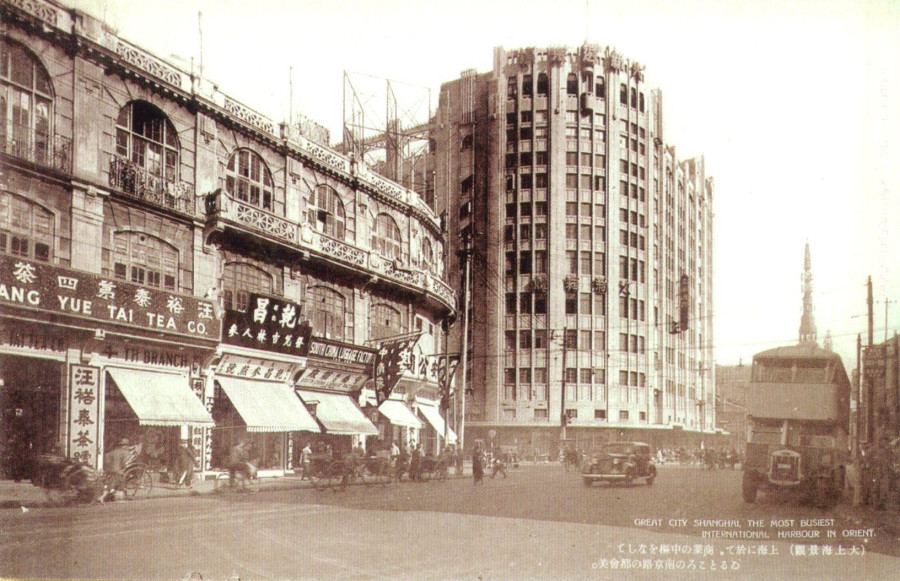 The department store Sun Co. opened in 1936, becoming the last and the largest among the four grand department stores on Nanking Road. Its predecessors were Sincere (1914–1917), Wing On (1918) and Sun Sun (1926). Those three were designed in elaborate, baroque styles, while the Sun Co. assumed a more modern, streamlined appearance. Architectural sketches suggest, however, that this might have been a forced decision: the store took longer to build than planned, and the inflation might have forced the designers to abandon excessive decoration and wacky pagodas on top (as was the case with the Carlton Apts, built around the same time). The ten-story building was designed by the architectural firm of Kwan, Chu & Yang. 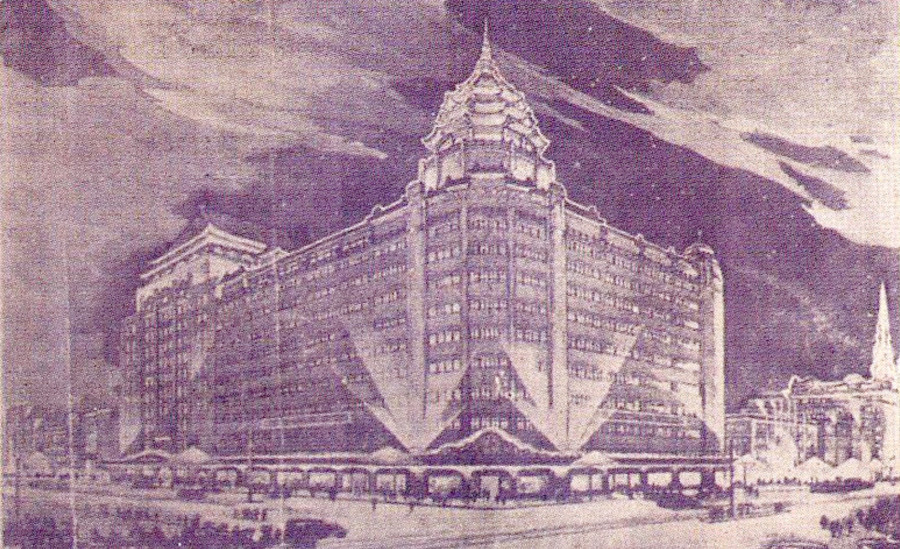 Early design of the store. Image: yiyi1831 for sina.com 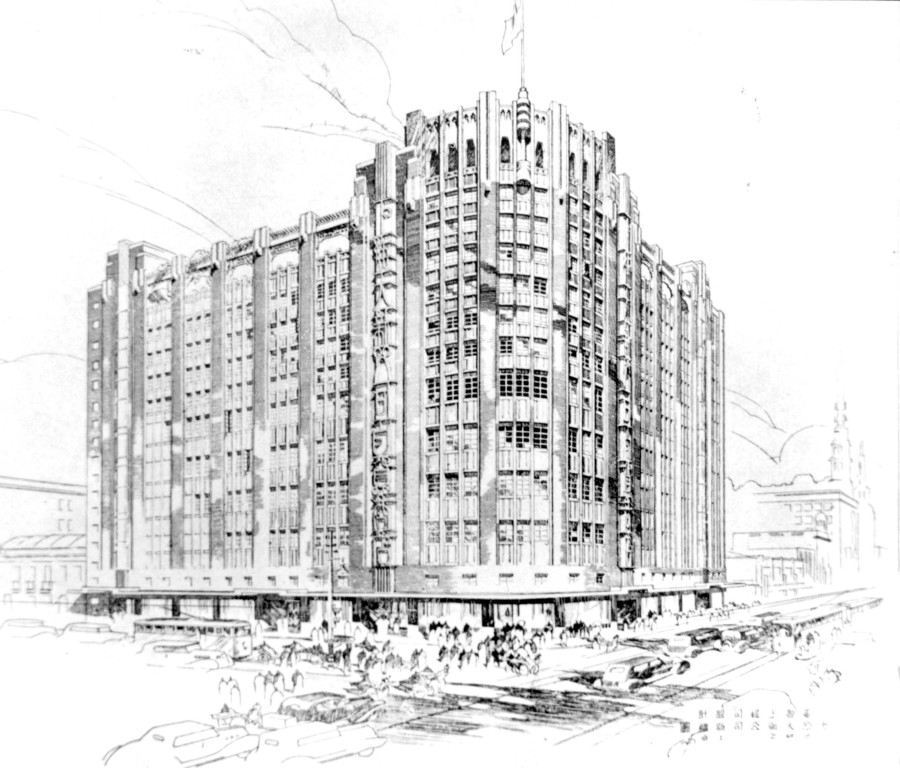 Apart from the style, the new department store had much in common with the earlier three: all famous department stores on Nanking Road come from Australia. Sun Co. was founded in Sydney by an expatriate Chinese clan Cai 蔡, who gradually expanded their import and export operations to mainland China. In 1912, a Sun Co. store opened in Hong Kong, and in 1916 – in Canton. After resolute success in the south, the company employee William Liu traveled to Shanghai to open a new store there. 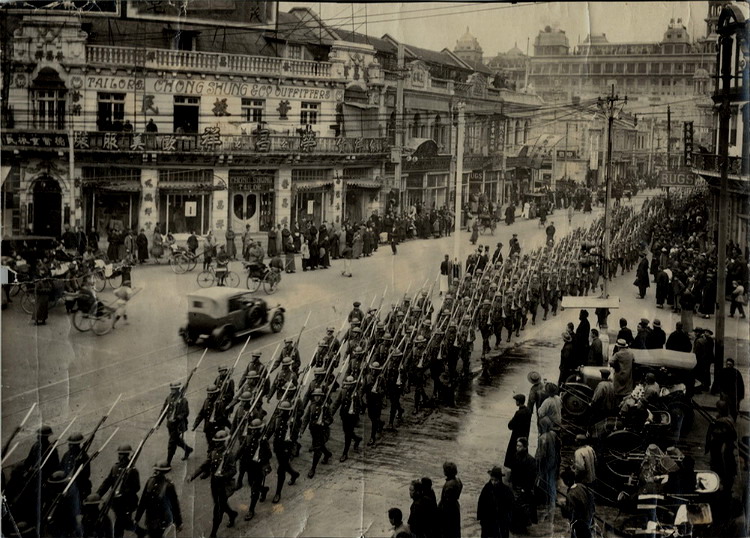 The corner of Nanking Road and Tibet Road, before the emergence of the store. 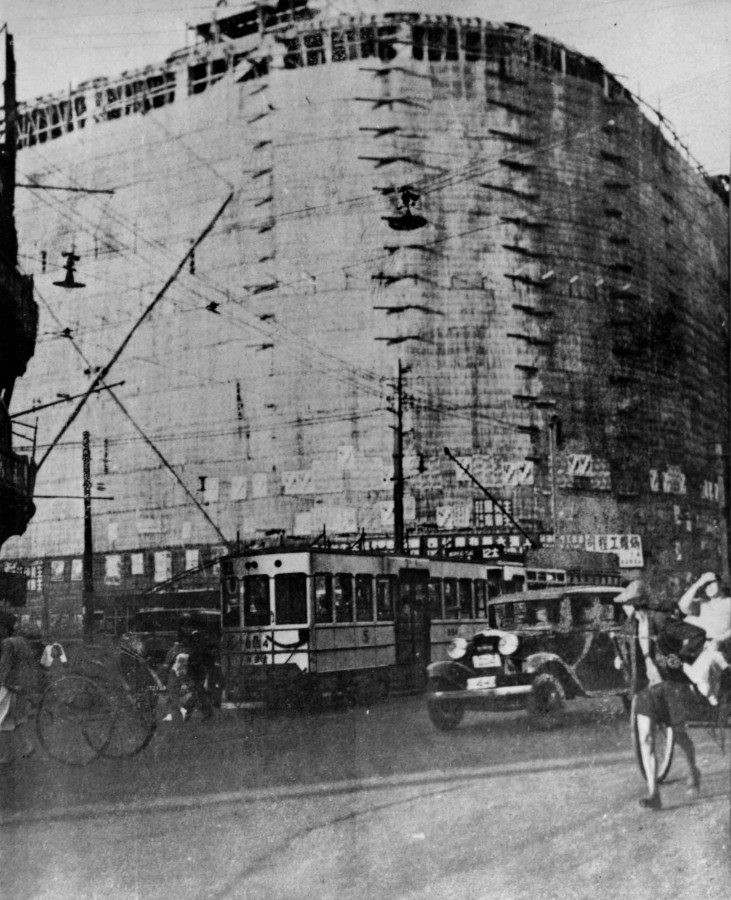 Anticipating the opening of a new shopping emporium, the local English press called it the "Show window of China." More than 60% of the merchandise was, however, imported. But the growing tourism brought on by the popularity of world cruises had the store provide large spaces for Chinese handicrafts and souvenirs. If the tourists came for the souvenirs, the locals came to ride the escalators – the first passenger escalators in the Far East. On the opening day, 48,000 people visited the store, and each rode the escalator. To curb the crowds, the management introduced a 40 c fee for the ride, which could go toward the merchandise cost. 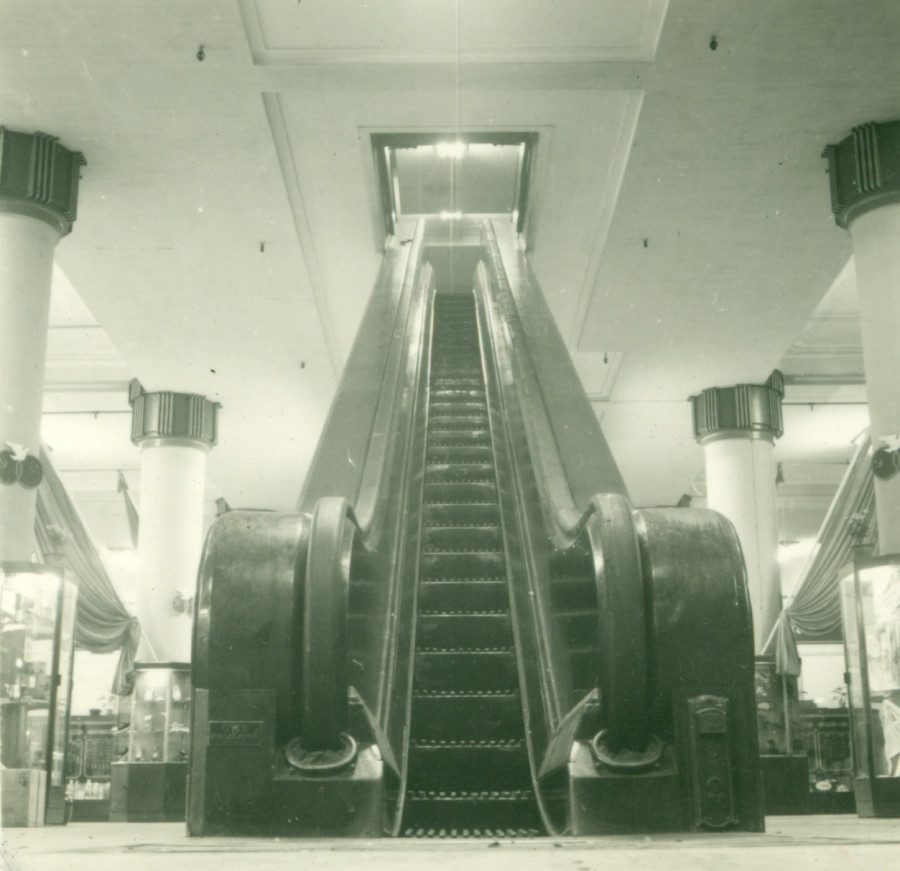 The presence of a fully functional retail floor underground was also a novelty for Shanghai. Three floors above the ground were designated for shopping, while "the upper floors had a restaurant, a theater, an amusement park and a roof-garden tea house." (Michelle Qiao) Occupying the fifth floor was the Paradise Ballroom 大新舞厅, a rare case of a dance hall within a retail establishment. 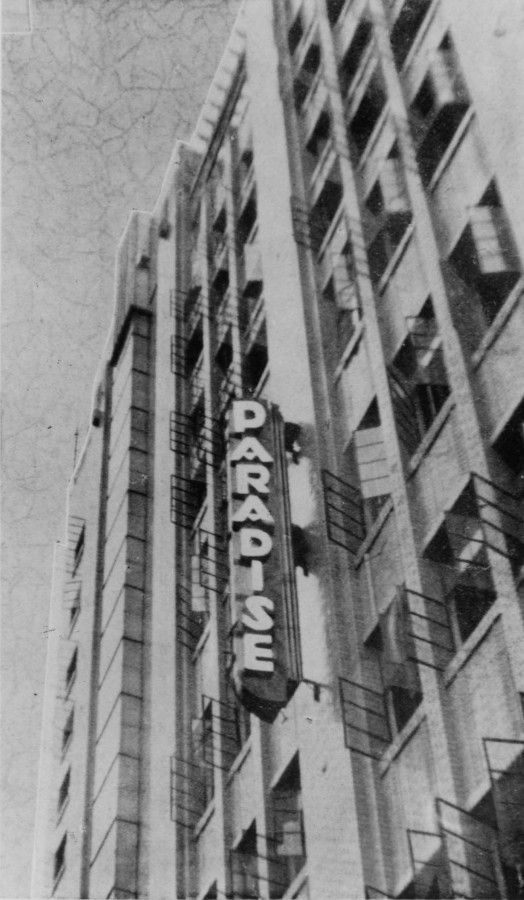 Aiming to achieve high turnover of middle-class consumers, the ballroom functioned like a retail place: an elevator took the customers to a hall where taxi dancers were sitting in armchairs around the dance floor like merchandise in a vitrine. "Tables with plush lounge chairs around them laid behind [...], further behind the tables stretched long sofas, giving patrons and hostesses other intimate spaces in which to socialize." (Andrew Field) 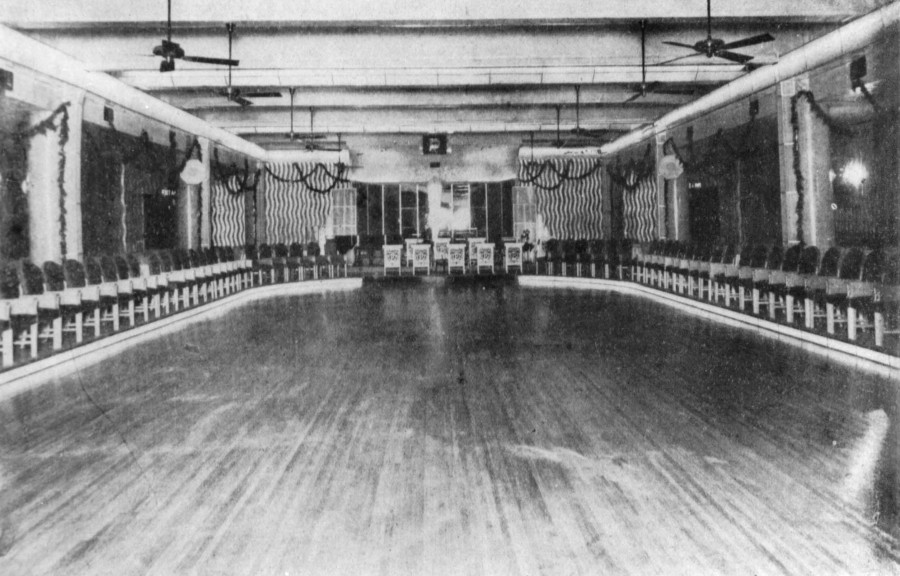 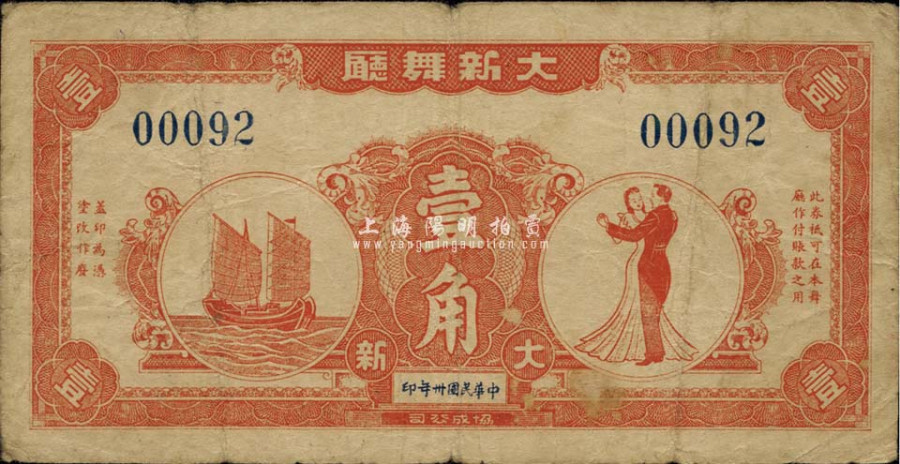 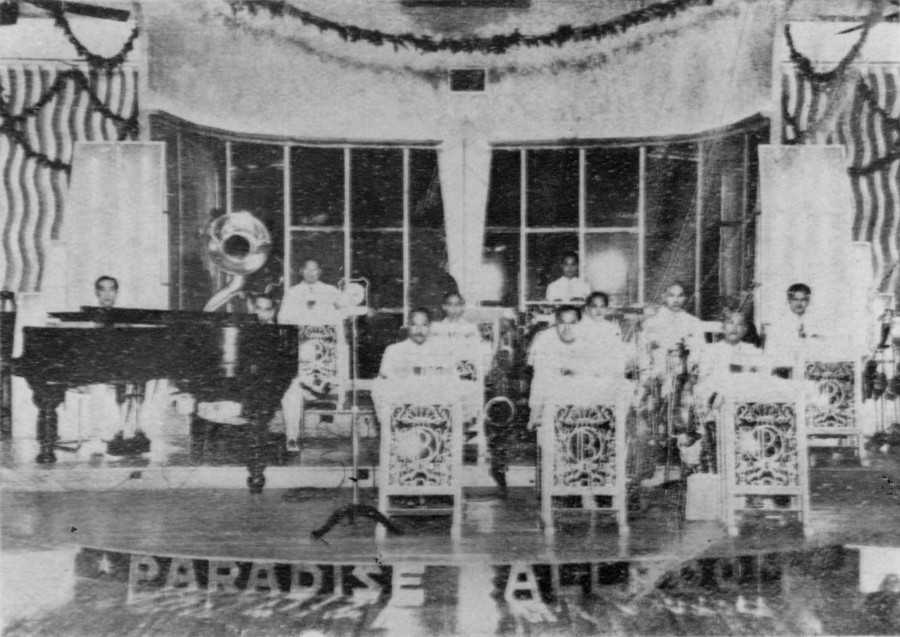 Orchestra in the Paradise Ballroom, reproduced in the 1936 brochure. Image: minguotupian.com.

Paradise prided itself on its powerful electric air-conditioning, essential not only on hot days, but any time when hundreds of customers lit up their cigarettes. In 1936, Paradise Ballroom employed more than one hundred personnel, among which over 60 were paid dance partners. The onset of the Japanese occupation did not detract from the popularity of dance halls, and at times these establishments became the arenas of political struggle. In March 1941, a patriotic terrorist group set off bombs in five ballrooms, including the Paradise; fortunately, only one person was injured. The terrorists distributed leaflets with the following text: 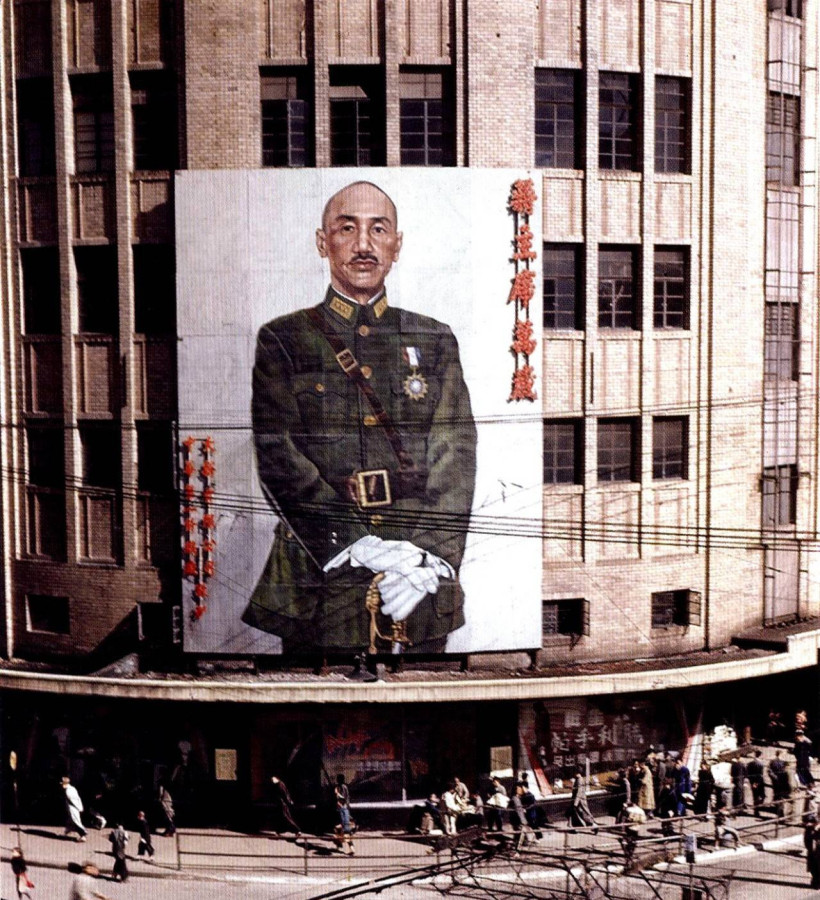 After the occupation ended in 1945, the dance hall craze resurged, as American soldiers stationed in the city created the demand. At the end of 1947 the Republican government attempted to ban ballrooms as inappropriate in times of civil war (that is, the Republicans' fight with the Communists). But by then, about 200,000 people were employed in the industry in Shanghai, and they would not obey. On January 21, 1948, more than five thousand cabaret girls marched along the streets of Shanghai and stormed the Bureau of Social Affairs (located in the former French Municipal Council). The American photojournalist Jack Birns was there to photograph this event, and to him we owe these stellar shots: 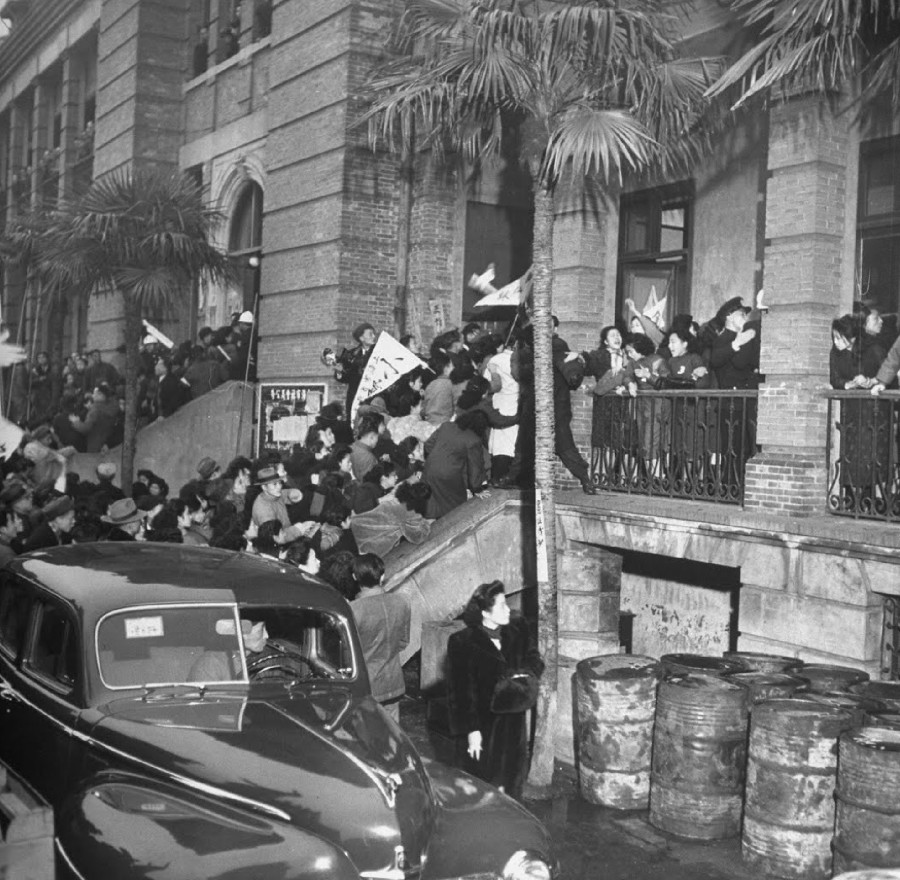 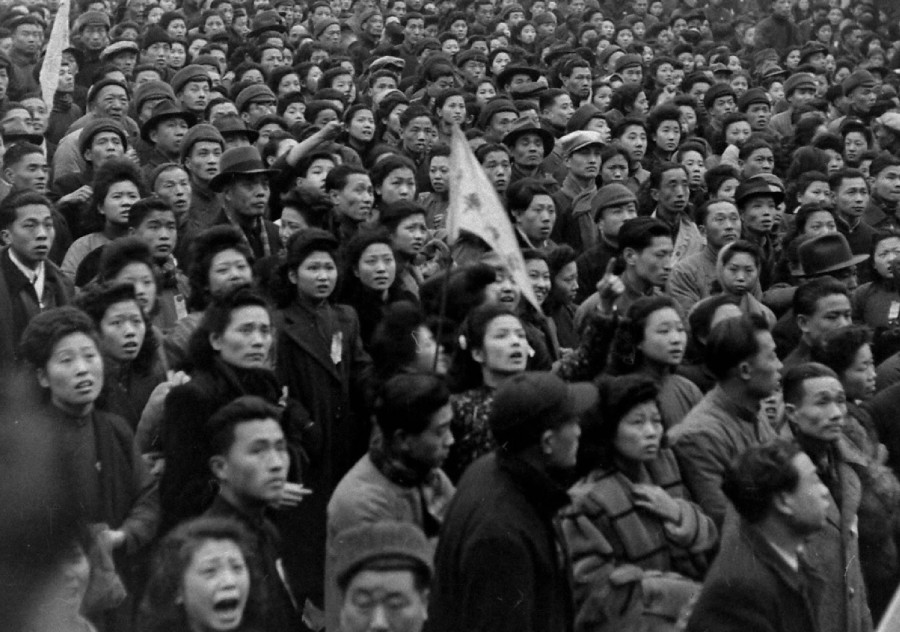 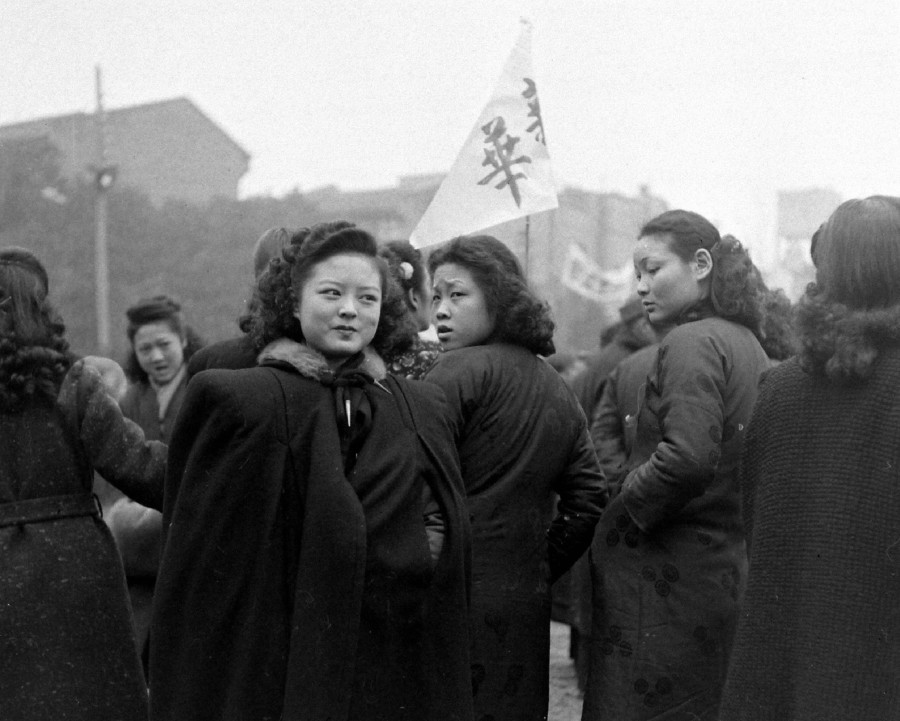 The girls won! The riot resulted in the reversal of the ban. But the victory of the Communists in 1949 drove the knife into the dancing culture. Paradise Ballroom closed, and the Sun Co. store was nationalized and became Shanghai No. 1 Department Store. 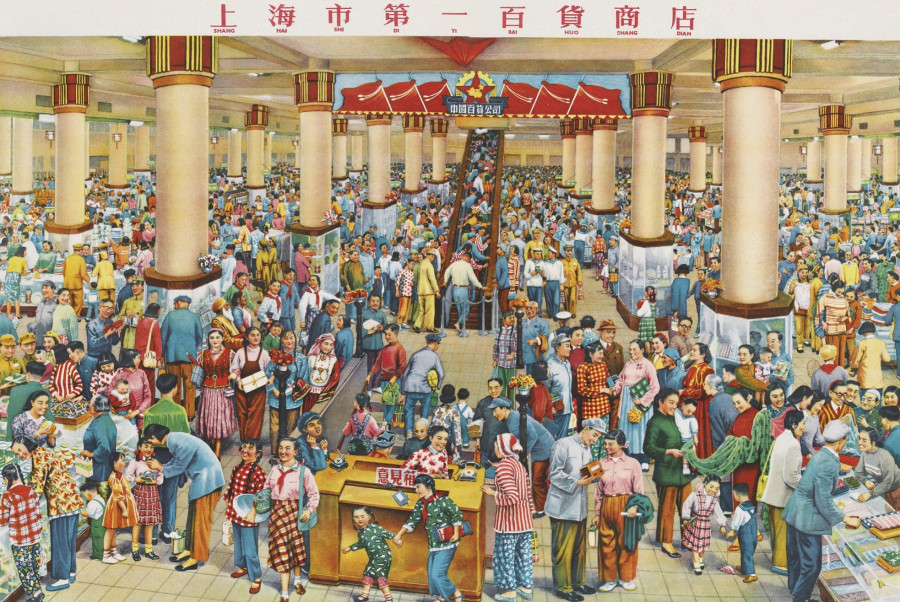 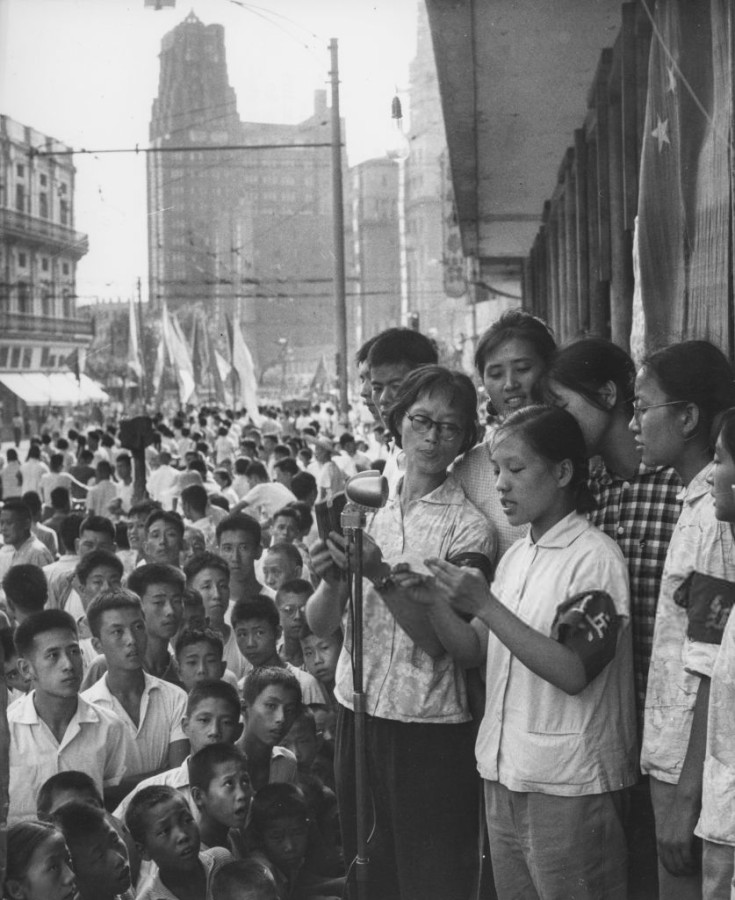 The onset of the Cultural Revolution, 1966. Speech making on the steps of the store. Image: Getty Images. 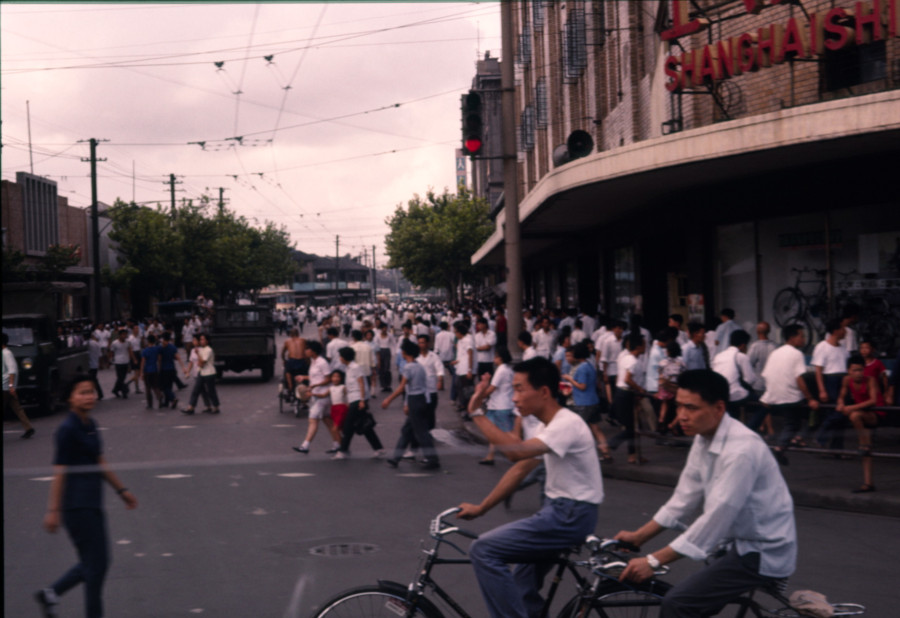 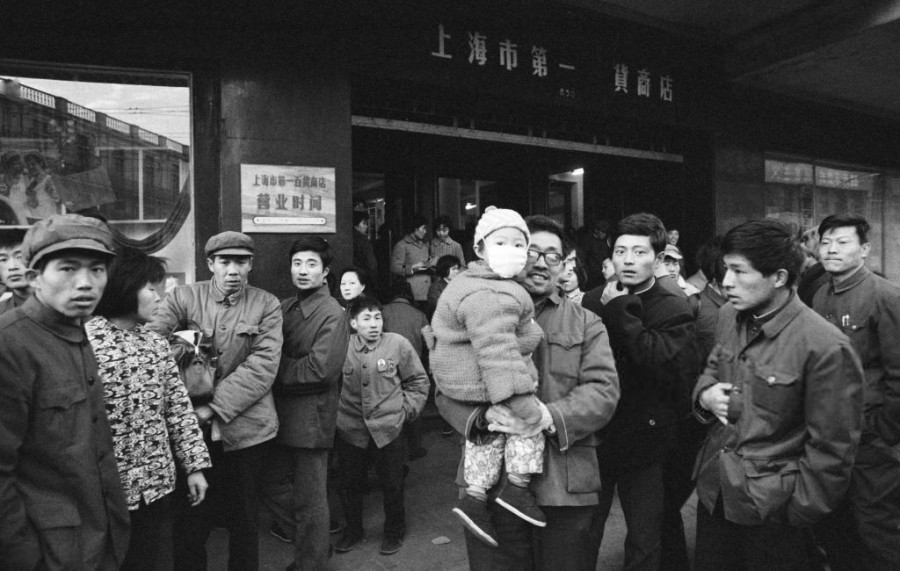 The famous escalators did not function during the Cultural Revolution, and when they were restarted in 1982, lines began to form again. The American visitors to the store that year remarked: "Most Americans, I would think, would reject most of the clothing on stylistic grounds, but women might have some interest in high, stiff-collared blouses of cotton or silk. There are no changing rooms for trying on clothes, but we noticed sales clerks carefully measuring customers before selling them garments." Recently, the store has undergone a lengthy renovation, introducing retro elements into the "revamped" interiors, but the competition on the over-saturated retail market must be quite severe. 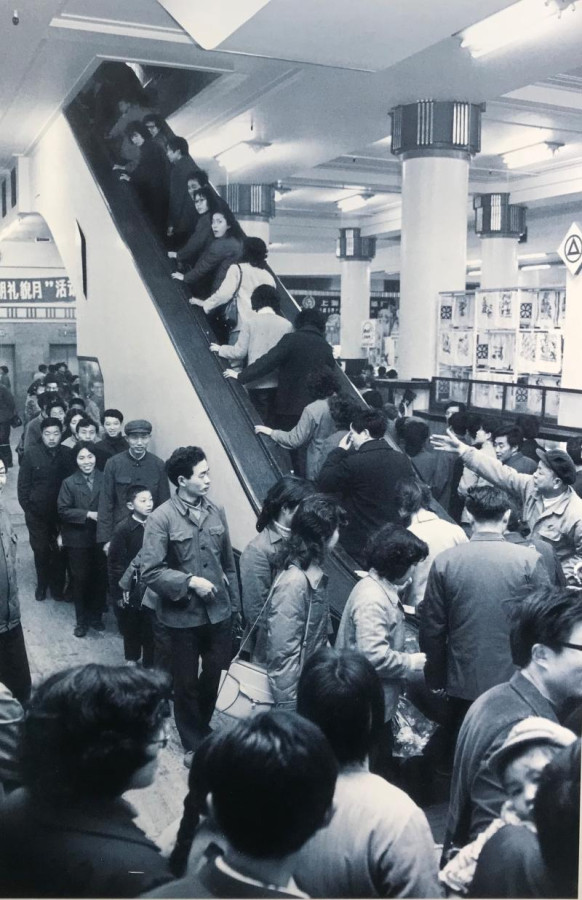 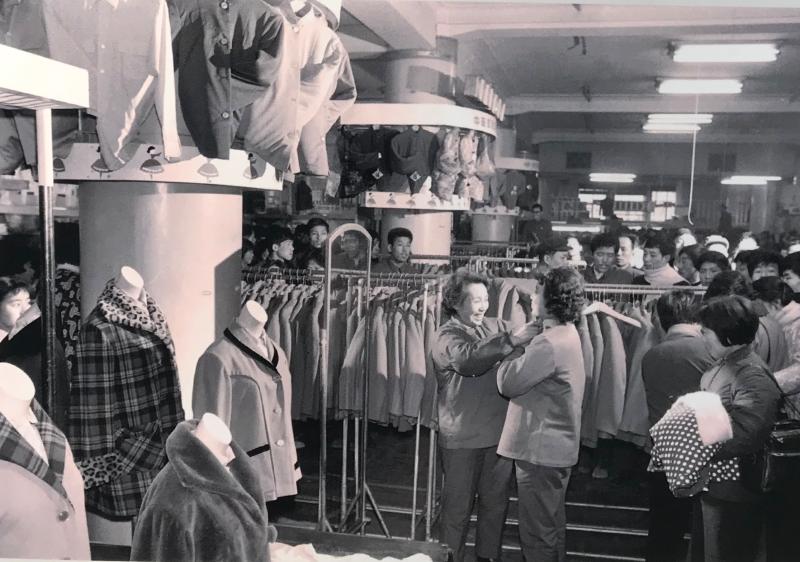 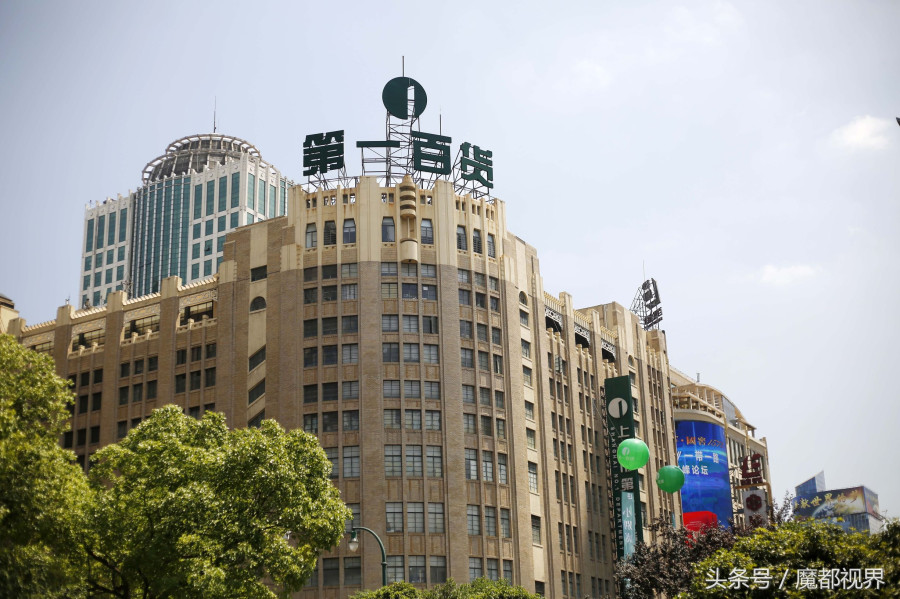 This article is adapted from the Russian-language piece in Magazeta.

See more historic views of the Sun Co. and its vicinity on the PastVu map: