This article was written for the weekly architecture series in Russian in Magazeta.

The location of Xiangyang Park might appear a little strange, because back in 1941, when the park was created, this neighborhood was already immersed in green. To the west, across Route Doumer (Donghu Road), there were the extensive gardens of College Sainte Jeanne d'Arc and St. George restaurant. On the opposite side of Avenue Joffre (Huaihai Road) there were empty overgrown lots where boy scout organizations pitched tents and organized summer camps virtually in the wilderness. 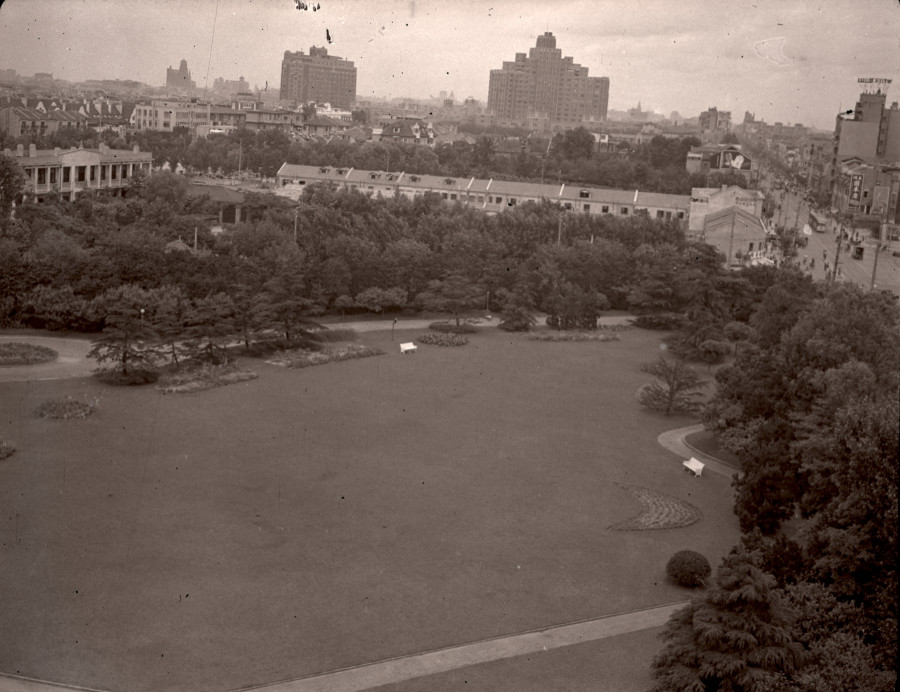 Xiangyang Park is, in fact, an afterthought. It owes its existence to the failure to build a huge administrative complex for the French Concession, which would have massively changed the cityscape and moved the urban core to the west. This plan was in the making since 1930, because for fifty years the French administration had been using the same old building of Hotel de Ville, at 176 Rue du Consulat (Jinling Road), which had gotten so frail it had to be propped with beams. 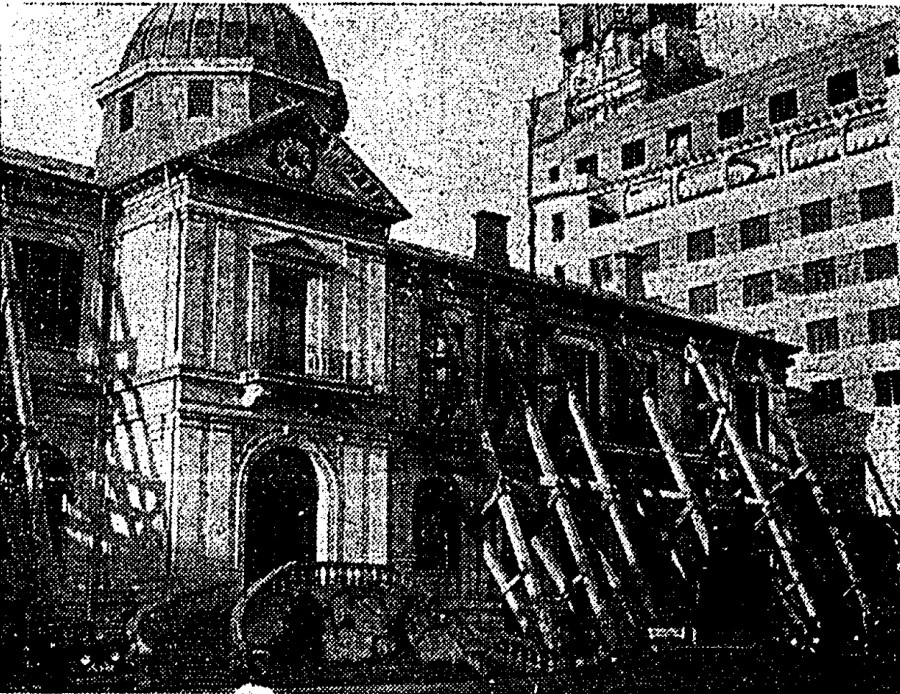 The propped wall of the old Hotel de Ville, with Chung Wai Bank in the background. The North-China Herald, Nov 1936.

In 1931, the French municipality purchased two lots for the new civic center – one owned by the China Realty Co. and a larger one with the burial ground of the family Xue. To ensure easy automobile access to the new site, it was decided to extend Route Lorton (Xiangyang Road) to connect Route Paul Henry (Xinle Road) with Avenue Joffre (Middle Huaihai Road). This news alarmed the Russian community, which had been planning to break the ground for the construction of the Orthodox cathedral on Route Paul Henry, close to the future intersection. The 1932 plan of the architect B. I. Petroff had to be redrawn to take into account the extension of Route Lorton. 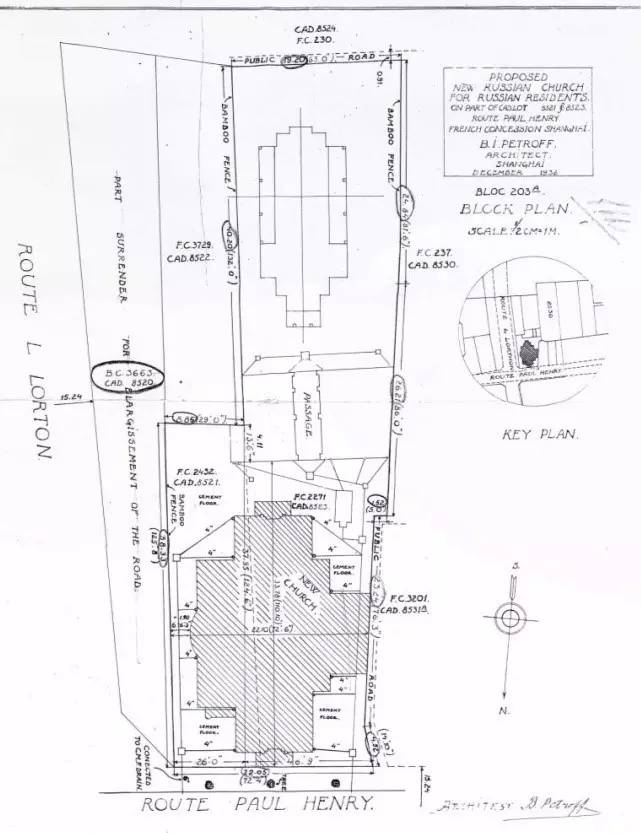 The plan of the site for the Russian Orthodox Cathedral, submitted by B. I. Petroff in December 1932. Shanghai Real Estate Archives.

The narrow strip of land between the new cathedral and the road made the Russian church leaders uncomfortable, so the construction was postponed to collect the funds to purchase this strip. In the meantime, one Orthodox bishop died and another was appointed, which led to a different architect becoming the head of the project. That was Jacob Lehonos, who proposed a larger and more symmetrical building pushed closer to the corner. See this post for more details about these decisions and the construction of the Cathedral. If not for the extension of future Xiangyang Road the Russian Orthodox Cathedral would have looked very different today. 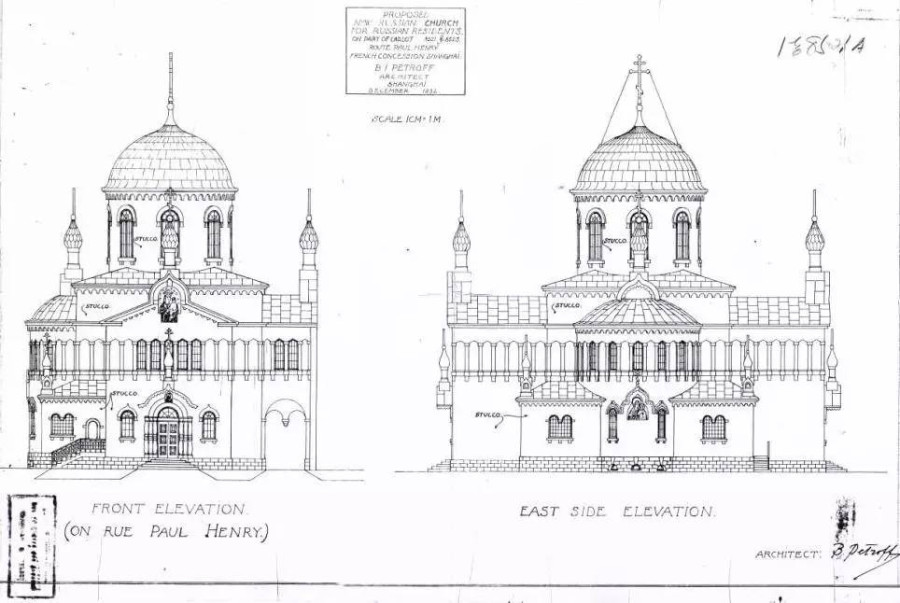 The project of the Russian Orthodox Cathedral, submitted by B. I. Petroff in December 1932. Shanghai Real Estate Archives.

In the meantime, the French organized a contest for the best design of the new administrative complex, and unsurprisingly, a project by the firm of Leonard, Veysseyre and Kruze took the first and second prizes. The project, widely publicized in July 1935, consisted of a sprawling ten-floor building at the northern end of the lot and a landscaped lawn in front of it, going all the way to Avenue Joffre. 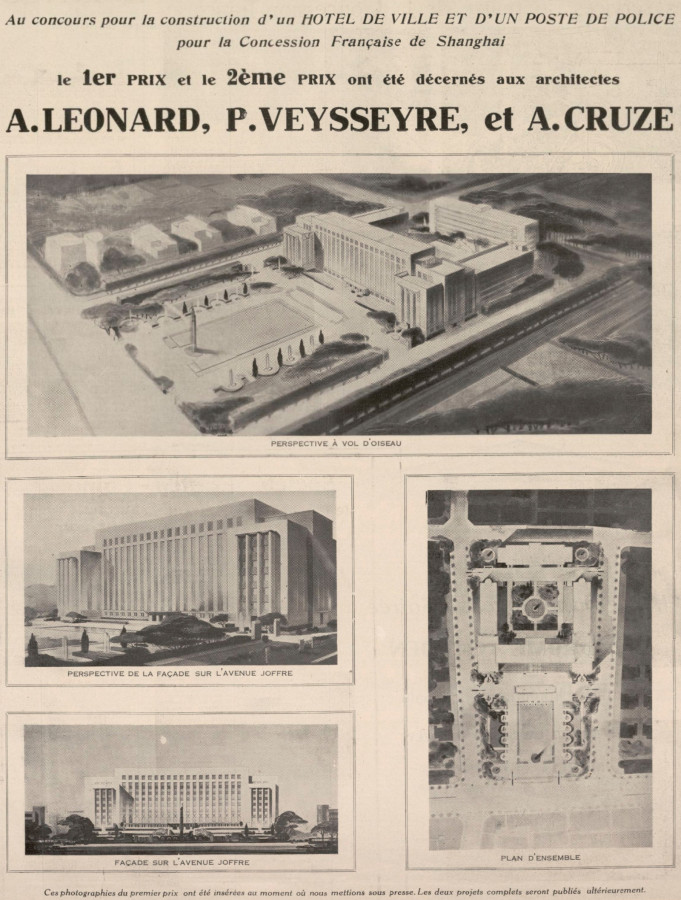 This plan did not come to fruition, although the promise to begin construction continued to pop up in local newspapers until the end of 1936. As it was growing clear that the new civic center was not materializing, the French leadership had to be content with moving into a renovated school building on Avenue Joffre, in October 1936. Pre-war tensions and various foreign trade contingencies drove up the cost of building materials, so that even Route Lorton could not be extended until 1937. When the Russian Orthodox Cathedral was finally completed in April 1937, it was still not sitting on the corner of two streets. 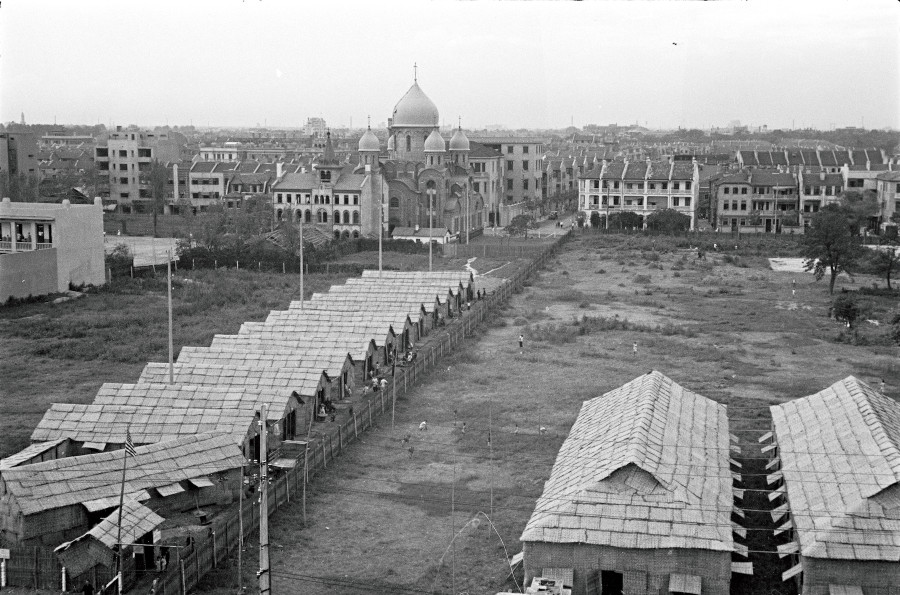 View from Weida Hotel over the unrealized French administration and the realised Orthodox Cathedral. Harrison Forman, 1937, AGSL Collections at UWM.

The hapless lot between Avenue Joffre and Route Paul Henry was eventually turned into a park, which opened in January 1942. It had a wide diagonal alley in the center and over one hundred young plane trees. The park received its name – Parc Ravinel – in honor of a French consular employee Yves de Ravinel (1911–1940) who died in the war in 1940, and there was even a plaque in his honor in the park. 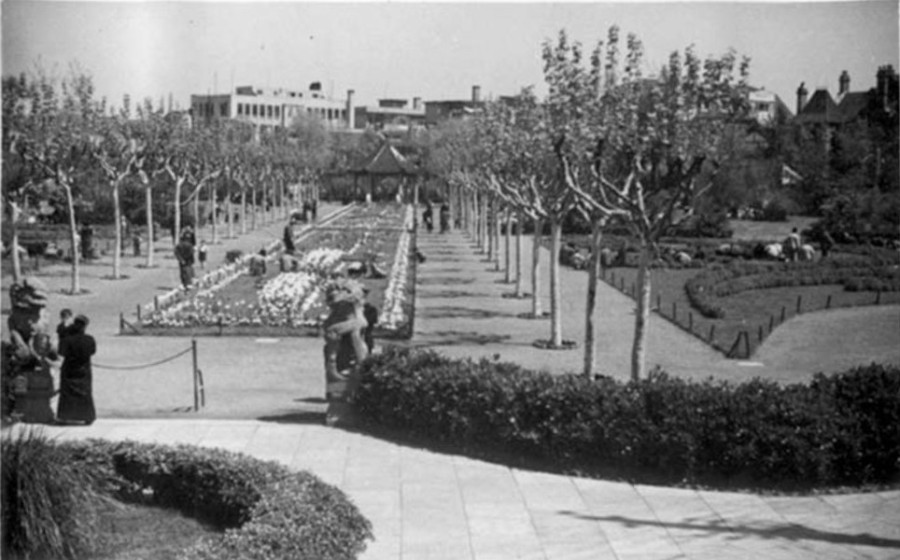 Anyhow, the name Parc Ravinel did not appeal to the public either, who preferred to call it Park Doumer 杜美公园 even though Route Doumer does not reach the park. In the next eight years the park changed name four more times. In July 1943, Vichy France abandoned its concessions and colonial possessions, which led to mass renaming of urban objects in Shanghai, so a little over a year into its existence Parc Ravinel became Taishan Park 泰山公园. After the war, in 1946, it was renamed Linsen Park 林森公园, while Avenue Joffre was renamed Linsen Road. 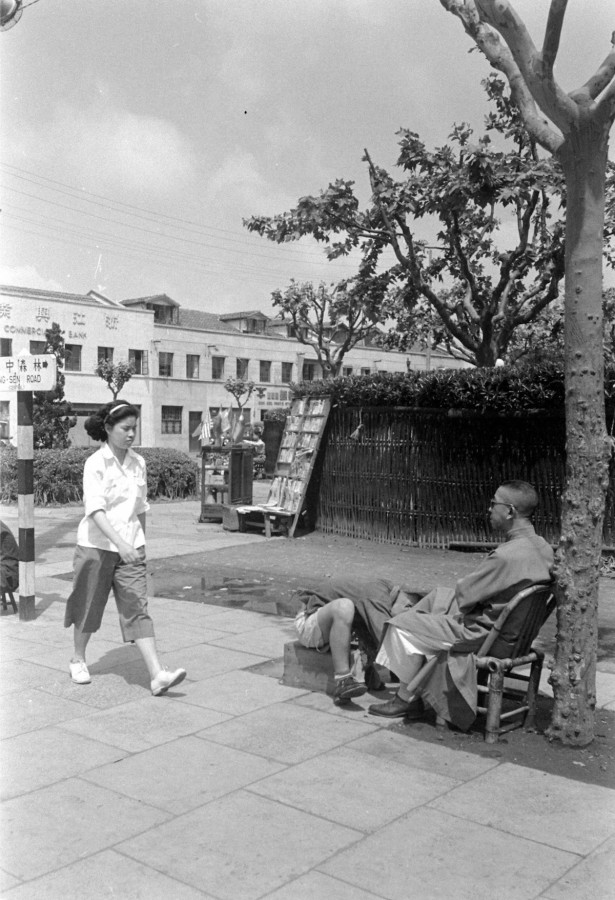 At last, in 1950, the name Xiangyang Park was affixed and has not changed since. The "scribe of Russian Shanghai" Vladimir Zhiganov, who was stuck in Communist China against his will, recorded that a public toilet appeared on the northwest corner of the park, right opposite the Orthodox Cathedral. He was convinced this location was chosen specifically to humiliate the remaining foreigners and to show them Shanghai was no longer a place for them. Considering the Pahsenjao Cemetery had been turned into a washing site for manure carts at around the same time, Zhiganov might not have been too far from the truth. The park has recently undergone an extensive renovation, but the public toilet is still there. 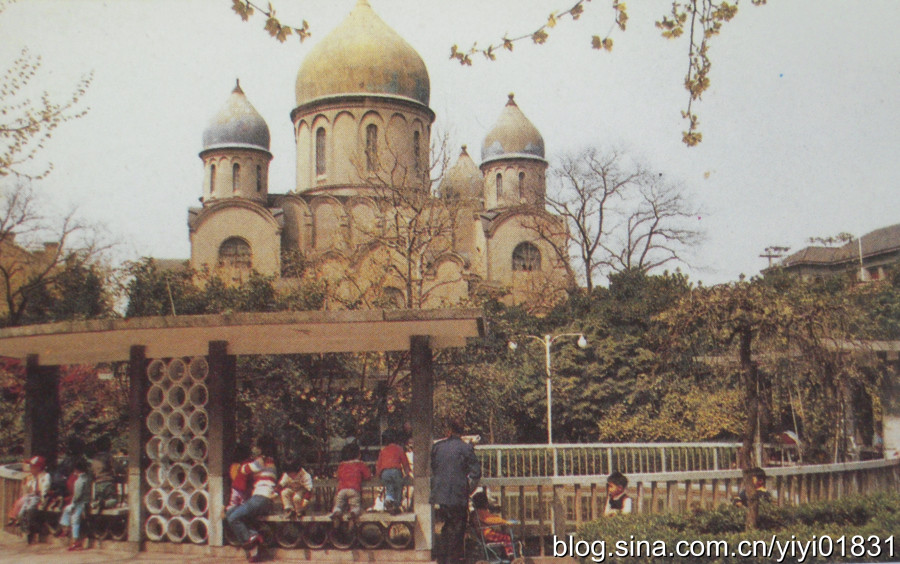 This article was written for the weekly architecture series in Russian in Magazeta.

See historic images of the park on PastVu:

Thanks go out to Didier Pujol for the clarification about the dedication of the park to Mr. Ravinel.