These stunning aerials on Google Arts and Culture have somehow escaped my attention until now, but here they are, at full resolution. 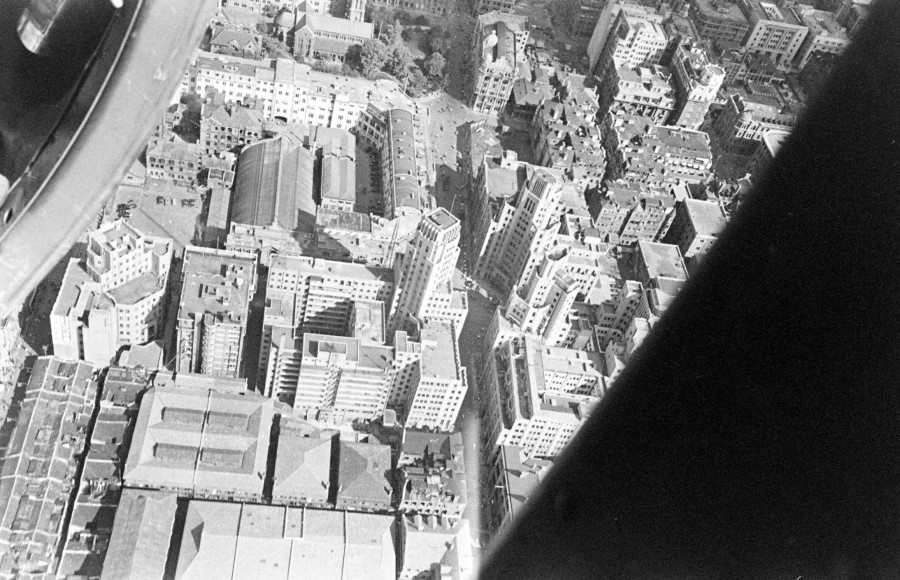 The International Settlement, not far from the Bund, looking north. Three recognizable towers frame the intersection of Fuzhou Road and Jiangxi Road: the Development Building, the Metropole Hotel diagonally across from it and the Hamilton House to the right. The fourth corner of this intersection is occupied by the sprawling Municipal Council. The tower of the International Dispensary is on the left. Commercial warehouses are seen inside this block, at the bottom of the shot. The Trinity Church, surrounded by the garden, is at the top, left. The Telephone Building is across the street from the garden. Hudec's Union Building (Joint Savings Society) is visible at the top right. The colonnaded building of the Bank of China & South Sea is to the left of it. 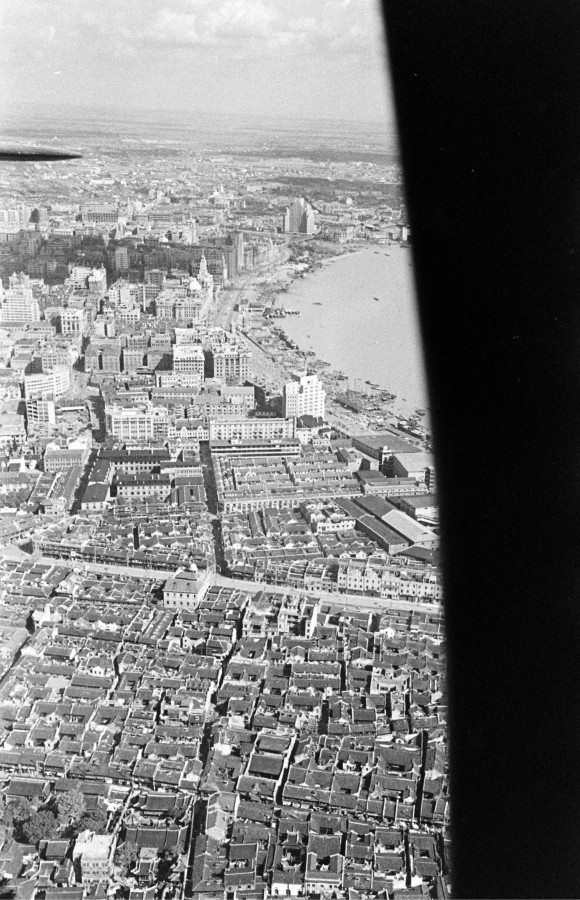 The lower half of the image is the northeastern part of the old town, now extinct. The wide Renmin Road (Boulevard de Deux Republiques) bisects the image from left to right. Sichuan Road is on the left, the spire of the St. Joseph Church faintly visible. The street coming towards Renmin Road from the north is Yongan Road; the one continuing south is Anren Street; it ends at the bottom of the shot, in the center. The three-story Grain Exchange Building (1921) that sticks out from the low-rise landscape near the intersection of Renmin Road and Anren Street is the only historic building that survives to this day. Everything right (east) of Anren Street is now Gucheng Park; everything left has become malls and warehouses for the Yuyuan commercial district. Everything north of Renmin Road is now redeveloped and named 'Soho.'

There is the French Concession beyond Renmin Road, but I'll leave it out for now. Instead I'll zoom in on lower part of the image and explore the old town.

[Get a litte closer...]
The fanciful walled compound in the center looks like a temple, with triple doors in what looks like bright yellow wall. Indeed, this is the temple of brickmakers and builders, called Luban Hall 鲁班殿, built in 1843. Their professional association (guildhall) is the compound on the left, connected to the temple. And to the right there is another ornate temple-like structure, the Tailors' Guildhall (轩辕殿): 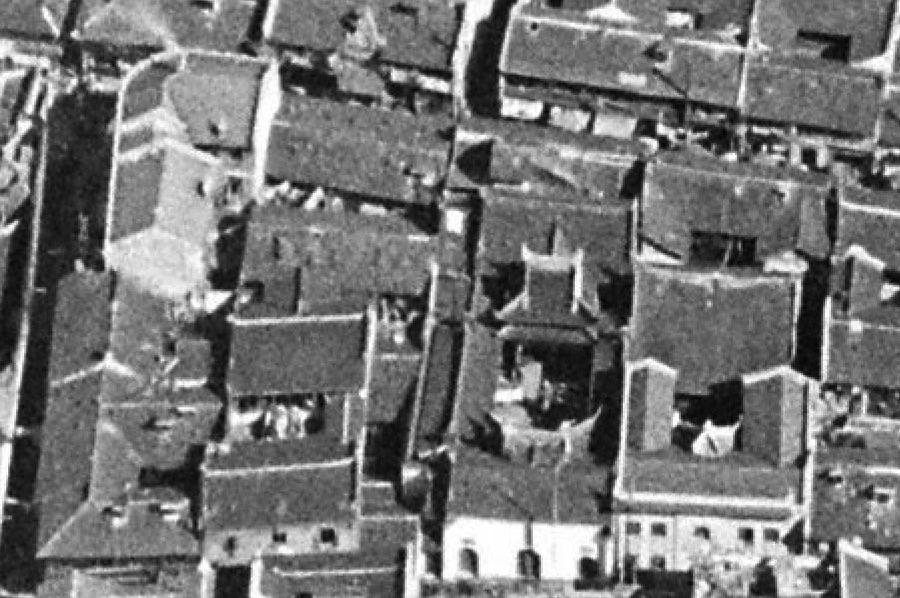 To the north of Fuyou Road, where the Gucheng Park is now, there were other similar multi-part courtyard institutions and public buildings. The stacked courtyard on the left, with a vertical decoration above the gate is the Temple District Police Department. And a large stacked courtyard to the right is the Sauce-Makers Guildhall (酱业职业工会): 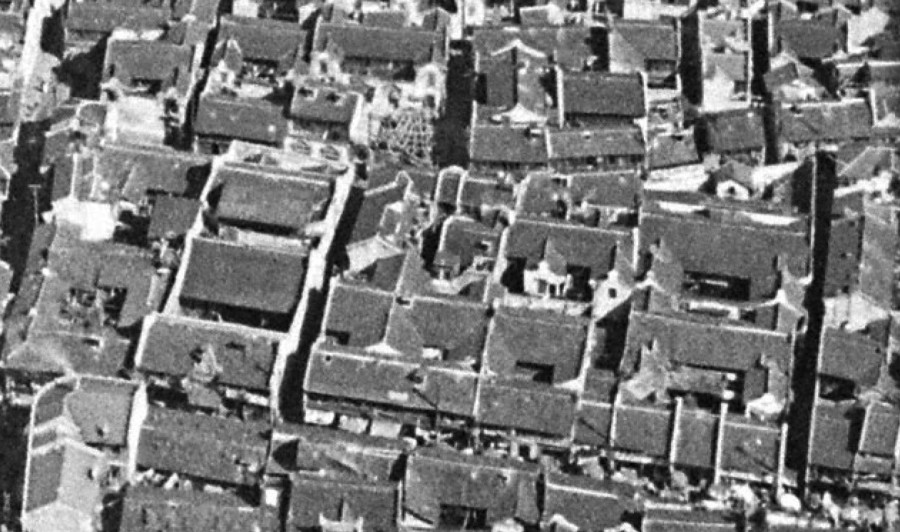 This image is so rich! And very large. The plane is further south than before; the camera is looking north. The wavy line running from the lower left corner toward the lower right corner is Fangbang Road. Two (almost) straight roads intersecting it are Houjia Road (left), and Laojiaochang Street (center).

The Yu Garden is recognizable by the foliage, at the center right of the main image: 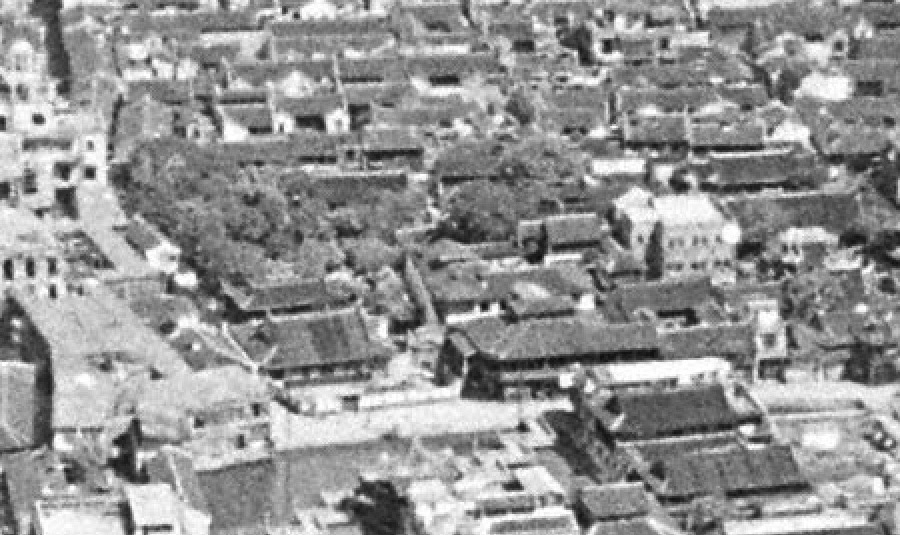 Here are some examples of fine courtyard residences that existed in the old town. To the left are three strings of linked courtyards of the Sun Clan; the empty lot to their right is the site of the memorial temple of the brave Admiral Chen that was damaged during the Japanese occupation. I thought it survived in some form after 1945, but now it is obvious it was obliterated: 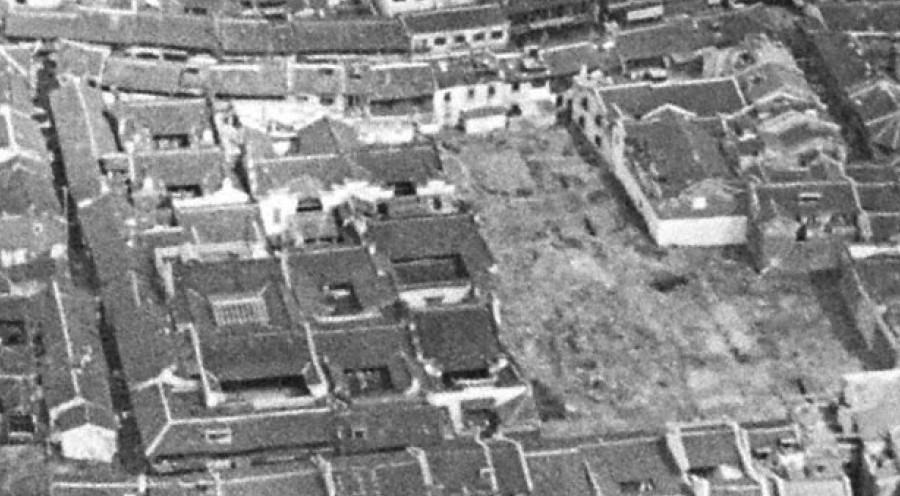 All of this is now malls and a parking lot for tourist buses.

The Guangfu Temple, built around 946 (!), was the oldest temple in Shanghai until its destruction in the 1960s (bottom left at the main image): 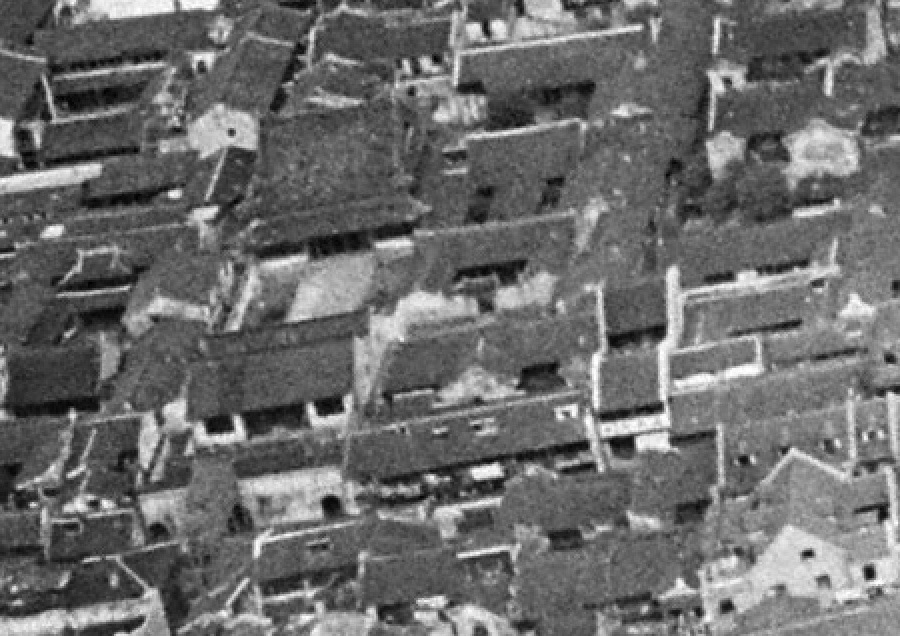 These two prestigious residences across the street from each other are surrounded by high walls. Unfortunately, I don't have a scan of this part of the 1933 property map, so I cannot put the names on them. All of this is now parking lots and malls: 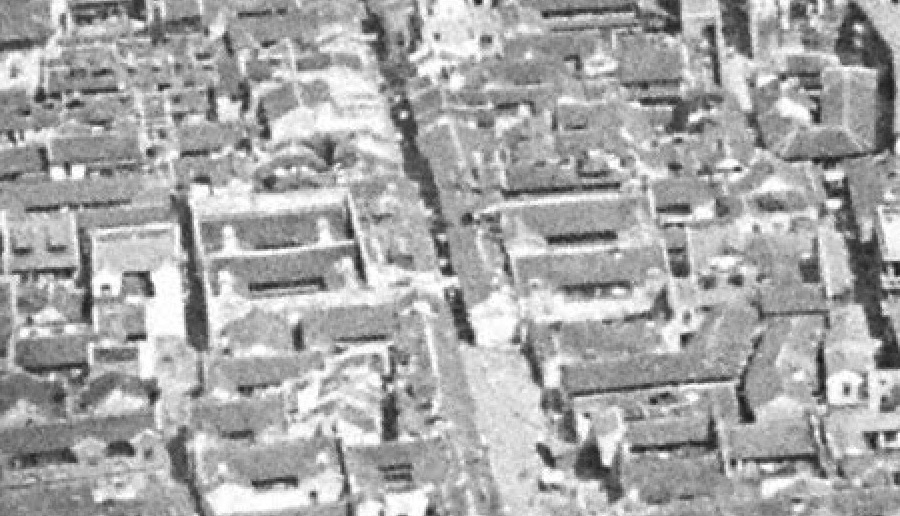 This is curious! Two tall flagpoles across the street from the entrance of the Temple of the City God, possibly next to the 'spirit wall' (if it was even there back in the day): 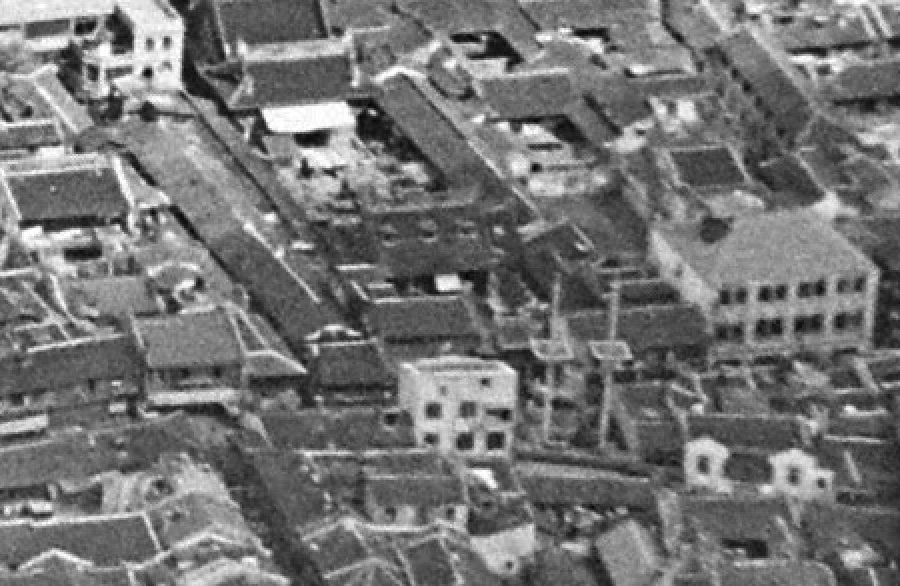 Let's get out of the old town for the last close-up. Here is Poste de Police Mallet, seen at the upper left of the main image: 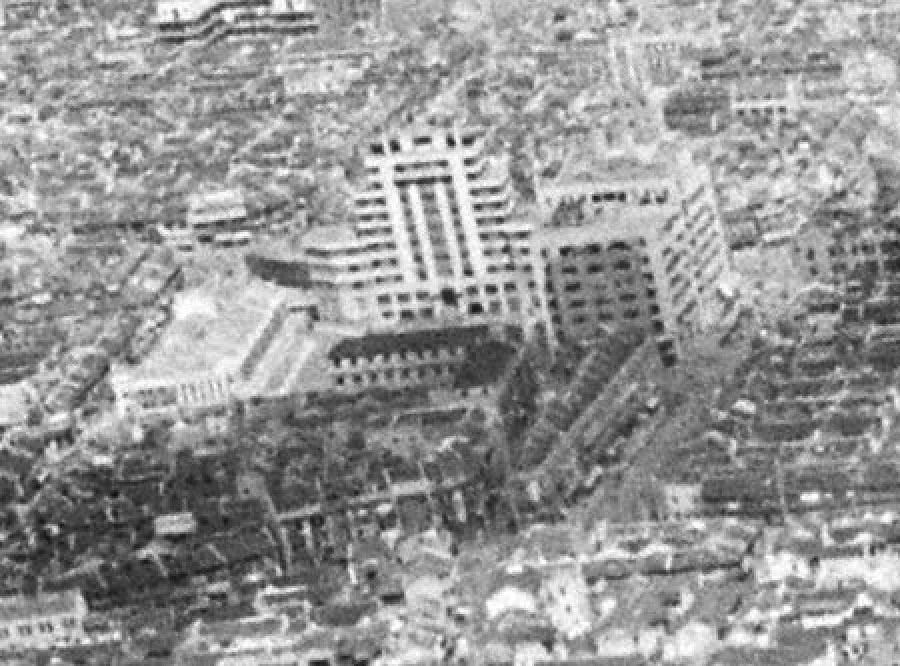 There are more great aerials in this series: the central business district, the northern part of it, the Bund from across the river and the mouth of the Suzhou Creek.