Continuing to look at John Thomson's photographs of Shanghai, one of which was discussed in the previous post.

These two photos from around 1890 have always intrigued me. They are captioned 'Public Gardens, Shanghai,' but clearly this is not the Public Garden at the north end of the Bund: 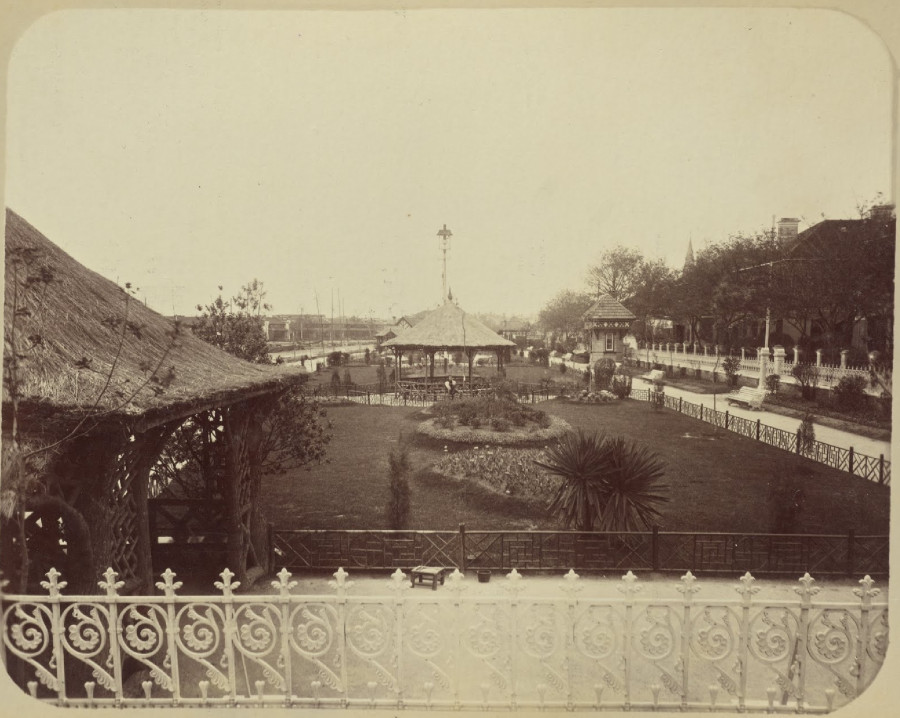 A church spire is visible on the right, in the distance. And in the center, behind the thatched gazebo, a low building with characteristic timber structure resembles the Rowing Club. There are also boat masts in the distance.

The elegant geometric fence in the second picture is the same as in the first one, so this has to be the same park. The griffin sculpture is so cool, and it has a sundial on its head. The row of Chinese houses in the distance appears to be separated from the park by a stretch of water, and there are several boats moored on the left: 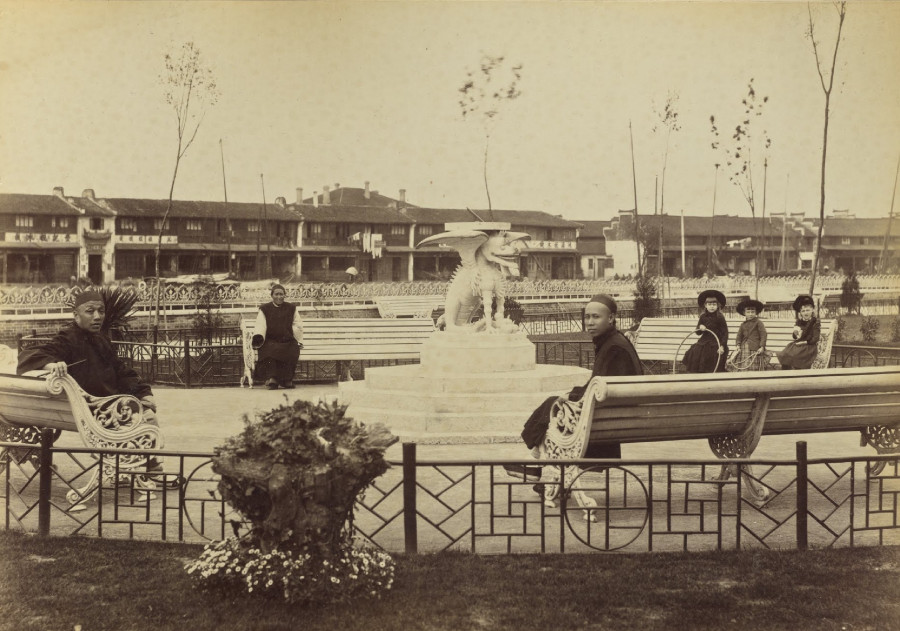 [Continue reading...]
Then I found this map and it confirmed the location of the park on the photographs: the southern bank of Suzhou Creek, between Szechuen (Sichuan) Road 四川中路 and Museum (Huqiu) Road 虎丘路. Then the church spire in the top photo belongs to the Union Church, behind the British Consulate, and the pitched gable in the distance has to be the Rowing Club: 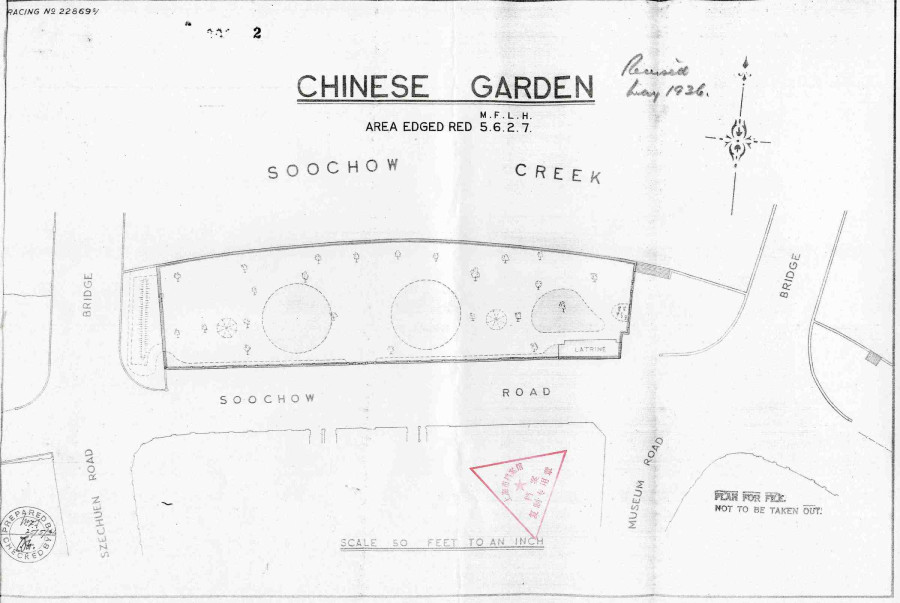 So this is the infamous Chinese Garden 华人公园! It was set up by the Municipal Council in December 1890 in response to the foreigners' complaints that there were too many Chinese in the Public Garden on the Bund. The SMC Report for the year 1890 describes the new park, prudently named the New Public Garden:

The New Public Garden apparently succeeded in pacifying the Chinese protests about the inequal treatment by the foreign authorities, but evidently the name did not stick, because all sources refer to the park as "Chinese Garden.' According to this article, 'few of the well-dressed Chinese elite, and few foreigners, ventured past the gates of the Chinese Garden where members of the lower classes of Chinese society would congregate in great numbers.' Another research says 'the Chinese garden was largely the resort of “the coolie class who monopolized it and consequently the better class did not frequent it to any great extent.”'

Interestingly, Thomson's photographs, taken some time after 1893, paint a rather serene picture: the garden seems deserted, and well-dressed Chinese and Western visitors are quietly sitting on the benches. Another image, from the Shanghai Archives, also shows this park as peaceful and not-so-intimidating: 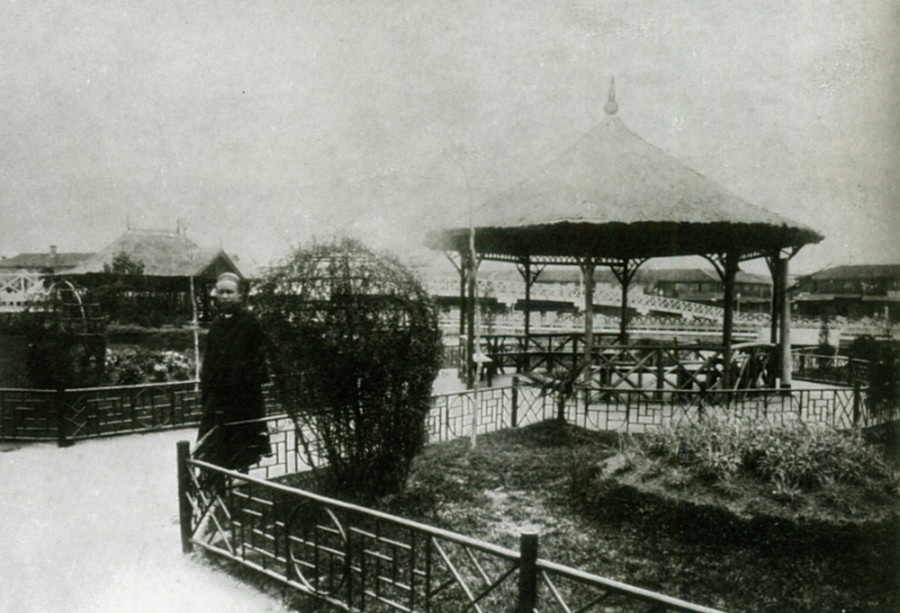 Montalto de Jesus' History of Shanghai offers an interesting piece of trivia about the site of this park: 'Along the Soochow Creek, at the site of the present Chinese Garden, stood a villa known as Siu Wending's Library, in a peach garden with rockeries, arcades, and ponds surrounded by a hedge of cypress.' Siu Wending is another name for Xu Guangqi, Shanghai's celebrity scholar from the late Ming era. With all respect to Montalto de Jesus, I have not found any supporting data about this library.

Here is another photo of the griffin on the pedestal, by an unknown photographer, taken in the 1900s. Behind the griffin, on the north bank of Suzhou Creek, is the General Hospital that had relocated there in 1875: 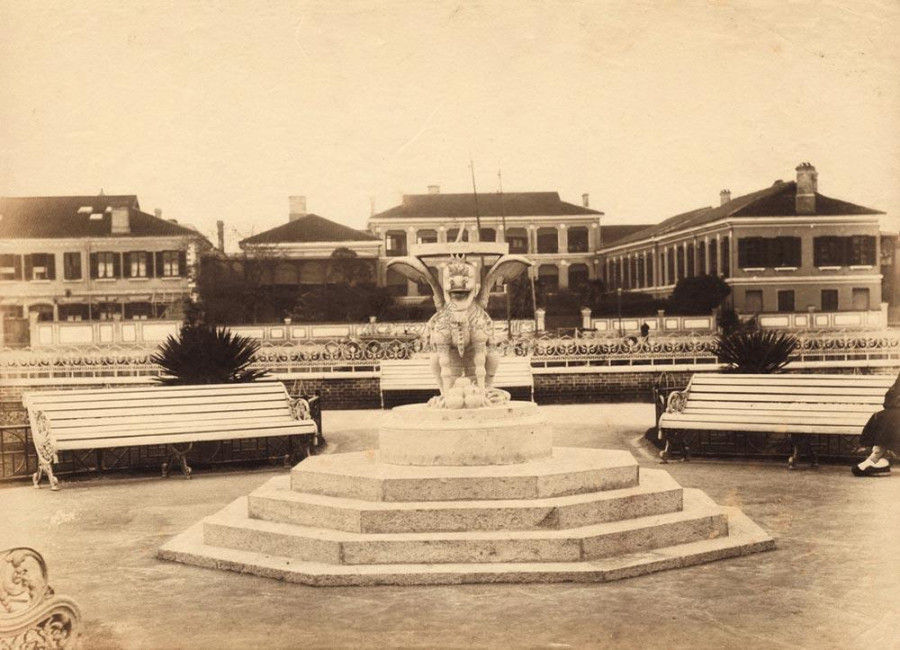 The dragon-like griffin is capable of supporting not only a sundial but also a toddler: Two years into the new garden's operation, the SMC report from early 1893 confirms that the garden has been a success, but suggests to replace flimsy bamboo fences around the flower beds with iron ones, against 'rough usage.' Presumably, this modification has been implemented, because Thomson's photos show iron rails: 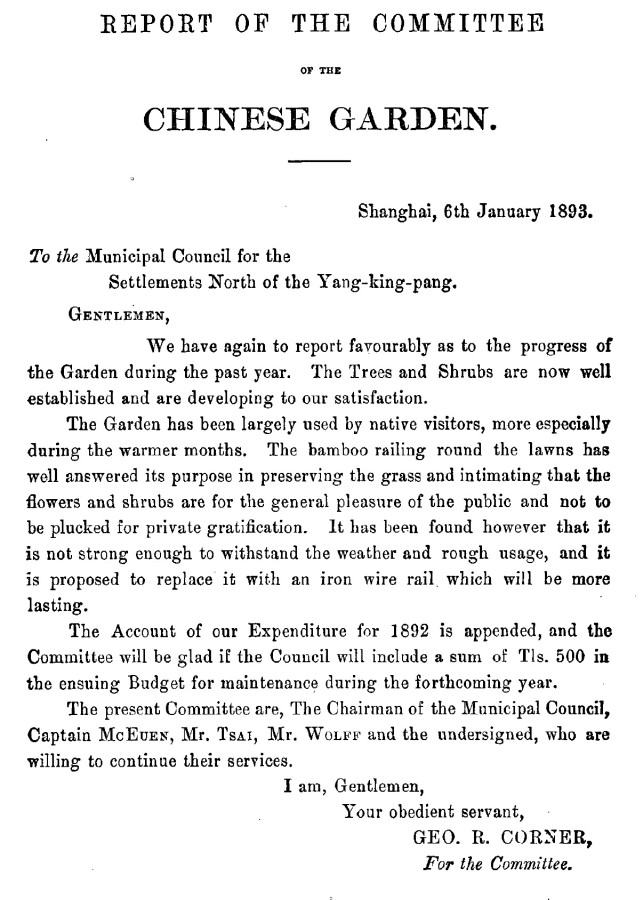 The following photo from the 1900s–1920s, taken from the Zhapu Bridge towards the Sichuan Road Bridge, shows the hospital buildings on the right and the edge of the park on the left:

What happened to the garden in the twentieth century? This 1927 aerial faintly shows its outlines: 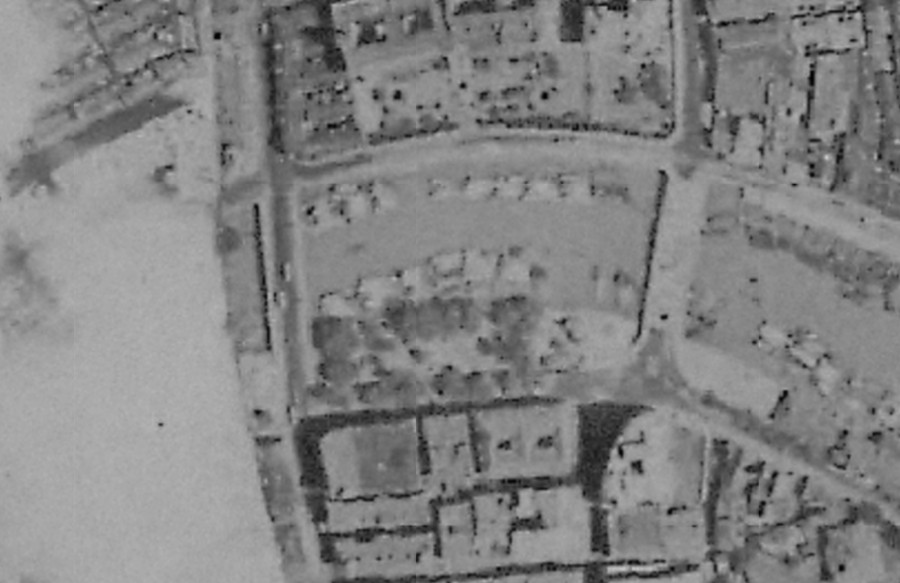 This high angle shot from 1932 shows the garden in a good state: But this image from 1937 shows the park looking quite barren (or maybe it's just winter): Here is the highest resolution of the park ever possible, in 1937. Click to zoom!

Cropped from an image at Le croiseur Lamotte.

Here the edge of the park and numerous boats moored at the embankment are photographed by a Japanese military photographer after the onset of the occupation in late 1937: 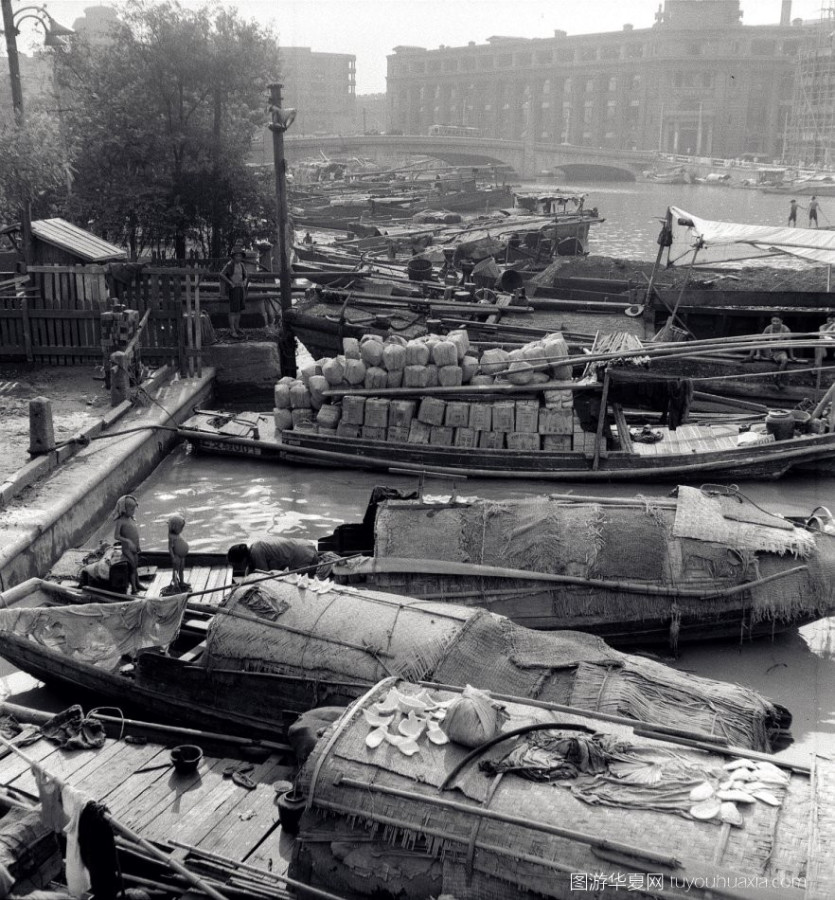 A very similar photo, looking down from the Museum Road bridge, was taken by Harrison Forman during the occupation. It shows the edge of the park on the left: Here is another photo by Forman, looking east from Sichuan Road Bridge. One can see carefully pruned plane trees on the right: This photo, dated by the 1940s, shows the park looking fresh again: This 1948 aerial shows some trees, but the decorative pavilions and flowerbeds are gone. The ground is covered with either stacks of cargo or rolled-up mats used as shacks (滚地龙). The onset of the occupation and the bombing of Zhabei, probably, cancelled out the recreational function of the park: 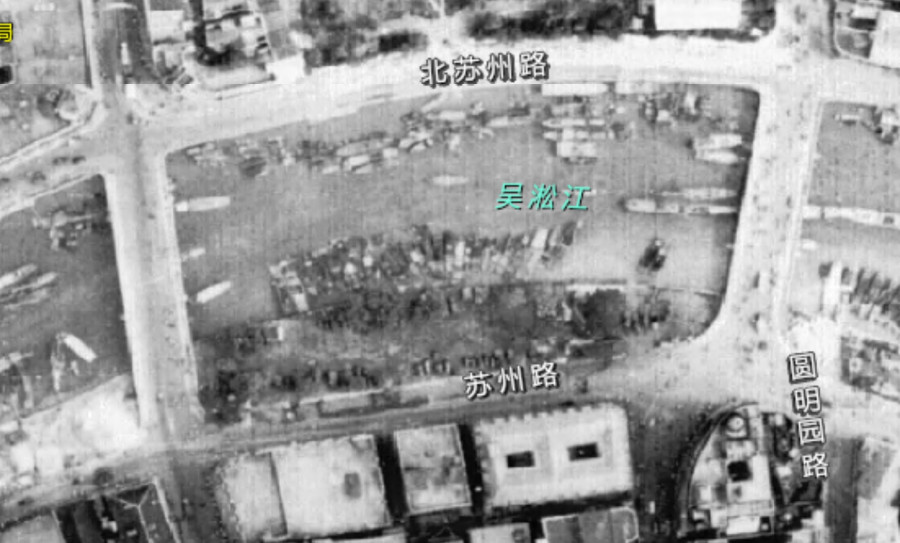 This postcard from 1958 or 1959 shows the park looking healthy again, with the British American Tobacco and Capitol buildings behind it: 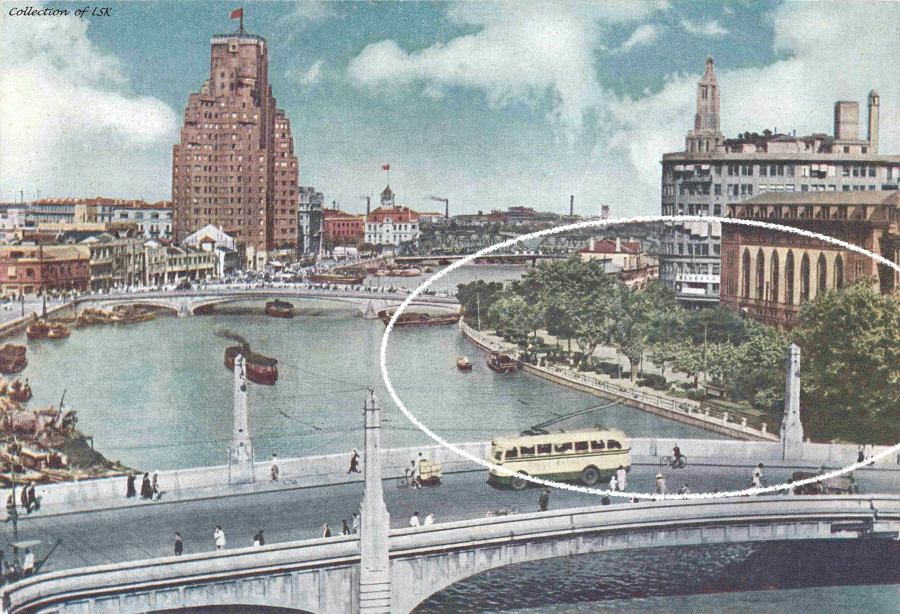 In 1973 Harrison Forman revisited Shanghai. The park is seen in his skyview shot from a high floor in the Broadway Mansions: A close-up from another photo in this 1973 series: In 1963 the former Chinese Garden was downgraded to the status of a green space, and now it is a vapid landscaped lawn with a gas station: 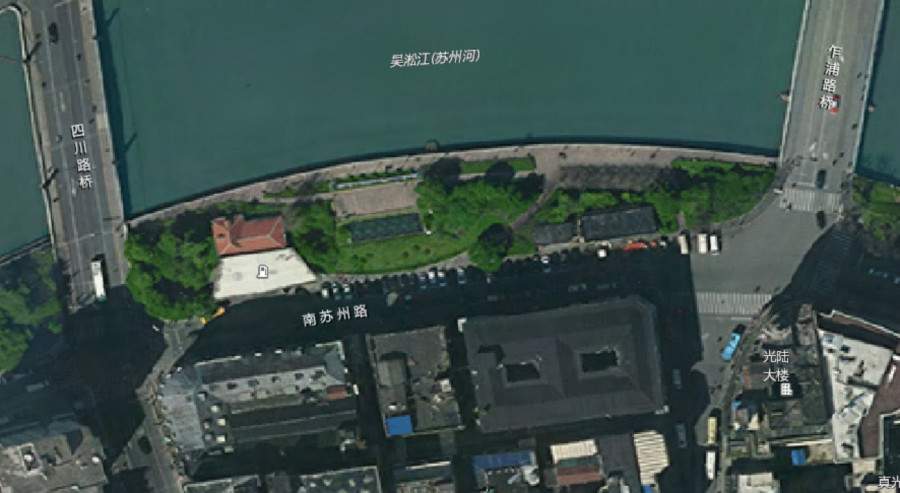