You'll never find the name of Boris Krivoss (pronounced Kreevosh) on heritage plaques, although many of his buildings still grace the streets of Shanghai. He was one of those architects, builders and landlords, whose entrepreneurialism drove the building boom of the 1930s. I'd love to attach his name to the multiple villas and apartment houses that he built. I've identified 7 surviving buildings so far and keep looking for others.

'Boris Vladimirovich Krivoss, based in Shanghai since 1921. He founded his architecture firm in 1925. Active in construction and real estate.' (From Zhiganov's Russians in Shanghai.) 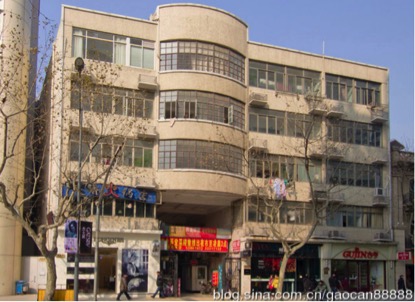 Built in 1922 (according to the Chinese internet), but the ads for this commercial complex begin to appear in the press in 1935. Joffre Arcade consisted of a five-story apartment building 飞龙大楼 (once considered one of the 'high rises' of Avenue Joffre, along with Bearn Apartments and Young Apartments). The arch in the building led to a courtyard where four small blocks of commercial properties and more apartments were located. 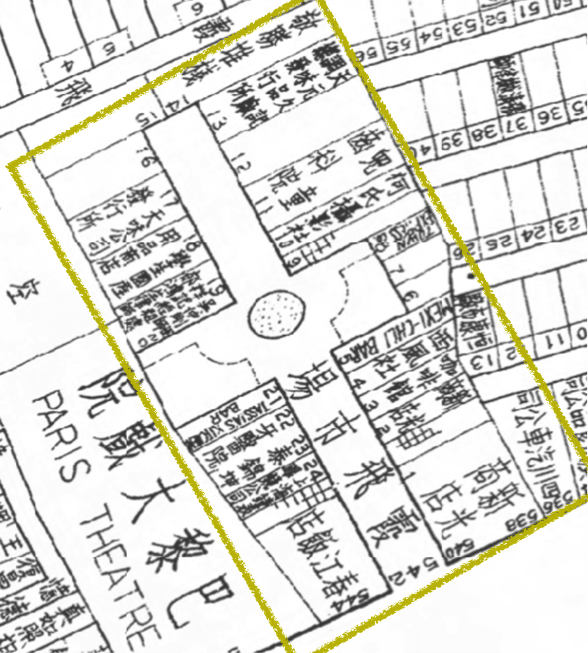 Russian merchants turned the Joffre Arcade into a veritable 'Russian bazaar.' Multiple beauty salons, hairdressers, tailors, clinics and cafes were located here. (The 1939 map above does not fully reflect the composition of the complex in its heyday). 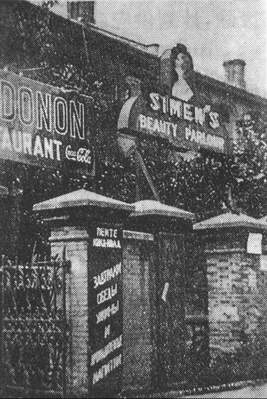 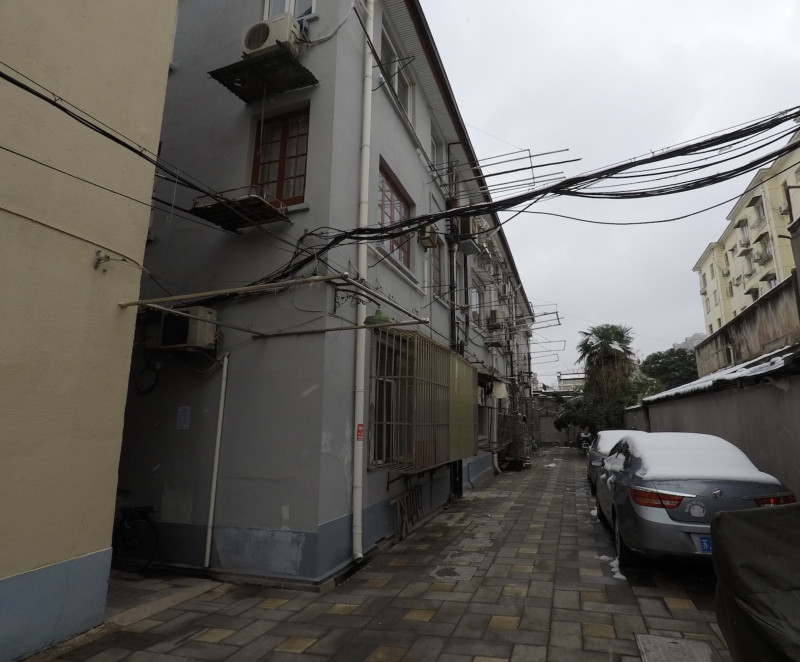 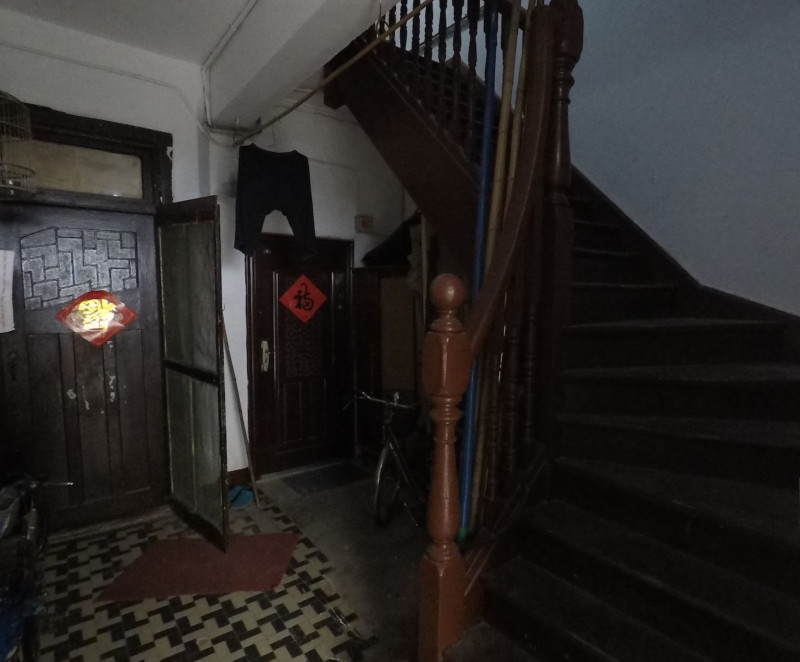 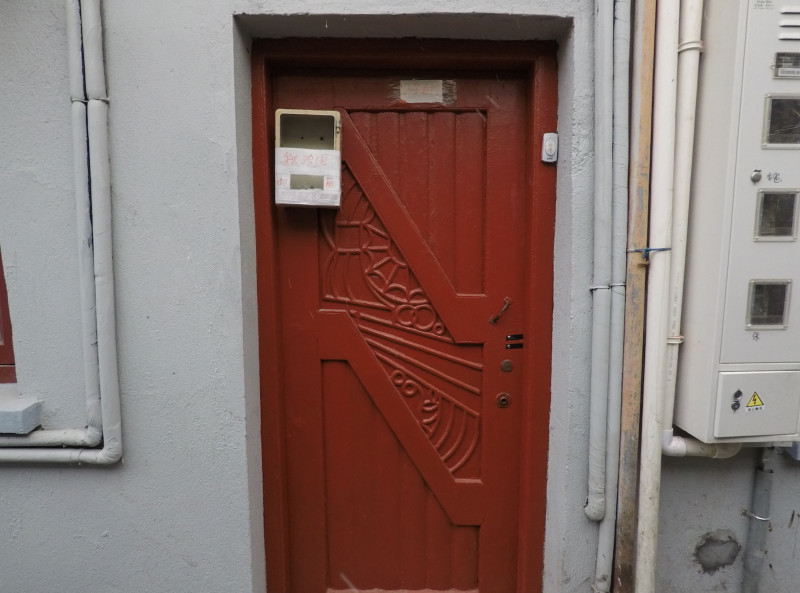 Many thanks to Olga Merekina for these photographs! The building has some beautiful art-deco ornamentation on the exterior and interior doors.

Krivoss's company owned most of the buildings inside the lane 275, and he rented them out. One of them had '6 rooms, 2 modern bathrooms, large kitchen, servants' quarters' and potentially a garage. A small apartment house turned at an angle to the street, built in 1931 (or earlier). It also had to change its name once. Initially, Krivoss named this building after himself, Krivoss Apartments, but later changed his mind, and his last name went to his other project (see p. 4 below), while this one became Western Apartments.

4. Krivoss Apartments, 1333 Middle Huaihai Road. A string of renovations left this building so faceless that for years I presumed it was new. But the maps confirm: this is Krivoss Apartments. For several years Krivoss's office was located in a villa in front of the building, until it was demolished some time in the 1990s. Boris Krivoss and his wife lived in Krivoss Apartments, in the penthouse. 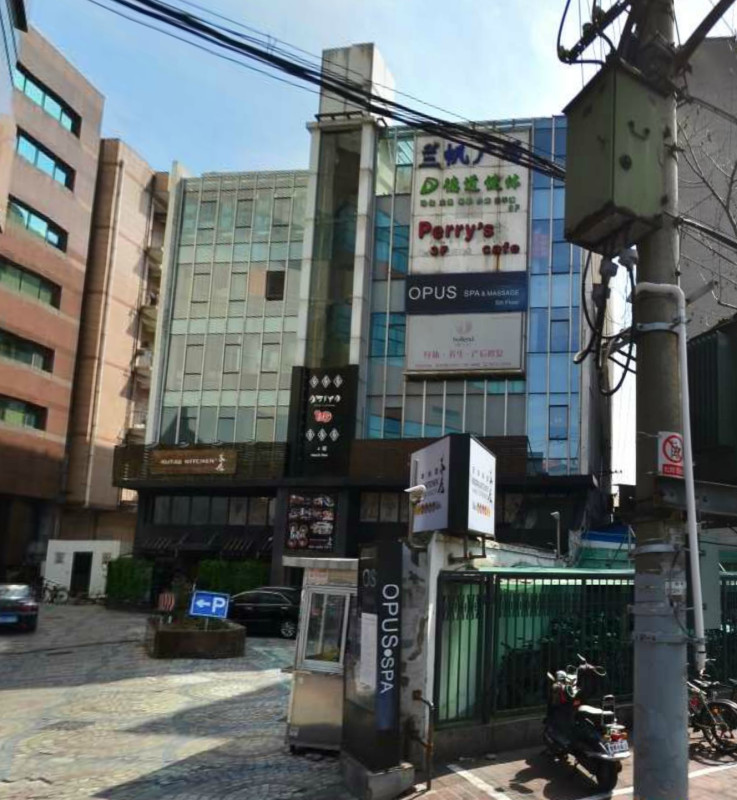 In the late 2000s the building housed a restaurant that served Sichuan-flavored dishes made exclusively of rabbit meat. Everything was insanely spicy and completely delicious. But the restaurant was unpopular and went out of business pretty soon.

5. Tiny Apartments, 78–86 Route Grouchy, built in 1929 or 1930. This street was a predominantly Russian territory, and in all years the tenants of this small apartment house were Russians. 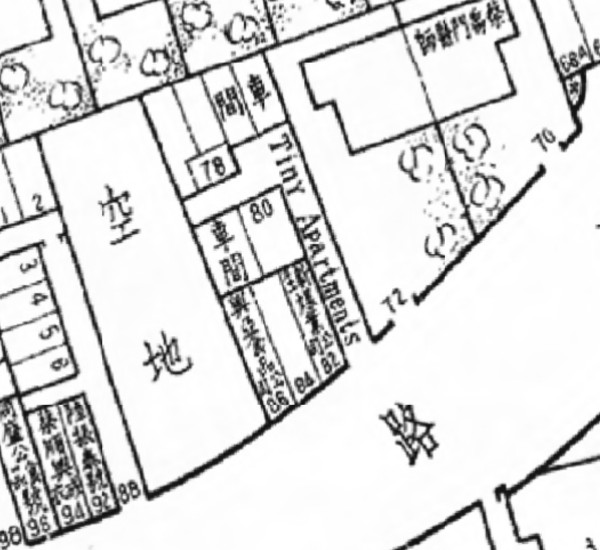 6. Nesthouse Apartments 巢居公寓, Nanyang Road, built in 1932. This is one of the larger apartment houses authored by Krivoss. It even received an anticipatory writeup in local newspapers. The flats had either two or three rooms, 'each flat containing a large bath and refrigerator, in addition to the kitchen equipment, lighting, etc.' The building had central heating. 'It is finished in artificial marble inside, wich facing brick on the outside.' The flats had suspended ceilings to reduce heat in summer, while 'floor slabs are both heat- and sound-proof.' (The China Press, July 1932.) 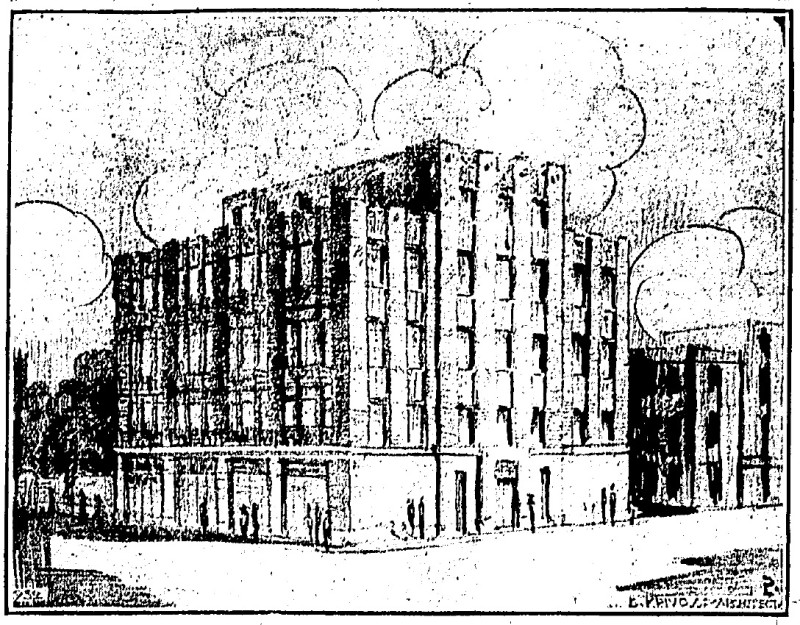 'The new apartment building, now being erected on Nanyang Road, which will be completed sometime in November. It will contain 12 modern flats, equipped in the most up to date manner, and has a rather modernistic style of architecture inside and out. The firm of B. Krivoss designed and is constructing the building.' (The China Press, July 1932.) 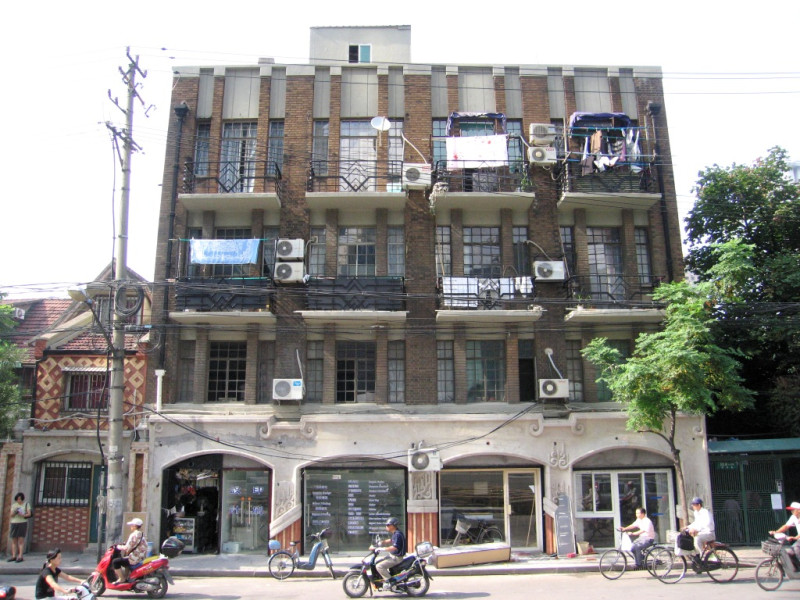 This facade corersponds to the left side of the building on the drawing above. Photo by John Meckley. 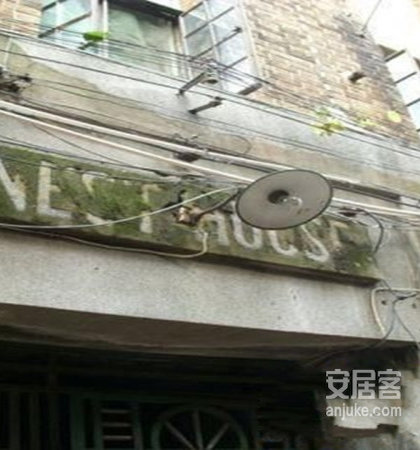 Half-erased lettering above the entrance Photo from the real estate site. 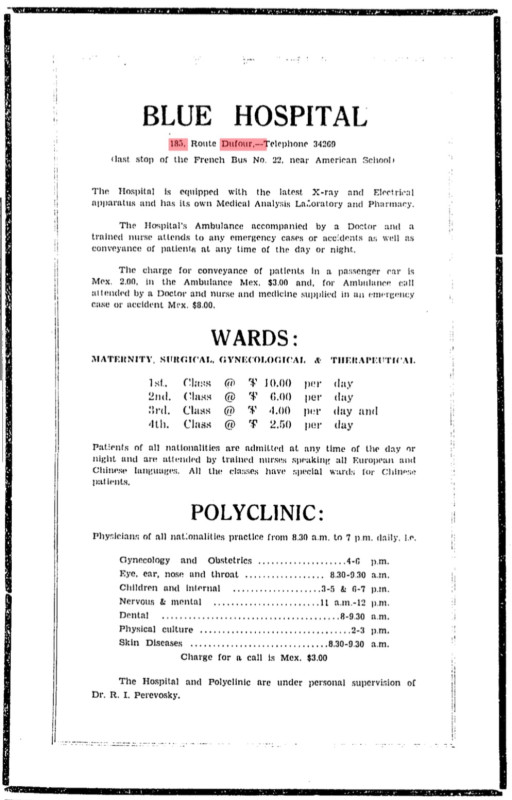 The hospital operated by the Russian doctor Mrs. Perevosky from Harbin had a very brief life. It opened in 1930 with a lot of pomp in the press, but two years later it was in debt and had to be auctioned off. In 1933 the building became a residence, which still stands. 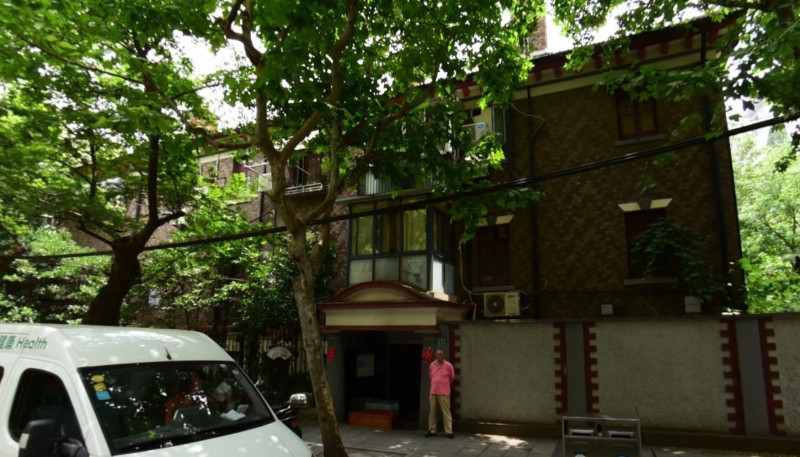 Krivoss would buy lots in central French Concession, build properties on them, move his office into his latest creation to use as a showroom, sell the house or rent it out, and then move on. His office changed its address practically every year.

In 1928 he built a handsome villa at the corner of Avenue Haig and Route de Say-Zoong (where Hilton stands now) and moved his office there. 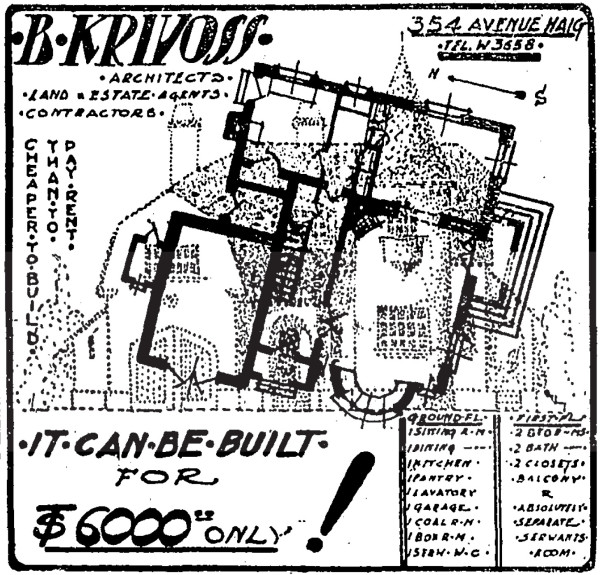 Later that year, his office moved to another showcase villa, on Route de Zikawei (Zhaojiabang Road): 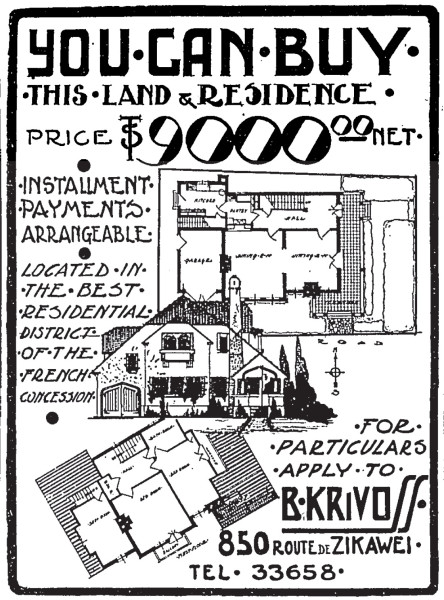 'You can buy this land & residence. Located in the best residential district of the French Concession. Price 9000 taels net.' The China Press, Aug 1928.

In 1929 he relocated to a storefront on Avenue Joffre, and in 1930 his office was on Sichuan Road. 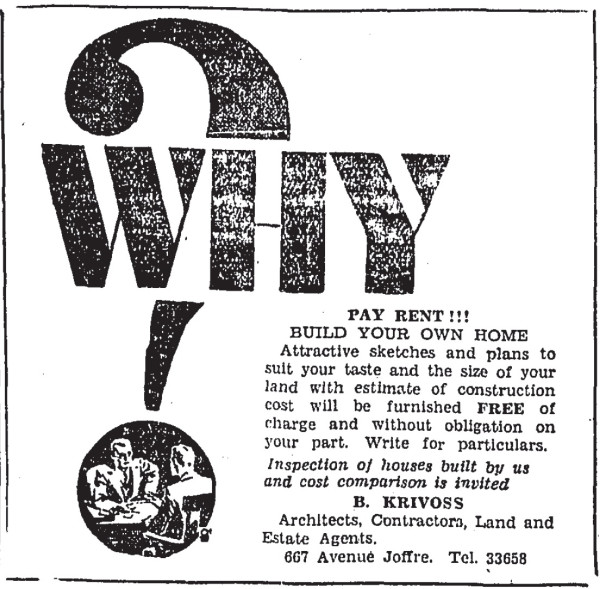 'Why pay rent? Build your own home.' Krivoss' company ad in September 1929.

Having reached quite a renown and wealth, Boris Krivoss and his wife went on a world cruise. Upon their return to Shanghai he shared his impressions of the trip with local journalists. He liked Hollywood: 'Some say it is garish and ornate. I think it is marvelously planned and an excellent place to live.' He disliked the garbage in the streets of New York. He loved the skyscrapers and lamented the 'mucky and soft' quality of Shanghai soil. Czechoslovakia, the land of his ancestors, made him nostalgic. In conclusion, he said: 'I'm glad to be back in Shanghai, just the same. I consider it my home, and here are all my friends and business associates. I've seen Shanghai grow, and it has a big future. Sorry I missed the war (the Sino-Japanese conflict of 1932 – KK). There is apparently a great amount of work for everybody in Chapei.' (The China Press, July 1932.)