The documentary 'China on Film' is wonderful. I particularly liked the 'zoom-enhance' sequence, where the archivist demonstrates how he used historic images of Nanjing Road to find out where the 1900s footage was taken: 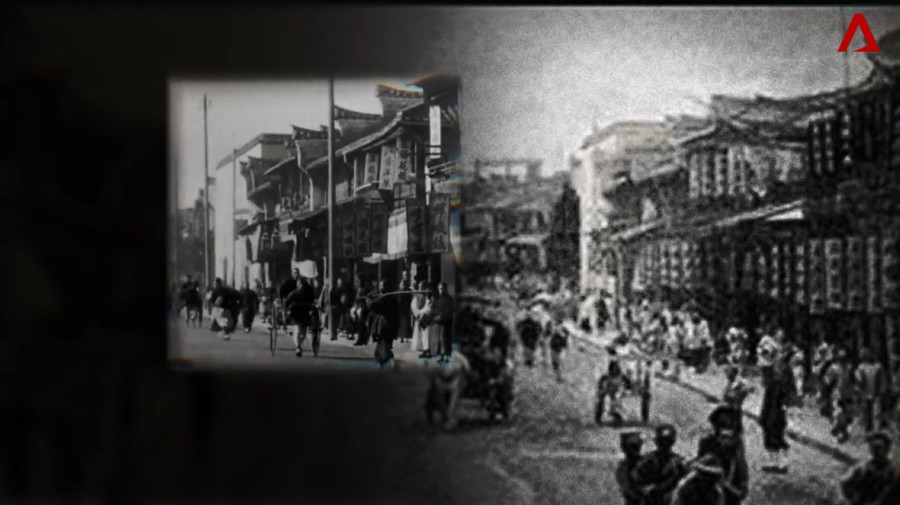 Still from China on Film.

Having identified the white storefront as Shaowansheng 邵万生 food store, the voiceover goes: 'Same location, same building, rebuilt in the 1930s,' and the camera zooms in on 414 East Nanjing Road 南京东路414号. 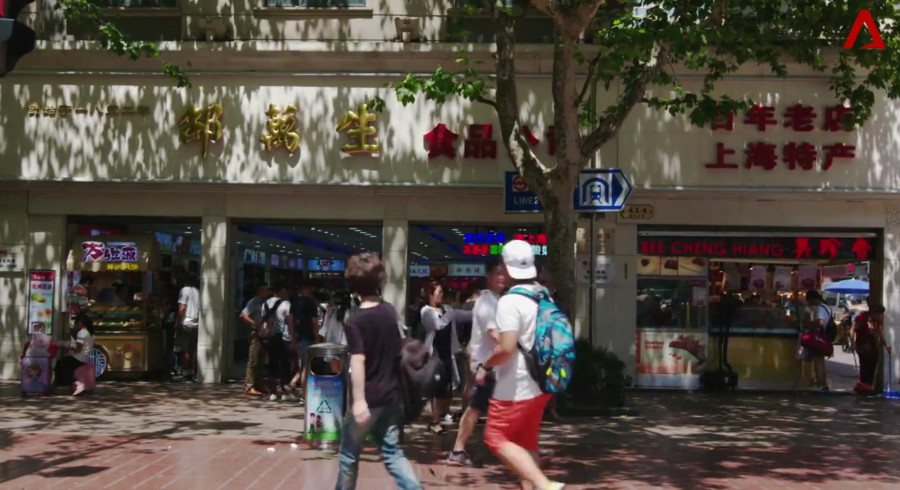 [But they got it wrong...]
Since its opening in 1852 the Shaowansheng 邵万生 store moved around Nanjing Road two or three times. How do we know where it was in 1901? Most early images show its recognizable white facade surrounded by a completely strange streetscape that gradually disappeared in the 1920s.

One thing is clear immediately: the store is not near the corner of Shanxi Road, where it stands today, because there is an uninterrupted row of buildings to its right: 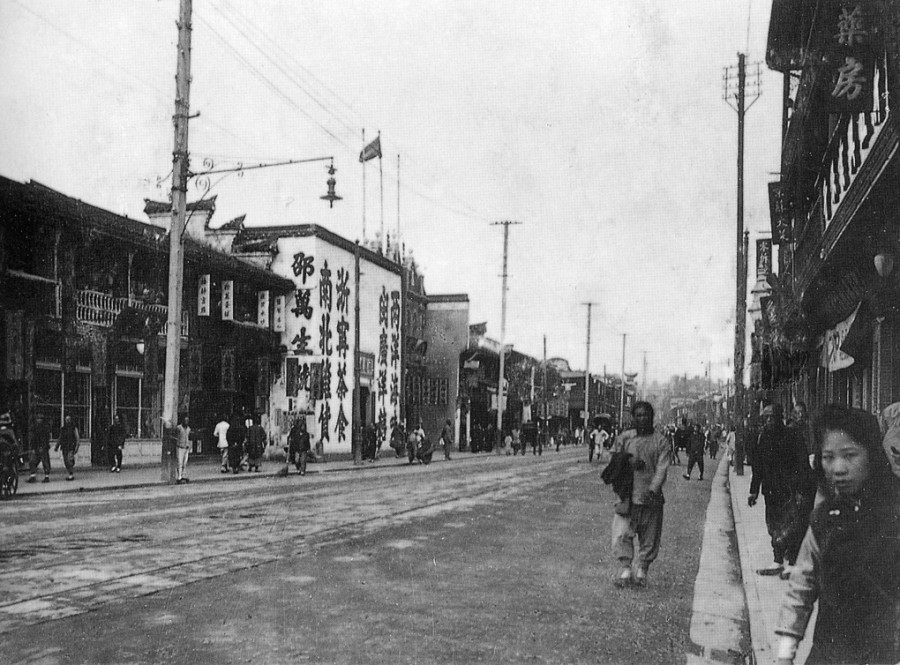 Fortunately, Nanjing Road was photographed a lot, especially that section of it. Some pictures show the gradual replacement of old Chinese buildings with neobaroque edifices. Thanks to this postcard we know that Shanxi Road is somewhere near. We also learn what the two buildings to the right of the store started to look like after they were rebuilt: 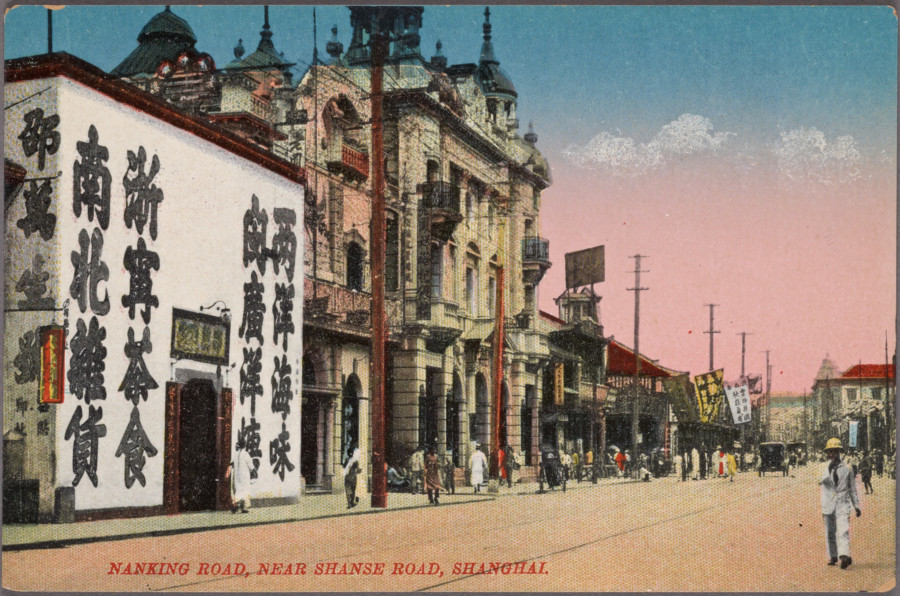 And what is the building to the right of Laofengxiang?

It appears on the photo below, taken in 1925 from slightly further away. The facade spells Laou Kiu Chang (Laojiuzhang) 老久章 textile store: 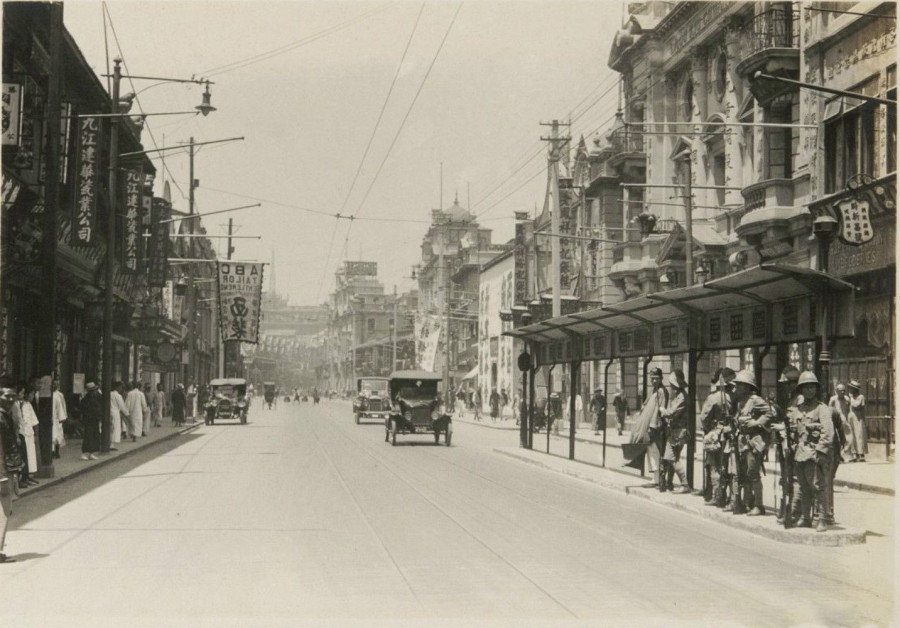 We are getting closer to the corner of Shanxi Road. The building to the right of Laojiuzhang, at the right edge of the photo, corresponds to today's No. 414, but the sign on it spells 'EMBROIDERIES.' So by the year 1925 Shaowansheng had not yet moved to this address, and it could not have been there in 1901. 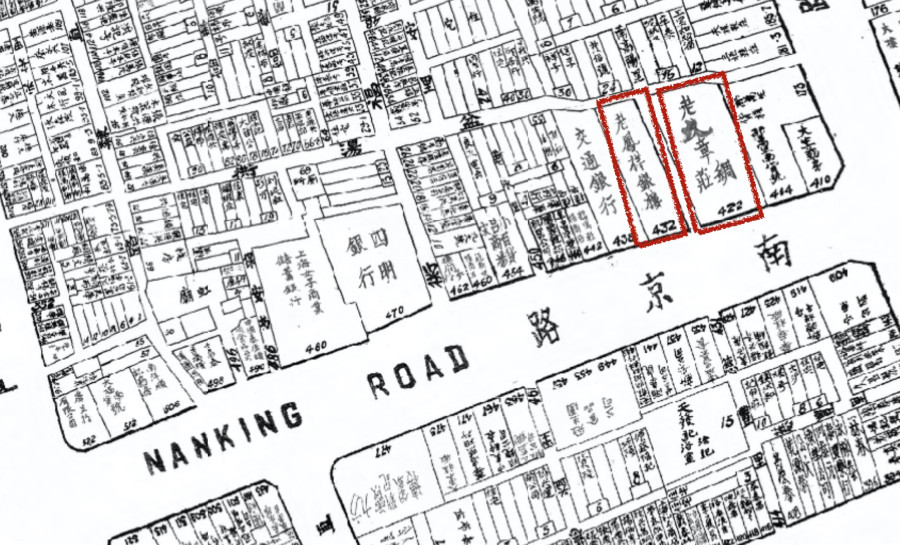 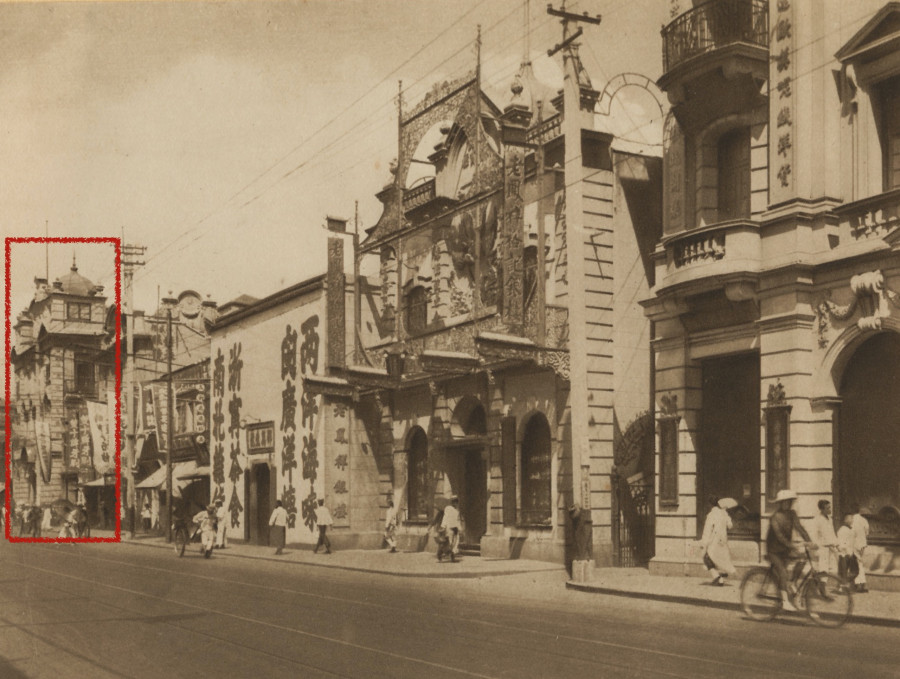 There it is, closer up. The signage is very helpful. 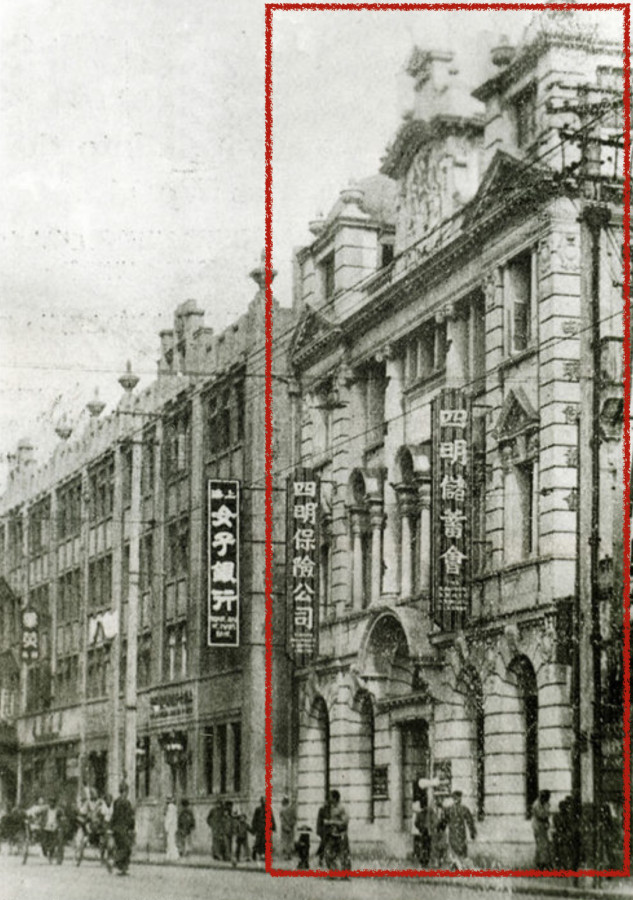 This is the Siming Bank 四明银行, right next to the Women's Bank 女子银行. Both of them appear on the map: 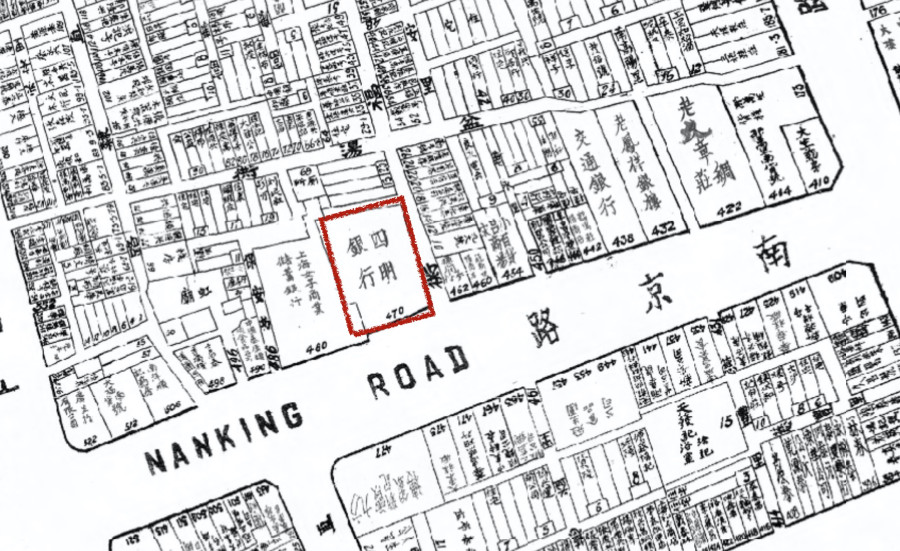 To avoid confusion, I made an (ugly) sketch to 'rebuild' the streetscape, highlighting on the most prominent architectural features of the facades. 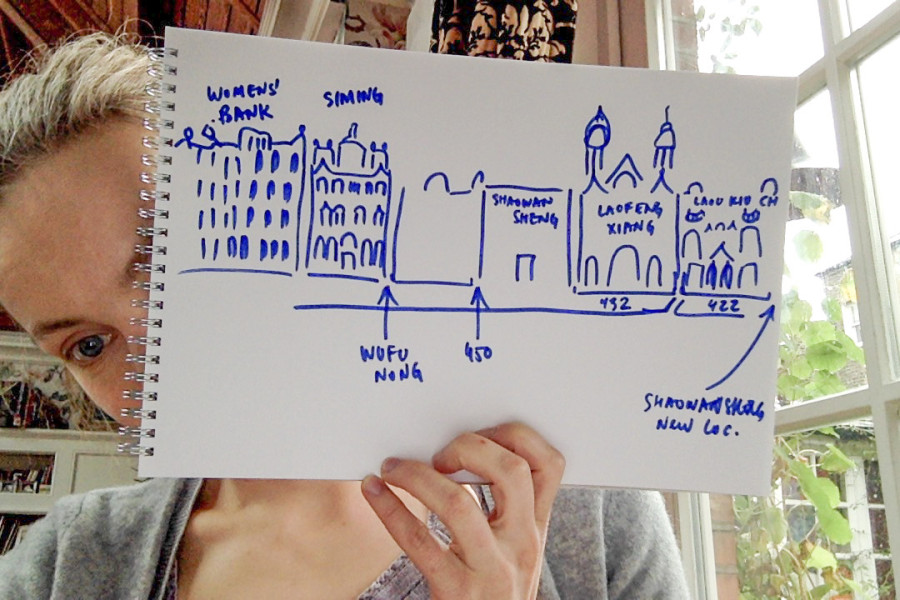 Forgive me, Cintia, I am so bad at architectural drawing.

So here is the real location of the Shaowansheng 邵万生 store captured on film in 1901: near the center of the block between Shanxi Road and Fujian Road, at Nos. 442–446, and not at No. 414 where the store is now: 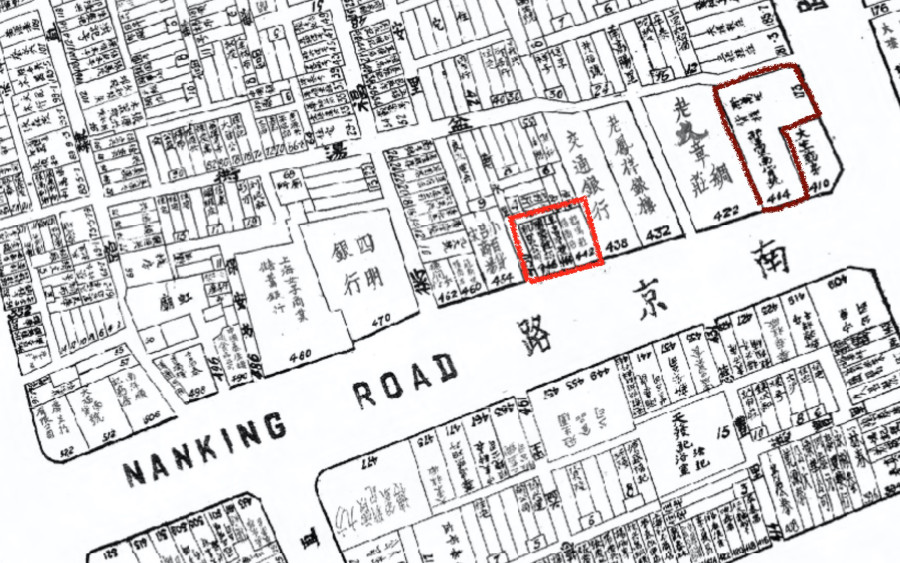 This image shows the Shaowansheng 邵万生 food store at its new location, at No. 414. Bits of acrhitectural features at the left edge of the photo belong to the Laojiuzhang 老久章 store. 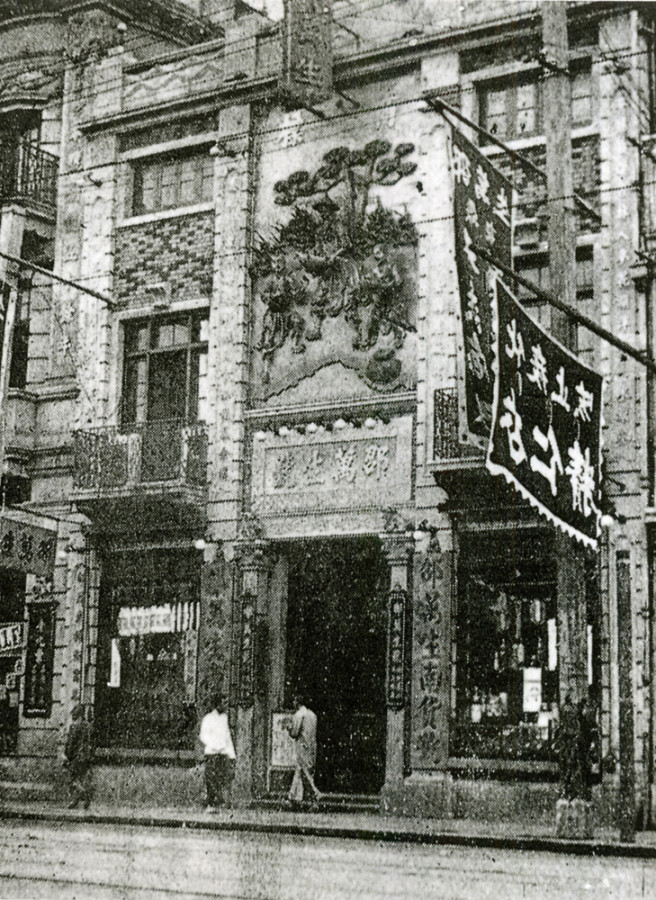 To sum it up, the BFI archivists and technicians did a marvelous job matching the old footage with still images of Nanjing Road and identifying the store, but could not precisely locate it, because they are not as crazy as I am due to the lack of China expertise.