Looking at the immense archive of Jack Birns' photos taken in Shanghai in 1948–1949, one cannot help but reconstruct his journeys in Shanghai, his walks in the streets, observing the pedestrians, vendors and people engaged in traffic – bicyclists, rickshaw pullers, dockworkers, beggars. One cannot help but see sequences taken on the same day, within minites from each other.

Besides capturing eventful moments, like the cotton mill riot, the taxi dancers' riot, the executions of Chinese communists, the departures of Russian emigrants, he also wandered in the streets a lot.

One day he stumbled on a colorful funeral procession. Thanks to the fragments of the store signage, we know the participants are passing the Auto Palace on Route Bourgeat, moving toward the Lyceum Theatre. Moving parallel to the procession at a little distance from it, the photographer captured the decorated car, the covered coffin, the back end of the shrine. Birns spent a lot of time with girls, including Russian expatriates, and they happily posed for him in the streets, in cafes and inside their homes. This could be a topic of a whole another post, so I will not go into detail here. There is a also this wonderful book on his work, Assignment Shanghai, that I cannot consult at the moment, though I own it. BTW, Jack Birns was Russian!

I've known the following sequence of images for a long time, having identified the location a long time ago. These are the only known pictures of the entrance to Linda Terrace, the Russian-populated compound on 833 Avenue Joffre. Yesterday I realised there are recurring characters that link the whole series of shots taken at the southern edge of Avenue Joffre, in the central blocks of the French Concession. First the photographer captured a meeting of couple of girls at the entrance to Linda Terrace, and then he followed them to the end ot the block and photographed them from inside one of the stores. I wonder if he asked them to wait and help create the shot, or he was swift enough to do this without revealing he was stalking them? I would guess the former, since he was a charming individual and easily established contact with his subjects. 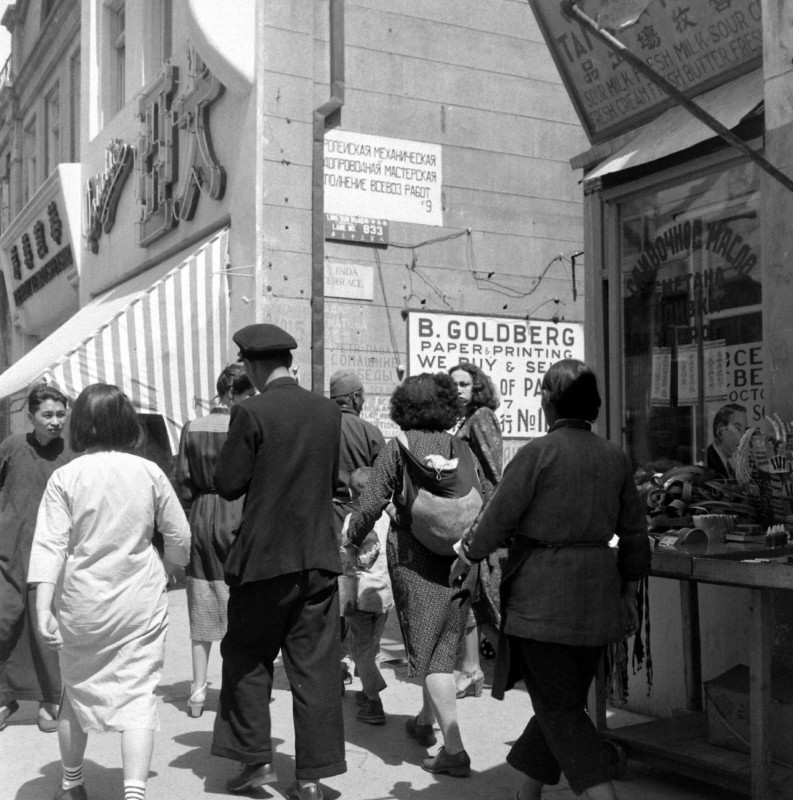 Here the subjects are obscured by pedestrians. The girl in a patterned two-piece is walking out of Linda Terrace, looking in the direction of the photographer. The other girl, her back to us, is mostly obscured by a tall man in a dark suit and a cap. This girl is the only onw standing still in a dense flow of pedestrian traffic, so I suspect the two are planning the next shot. 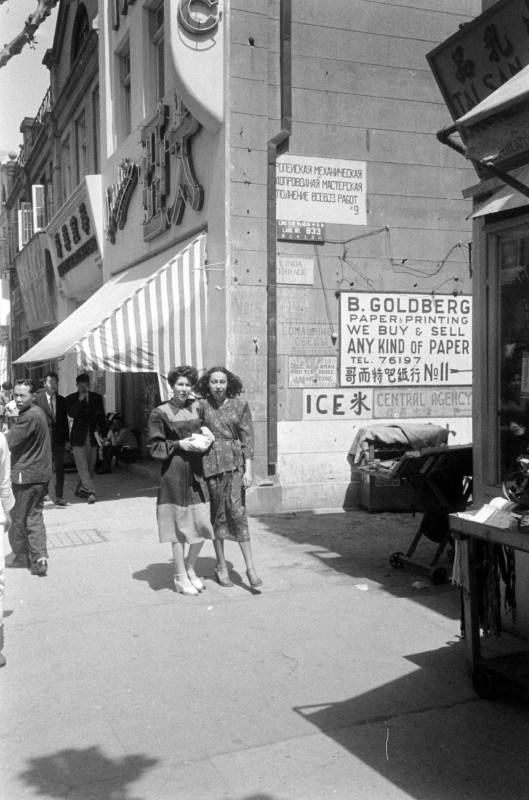 For this image, the photographer waited for an opening in the crowd, while his subjects patiently waited, seemingly giggling. Or maybe, they spotted each other at the entrance of the compound and proceeded along the street, unaware of the photographer. Here the subjects are looking into the store display, which seems a little posed.