After I posted this little article I received updates and corrections from people with family connections to the restaurants mentioned here: namely, Alla Verdy, Astoria and Renaissance. I am overwhelmed with excitement and gratitiude! This is much more than I hoped for when I made this list (to keep track of what I know so far). I am adding the updates and extra info into the body of the text.

Browsing LIFE archives on Google inspired me to compile a shortlist of restaurants operated and patronized by Shanghai Russians in the '20s, '30s and '40s. 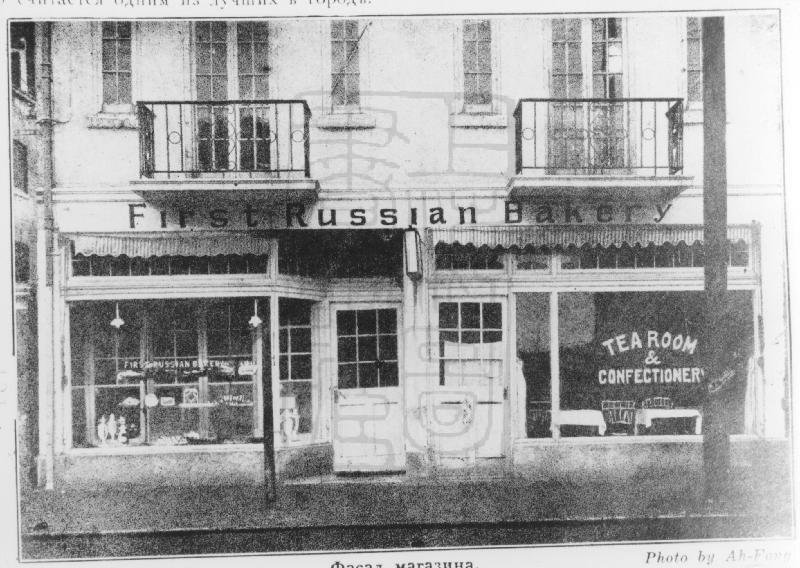 ALLA VERDY
Alla Verdy was a popular restaurant in the 1920s. The name comes from Caucasus and means "passing the toast to the next person." I haven't yet found the restaurant's location. The restaurant was run by the Russian Armenian emigrant Enoch Sarkissian and the Georgian expatriate Joseph Nozadze (thanks to Nona for this update). Alla Verdy is mentioned in Mikhail Tscherbakoff's short fiction story The European Man, published in 1926:

[the White Russian girl] Lola tried to hide her tension and shook her curls: "Not now, Marcel. Let's go to Alla Verdy. It's cozy there. I want to get drunk."

[...]They saw two expensive cars already parked outside the small unkempt bulding occupied by the restaurant. The wasp-waisted host in a traditional Armenian long coat appeared from the smoke-filled entrance. His thin moustache seemed sketched on his face with a piece of charcoal.

The guests were taken to the best room. There was nothing there except a table, a wide bench covered with a thick Bukhara carpet hanging from the wall, and an old broken piano. But the memory of the maze of filthy streets leading to the place made this arrangement seem cozy.

This bar, despite its shabbiness, somehow resembled old Petersburg – not its solemn palaces and embankments, but its small subterranean grill-bars. The cover of the tattered score book on the piano had a Russian family crest and a monogram.

There was a knock on the door, and the pianist walked in. He was unshaven and looked pathetic and consumptive. One of his dirty white socks has gathered at his ankle and was resting on his shoe. His jacket was too short and its gaping collar revealed the absence of a shirt. He exclaimed: "Bonjour, s’il vous plait!" bowed and dragged his foot." 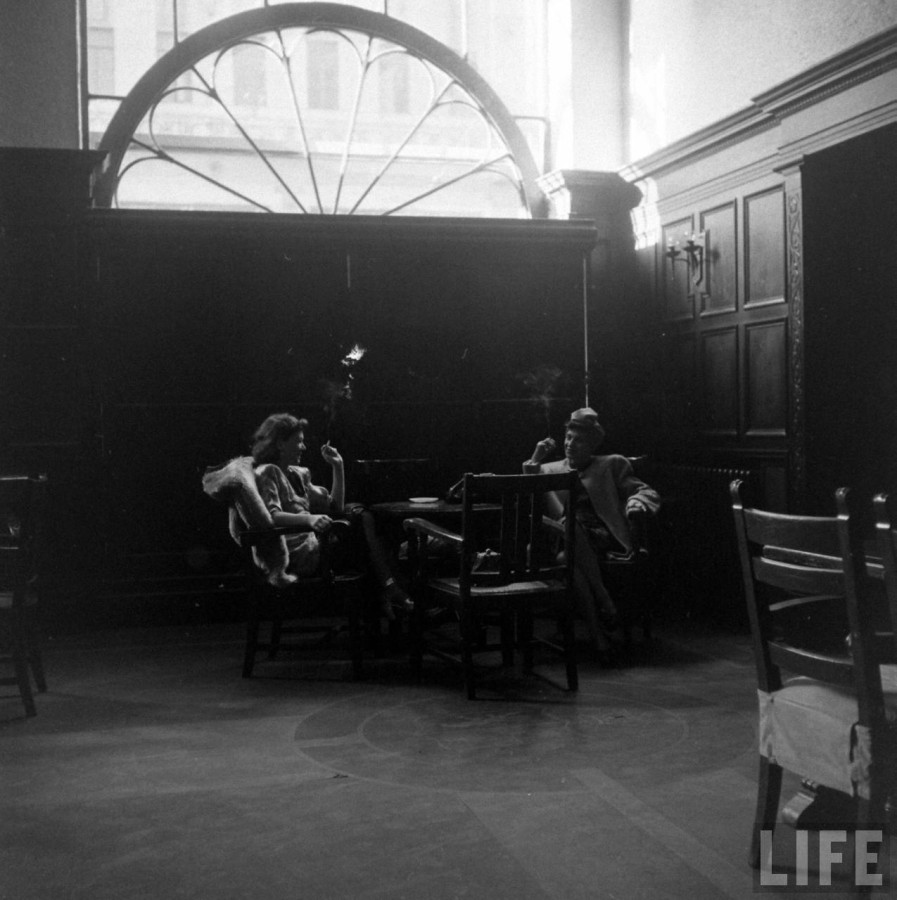 KAVKAZ
This was another old-timer from the 1920s, before the wave of Harbin emigration. Originally it was located on Range Road, then moved to the prestigious Avenue Joffre, between the Estrella Apartments and the offices of Shanghai Dawn newspaper.

This ad from 1925 or 1927 reads: "Why be bored? Come tonight to Kavkaz. 86 Range Road. Snacks, drinks, music. Open-air pavilions and private rooms. Best cuisine in Shanghai." 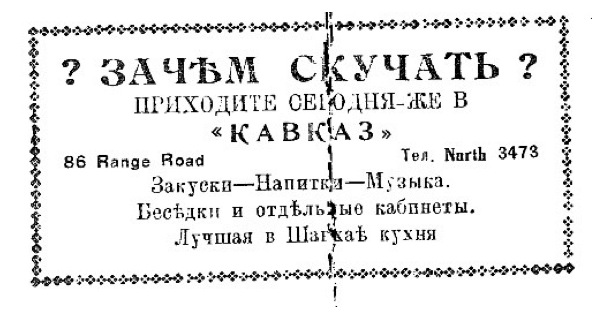 In 1931 Kavkaz was found at 1240 Avenue Lafayette. It must be this location that got to be represented in Jiganoff's album Russians in Shanghai: 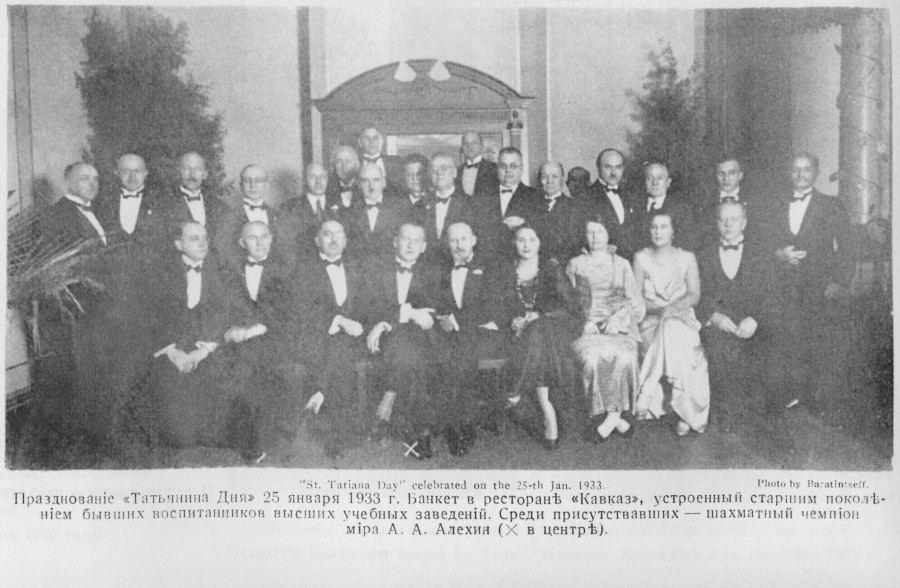 Dinner in Kavkaz, attended by the chess champion Alekhin in 1933.

The following photo is is Kavkaz at its later location on 744 Avenue Joffre. The hospitality of the people of Caucasus (Kavkaz in Russian) is legendary. The sign over the entrance said: "Each customer is god-sent." Kavkaz was famous for its hefty meat skewers. The restaurant had various owners, among them S. Kotenko and Mamikon Kardashiantz. 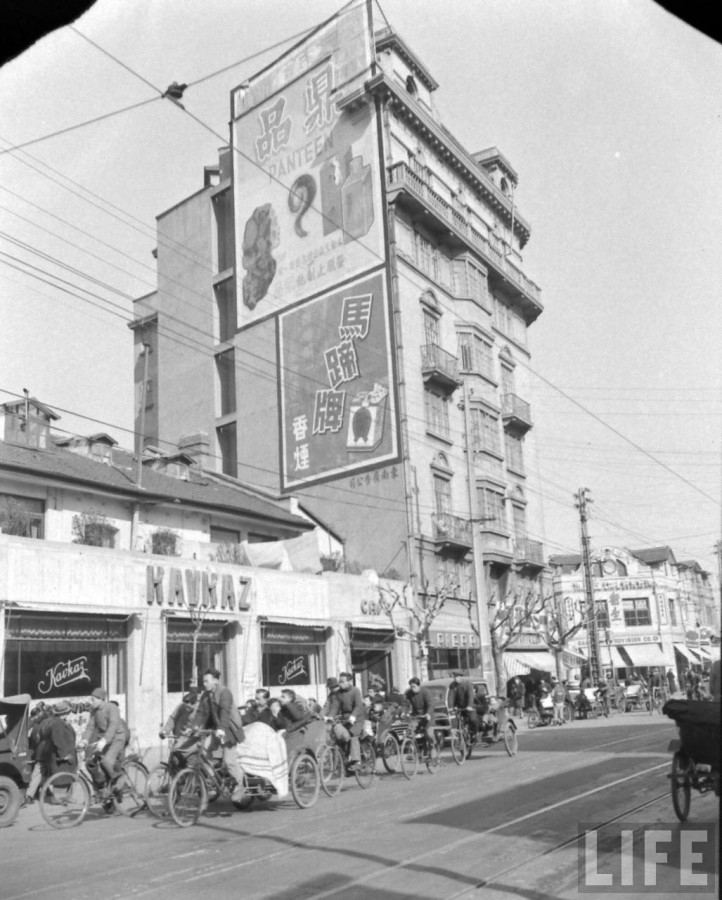 Avenue Joffre; restaurant Kavkaz and Estrella Apartments to the right of it.

RESTAURANT OF THE BROTHERS TKACHENKO
As the largest culinary entreprise of Russian Shanghai, Andrey and Georgy Tkachenko's restaurant empire received a long write-up from Vladimir Zhiganov, the compiler of the almanach Russians in Shanghai. 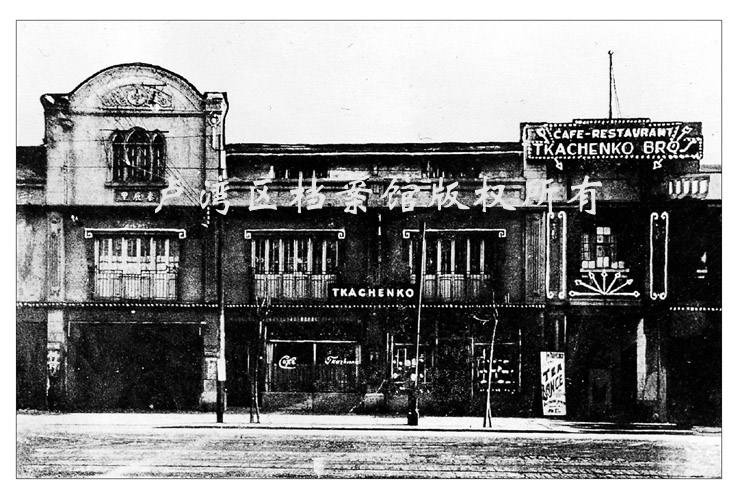 Tkachenkos' small cafe and pastry shop eventually evolved into a garden restaurant with an open-air stage that showed comedies and dance numbers. In 1931 the restaurant moved to a specially built mansion on the corner of Avenue Joffre and Rue Massenet.

Their sweets were famous. Broken and crumbled cookies that could not be sold were donated to the Russian Orthodox Orphanage, to the oprhans' sheer delight. 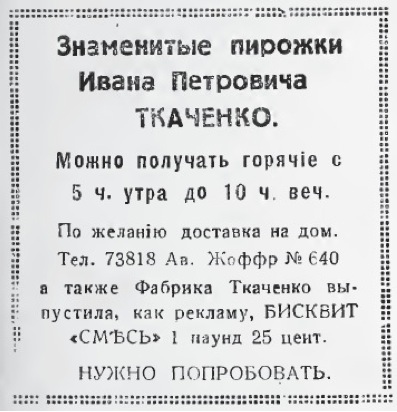 Famous pies from Ivan Tkachenko. Buy them hot, from 5 am to 10 pm. Delivery possible. 640 Avenue Joffre. Also, Tkachenko's factory produces buscuit mix, 25 cents per pound. A must try.
MANCHURIA
Russians didn't only run large expensive restaurants. Machuria was a modest two-story canteen where poor Russians ate on a budget. There is a photo of Manchuria storefront next to the Warsaw Factory (on the south side of Avenue Joffre, between Rue de Roi Albert and Rue Cardinal Mercier), but I am not 100% sure this is this canteen and not some other business called Manchuria. 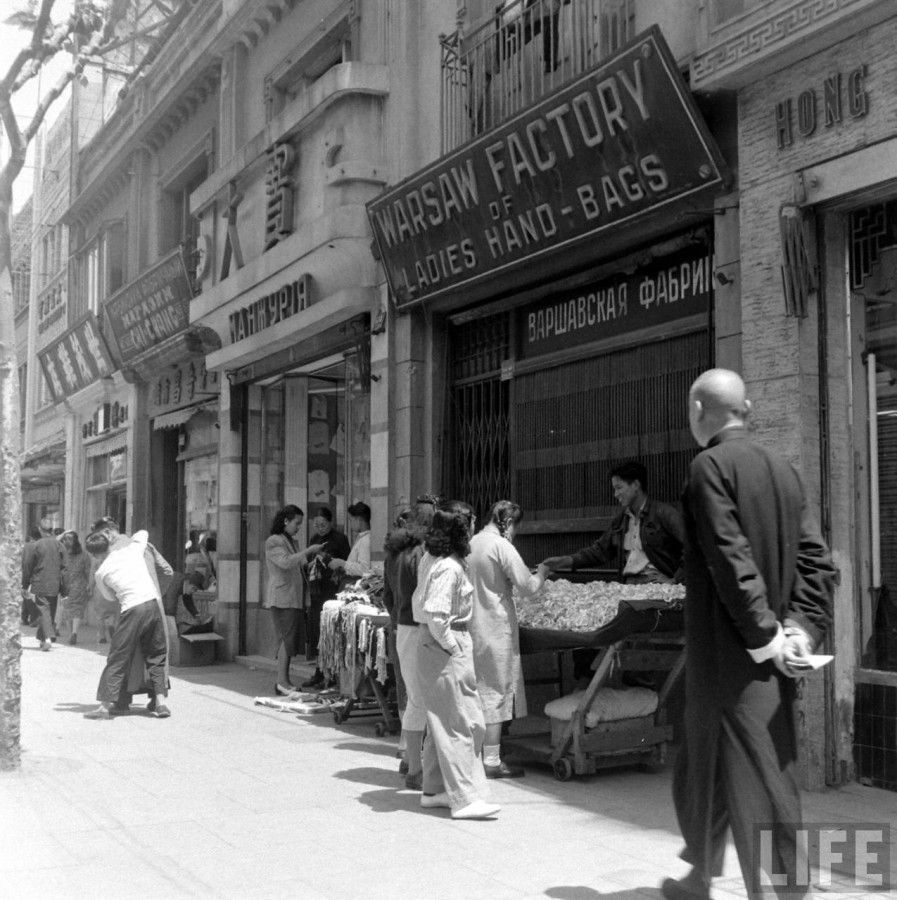 Image of Manchuria (canteen or not?) and Warsaw Factory of Ladies' Hand-Bags, LIFE, 1939

Manchuria canteen was once a site of a gruesome murder: one jobless emigrant (ex-bodyguard) killed another (ex-watchman) with a knife, after a loud argument. It turned out that in the past both men served in the Tsar's army together, and the victim bullied the murderer.
ARCADIA
This was the most popular cabaret in Russian Shanghai, located at the intersection of Rue Doumer, Route Paul Henry and Rue Bourgeat. Not to be confused with Arcadia in Zhang Garden! 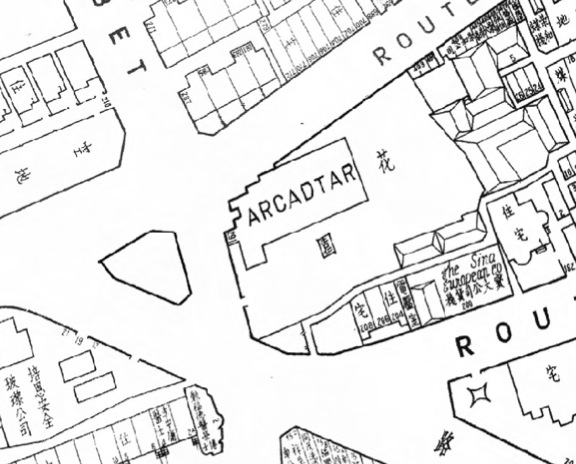 Sir Victor Sassoon visited it at least once, soon after its opening in 1937. The restaurant boasted Czech orchestra and served EWO beer. The owner, Plotnikoff, tried to cut costs by all means available. He raised chicken, ducks and geese in coops behind the kitchen. To further save money, Russian cooks were soon replaced with cheaper Chinese ones, who continued to make excellent borscht, buns, chicken Kiev and all kinds of pierogi: fried, baked and flaky. In the 1940s Arcadia was the site of the Miss Shanghai competition. It also provided the stage for Alexander Vertinsky's performances that always brought crowds in.

Today the building is new, but the energy is still there. 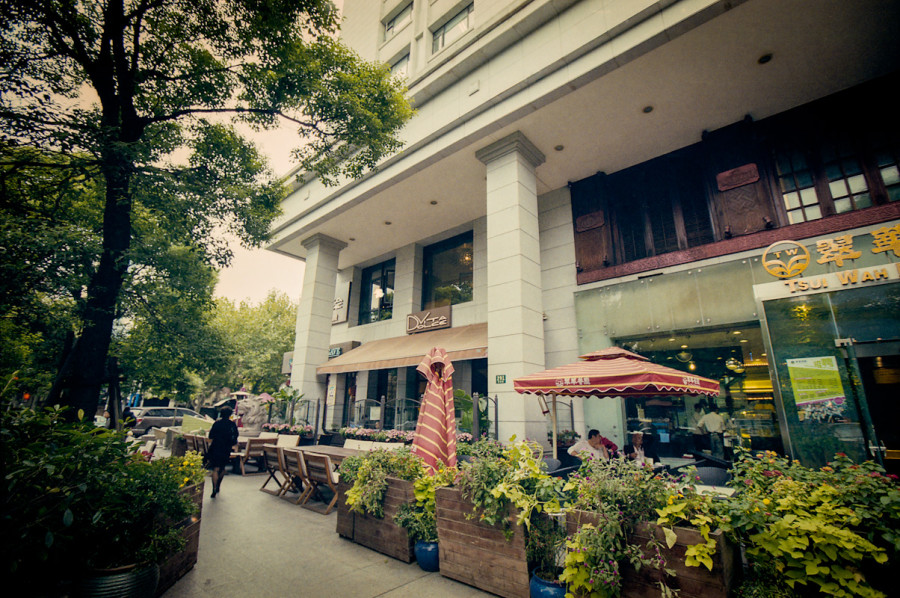 RENAISSANCE
This restaurant was located across the street from Kavkaz, at 795 Avenue Joffre. It was famous for its gypsy choir and dance troupe. On some nights the gypsy band would be missing: they were arrested en masse, down to the last child-acrobat, and held in prison for several weeks in a row – suspected to be expert thieves as well as entertainers. The imposing doorman was a local celebrity: he was a former army Colonel and spoke five languages fluently. 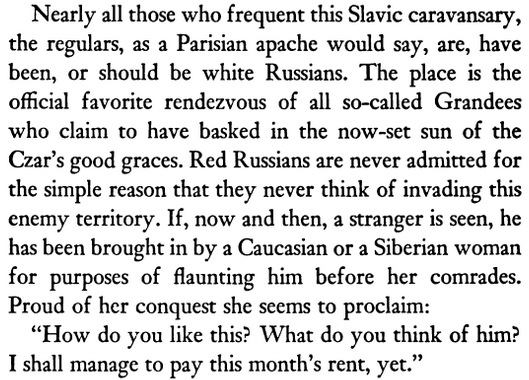 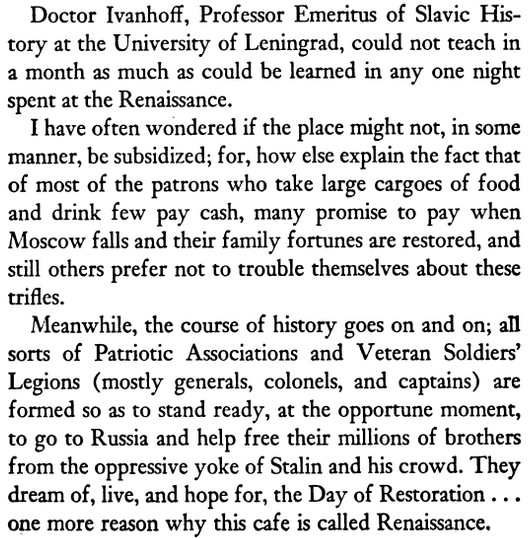 Renaissance was not a pretentions place. The owner, a Russian Armenian (again!), was a patron of arts and provided a room for the meetings of Shanghai's poets, writers and artists; the room received a name Bohemia. Vertinsky performed in Renaissance most of the nights. Between songs he went to toast each table and ate with the guests, and in the mornings the artist could count on a free breakfast. 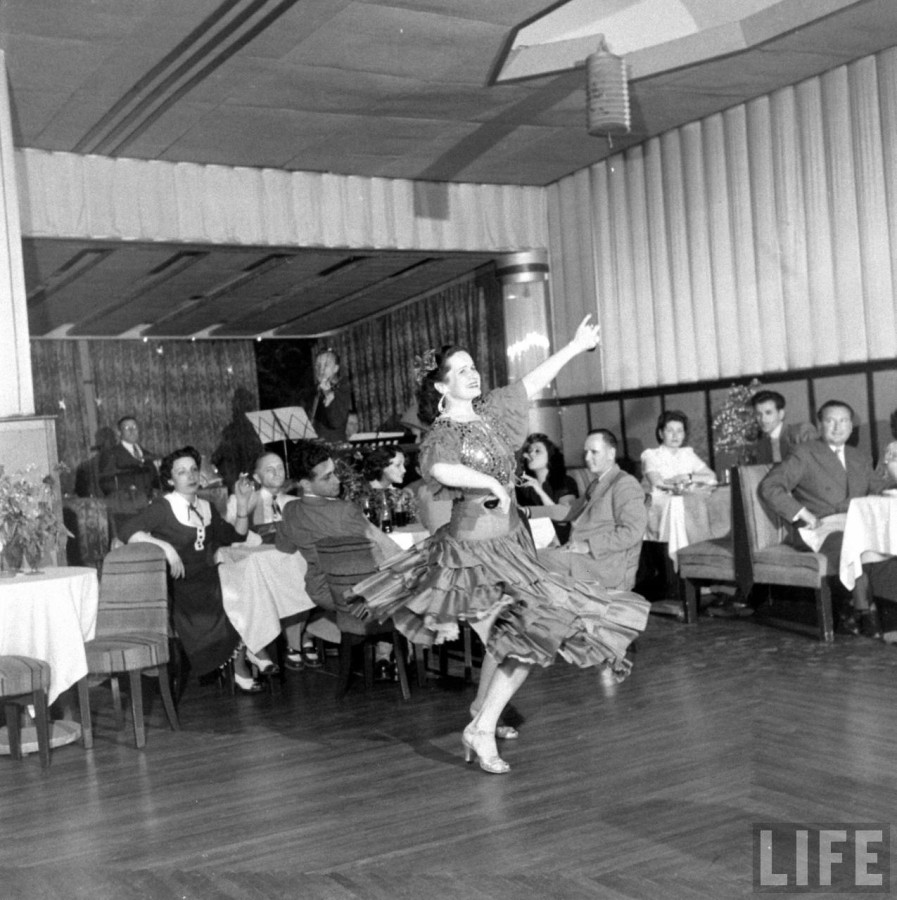 UPDATE: I was mostly relying on Natalya Ilyina's accounts of Renaissance, and it turns out she was wrong in stating the owner was Armenian. He was Georgian; his business partner owned Kavkaz on the opposite side of Avenue Joffre.

DD's
This cafe and restaurant on Avenue Joffre, next to Renaissance, was immensely popular with Russians, Westerners and Chinese alike. The French owner's name was Lanusel, and he was smart enough to hire estranged Italian cooks from the ship Conte Verde that sunk at the mouth of the Huangpu River. The menu had beef stroganoff, fries, Gurvitskaya kasha (a variety of semolina pudding, with dried fruit and jam). One author was particularly impressed with meat skewers that a skilled waiter cooked on open fire right next to your table.

This list is far from exhaustive. Every nightclub, bar and cabaret had a restaurant. For a Russian these categories are mixed anyway. Going out means going out, all the way, all night long. New restaurants opened, made the headlines and closed within several months. Scheherazade, Mexicana, Alcazar, Yar, Green Room, Jose, Kuzmin's Garden Restaurant (affordable in spite of its name), Gascogne, Santos... The list goes on. 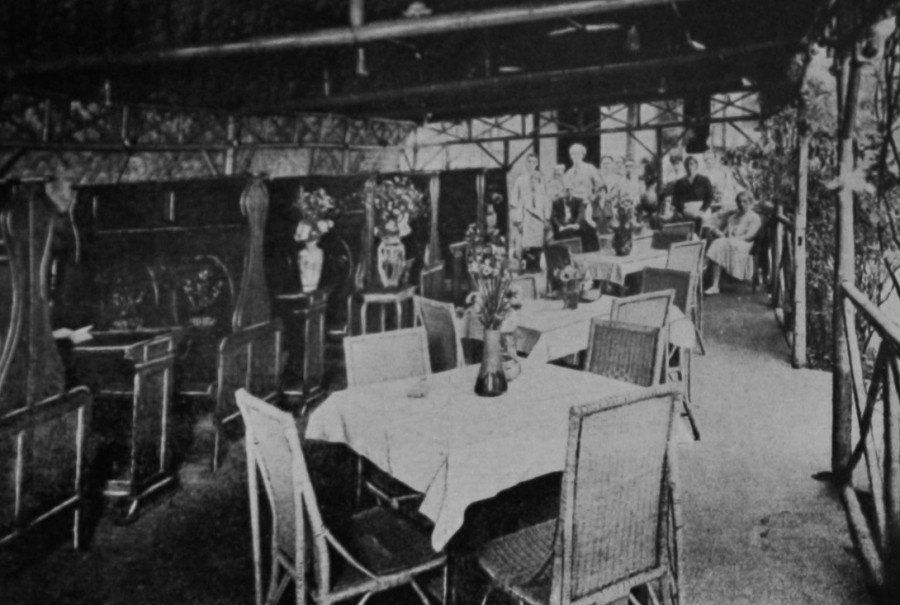 In 1937 the singer Vertinsky opened a restaurant called Gardenia, on Great Western Road; it closed three months after the big opening. 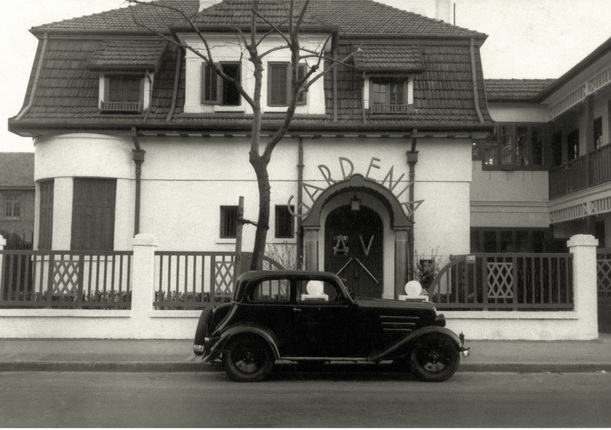 Palace Hotel Tearoom had a Russian pastry chef; thanks to his sweet concoctions it became fashionable to be seen sitting in large glass storefronts and having afternoon tea. The Russians considered Kyriaco Dimitriades, the owner of the famous Astoria Confectionary, one of their own. Soviet Club, the propaganda arm of the USSR Consulate, had an excellent restaurant. Patrons were admitted only if they wore a tie (they could rent them from the club's secretary). Tchakalian's French Bakery (another Armenian!) survived to this day as Lao Da Chang, a Chinese "old brand..."

I think a post on Russian tea-rooms, confectionaries and bakeries is due. 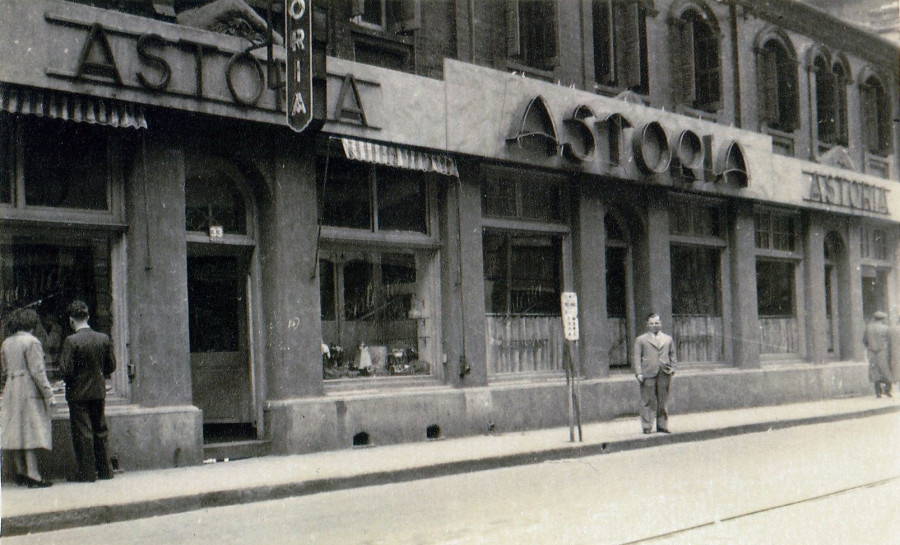 Photo from Daphne Skillen's archives, from a story here.
Collapse