Shanghai boom a bust for residents (1995)

Back in 1995, when journalists were not yet habituated to Shanghai-style redevelopment – and not readily complicit with everything China does – such articles would be published. Now you can't even find them on the web (I found this on ProQuest, by chance).

The Globe and Mail

Shanghai boom a bust for residents

Lao Wang looks across his tree-lined street and no longer sees the apartment block where many of his friends once lived.

Instead, there's a gaudy green-and-yellow billboard surrounding an immense field of rubble. Soon, it blares, this will be the Hong Kong Plaza, a vast complex of expensive shops and office towers.

The mass destruction is all part of Shanghai's ambitious, multibillion- dollar urban-redevelopment scheme, designed to propel the city into the 21st century as one of the leading commercial and financial centres in the world.

But for several hundred thousand residents, the breathtaking pace of development has taken a harsher toll than the loss of a few Art Deco treasures. It has cost them their homes.

Entire blocks of brick tenement housing put up years ago by Westerners are being demolished, their long-time occupants uprooted to lacklustre apartments in far-off suburbs. The evictions are often brutal, with little advance notice.

A Canadian living in Shanghai tells of seeing walls torn down, exposing families still inside, huddled around their furniture, refusing to leave.

Lao Wang fears his compound may be next. At the thought of having to leave his home of 30 years, the retired government official puts his hand over his heart.

"I would be very upset. This is my neighbourhood. There is a market here. I can buy my vegetables. When I think about moving, it gives me nightmares. A lot of my friends have already gone. It is all very sorrowful."

The situation already has sparked one of the largest spontaneous protests in Shanghai in years. Hundreds of residents blocked the city's ritziest shopping street on two successive days last month. They had just been told by civic officials to be out of their homes by mid-June.

"Old people will die if they are removed to remote places," one resident told a reporter. "The government does not care whether ordinary people live or die. All the government wants is money."

After years living in the centre of one of China's most vibrant cities, few are attracted to the dusty desolation of suburban life, with poor transportation, few amenities and often unfinished apartment buildings, despite promises of more space and indoor plumbing.

"It makes people very angry to have to move," said a local worker, whose former residence was demolished to make room for the city's new subway.

"I used to be able to walk to work. Now, I am 10 kilometres outside the city. The bus takes forever. In the morning, you get on the bus, eat your breakfast and by the time you get off the bus, you're hungry again. It's harder work riding the bus than being at work."

The growing resentment is a classic example of what happens when grandiose urban plans run up against the reality of ordinary people. During their protests, many expressed anger at being displaced to make way for luxury projects catering to China's growing wealthy elite.

"We have to make renovations if Shanghai is to be an important financial, economic and trading centre," he said. "Old buildings that cannot be repaired must be torn down. We need new buildings for Chinese and foreign companies that want to do business here."

Low-cost housing in the midst of Shanghai's glamorous, future heartland is not part of the plan.

Lao Wang pays only $5 a month for the small, three-room apartment he shares with his son's family. The flat, on the first floor of a row house, has a thick, oak door and hardwood floors, but no bathroom. Cooking facilities are crammed into a dark passageway.

Yet the house is part of a pleasant compound cut off from the street by a thick stone wall. A well-swept lane runs down the centre, with a row of carefully tended gardens on either side. Before the Communist victory in 1949, the apartments housed employees of one of Shanghai's many foreign- owned banks.

Toronto architect Carl Hall, working here for the past 18 months, said it's a shame the city is not making more effort to preserve such housing.

"There are lots of nice half-timbered buildings still around. It wouldn't take much to make them better," Mr. Hall said.

"I think there's always room for good things to be preserved, but the average Chinese developer doesn't seem to care. They want to make their dollars and that's it. They build it, sell it fast and get out."

It's also true, however, that 45 years of neglect have caused many once-stylish apartment blocks to crumble beyond repair. They've also suffered from perpetual overcrowding, as previous Communist officials tried to solve the city's chronic housing shortage by cramming as many families as possible into the buildings.

In fluent English learned from U.S. sailors during the Second World War, Mr. Zhong said he'd love to get out.

"People who live in small places want to be moved. They can get 20 square metres of space. Right now, there are three of us sharing six square metres," he said.

"Those who live in bigger apartments don't want to move. But me, I'm willing. Besides, it's no use to argue with the government. We had demonstrations in 1989. Now, it's not possible."

Mr. Jiang, the vice-mayor, said most residents welcome the prospect of more room.

"Maybe they will have to be moved a little bit, but their living space will be greater," he said. "That's why we think moving even quicker to renovate the city is a good thing for people. They are moved to new homes and they are very happy about that."

Mr. Jiang acknowledged the recent protests, but blamed the city's failure to adequately explain its actions to people.

"So on two nights there were citizens gathered around the streets discussing things with each other and they blocked traffic on the road," he said. "But after the city government had a long talk with them, they understood the city's policy better, and the problem has been solved."

But a recent tour of the doomed housing complex found police patrolling the area, and no one willing to talk.

Mr. Jiang said officials are now more sensitive to residents' unhappiness over having to leave the friends, neighbourhoods and homes they've known for 30 to 40 years.

"We should try to do things better. Let people know the details of where they are being moved to and what conditions are like there. But it's a very complicated job. These things will happen some time."

The vice-mayor added that he understands how many Shanghai residents feel.

"In the old days, Shanghai people had a saying. They would rather have one bed in the centre than a whole house in the suburbs. Today, you still have people willing to squeeze into one small room just to stay in the city."

All material copyright Bell Globemedia Publishing Inc. or its licensors. All rights reserved.

Two days of spontaneous protests downtown, my lord! What a free society.

I expected Mr. Jiang would be in jail for corruption schemes, but it appears he had a lucrative consulting position in the government as late as 2008. So it is to him that we owe the destruction of these blocks, now built up with towers, incuding Hong Plaza mentioned in the text. 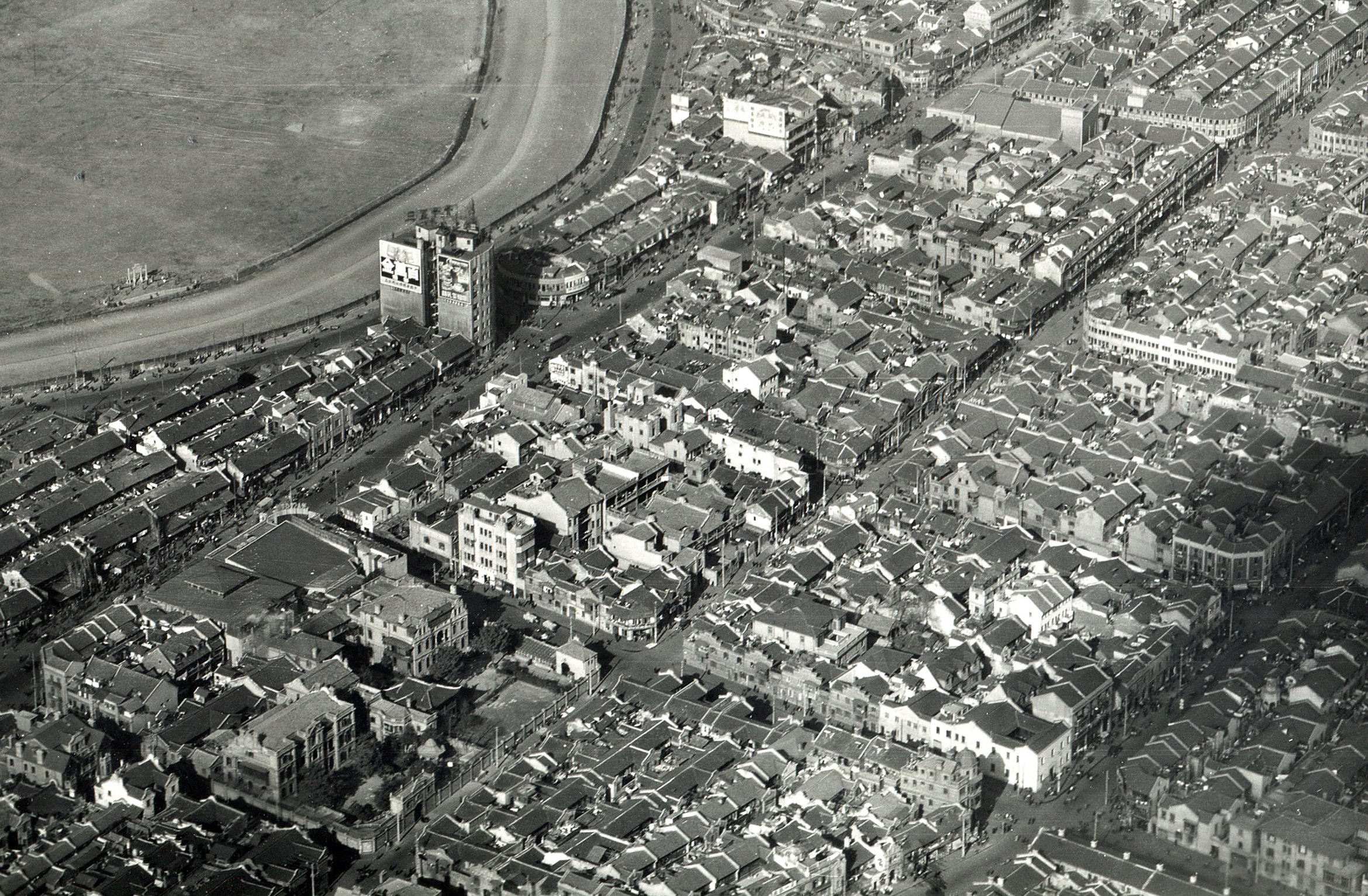 South of the Racecourse, between today's Yan'an Road and Huaihai Road. I wrote about this neighborhood here. Image: Flickr Cities in old Days.

Posts from This Journal “redevelopment” Tag