Found this curious article from 1982, published in The New York Times. The journalist caught the Seamen's Club when it had already left the building of the former Shanghai Club (destined to become a hotel), and moved into the former Soviet Consulate, that was exactly taking a (forced) break from diplomatic business between 1962 and 1986.

SAILOR'S LAMENT: WHAT DID THEY DO TO SHANGHAI?

Once Shanghai ranked among the world's rowdiest ports of call, with a licentiousness that outstripped even its own reputation.

A sailor on shore leave found no lack of diversion, from gambling casinos like Delmonte's or Farren's to nightclubs and dance halls like Ciro's or Roxy's, which normally closed at 6 A.M. but would stay open later if the patrons requested it.

Sleazier sport was found in the countless dives, opium dens and brothels near the waterfront. Beggars tugged at the jackets of carousers prowling the red-light district off Fuzhou Street and sailors settled quarrels with knives in ''blood alley,'' under the indifferent gaze of hard-eyed young prostitutes.

Muggings were commonplace. And the practice of bashing a tipsy sailor unconscious and sending him out involuntarily on another ship occurred often enough to spawn the expression ''to be shanghaied.''

But Asia's most notorious dens of vice closed down after the Communists took over Shanghai in 1949. Some 30,000 prostitutes were packed off for re-education and several hundred thousand opium addicts were detoxified. The old racecourse was razed to make way for a people's square and park, with only some bleachers left to evoke the thrill of a bet on the right horse.

Communist morality has turned Shanghai into what may well be the world's most prudish major port of call. ''If it was paradise, it was only for adventurers,'' said Gu Yiping, director of the Shanghai International Seamen's Club. ''For other people, it was hell. Our Shanghai people suffered a lot.''

Mr. Gu is responsible for entertaining sailors when they reach China's biggest port after a long voyage. His club, which was founded in 1950 as the seamen's home, works hard to provide wholesome fun.

''Recently we sent some chefs to American ships to let them have a taste of Chinese food,'' said Mr. Gu, who explained that it was not easy to ferry Chinese cuisine across the harbor. The chefs, who were used to cooking with gas, were also upset to find the galleys equipped with electric stoves.

''But we solved this difficulty,'' Mr. Gu reported. ''That was a specific demonstration of our friendship with American friends.'' The seamen's club, which is housed in the elegant old Russian Consulate on the waterfront where the fetid Suzhou Creek pours into the muddy Huangpu River, hardly lacks for business, visited by 30,550 Seamen in 1981. 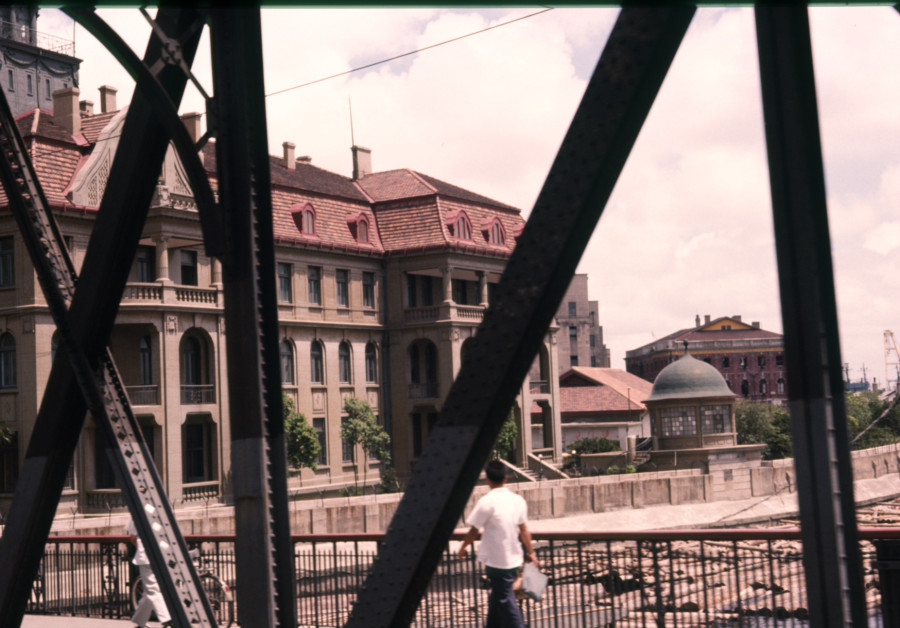 Shanghai now handles 85 million tons of cargo a year. Last year 30,550 seamen from 85 countries sailed in on 1,135 foreign vessels, Mr. Gu said. His club tallied up 90,000 separate visits. It is now expanding by building another 12-story building next door.

Sometimes the seamen get a bit out of hand. In a brawl last August about 20 sailors demolished the ground-floor bar at the respectable Shanghai Mansions Hotel just down the street from the seamen's club. One Shanghai resident described it as a ''Hollywood-style punchup'' with policemen being flung through plate-glass windows when they arrived to restore order.

Municipal authorities reacted by closing down the coffee shops and bars of Shanghai's three major hotels. Now a sailor can get a drink only in the paneled bar of the seamen's club, which opens at 5 P.M. and closes at 11 P.M. The bar serves ice cream sodas and pineapple ice cream along with alcoholic beverages.

The bartenders keep a solicitous watch over their charges. ''We are not capitalists,'' Mr. Gu said. ''We don't try to make them drink too much. We want to preserve their health. We want to love and protect them. The majority of seamen understand our rules.''

Mr. Gu, who was never a sailor himself, has no nostalgia for the bad old days. Today a seaman rarely gets robbed in Shanghai, he said, while ''it was a common scene before liberation.'' He added, ''I saw such rascals myself.'' The ban on prostitution extends even to casual fraternization between foreign seamen and local women.

''After liberation the prostitutes were given medical treatment and were taught special skills to make a living, so they could find jobs and get married,'' Mr. Gu recalled. ''Of course most of these people were innocent. There was nothing for them in the countryside so they came to the city, but there was no work for them here.''

If seamen stay ashore too late to get back to their ships they can sleep in one of the club's 40 tidy beds for about $4.50 a night. Before retiring they can visit the club's reading room, which is stocked with copies of Beijing Review, China Reconstructs, Social Sciences in China, and other publications of an ideologically uplifting nature.

Mr. Gu led a visitor on a tour of the club's facilities, which include a table-tennis table, three billiard tables, a chess room and two small restaurants. The hall displays photographs from the recent 12th Communist Party congress. There is also a shop selling guitars, stuffed animals and local souvenirs, all at prices that Mr. Gu said were cheaper than in the hotels.

''We don't intend to make money deliberately,'' he explained. ''We make just enough to support ourselves.'' The employees outnumbered the seamen in the club, but Mr. Gu explained that it would get busier later that evening. Outside the bedrooms a sailor in dungarees slouched in a chair staring glumly into space. In one restaurant a half-dozen other men lingered over their cups of coffee.

Mr. Gu acknowledged a risk that the seamen might import their own Western decadence into Shanghai. He said that the club ran regular education sessions for its employees to inoculate them against bourgeois contamination.

''We have an open door policy but we can resist their way of life,'' explained Chao Bufa, an earnest young staff member. A large display case in the foyer, lit up like a jeweler's window, offered lost items for sailors to claim when they next reached port. As proof of Shanghai's vaunted new incorruptibility, the display included, along with some umbrellas, sunglasses and dolls, a disposable all point pen.

Top image of the Bund: Harrison Forman, 1973, AGSL Collections at UWM. Second image: The building of the former Soviet Consulate in 1976, uploaded by Editors CJ on flickr.